For guitars of the straight waisted variety (or reverse offset).
Post Reply
9 posts • Page 1 of 1

I mentioned in the Good Things thread that I'd bought an old guitar which I'd wanted pretty much since I started playing at 13 or so. That's 14 years ago now, and I sometimes feel my guitar collection has grown more than my playing has, but this was one I had to own at one point in my life. 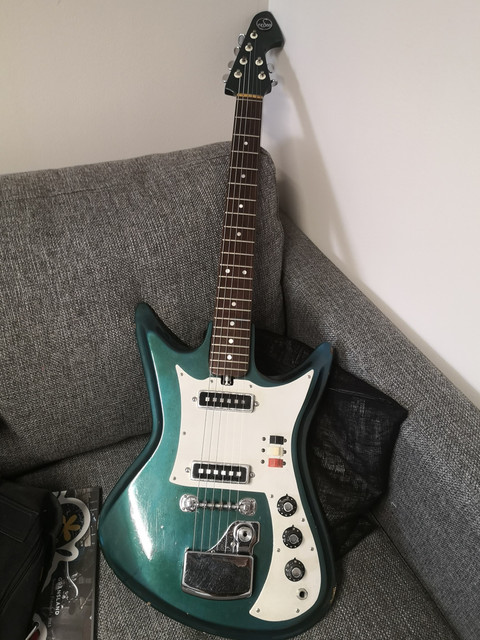 I remember seeing the video for Rocket by Smashing Pumpkins (back then hands down my favorite and most listened to band) and James Iha was wearing like a silver space suit kind of thing and playing a guitar that looked equally spaced out. Aesthetically, I don't think there's any guitar out there that captured the 60's space-electricity-aerodynamics-glam-thing that rock had going for it as well.

It's a Teisco ET-230 or K2L, although I think the latter might be the model name for the same guitar branded Silvertone. The finish has turned almost Sherwood Green from the cool blue it was back in 1966. It's got the matching headstock, the so-called Swan-logo which indicates it was made for the domestic market (I did also buy it from Japan and it got here impressively quick) and the tailpiece cover, which I understand it's pretty rare. All the features I wanted the most, and I got it for like half the price of what I see some of these listed at. It also came in a period-correct faux-leather softcase in a weird oxblood kind of colour as an extra, unadvertised bonus.

I haven't had the time to try it out yet as I'm at work, just tuned it up to see that everything checks out, and the neck is straight, the action low and the intonation is on point. The frets are low and have some divots on the upper frets, but I get no buzz, and likely they'll have some more years left in them. Condition overall is a bit rough, but shit, it's 55 years old. I even have a vibrato arm at home which looks the part of the original one! The stars have all aligned

Re: NVGD! One I always wanted

One sharp guitar, in every sense of the word! Enjoy it.
Top 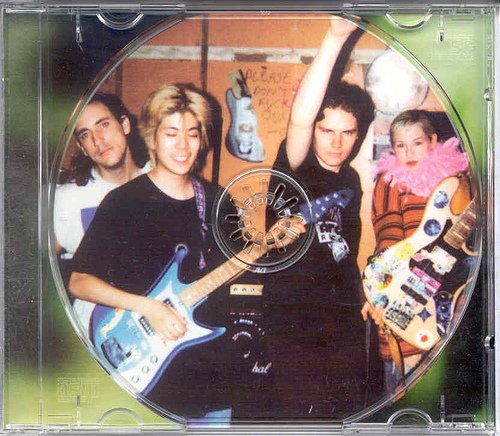 Awesome! Such a cool looking instrument. Eastwood had a cool “reissue” that I remember pining over when I was younger.

Those square pole pickups have a bit of a cult following as well.
Top

Love it! and that headstock is awesome.
Top

After having it for about a month now I can definitely say that the cult following around the pickups is well deserved. They sound as good as any other type of pickup I've ever heard, and without almost any hum. A surprising lot of versatility, where you can get the dirty garage filth blues of guys like Jack White, Dan Auerbach and Josh Homme, some sweet grunge and alt-rock tones and even some pretty convincing jazz sounds with the neck pickup and rhythm circuit engaged. The acoustic tone is great too, warm and with lots of sustain despite the seemingly tone-murdering bridge/vibrato-combo. This is, in a lot of ways, simply the Japanese Space Jaguar.

It is probably going to need a re-fret to really be a keeper though, but I'm thinking that will probably be worth it down the line.
Science Friction burns my fingers
Electricity still lingers
Top

Most definitely. I have two of them (one still basically stock, one not) and I wouldn't be without them. They have some shortcomings, (frets and fingerboard particularly) but they can be worked out- the design and sound more than compensate IMO. I actually prefer the square pole pickups over Teisco's more famous gold foils. You did well to find one still with the tailpiece cover, they are hard to find- I looked for a long time and had to bid hard to get my hands on one for one of my guitars. EZPZ on eBay is a source for repro arms if you need one.
Good score, congrats!

My brother has kinda collected a bunch of these, I've so had some and yeah they're great!

BTW I believe I still have a vibrato arm or whole tailpiece, in case you need it and are in the EU...
i love delay SO much ...that i procrastinate all the time.
Top
Post Reply
9 posts • Page 1 of 1