For guitars of the straight waisted variety (or reverse offset).
Post Reply
11 posts • Page 1 of 1

Hi there,
A little more than 6 years ago, I got an 8-string guitar from a metal-playing acquaintance, and to see if I'd end up using this kind of guitar or not.
After all these years, this poor guitar has lived mostly on its stand or in the gigbag, only taken out once in a while to tinker on it (wiring, setup, new strings, stickers..) but never really used, so I figured I'd put it in the local classifieds and see what people would offer me for it.

Fast forward a few months, and someone offered me a straight trade, saying he had either a bass or a guitar. He brought the instruments at my place to do some playing, trying out everything etc.. And then the guy was so excited about playing the 8-string that he insisted I take both instruments, saying they took up too much space for him, etc etc.

So I basically got a normal trade + a free instrument, not going to complain ! 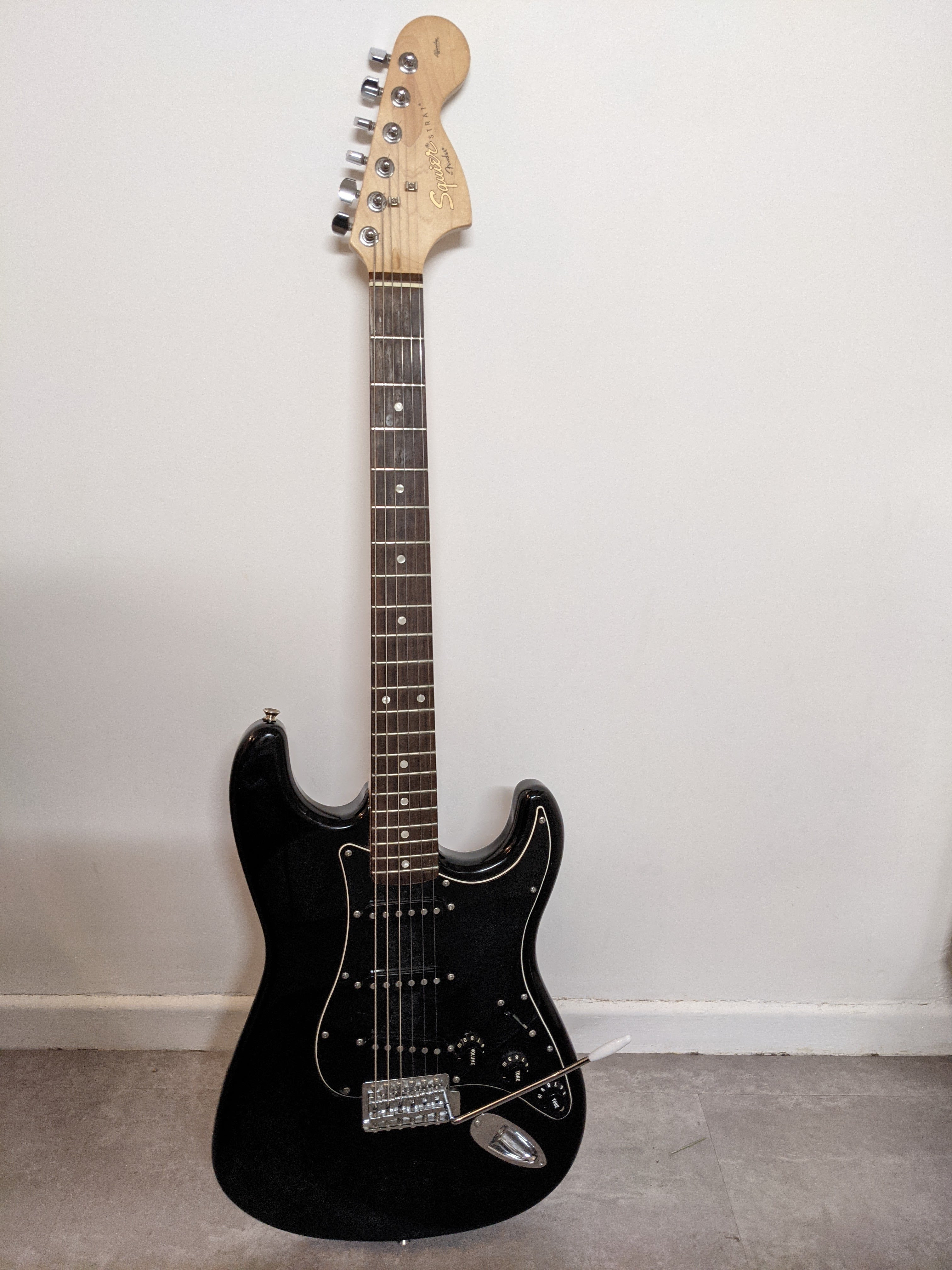 Squier Affinity Strat.
When I was in high school I somewhat hated strats, associating them with late period Clapton, old guys in cover bands, and cheesy 80s pop. Now I'm over 30 and love the sound of many strat users, so I was pretty excited about owning a strat for the first time, even if it's a cheap copy.
It plays nicely, the neck and middle pickups sound OK to me, but something needs to be done about the bridge pickup. I have a hot rail style pickup in my parts bin, I might also try to put a tele bridge pickup there but it's a bit soon to already enlarge the pickguard holes, etc..
It also needs new tone pots, and maybe an upgrade of the switch. I don't really like the modern tuners on fender headstocks, but they work, I'm not gonna complain here !
I also managed to set the trem to floating on the first try, not the most stable of things but very fun to use ! Now to do all these Belew-style Talking Heads leads...
A small downside is a weird cardboardy-feeling when you play it, I don't know what causes it but I've encountered it on some cheap guitars before..


And the second part, the NBD :

A Stagg Jazz Bass copy. If you're unfamiliar with the brand, Stagg makes very entry level instruments, you might often see them in second-hand stores, and the quality varies wildly.
This particular bass is pretty nicely finished, the neck is straight and the body has no visible blemishes, but : it's very heavy.
At some point someone changed the nut for something that's too narrow, I suspect they ordered a jazz bass width but this seems to be more in the ballpark of a precision size -I already ordered a correctly-sized nut.
The electronics sound fine, I don't really have a bass rig to judge but its good enough for what I do. Also never had a bass with flatwounds, it's pretty fun !

The only upgrades/maintenance really needed now are putting some new foam under the pickups, as they wont stay up, and probably shimming the neck very lightly.

The funny thing is that the only bass I played for the last ten years is an half DIY job, also with a Stagg neck. I was complaining that it was too big and too heavy, as I have a bad back and I recently joined a band as a bass player, but now I have a standard-sized bass and it's the same size, and waaaay heavier... I will try to find a way to weigh it to see if it's really overweight or if I'm just a tall weakling

For fun, my old DIY "too cumbersome and heavy" bass next to the new one, that's exactly the same kind of unwieldly but also heavier : 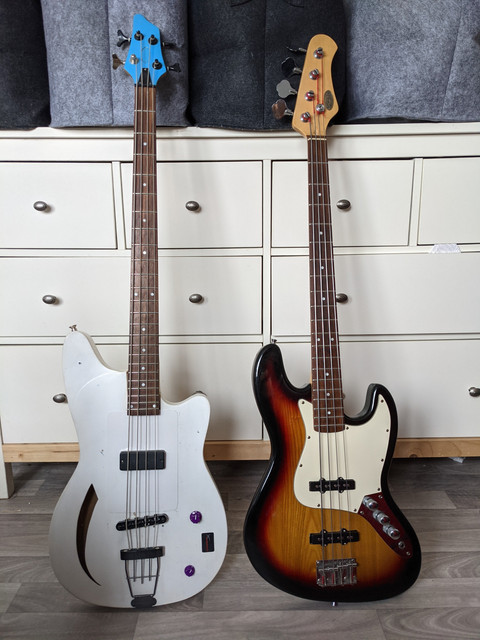 
Flurko wrote: ↑
Fri Mar 05, 2021 2:16 am
I have a hot rail style pickup in my parts bin, I might also try to put a tele bridge pickup there but it's a bit soon to already enlarge the pickguard holes, etc..

Q pickups makes a Tele-for-Strat bridge pickup that I put in my Squier Strat without having to make any changes to the pickguard. I know the addition of a baseplate isn't supposed to make a noticeable difference, but it really does sound more like a Tele bridge pickup now, so whatever he did to make it more Tele, it worked. Only cost me €45 too.

Personally, I'd also rewire it with a blend knob, like so: https://www.premierguitar.com/articles/ ... ratocaster
Having a master tone makes more sense anyway, plus I find the bridge + neck setting more useful than position 2 and 4 in standard wiring.
Top

I will do some reading about blend knobs etc, but I'm leaning towards master volume/master tone/master bass cut ala G&L PTB, I've always wanted to try this kind of wiring.

I did a quick weighting of the bass with my kitchen scale, so it's probably not very accurate but it seems very heavy for a bass, at a little over 5kg (around 11lbs for our US friends). I'm already thinking too far ahead and considering asking how much the JB bodies some sellers have on local classifieds weigh

, that's not an endeavor I'm ready for right now !
Top

I tried the G&L S-500 wiring scheme before to get the bass cut, but I found the Reverend style, actually this modified-Reverend option, a better option. The G&L system requires sourcing special parts too.
https://www.youtube.com/watch?v=yVC-Fj9Lz-s

I use the Armstrong Blender on any Strat I get. Wiring only mod where the second tone knob blends from stock SSS so I keep all the tones for keeping a Strat around anyway into HSH which with the blend can cover low gain PAF tones on up to Super Strat hot humbuckers.
https://www.youtube.com/watch?v=eKA_Q6MmdZU
https://www.youtube.com/watch?v=lWF1L7GBYfU

If you just want a Strat to give you the Tele neck+bridge option, an easy way is swap the neck and middle pickup either in the pickguard or their hot leads at the switch. You give up the #4 Quack, keep the #2 Quack that is used in more popular songs, and get the Tele 3-way switch operation +2 middle combinations. I've tried the '7-tone Strat'/'Gilmour Mod' too for a while but swapping the pickups this way is more useful and no extra toggle switch holes in the pickguard. It was fun for a while but then I found the Armstrong Blender and haven't gone back.

Ah, but if it’s the one that shows up when I search, it’s wound very hot and probably not a good match for your other pickups. Better figure out what you need, send him a mail, and he’ll make you one that matches the others for the same price.
Top

After more than 30 years of playing, I still don't know what "quack" is...

And that is whack!

And that is whack!

As best as I can describe it, it's the sonic quality of having certain resonances in the upper midrange, scoop in the lower midrange, and distinctive phase cancellation due to the Strat's pickup placement/design and the way said pickups interact in a passive circuit, leading to lower output, perceptibly brighter tones, and that resonant upper mid peak.

I can't define quack either, its a word I would apply to the in between strat sounds but also to out of phase pickups, or the middle of a wah's travel. But everyone of these sounds has their use !

Playing this strat more and more, I'm really happy i didnt have a strat tremolo when I was learning the guitar, I would have spent every day making funny sounds with it instead of learning the notes/chords etc ! I can't believe people have been able to make those funny effects since the fifties. Now I want to try a guitar with a floyd rose to see if I can make even sillier sounds.
Top

I think I will sell the bass, it looks good but is way too heavy for my bad back, and doesn't sound or play any better than my mongrel hollow body bass. At least now I know I like flatwound bass strings !

For the strat :
I bought a red tort pickguard on ebay, and fitted a tele bridge pickup to it.

I just have a problem with the wiring : I wanted to adapt this rothstein diagram : 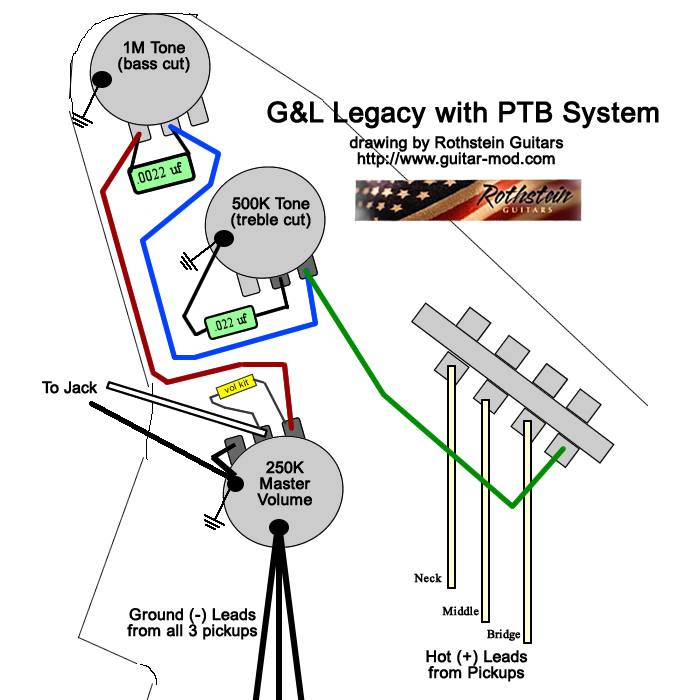 But my switch is an "import" one (see pic below), with 9 connectors in line. My two tone and bass cut knob now behave in a random way, I must have done something wrong. 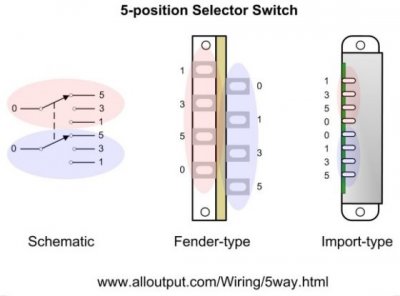 Does anyone know how to wire that to have a behaviour similar to the rothstein schematic ?
Top

A quick picture to show the only success of this mod yet, the pretty cool red tort : 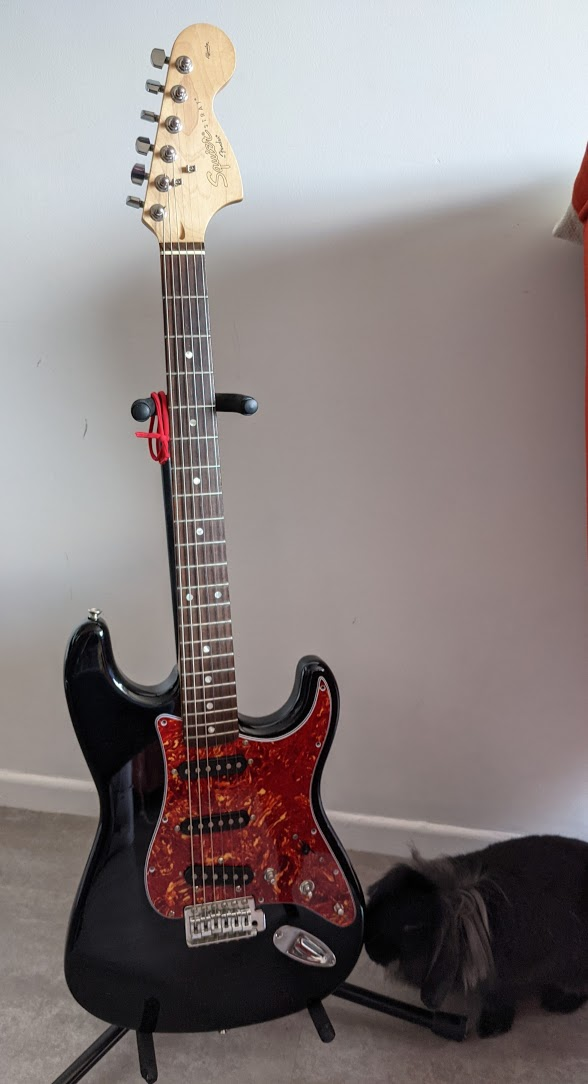 Blaze isn't convinced, mostly because her nap was interrupted by me slightly moving the guitar stand : 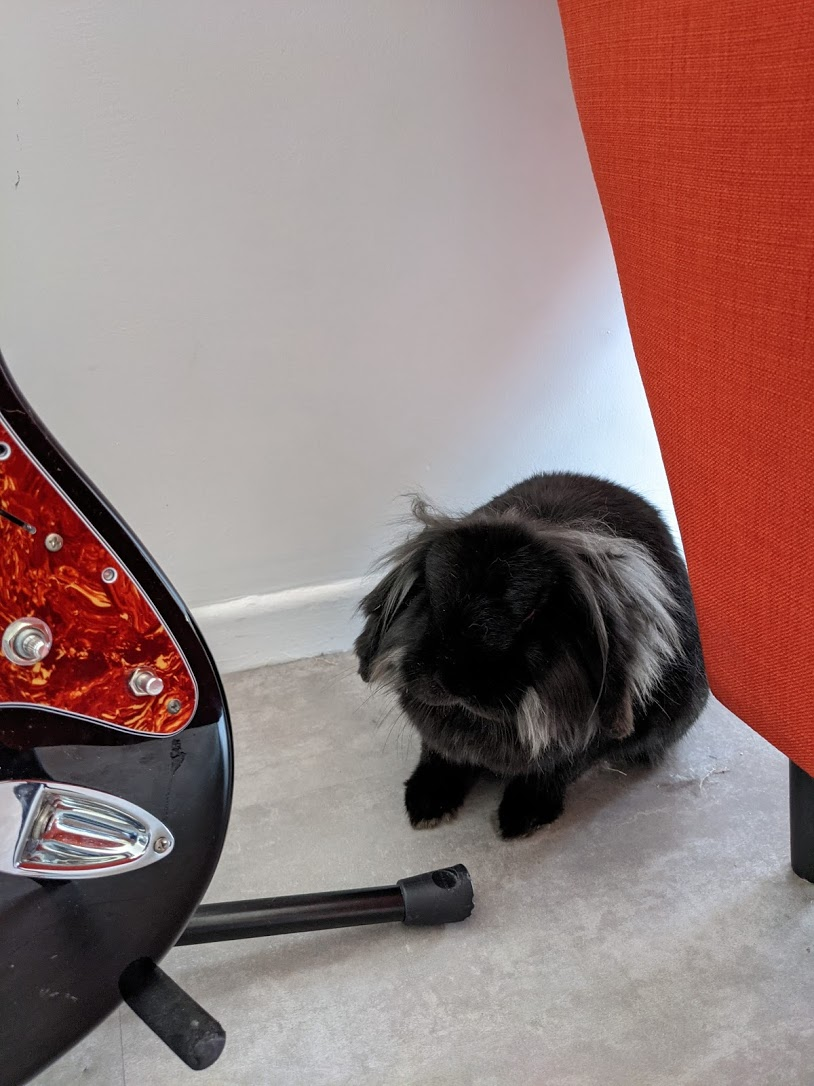 edit : I think I figured the problem out : everything seems to work as planned, but the bridge pickup, a GFS tele bridge, has such low output compared to the stock squier ones (with a magnet underneath the poles) that the effect of the bass cut and high cut pots is barely noticeable in comparison.

Also I had swapped the stock volume pot for one in my parts box with smoother action, but it seems damaged : it doesn't cut off the sound completely, and makes scratching noises all the way down.
Top

The replacement volume pot I wanted to use was broken and I had to replace it by the original one, but I like the tele bridge pickup that's in here now.
It's just a random pickup I had lying around, with a big magnet underneath, but it adds a lot of bass to the bridge position. The bass cut off pot becomes also very useful with it, I wonder if in the future I might wire it to act only on this pickup. 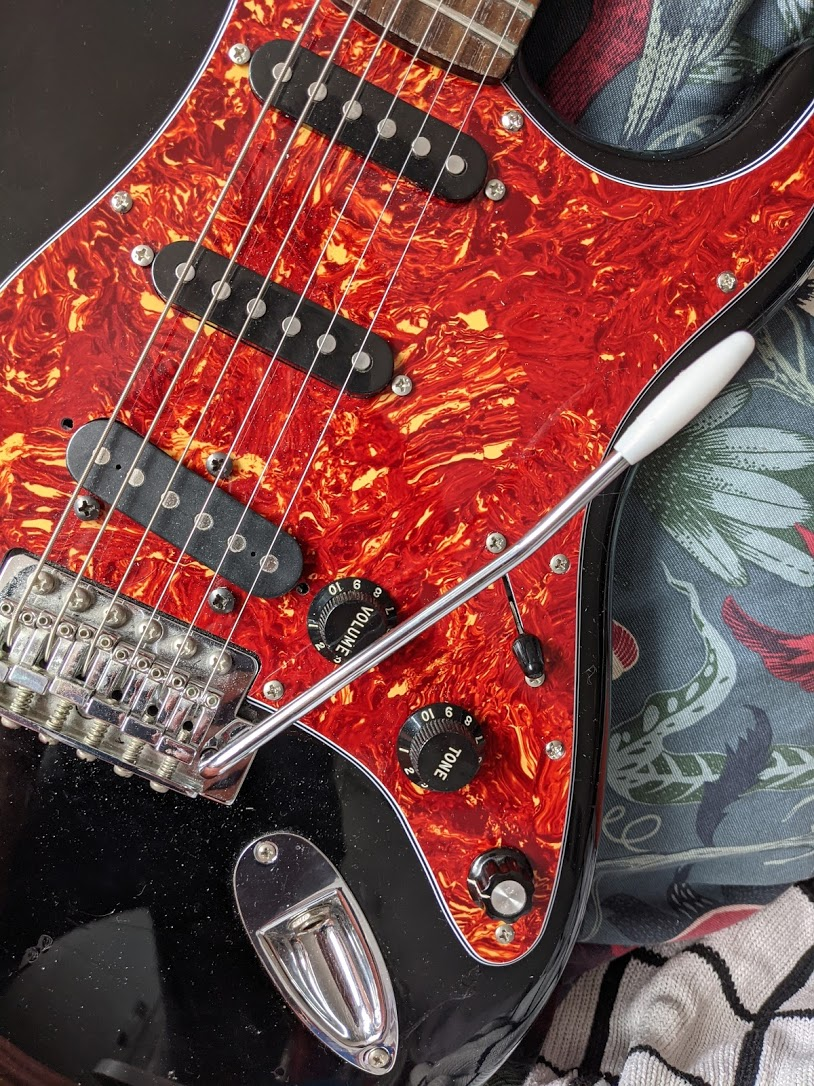 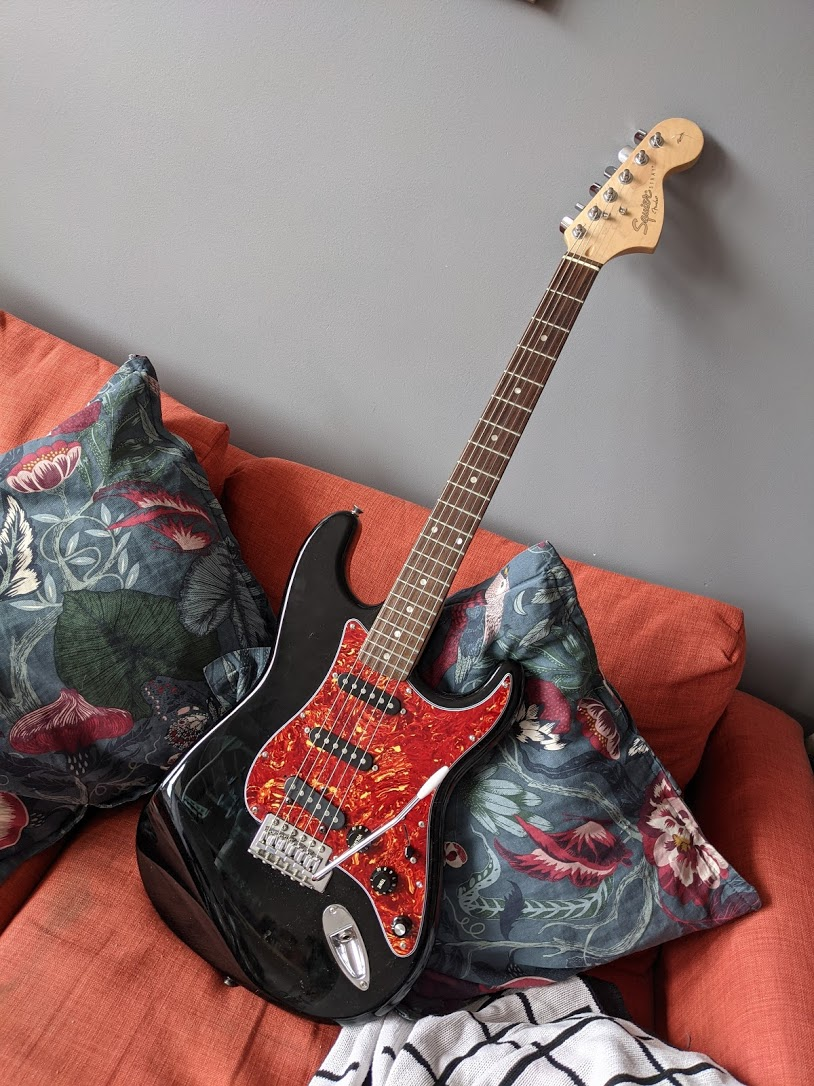