For guitars of the straight waisted variety (or reverse offset).
Post Reply
102 posts 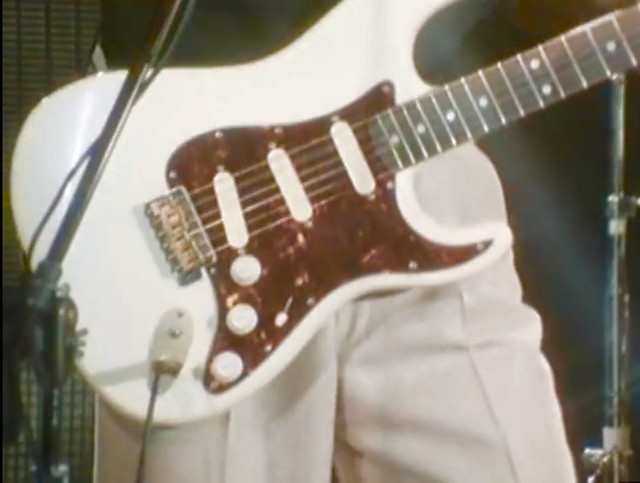 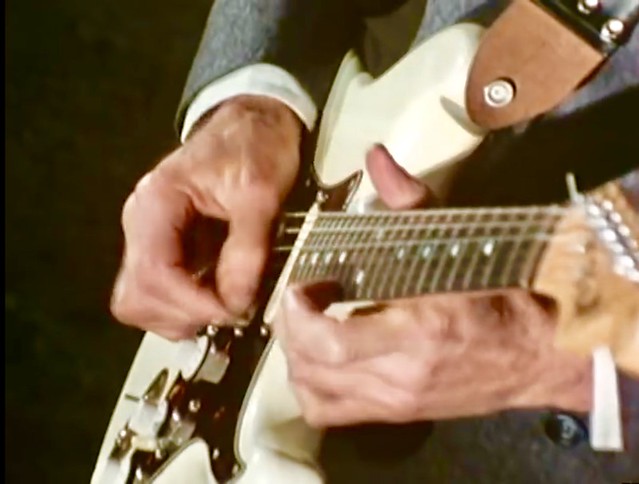 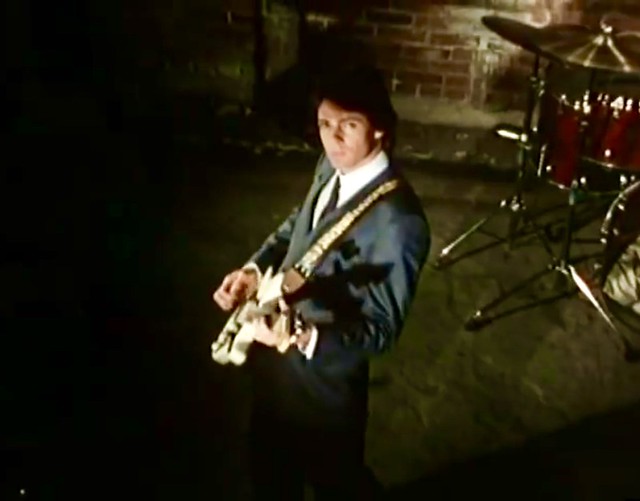 
One of my earliest clear guitar memories is Rick Springfield’s tort-on-white Strat. He was cooler than the other people in the video because he was playing it. ¯\_(ツ)_/¯

PS those lyrics are just the ones I remember best from the song, and I didn’t mean for the pictures to illustrate them. I’m not anthropomorphising the guitar. I don’t consider women and guitars to be the same. I don’t think the song was about a guitar.

If he made any impression on me, it would have been in his earlier incarnation, circa 1970 ...
https://www.youtube.com/watch?v=re3P8fvmsqE

But the only tort-on-white thing that did it for me was Rowland's jag...
https://youtu.be/L7ChSy6FhxQ?t=35
... along with Verlaine's and Robert Smith's other-coloured jazzmasters.

I had more or less given up on guitar by the time punk came along, but it made it me realize that anyone could make good music. I feel sorry for people whose heroes are great technical players - they're destined to perpetually disappointed by their own comparative abilities.

"Howard's motto for guitar was to learn to play one note. If you can get that one note to sound good then you can play guitar. This advice ran contrary to the opinions and guitar histrionics of many '80s icons. They would have you believe playing guitar was more about skill than kicking out a noise that was unique to your own vision. Rowland stood then, and does to this day, as the anti-guitar hero for miscreants across the globe."
https://www.abc.net.au/doublej/music-re ... y/10272626
Last edited by timtam on Mon Mar 18, 2019 11:11 pm, edited 1 time in total.
"I just knew I wanted to make a sound that was the complete opposite of a Les Paul, and that’s pretty much a Jaguar." Rowland S. Howard.
Top

There are a lot of things that contributed to me wanting to play guitar, but the thing that stands out the most was hanging out with my dad in the back garage while we're changing oil and generally working on cars, rocking out to some Lynyrd Skynyrd. I remember air guitar-ing with a broom to "Workin' For MCA". I was probably about 12 years old.
Pickup Switching Mad Scientist
http://www.offsetguitars.com/forums/viewtopic.php?f=8&t=104282&p=1438384#p1438384
Top

WTF? Totally new to me. Wild.

Also, “Workin’ for MCA” is a beautiful tune.
Top

Zoot ... with Darryl Cotton on vocals as well , Beep B. (who would go onto to play guitar in Little River Band) on bass ... awesome band.

Working For MCA ... can't get any better than the Wurlitzer -> .strat solos
relaxing alternative to doing actual work ...
Top

It really is. When I was a kid and taking lessons, I got my teacher to teach it. We both had issues with the opening riff as it's kinda funky, but once you get it, it just sounds glorious playing live (at home)

I always assumed it was Gary who played the guitar solos, but I was surprised to learn that Allen did a lot too. In reality, they likely switched off, either this song vs that song, or each took a few licks during the same song a la Jailbreak-era Thin Lizzy's Scott Gorham and Brian Robertson.

And like you said, those piano/Wurlitzer solos are just heavenly

Given I have a bootleg of Skynyrd in 1976( in the lounge room of one of their houses) teaching Steve Gaines the solo to WFMCA, it makes me think it was Ed King who played the solo ... it also has a quacky sopund to it as well.
Also Gaines used the strat as well as LPs when he was in Skynyrd, where as Collins and Rossington seemed to mainly stay with their Gibson armoury
relaxing alternative to doing actual work ...
Top

Monkees and Mike Nesmiths blonde 12 string Gretsch 6076...although I was only about 4..I just loved the look and the sound. Never owned a gretsch to this day though.. 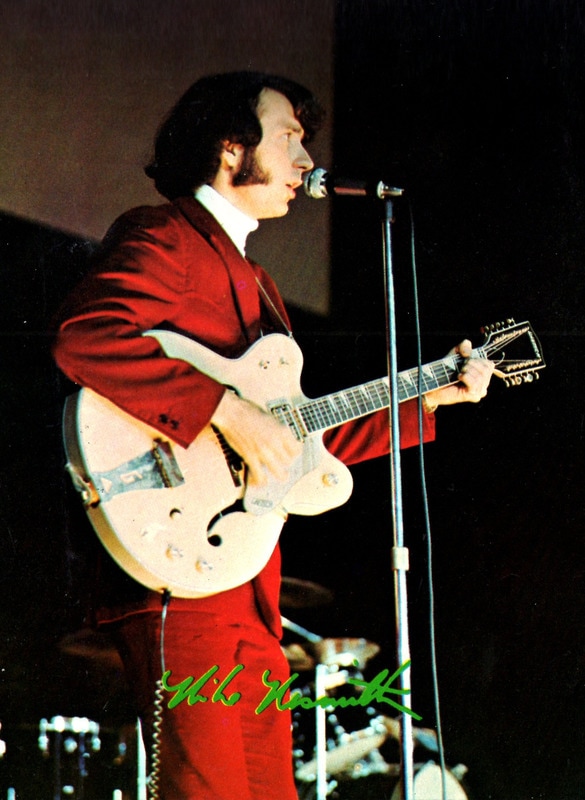 I never wanted to be a guitarist, just a collector, but when I was a kid I discovered this book at my uncle's house: 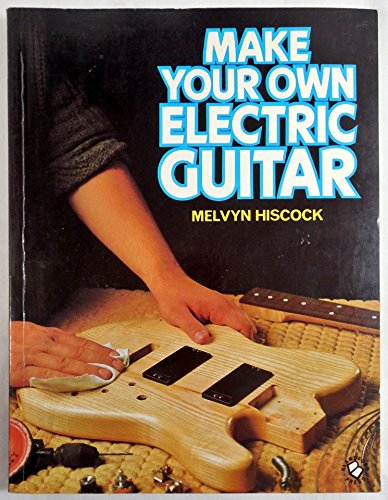 Inside was a picture of a vintage Danelectro Guitarlin in horrible condition-it was probably the only Guitarlin they could find as the book was written before the internet was a thing. Anyway I still thought it was cool as balls, and that's what got me into guitars.
Top

I don't recall ever really having any guitar 'heroes' - to me the guitar as a 'thing' appealed to me.

The first guitar that I ever remember seeing and thinking "wow" was (in my mind at the time) a Gibson - a big old hollow body being played by John Lee Hooker. Now, years later, I know that it was an Epiphone Sheraton ... but it sealed my love of ES/semi hollow type Gibsons.
Top

My first memory of listening to the GUITAR rather than just the music as a whole is the early surf instrumentals like Walk, Don't Run. As a kid I got a strat-ish electric guitar from an ad in the back of Boys Life magazine but couldn't even tune it so it disappeared pretty quickly. Surf is still some of my favorite music.

As an adult it was a part of my "mid-life crisis" I guess. Now I build them MUCH better than I play them. Maybe this year I'll work on playing them more.

ken
Life is an adventure, not something to be suffered through. Don't like your life? FIX it!
Top

Growing up in grim patterned carpet 1970's Scotland in a house with life size tapestys of the pope, my musical path was forged more by what I didn't like (everything I saw in the family home and in other homes), than what I liked and therefore I was almost thankful for all the shit I was exposed to which made me desperately look elsewhere.

It was all also most non visual, just record sleeves if I was lucky and sounds on the radio, since my dad wouldn't let us watch anything on the TV.

I remember going to see our relatives in Canada in the late 70's, they were unaware punk had happened, bar some comedy sketches, let alone anything I liked, considered disco to be fags music and were deep in their Rick Springfield and Styx period which meant I could barely stand being in the same country as them. I think it was one of the times I decided that guitars were most often in the wrong hands.

However I think I decided I wanted a guitar while my sister was watching Animal Kwackers, not in a positive way but I think purely to keep it out of the hands of one of the Kwacker cunts (though I probably called them diddies) and in deep resentment that the TV people decided that this was the sort of thing to show in the short hour before my dad got home and took control of the TV. The Kwackers also left me with a lifelong disinterest in the Beatles and a desire to run as fast as I can away from the worlds many Beatle bores.

It's wasn't until Matthew Ashman's Falcon that I think I saw a guitar I really wanted (but had heehaw hane of owning), prior to this all my pennies were spent on records and I really just dreamt of having 'a' guitar or 'a' anything while my parents were too poor, too holy, too repressed, too fogey and too uninterested to buy me a guitar of any sort or anything I actually wanted if the truth be told.

Gravel...all I had to eat was gravel.

I really want to derail this thread into being about Aussie music from the sixties and seventies...so much killer stuff

What made me want to be a guitarist was my friend Danny talking about guitars when I was 10. What made it stick was discovering Hendrix. I think someone taught me Purple Haze, or I heard some kid at school playing it, so I knew it before I'd heard him and even from that I could tell it was killer
Top

Ha ha, I should point out that I only know that one Rick Springfield tune. I am not a fan.

But seeing that Strat on TV when I was 8 or 10 was an important moment. I was just beginning to realize which sounds on the radio were coming from guitars.

Edit to add: Buck Owens’s Tele on Hee Haw is the other first memory. I thought it was tacky but compelling.
Top

Saw Jimmy page dressed like a fucking wizard and playing stuff that didn't sound like whatever was on mtv in the late 90's. It didn't take much to impress me
Top
Post Reply
102 posts