The only things I don't like about it is that they omitted the tremolo, used an Adjust-O-Matic bridge and humbuckers. It seems like a massive missed opportunity and the answer to a question that nobody asked. I'm totally fine with the longer scale.
Top

Sadly, I think I'm that person. Wow, I could get my custom shop spec in a colour I hate for a mere 2500. Except I'd have chanced my luck and asked for a Gibson scale

They don't have the 10-14" compound radius in their CS catalogue nor the d-profile, but I'm assuming one of the vintage c-profiles is similar enough.

You guys need to put me off more. Make me hate it like you do!

Not sure if I hate it, it wouldn't be anything I would ever buy. But I'll give you my thoughts and maybe they can help put you off and save you some coin.

It's unattractive, it's boring, it's got the worst piece of shit bridge I can imagine on a guitar that expensive, basically an insult at this point. For Fender to put such a cheap pot metal Gibson bridge on a "luxe", whatever the fuck that means, guitar basically is Fender just acknowledging that guitar players will buy any fucking thing at this point.

The "double tap" is probably completely useless like almost all tapped/split pickups are and on top of that I'm sure the humbuckers themselves are totally dull, lackluster, middle of the road uninspired humbuckers from a company that basically does not make good humbuckers. I have no doubt that these pickups are amazing at providing a boring version of a sound we've all heard a million times.

Despite all the meaningless word salad like "For players who demand the ultimate in performance and tone" that the marketing department threw out there, it's a totally uninspired collage of seemingly randomly assembled design features from other, better guitars. When I look at this guitar all I can think of is a horse designed by committee, yet another Frankenstein's monster hodgepodge of parts that should have been left in the graveyard, a guitar so pointless, so unnecessary, so redundant and uninspired that the marketing department literally ran out of hyperbole for once in its life and was reduced to "Sculpted rear body contours are as beautiful as they are functional".

Yes, the hours you'll sit back and admire the beauty of the sculpted rear body contours. You can't put a price on that, but since they did, why the fuck is this guitar twenty five hundred dollars? Is it because of all the "luxe"?

There is simply no way that the people on the "team" that had to write that bullshit didn't end up the day completely depressed and absolutely despondent about how lives that began with such promise ended up recycling the same talking point that Fender used in 1954 when sanding the wood on the back of the guitar genuinely was kind of new. You have to imagine that there's a big wall of Fender marketing cliches that they just keep recycling, this particular one might have been created by your grandfather, fresh back from Iwo Jima and World War 2. And here it is again, alongside whatever the fuck "ultra-rolled fingerboard edges" is. Is that more than "mega-rolled"? I forget.

It is absolutely conceivable that these marketing people went home from a long- too long- day of trying to find something new to say about a subject that has been beaten to death and picked a pointless argument with their spouse just to be able to feel something, anything, before the ice rattles in the glass as vodka is applied liberally to drown both ice and feelings in preparation for another day of trying to describe Fender's millionth slight variation on the Telecaster or why the fuck this is a Jaguar or what the fuck does "luxe" mean.

I agree the marketing is a joke.
But the guitar itself I don’t mind it. I kinda like it….

But I don’t think it should be 2500!
OR an anniversary model.
Possibly shouldn’t even carry the jaguar name since it’s so far removed…
The bridge sucks too…..

Otoh…..
It reminds be of the mid 00s black MIJ HH hard tail jags. I had one and wish I never sold it.

Also I like D necks and string thru. Stainless frets interest me and FFS it doesn’t have narrow tall fret wire so that’s a great sign.

I’d consider buying one if it was a 1200$ mim and could scoop a used one for 950 or something……. but I can think of a million guitars I’d rather drop 2k$ on
Top

For anyone thinking of buying one of these, here's the summary.

Cons
A WW1 cigarette case that's been moulderingin a trench for 100 years would be an improvement on the bridge.

My grandfather - who once spent 3 years restoring a 4 berth boat only for it to sink on its second maiden voyage because he'd sanded the hull back too far, then listed it in the local paper as a submarine(true story) - likely came up with the rear contours and marketing.

The rear bout is probably there so my grandfather can flip you behind the guitar without you noticing.

The only sparkle on the humbuckers is on the covers. Everything else about them is perfectly, perfectly dull. Their only uniqueness is that they sound like you've got an 80 year old sound engineer between your jack and your amp. In other words, they sound like every guitar ever used to record classic rock. You may as well mime to a backing track.

It has circuits in the upper bout switches and one on the volume pot instead of a treble bleed. Seriously, a circuit instead of a flipping capictor and resistor?

On the volume pot, it has 3 settings: on; is it still on? and no, it's not still on. There are rumours of a secret off setting too if you dare roll it down a little (won't that just devalue the guitar?)

The string-thru staggering looks awful against the contour of the body's heel. Look it it! If you thought the misaligned Mustang knob and jack plate was bad, you'll have nightmares with this. Ha, now you can't ever unsee it!

On that staggering, because the aura between the ferrules and the body is out of whack, the sexier your playing is the worse your tone becomes. That's right, they didn't put a strangle switch on it because they figured out how to strangle all the tone using physics and ferrules. That's a scientific fact - you can look it up on Reddit.

It has no shielding.

The colour is the guitar equivalent of avocado bathrooms from the late 70's.

It has AI locking tuners. I heard they're Sonic Youth fans.

The guitar on the neck plate is so frigging cool. I want that guitar instead. I think it's a Squier.

Not even Keith Richards would look smoking playing this guitar.

If you buy it, the poor people who devised it will not be some of those who get laid off. See Larry's post for why that's bad.

It has a lovely neck.

It might still be overpriced in a few years.

I think that just about sums up the crowd-sourced knowledge?

And awesome post, Larry. You're an absolute gent. Now to clear a space at the back of my wardrobe and wait for the price to plummet.
Top


And awesome post, Larry. You're an absolute gent. Now to clear a space at the back of my wardrobe and wait for the price to plummet.

It's a bad guitar and you are a bad person for liking it.
"I don't know why we asked him to join the band 'cause the rest of us don't like country music all that much; we just like Graham Lee."
David McComb, 1987.
Top

I love the idea of it, but the execution...eh
Top

NGL, this made me buy one, which I think makes you the bad person

My verdict: Anyway, thought I'd update, even though I seem to be the only person in the world who's curious about these

I wanted one of these, but passed after someone reminded me that I already have too many Jaguars. Then I forgot about it and bought some other Jaguar. I'm going to be sad for years that I missed this one, but I just don't need another Jaguar. Hopefully there will be more ultra luxe in the future.
All pain and troubles melted away like lemon drops beyond the contrails across the sky.
Top

I’m holding out for something luxeier.
Top

tammyw wrote: ↑
Wed Aug 17, 2022 8:21 pm
I wanted one of these, but passed after someone reminded me that I already have too many Jaguars. Then I forgot about it and bought some other Jaguar. I'm going to be sad for years that I missed this one, but I just don't need another Jaguar. Hopefully there will be more ultra luxe in the future.

At the risk of being an enabler, do you have a 25.5” scale Jaguar?
Top

I had a fender Japan JGS special (see pic). These were available in black with matching pickguard and headstock and look quite a lot like the Ultra Luxe, just with more traditional electronics - rhythm circuit etc.
It played really well. I really liked the "dragster" pickups but the lack of vibrato meant I never bonded with it so I eventually sold it and put the money towards my Cunife Jazzmaster. 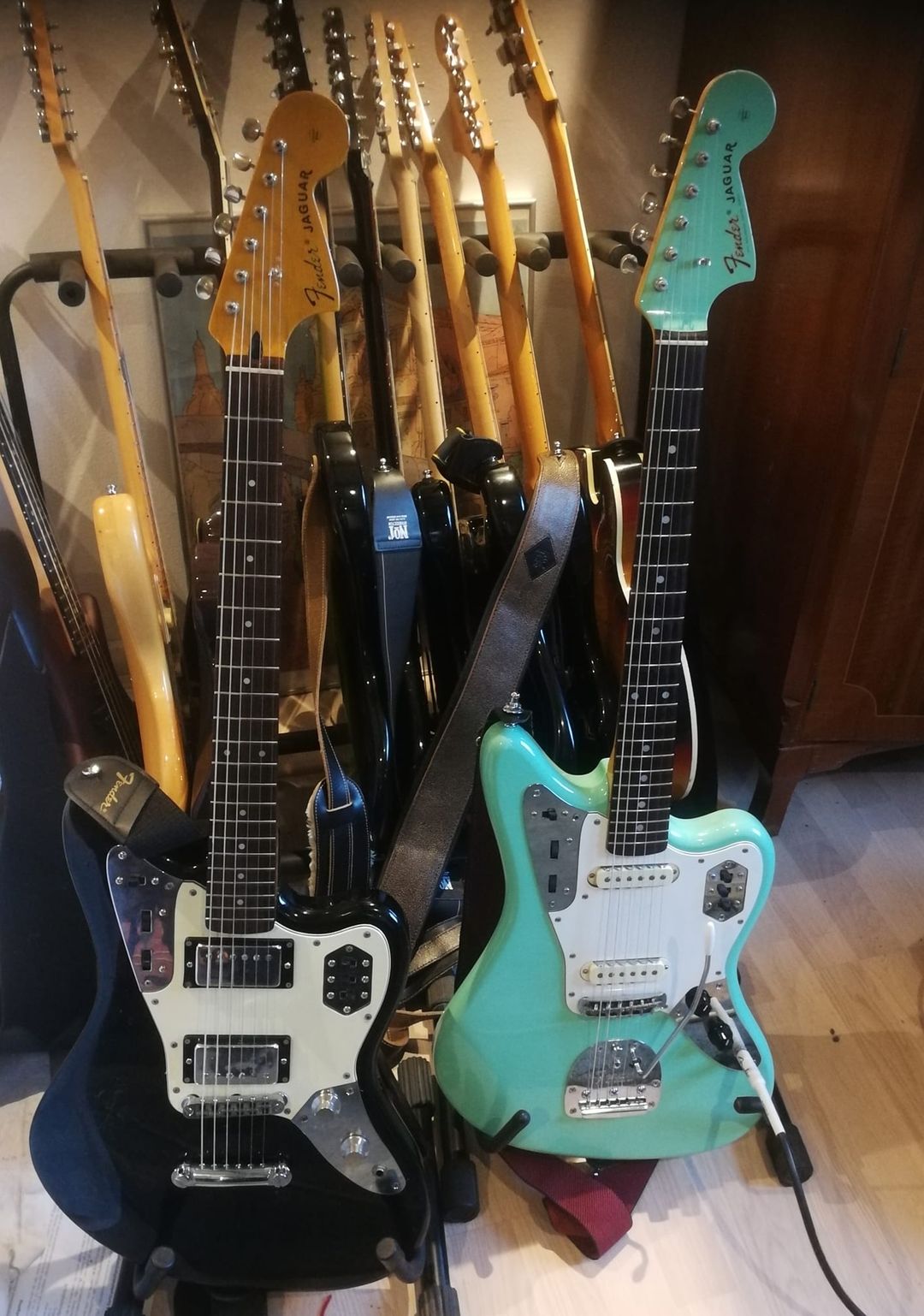 MC5tooge wrote: ↑
Sat Aug 20, 2022 6:17 am
I had a fender Japan JGS special (see pic). These were available in black with matching pickguard and headstock and look quite a lot like the Ultra Luxe, just with more traditional electronics - rhythm circuit etc.
It played really well. I really liked the "dragster" pickups but the lack of vibrato meant I never bonded with it so I eventually sold it and put the money towards my Cunife Jazzmaster.

Funnily enough, those were the two other options I was looking at against the Luxe.

Not a fan of sunburst but would've loved those CuNiFe pickups. Might've made a mistake not getting one of those, but I may still grab a couple of the pickups for a build I've got on the go if I can find the neck I'm looking for.

Was swithering on a CAR JGS but seller wouldn't ship/ would only do pickup. Stoptail doesn't bother me because I'm not a vibrato player - I tend to lock them down. JGSs are probably my ideal Jags so might've made a mistake there too.

The Luxe is fine - just taking me a while to bond with it. I don't think the money I spent on it is helping there, tbh. I could've almost gotten one of each of the other options and, let's be honest, they're more fun guitars. The Luxe feels very, very serious, and I'm just not sure that's where my head has ever been when it comes to playing guitar.

The switches really bother me on the Luxe, though. They're fantastic quality, but they're loose. I don't expect to have to open up a 2k guitar in order to house the switches more securely.
Top

Yeah, they made a few colours of that model that never made it over to North America for sale, like my gunmetal blue one: 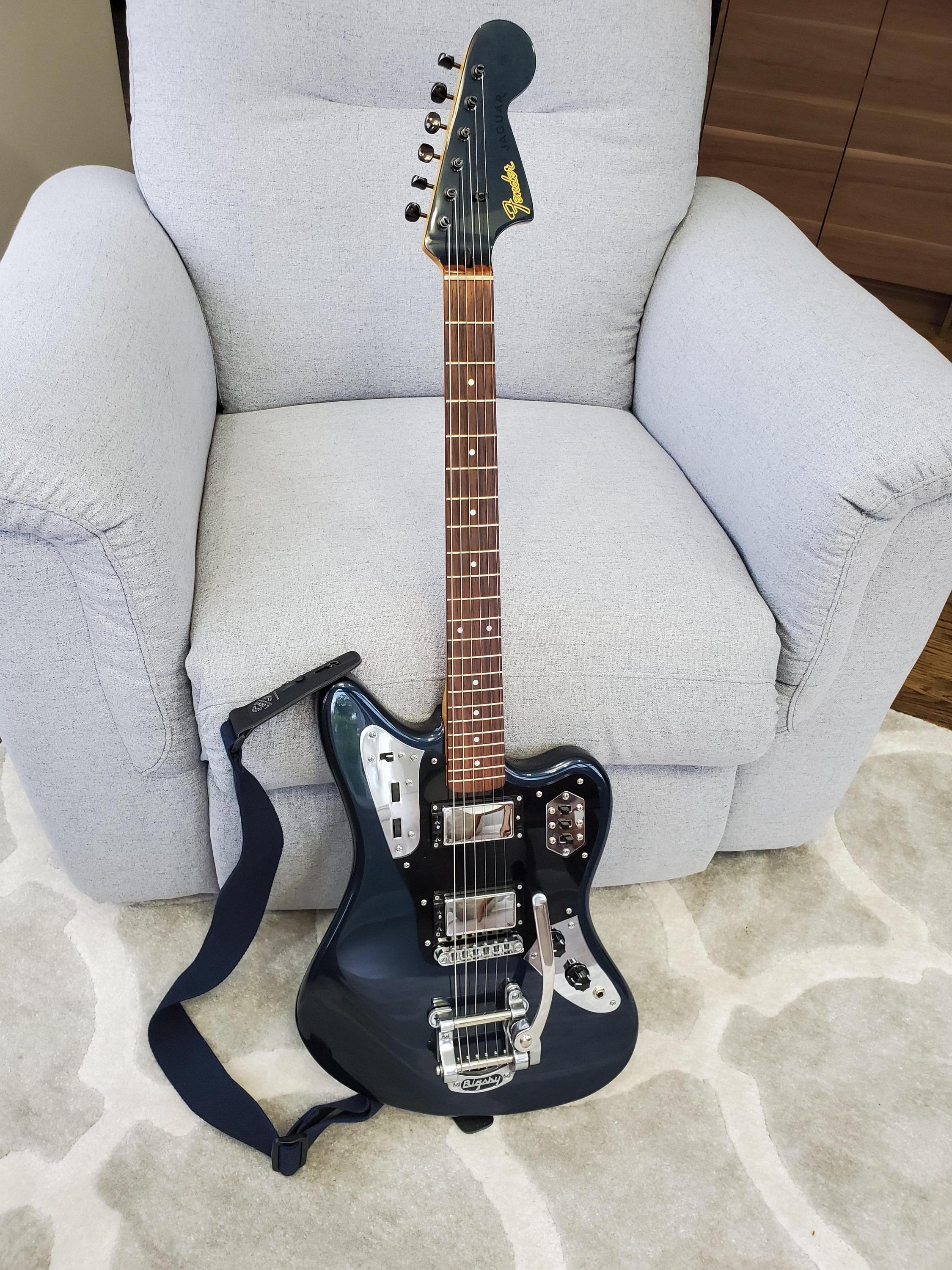