Bringing your older offset back to life.
Post Reply
9 posts • Page 1 of 1

Last year in June my family moved from Oregon to a city outside of Lisbon in Portugal. I've always loved the look of older 60's Italian guitars and I watched a few pop up on OLX (the Craigslist equivalent here) and I finally saw one at a relatively good price that I liked. When I bought it it was in a sad state and it needed a lot of work. A friend in Portland introduced me to a local builder who runs a guitar shop and he was able to do the needed work for me. The original bridge was gone and wasn't much to write home about, the tuners weren't very functional, the electronics needed love and the frets were completely beat.

I did a lot of research and ended up finding a tech on IG who'd done a few overhauls of these and he suggested using a modern Gotoh TOM bridge to replace the older bridge system that didn't really work well. He also suggested retrofitting a set of Gotoh 6-on-a-side tuners. I ordered my parts and dropped the guitar off a while ago and just got the message that it's all done, along with a final photo of it.

At the end of the day the guitar got modern tuners and TOM bridge, a complete and needed electronics overhaul, a shielded pickup cavity, a full compound radius refret to jive with the bridge and one rewound pickup. The truss rod evidently doesn't have any movement in it, but it's stuck in the perfect position and the action is good, so it shouldn't be an issue as its been in the right place for a very long time.

There's a lot of pictures, so I'll just post one finished pic and a link to the gallery. There's not a lot of detailed pics out there of these, so hopefully these will be useful to someone. 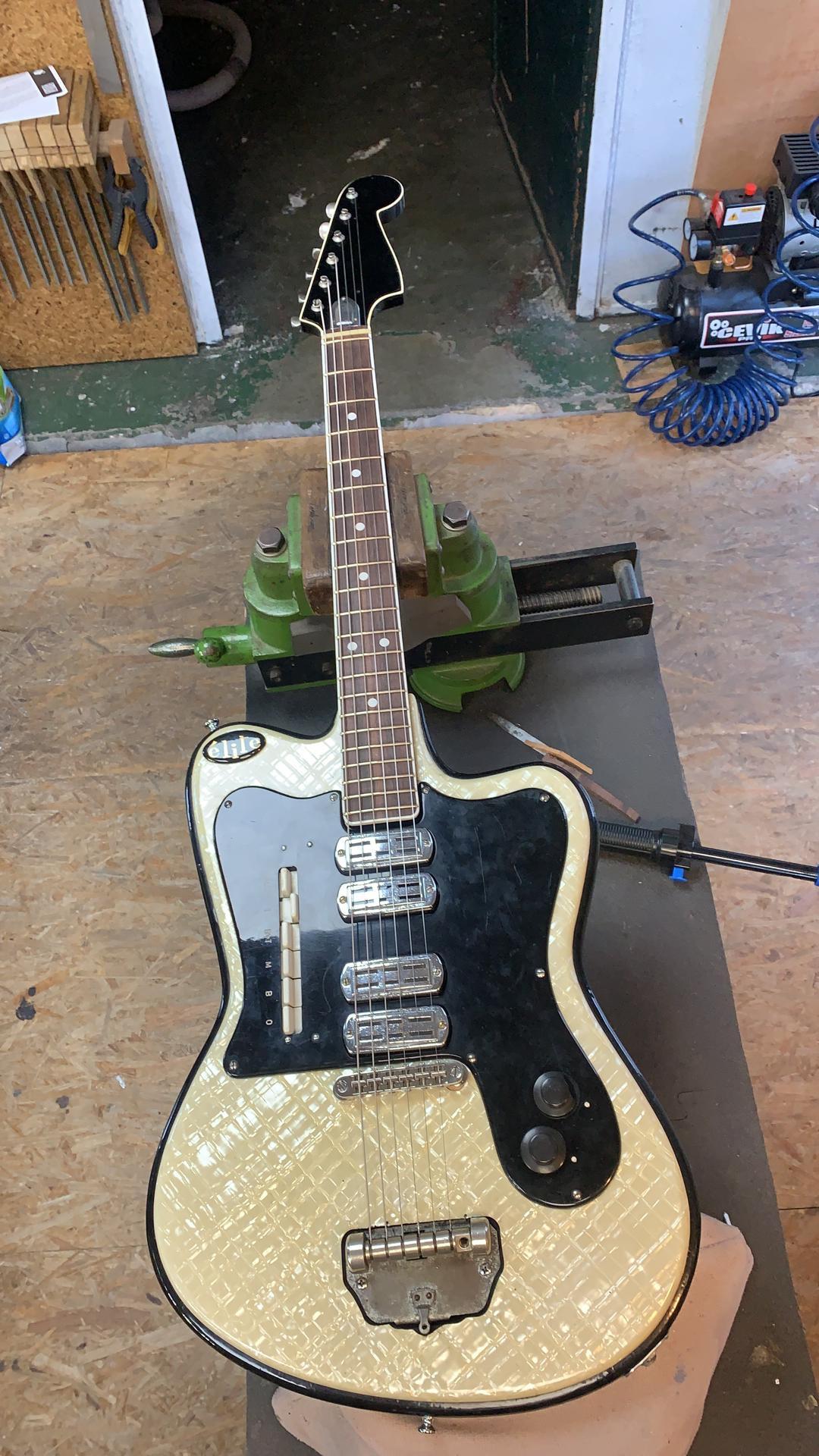 What are those pickups like? Does the trem still function?
Top

I just picked her up and got home.

Pickups evidently measure quite hot, around 11k-ish. They're mini-humbuckers. They were sort of dark when I demo'd them at the shop, but once I got home and put them through my TMDR, they sound great. They're unpotted and likely very microphonic. I haven't played loud yet, so we'll see what happens. I love unpotted pickups though, so that's good with me. They all have very unique voices and the switching system made sense instantly and feels a lot more robust than I thought it might. The range of sounds is pretty impressive and you've got a lot of options for sounds.

The trem didn't come with the bar and it doesn't look like a great device, so my directive was that there was zero expectation that it would work. I just wanted it setup like it was a hard-tail. I've got plenty of trem'd up guitars and don't need bad engineering taking away from an otherwise cool design.

Now that I've got the guitar in front of me, it's dawning on me that it feels and looks a lot like the body styling of a Gibson Firebird. The neck is also very chunky, which I'd forgotten about. It's also a long-scale neck, which is cool since I've ended up with a lot of SS necks around here somehow.

The fretwork that my friend did is masterful and it plays as well as any well-built new guitar you can find today. The tuners also look great on it. I got the relic'd Gotohs and they look perfect.

Overall I'm very pleased. I worried that it would end up being one of those guitars you fix up and then figure out it wasn't really worth it. It seems this one was worth the effort and expense after all.

Here's some updated pics of the plugged up body (for the TOM install) and the tuners. 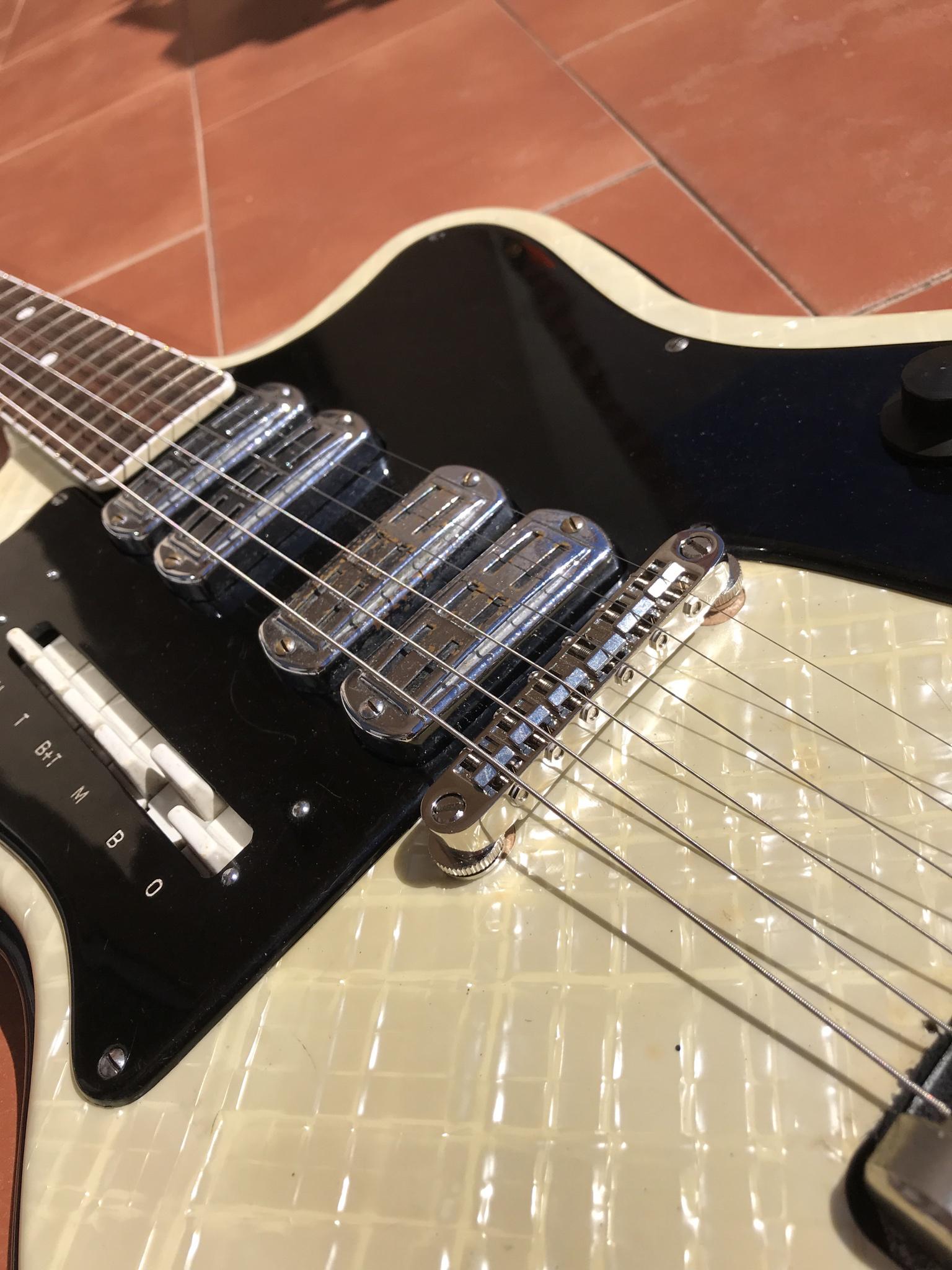 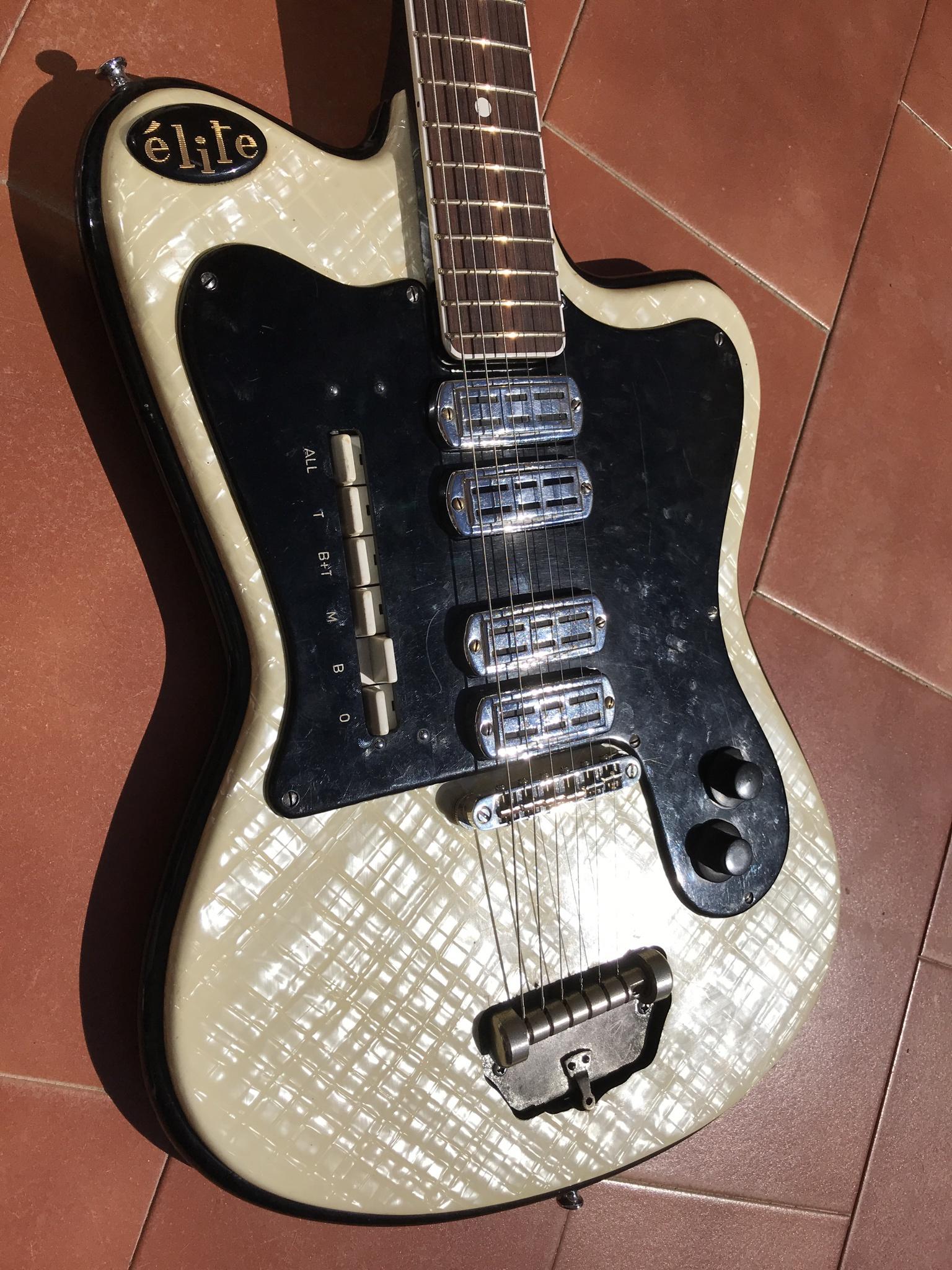 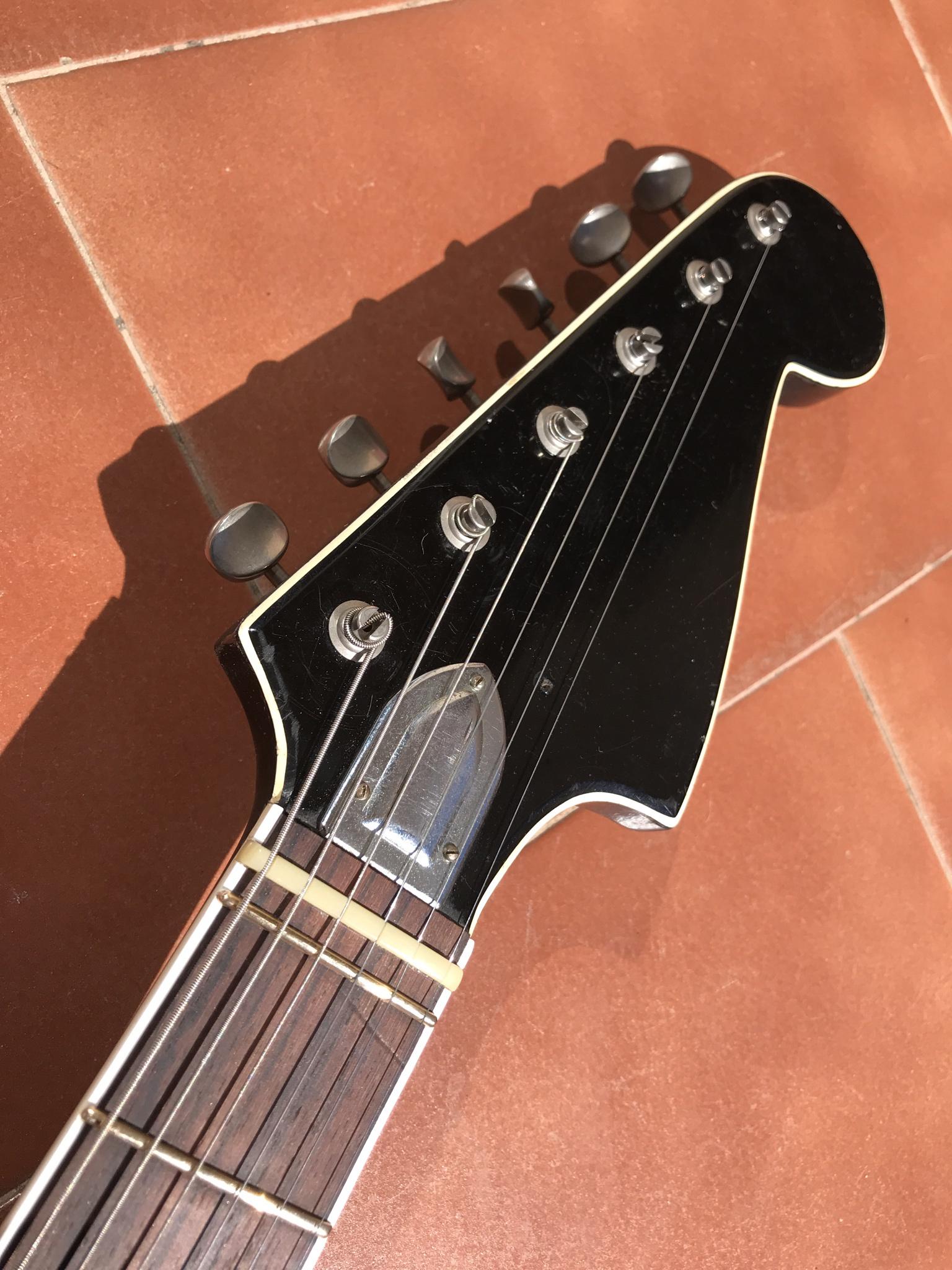 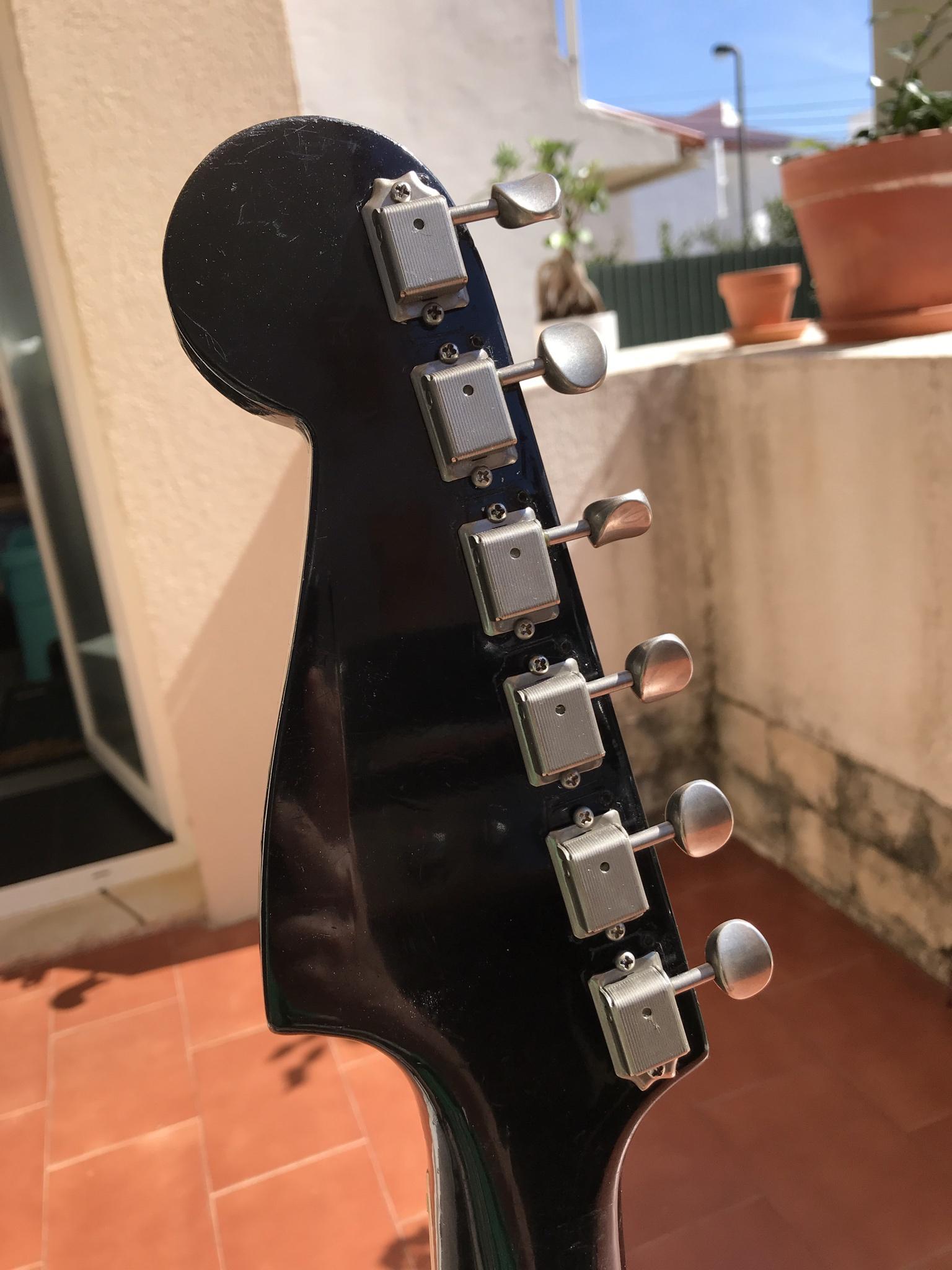 The tech should have sourced some Van Ghent or Rubner tuners, or at least, used full plate single Klusons or some other rectangular plate singles. It just looks so bizarre to have the center gears spread out when they were meant to be butted up flush to each other.
My go-to on something like this for a bridge would maybe be a Mustang bridge, or GFS has a sorta repro of the old Hagstrom/Guild adjustable bridge.
The pickups (unless all that remains are the covers) are single coils in those.
I like it! Then again, I have a "type", and that type is pearloid.
Top

Next to my PAF style pickups, these are the quietest pickups in my house, so I tend to think my friend was correct about them being Mini-hums. The broken down pickup photo looks a lot like a dual-coil to me, but maybe it's just a really quiet single coil. Regardless, they sound amazing. I just tried them with my Fuzz Factory for the first time. A match made in heaven.

There's some info in here that discusses a move to dual-coil pickups in the series in 1962, so that seems correct. 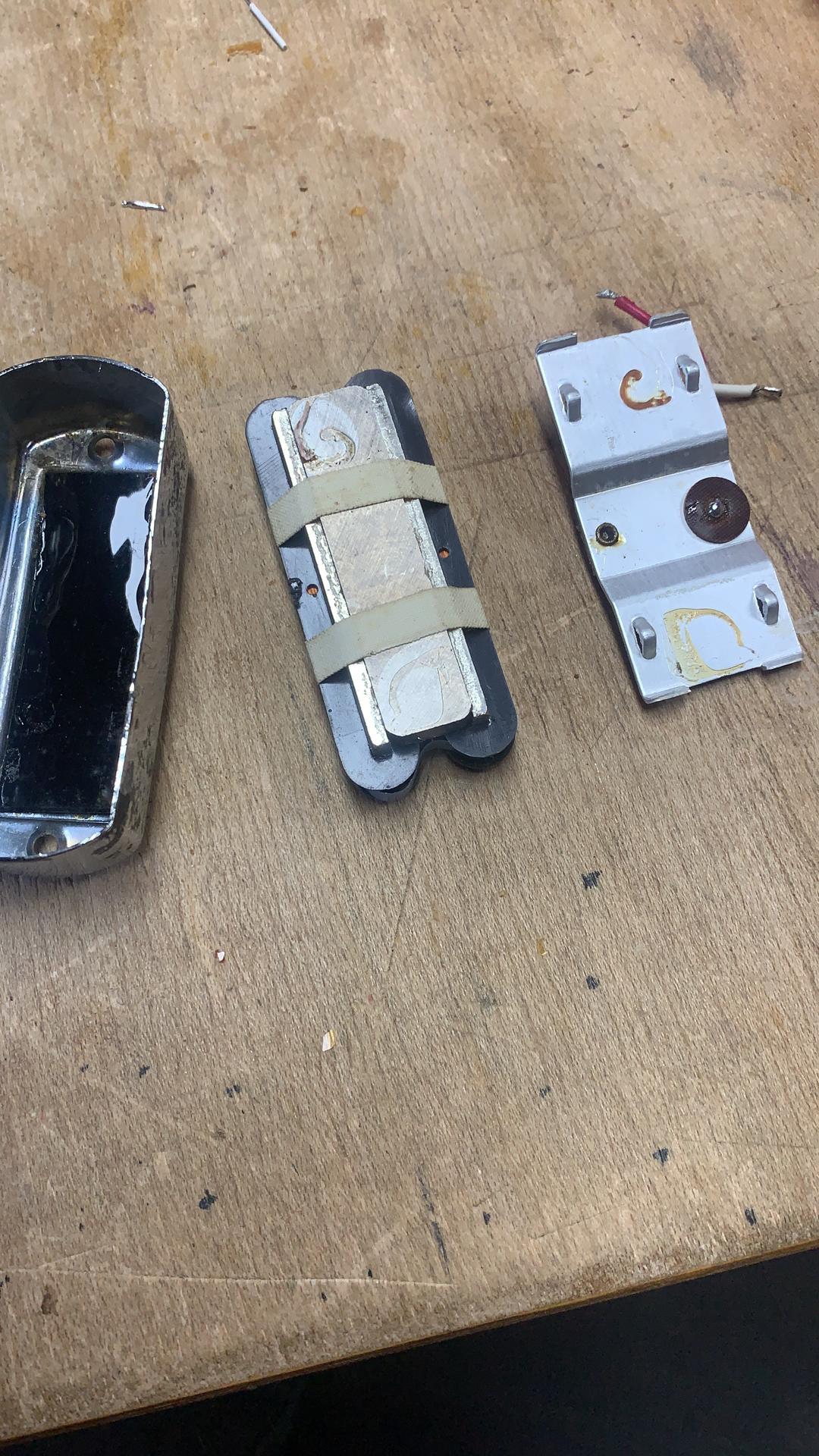 Re: choices for bridge and tuners, I agonized over what to source. I ended up finding a tech on IG who'd refurbed a couple of this exact guitar and had already found parts that worked well for the job and got a good result. I just followed his recipe and sourced and handed off the ingredients to my friend. I agree there could have been a better aesthetic choice for the tuners, but this guitar will never be mistaken for an OG piece. I really love the ratio and functionality of the Gotohs, so I'm always happy when they end up on a guitar I use.

Hard same of the mother of toilet seat. Dining room table, guitar or lapsteel. Wrap it all up. Sexy, sexy.
Lee
Top

Love it. I understand the concern about looking the part, but Gotoh tuners are great.
Top

infiniteposse wrote: ↑
Wed Mar 17, 2021 5:32 am
Next to my PAF style pickups, these are the quietest pickups in my house, so I tend to think my friend was correct about them being Mini-hums. The broken down pickup photo looks a lot like a dual-coil to me, but maybe it's just a really quiet single coil. Regardless, they sound amazing. I just tried them with my Fuzz Factory for the first time. A match made in heaven.

There's some info in here that discusses a move to dual-coil pickups in the series in 1962, so that seems correct.

Yeah, those are mini humbuckers! ... in a place I had not seen or expected to see them.
Top
Post Reply
9 posts • Page 1 of 1