Bringing your older offset back to life.
Post Reply
51 posts

it's been about three years since I posted, as I've been trapped in the synthesizer wormhole. If you haven't yet started with synthesizers: Don't! It's a trap!

But now I'm back in full glory with one hell of a renovation project. I was very, very lucky to find what I assumed to be a 1966 Jazzmaster. The pre CBS Klusons and the B&B neck were the giveaway. It came from a friendly old fellow who bought it new in about 1969/1970 for 1700 Deutschmarks (!) and he played it most of his professional career. Once sunburst, but now, no more. He told me he was playing it so much the finish was flaking of... So he sanded it down to bare wood and stained it brown. Thing is, old guy didn't even bother to unscrew the hardware and all. Fairly heavy handed sanding and quite liberal use of brown wood stain, the type you normally use on outdoor benches and picknick tables. Adding to that, most metal parts was sanded over as well and covered in very thick gold lacquer, including the pickguard and pickup covers. Then, at some point the guitar was again sanded and left as is. 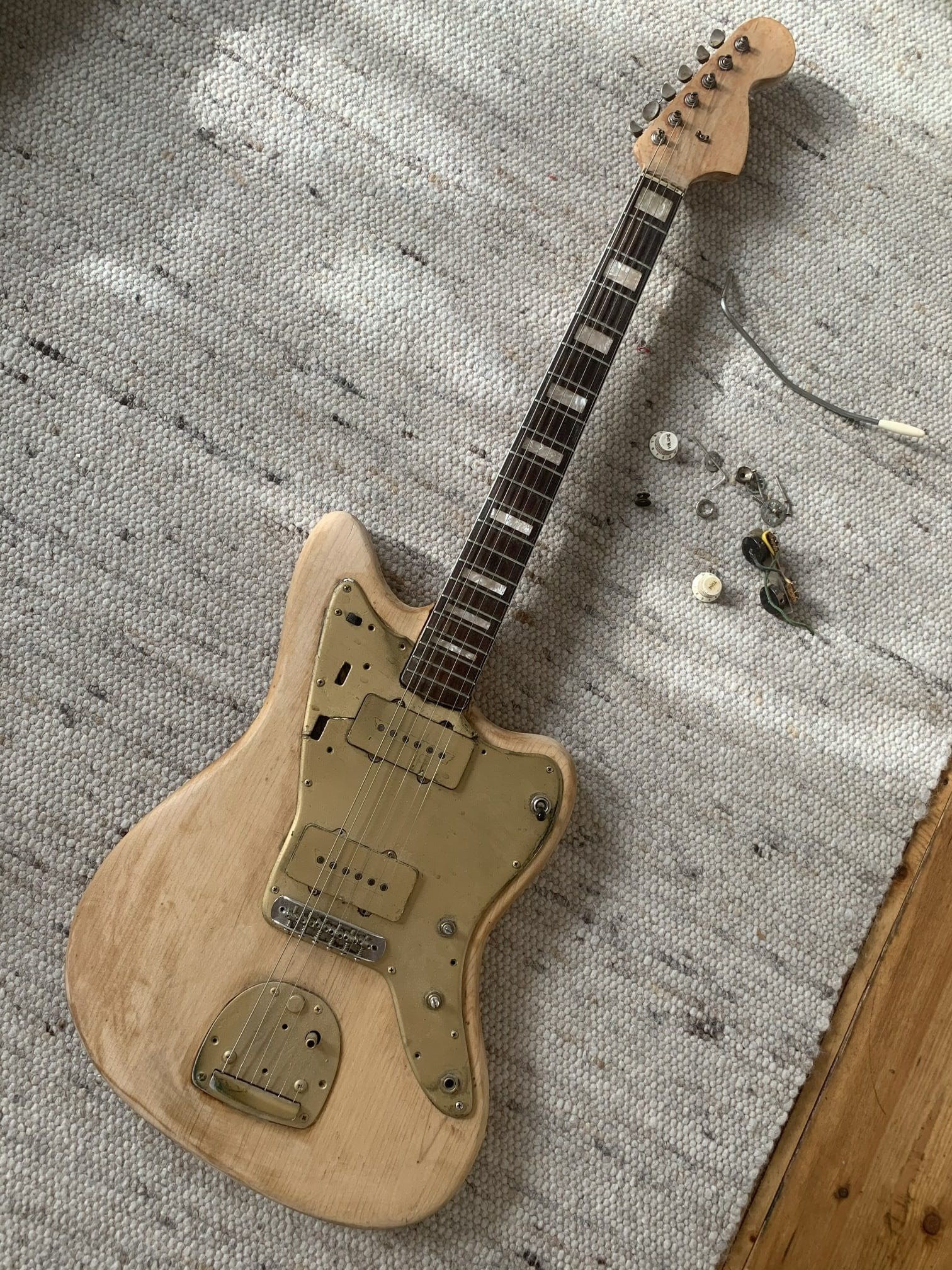 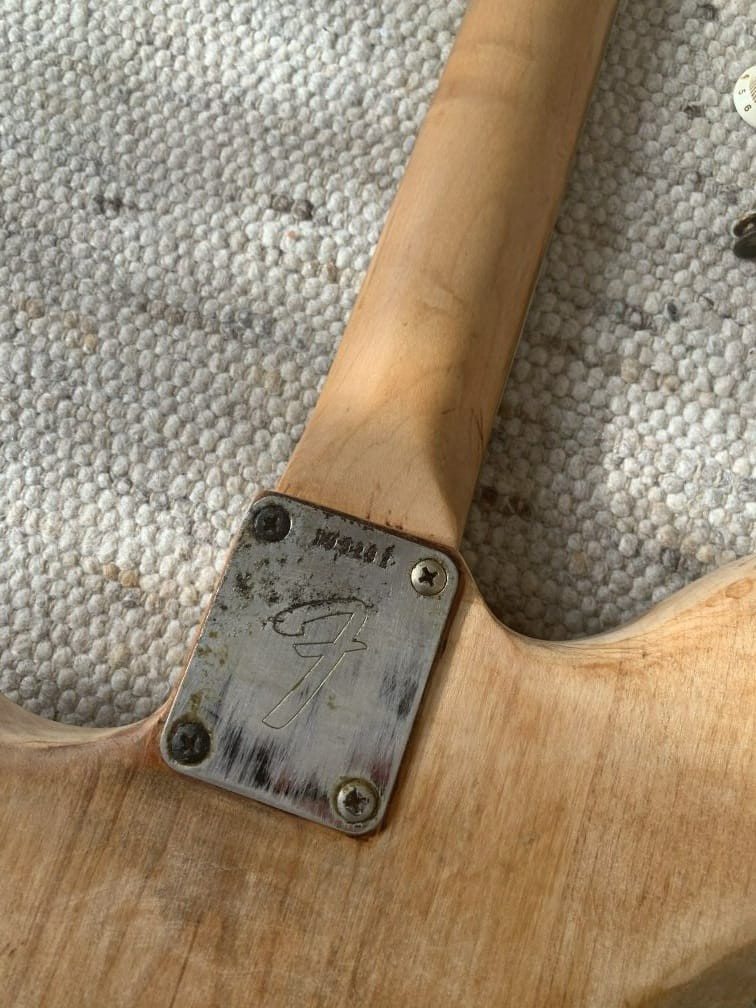 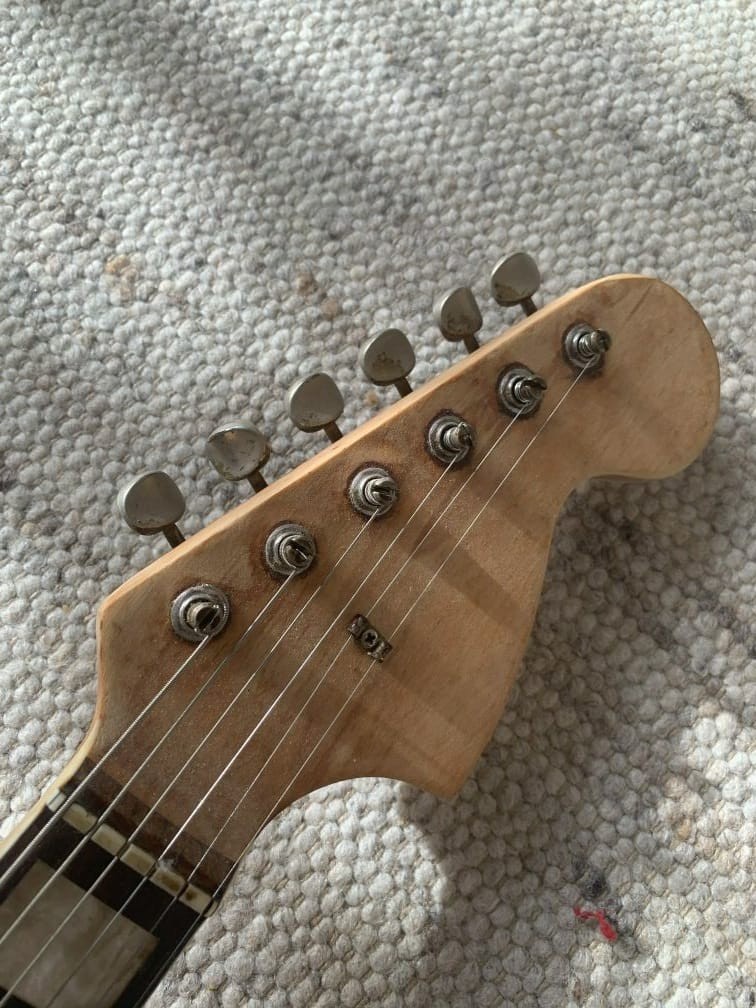 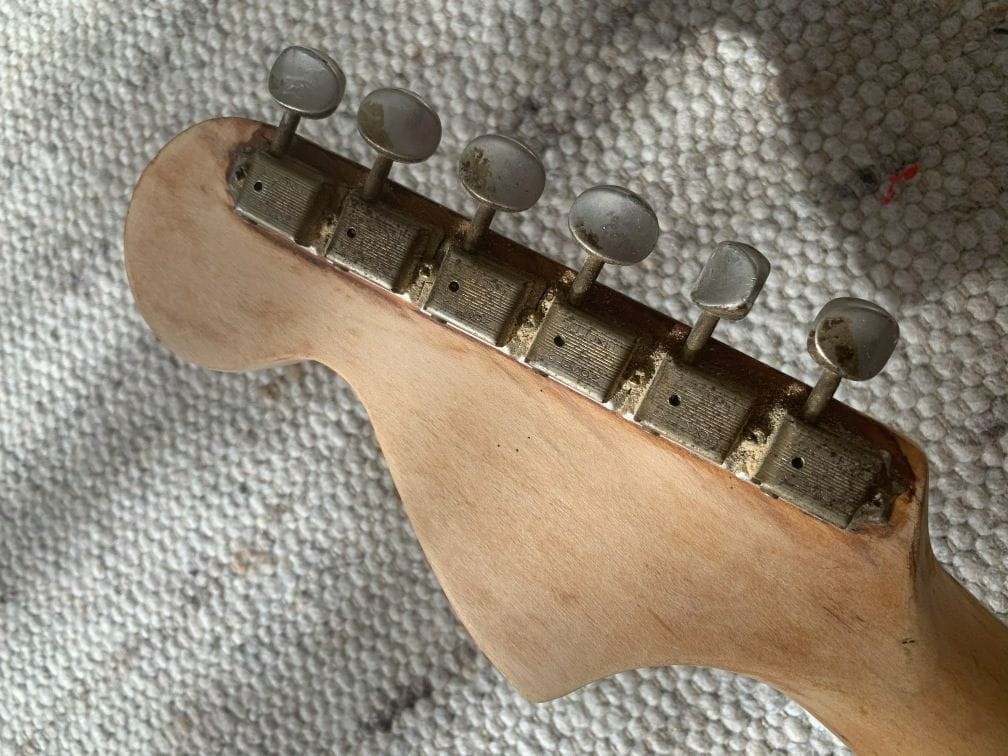 Once it arrived in the mail it was good fun doing all the detective work. And I was right, it's a Oct 1966 guitar, original pickups from mid-66, most if not all screws original and only a handful of them missing. 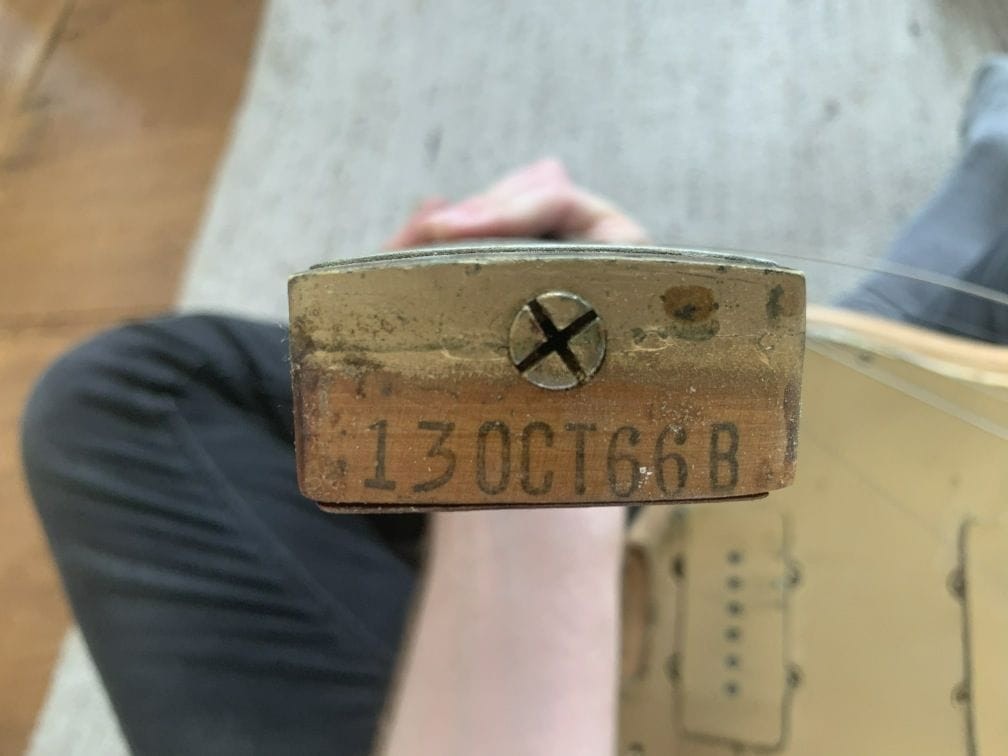 The pickguard is going to be a major pain to rescue. It has a bad crack and also is covered in very hard and thick gold paint. I don't really know what to do, same with the pickups. Acetone bath worked perfectly for all things metal, but it's a no-no on the plastic. Same goes with heat.
Any ideas? I heard about oven cleaning spray, but has anybody tried?

The paint is so thick I haven't been able to even tell whether it's tort or white. Telling from the wide bevel it appears to be an old pickguard, but I scratched the bevel and I first found a layer of black paint, then solid white plastic, not the typical white-black-white trim. Was there ever a fully white pickguard for the JM? I doubt it's a tort guard, but I hope I'm wrong. We'll see. Any ideas how to proceed? Sanding? Chemicals? Or just buy a new one and be done? 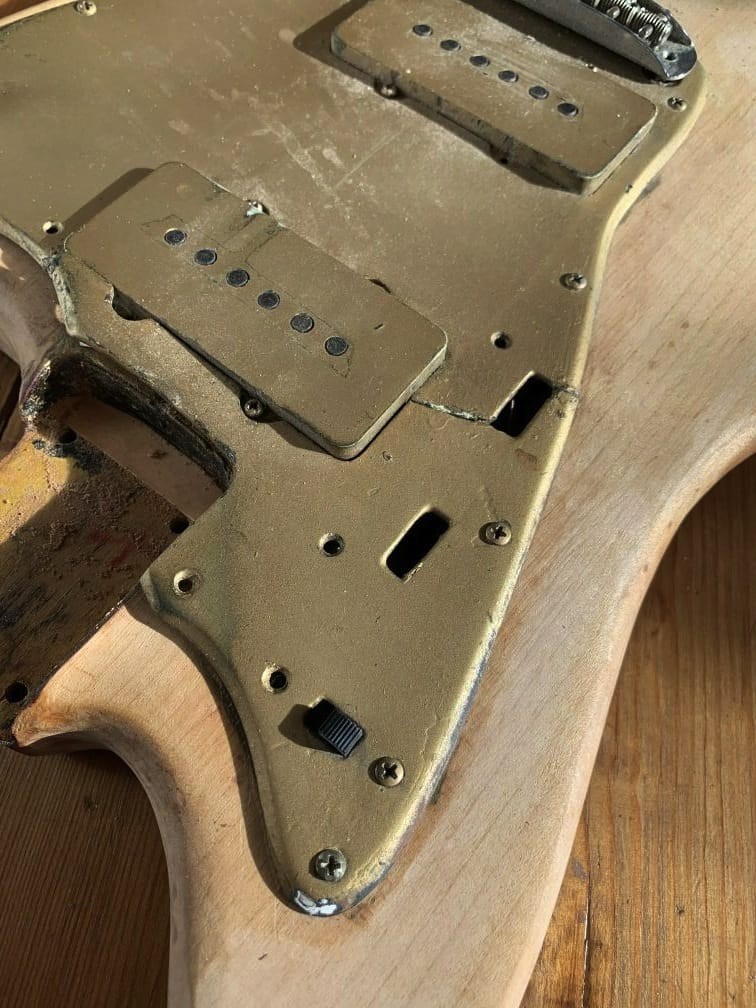 Minor shrinkage and the wide bevel let's me think it is indeed a cellulose pickguard.
I hope it's tort, but we'll see shortly... 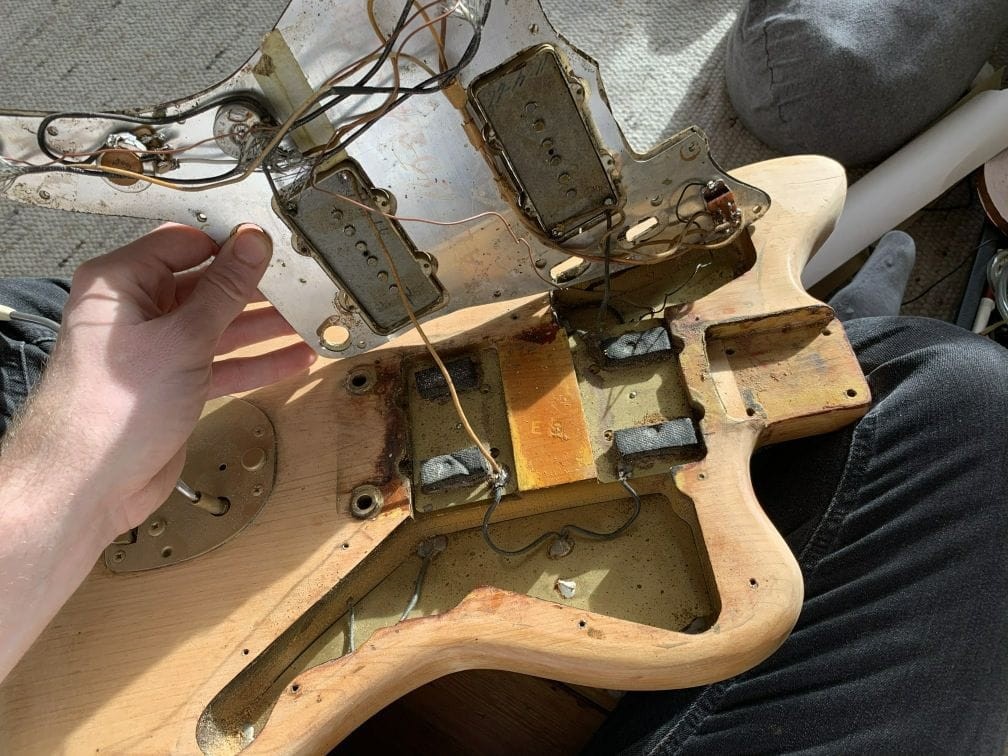 Look, it's the infamous ES stamp. My offsetology is a bit rusty and the search function failed me on this.
What was that supposed to mean? Exhibition Showcase? Export Something? Extra-long Sustain? 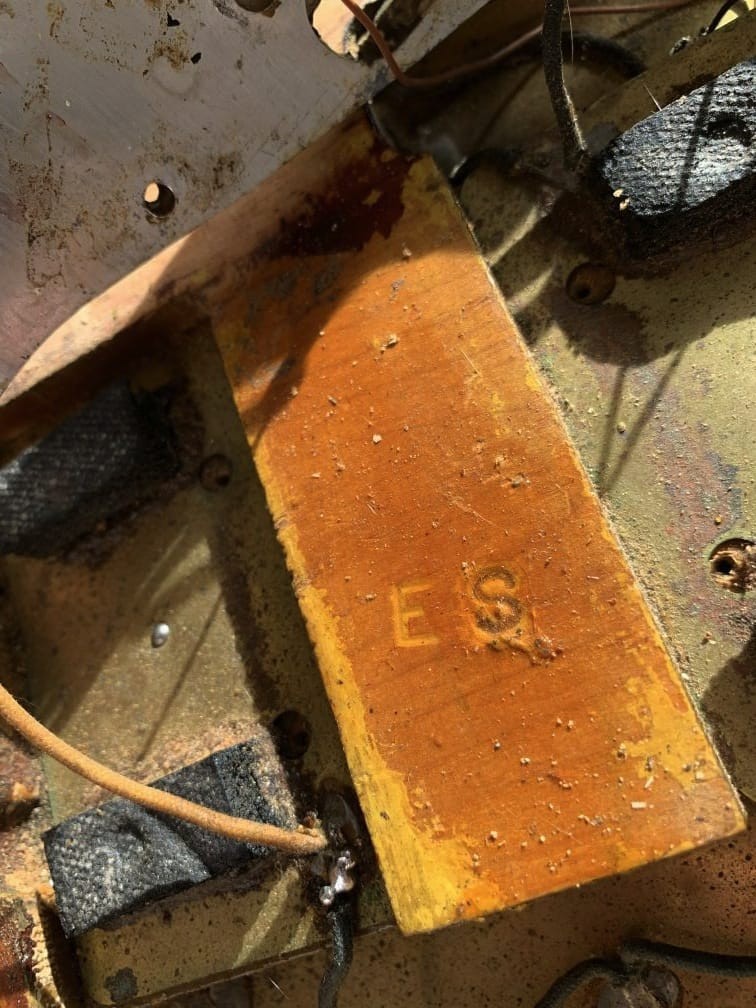 I spent some good time getting all the gold gunk off the trem plate, the screws and get the gumified stain off the tuners with acetone.
Pretty happy how it turned out. Unfortunately the trem plate looks pretty bad. It seems that the gold paint was put on after the fact that the whole guitar was sanded before staining without taking it apart. I tried to polish it up to 12000 grit sanding pads which helped a lot, but maybe it's better to re-chrome it. We'll see, it's definitely looking relic, but I don't know if in a good way. 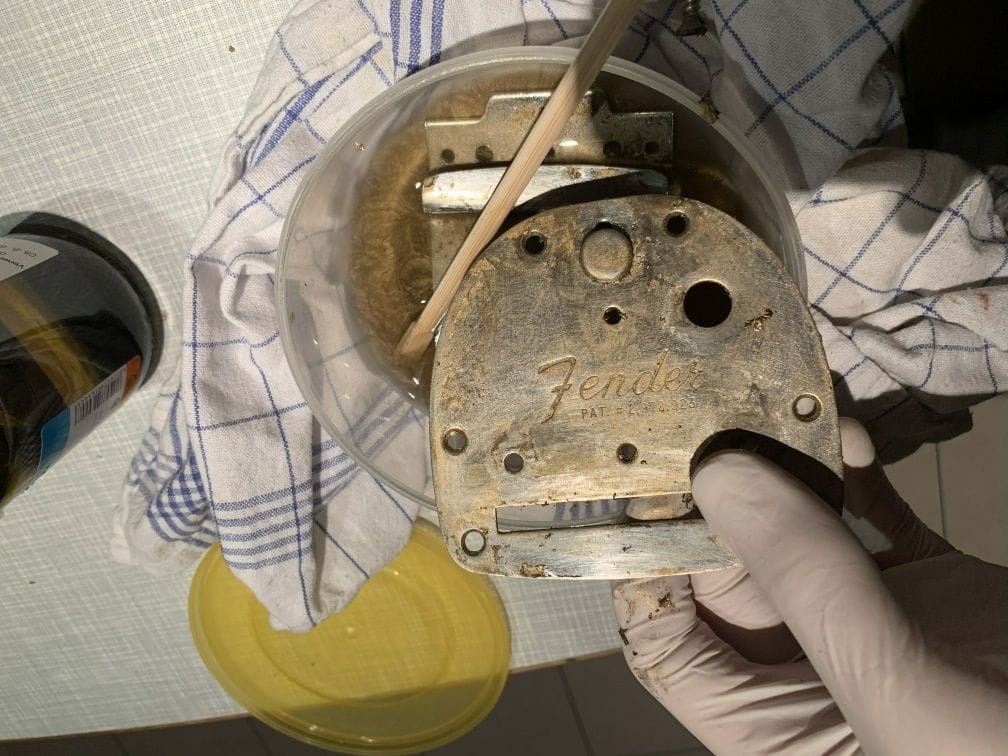 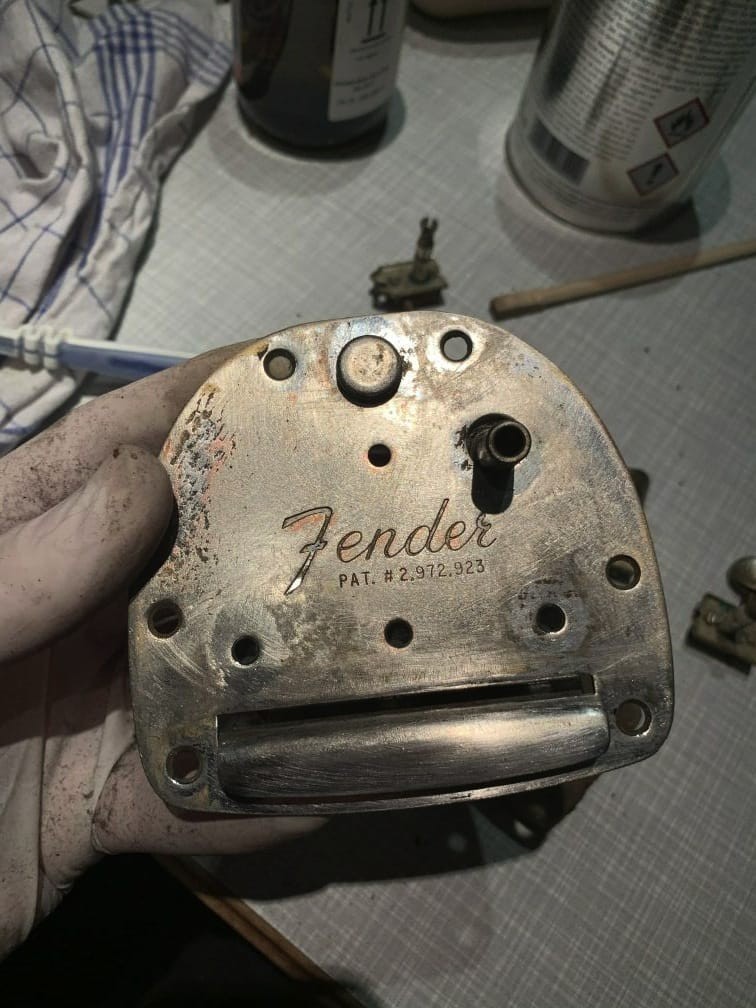 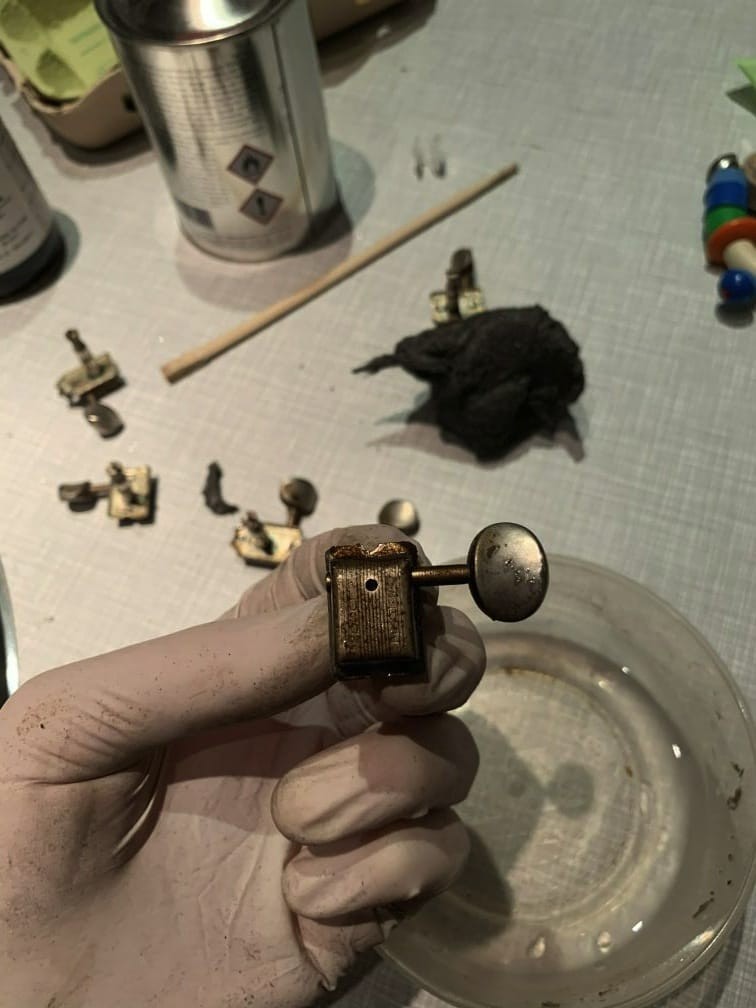 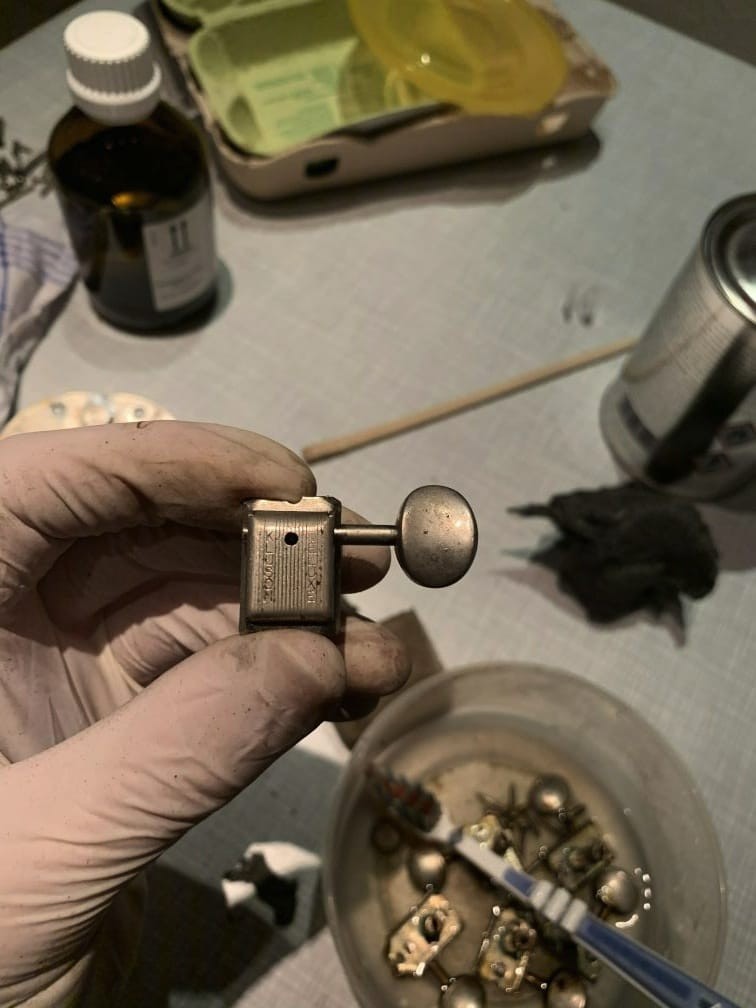 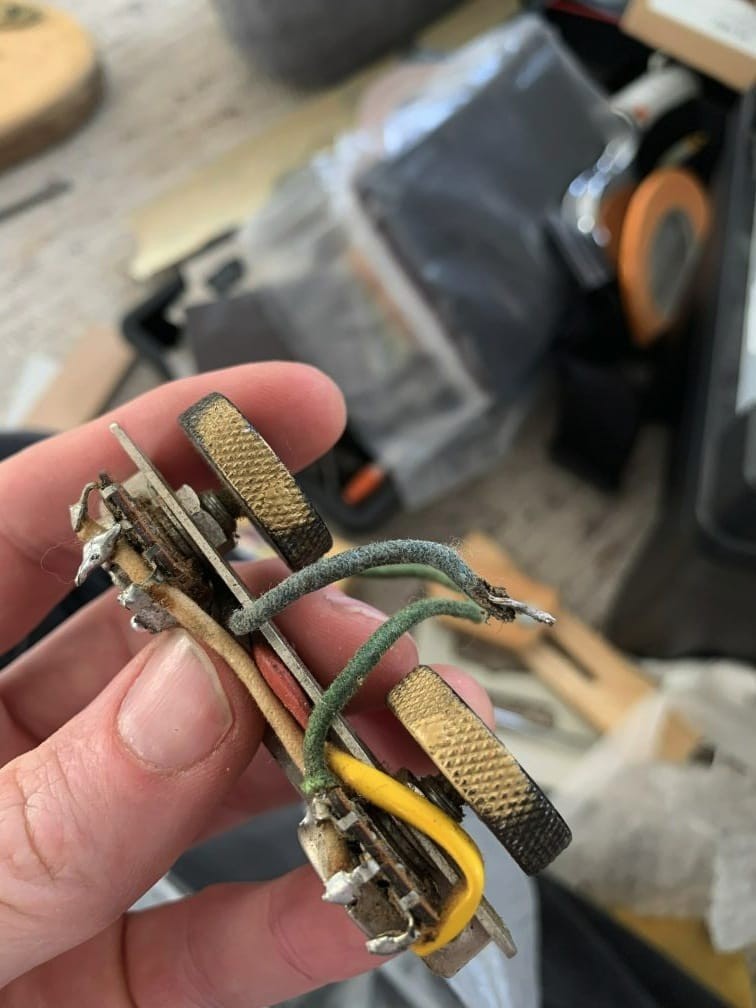 Also, it's amazing how much dead skin and organic matter can be in a guitar this old. 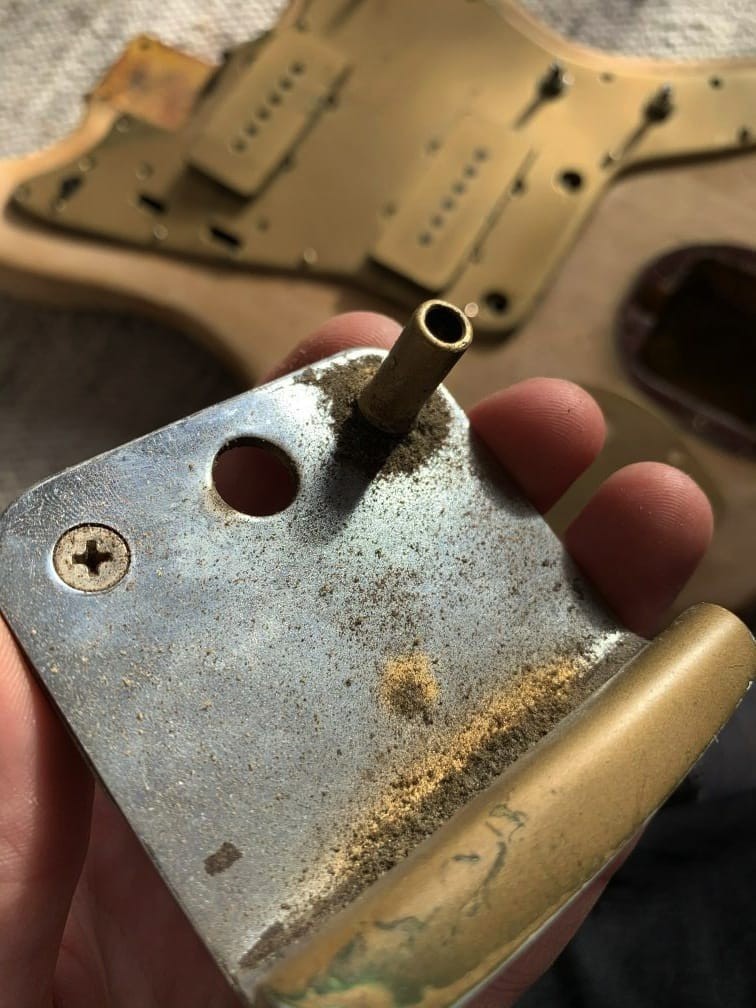 Frets are in pretty bad shape. They look like original, but well used. It will need a refret and it will be my first go at it. Kind of anxious about it, but there will be a lot of firsts on this renovation for me.

Ordered the correct 1966 decal from the states and also have some Inca Silver and vintage tinted clear nitro coming my way. A couple of years ago and with the gracious help of our very own Despot (still around?) I bought a AV65 in Aztec Gold, my number one to this day. It will be a perfect match, I'm sure. Goldie & Silvie. Dream team!

I'm sure there will be a lot of questions and hopefully not so many hickups along the way, but I'm really looking forward to this.
It'll be a slow project, but will update whenever there's progress.
Hope you'll enjoy the process as much as I do!
Top

Amazing find! Looking forward to seeing how this one turns out.
Top

I'm enjoying seeing the gradual improvement.
The tailpiece looks much better now than it did before.
You think you can't, you wish you could, I know you can, I wish you would. Slip inside this house as you pass by.
Top

Dude I was gonna get this one too!!!
Glad that someone here got it.

Gruß aus Köln!
i love delay SO much ...that i procrastinate all the time.
Top

Thanks for the encouragement!

Wow and sorry having snagged it just before you. I was really lucky, because I was mostly chasing synths when it just popped up.
When I phoned the man I didn't even expect to hear anything other than: "Sorry, your the 20th person to call, it sold within minutes."

Anyways, on with the restoration. 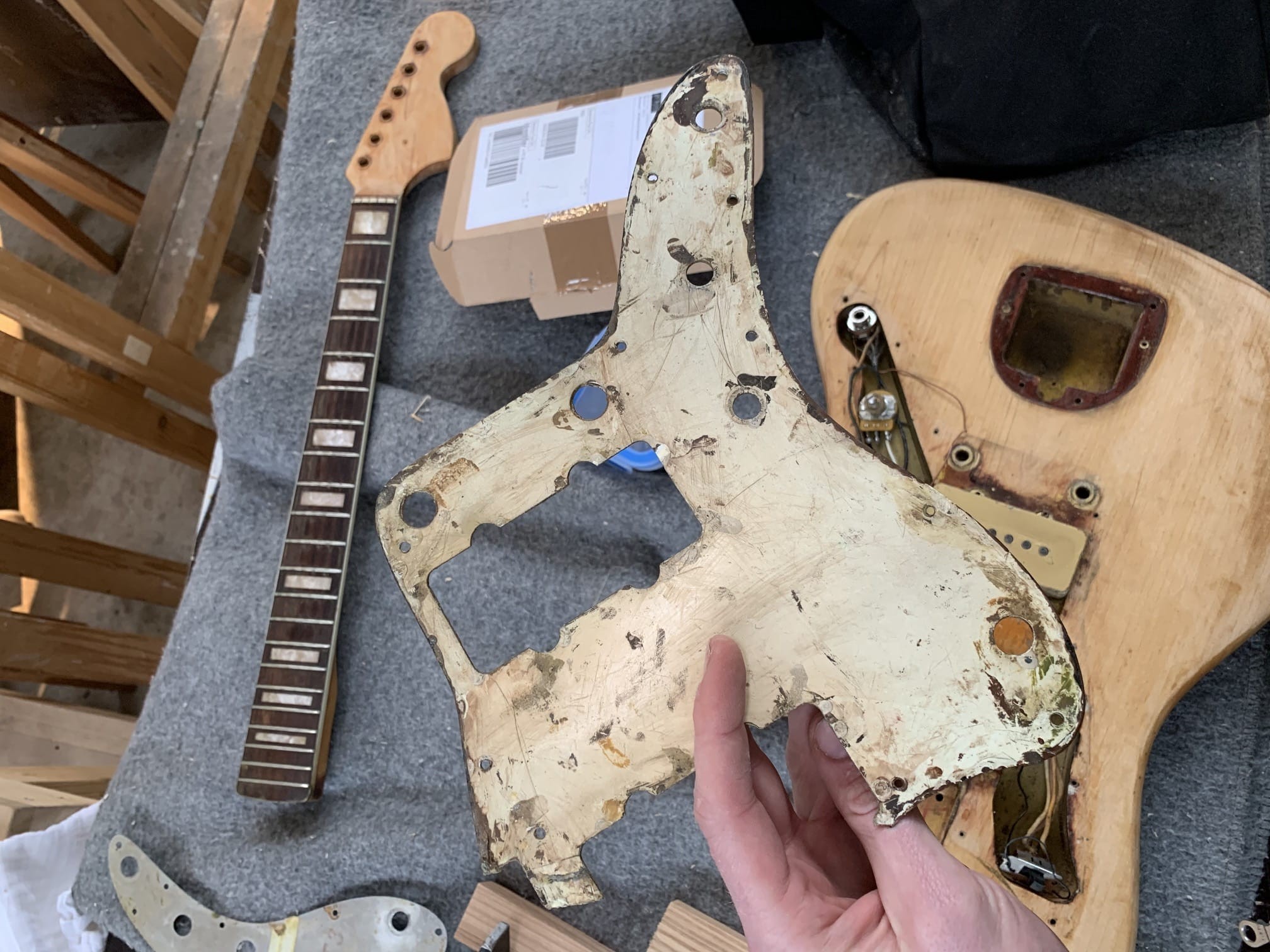 It's tort! Now, I'm excited. I'm slightly amused by the fact I have all eras of pickguard colors in one pickguard. '58/'59 gold, tortoise and custom color white pickguard. 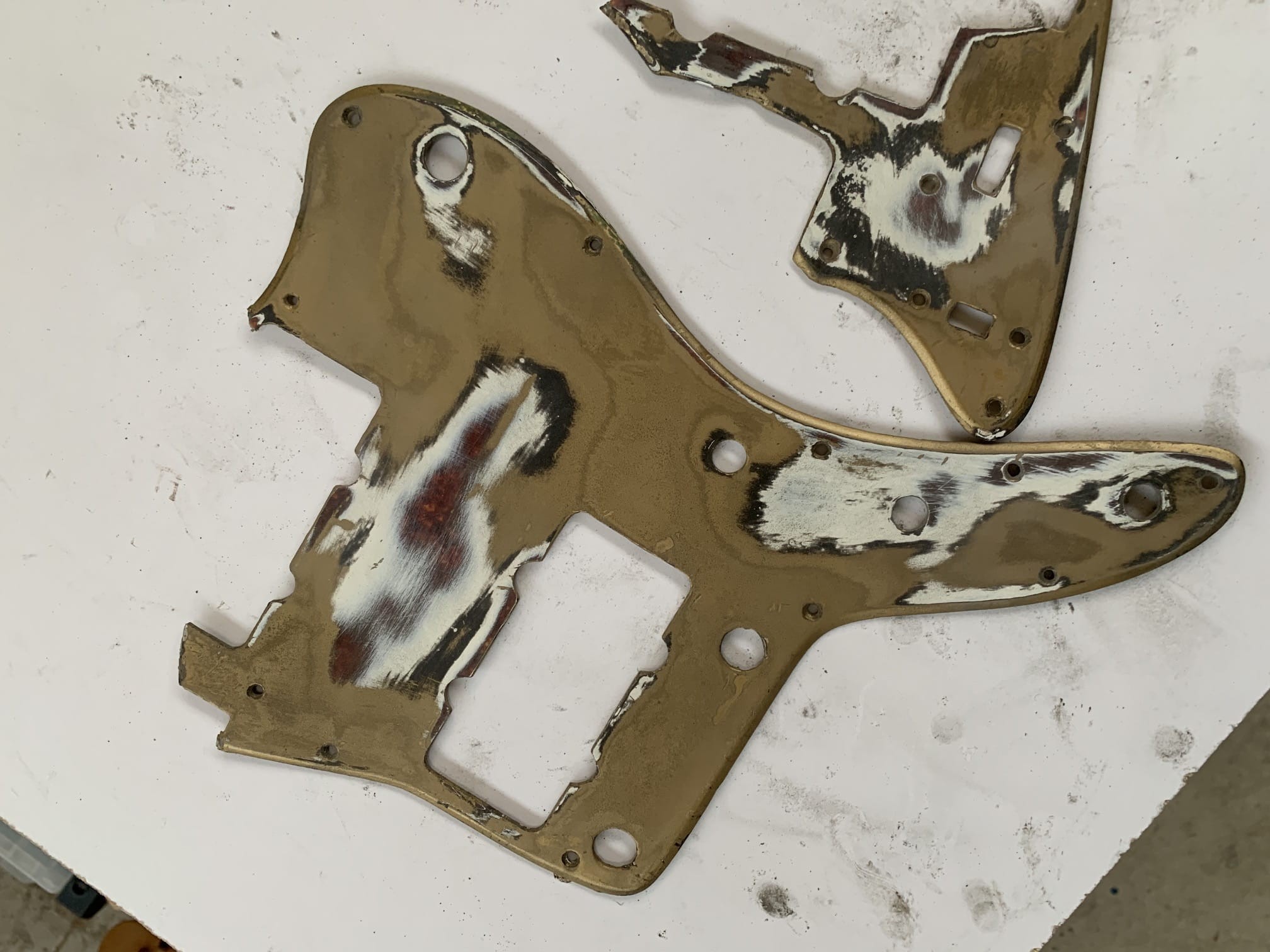 Maybe I should keep it that way... or... maybe rather not.
Exactly 943.32 hours of delicate sanding later: All rough from the 320 grit sanding: 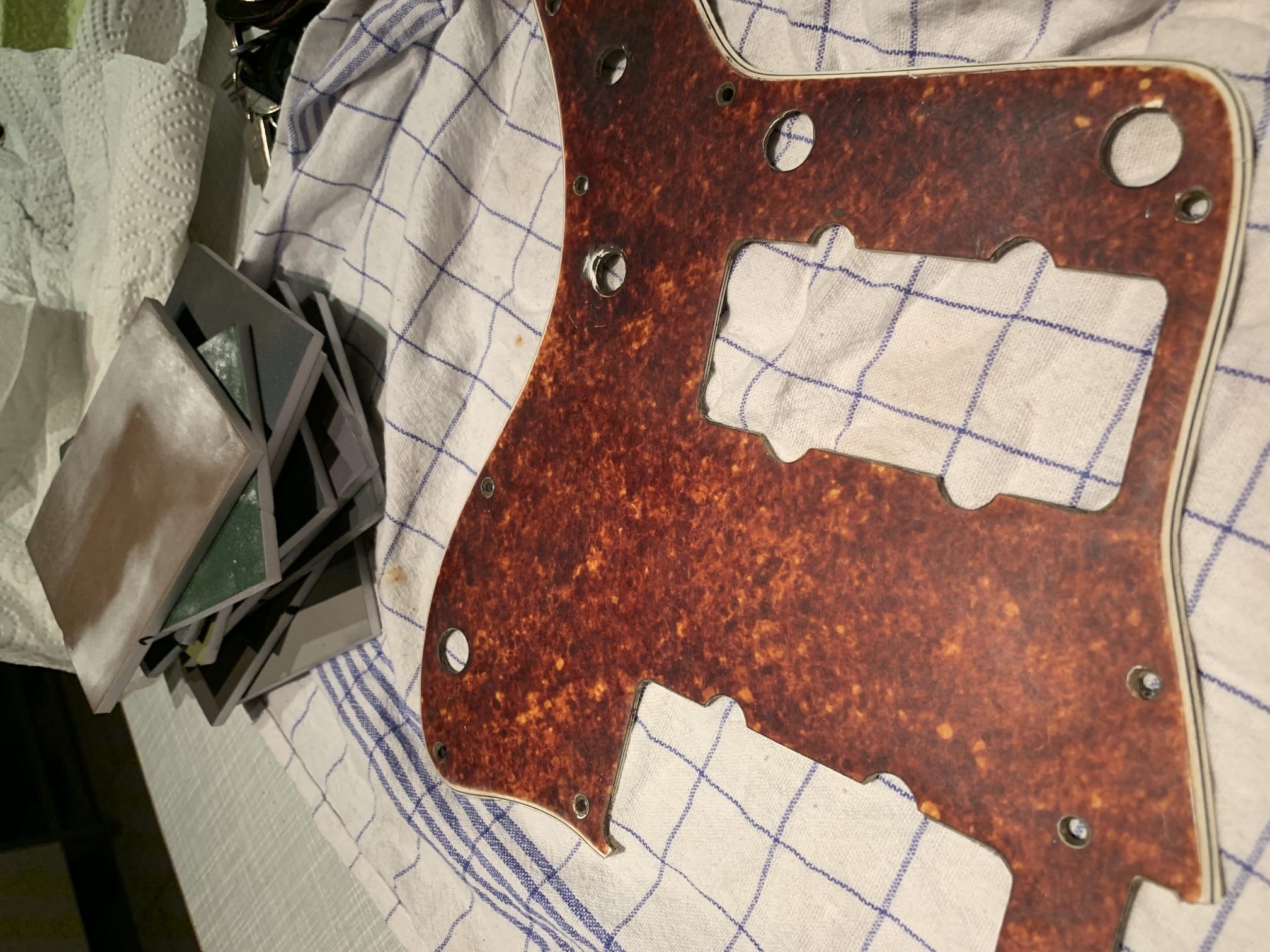 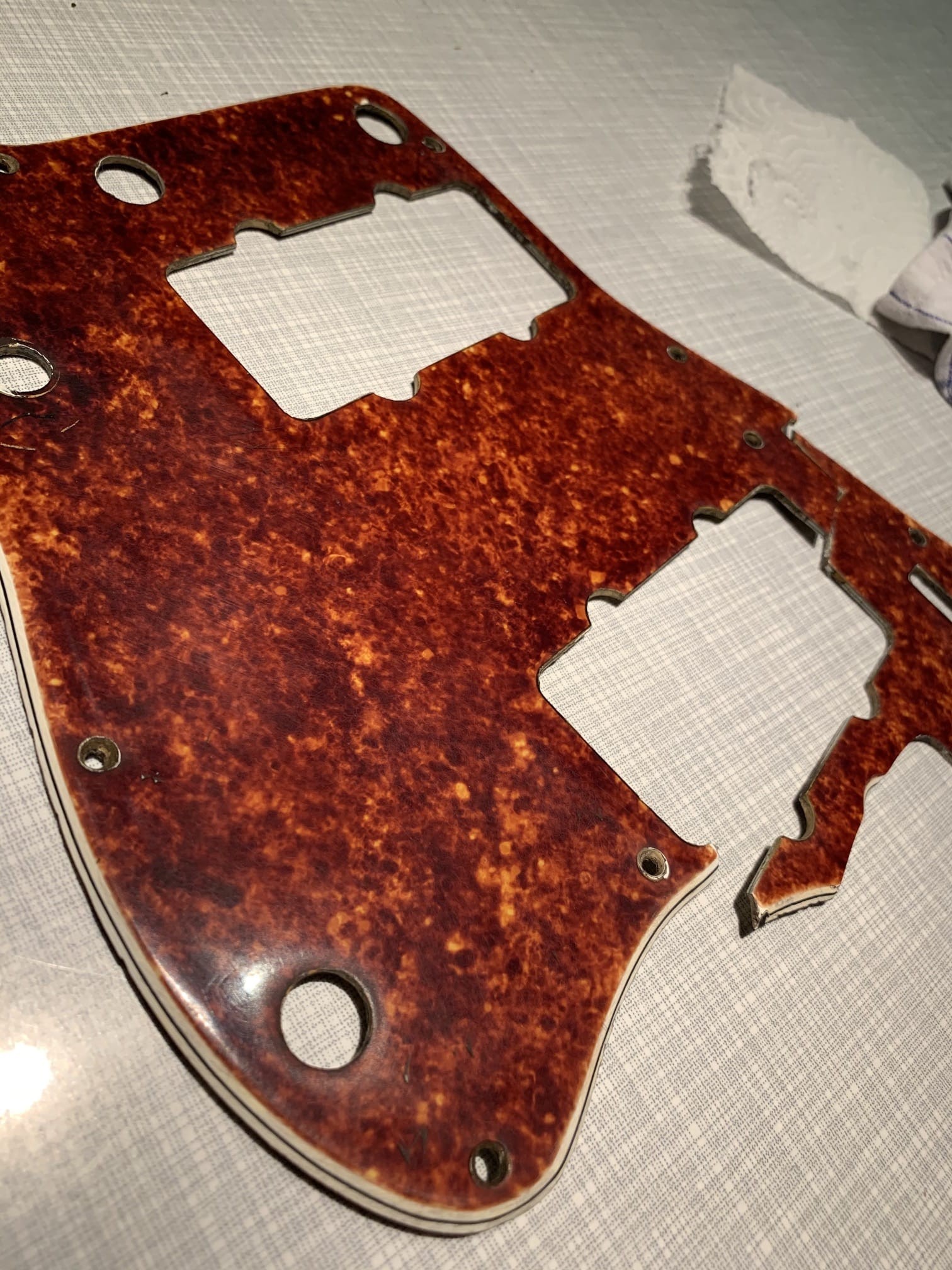 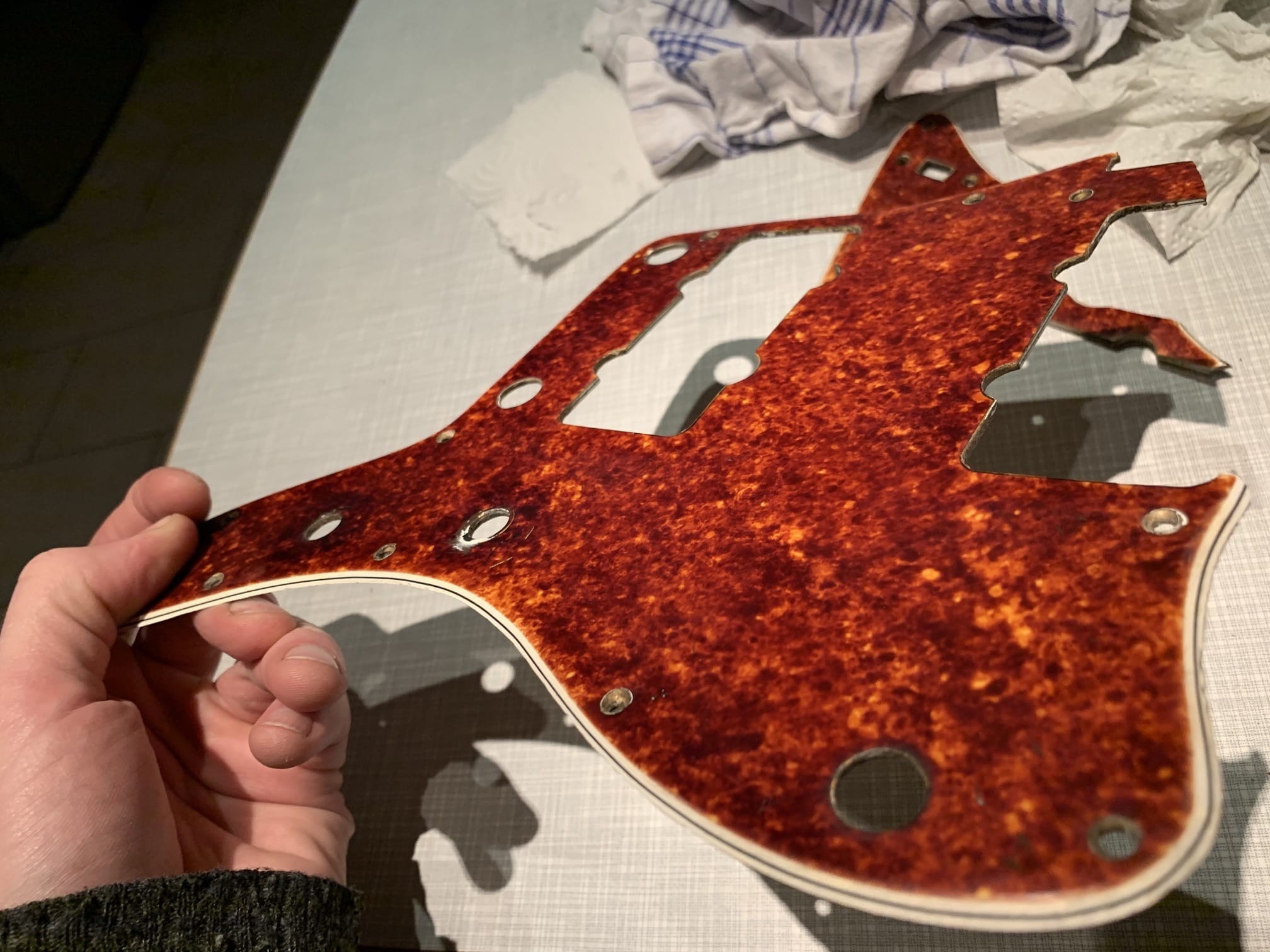 Couldn't be happier how it turned out. I'm going to keep the fine swirl marks, because it's supposed to look like a 50+ year old guitar, not like a new one. One thing I'm not sure is how to glue the crack in the pickguard. Any ideas?

I know, melting it together with acetone works, but there's a 1mm gap between the two parts from shrinking. I'm thinking reinforcing from behind and super glue, but has anybody tried? Or better use epoxy?

I even had the idea of melting cellulose nitrate in acetone, tinting it red and filling the gap.
Will super glue and a thin sheet of backing material be strong enough or too brittle?
Adding micro beads to the superglue will make the glue opaque, which I don't want.
This is where I'd love to hear some input from the pros!

Now, on with the pickup covers. Unfortunately, they've once received the same gold-black-white treatment. More sanding. Kind of seeing where this restoration is going. Sanding, sanding, sanding. Can't wait to be sanding the body, the neck, the primer, the clear coat, the fretboard, the fret ends and whatnot. It's completely nuts! 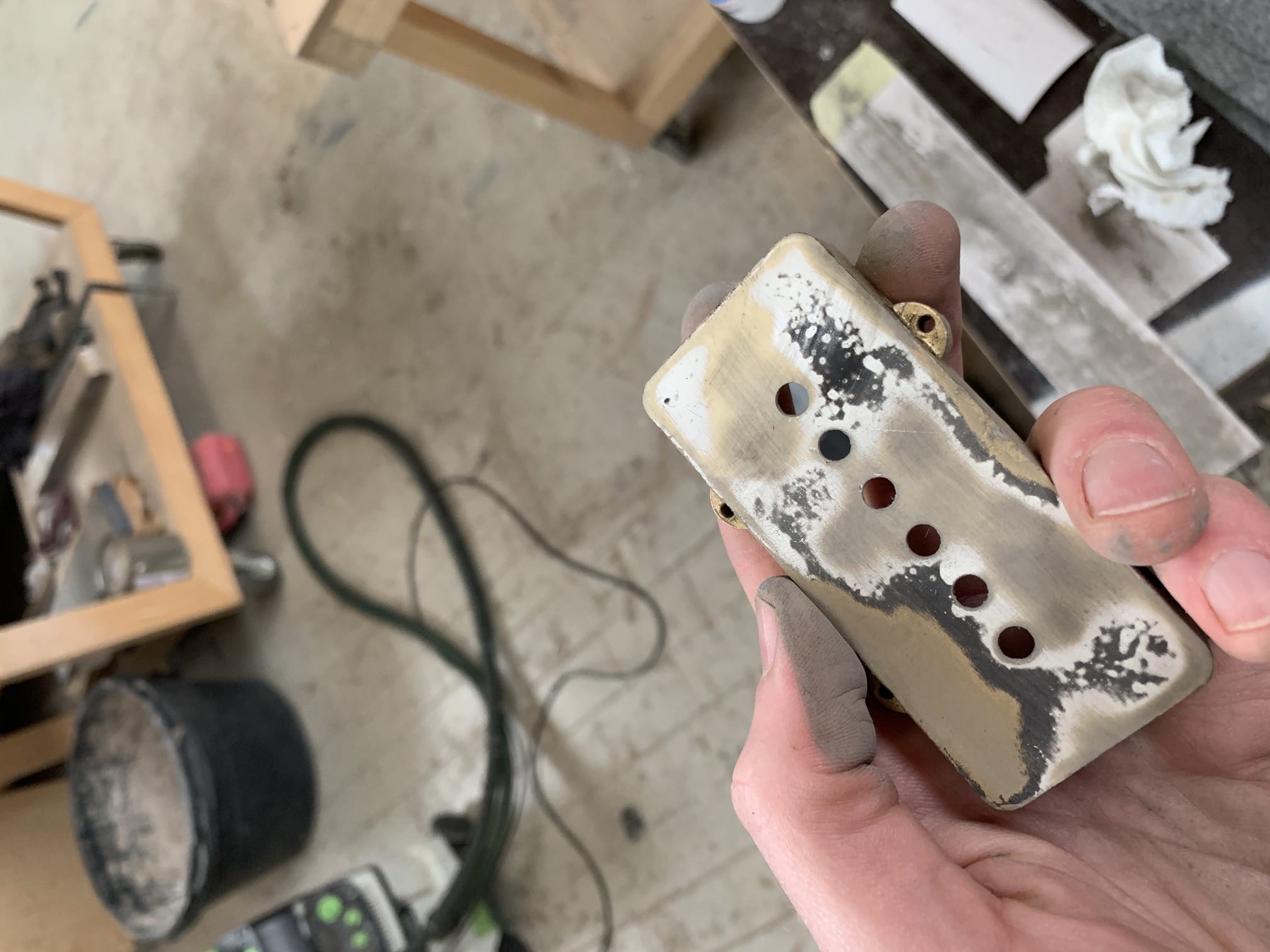 Intermediate result before I had to call it a day: I'm pretty happy how this is coming along. I'll clean up the pickup covers over the next days and prep the body and neck for spraying. Meanwhile, I've received the nitro paint, but currently it's to rainy and cold, it might be some time until we get the right temperatures around here.
We'll see. So long for now!
Top

Wowee! I admire your patience sanding the pickguard. Well done!

I’m looking forward to seeing how this turns out.

Reminds me of this old one I once had: 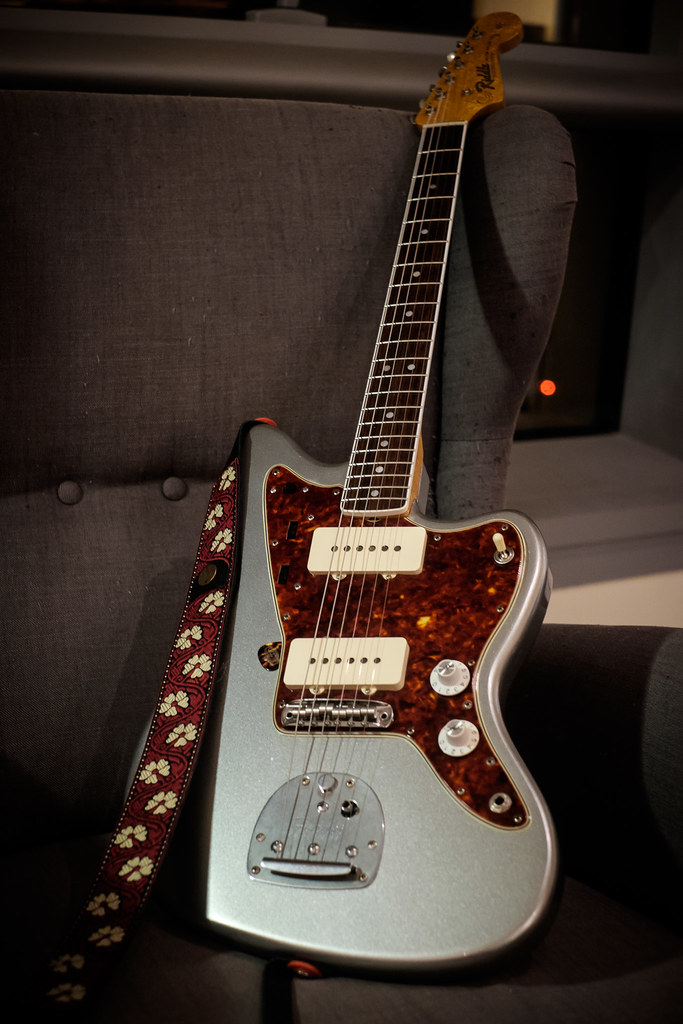 If that works, we'll find out shortly

But before that:
Any ideas about the questions regarding fixing the pickguard?
CA glue seems to be best, but I also ordered special cellulose nitrate glue – I'll do some tests before fixing the pickguard.
Also, I have some stuff called Solarez, it's UV curing epoxy resin I normally use to fix my surfboards. It's super strong, but not really best looking.

There must be somebody here who has a tried and proven way of glueing tort?!
Top

Nice save on the pickguard!
Top

i remember you from the old days!

neat project, and what a steal... excited to see where this goes.
lying dog-faced pony soldier.
Top


Look, it's the infamous ES stamp. My offsetology is a bit rusty and the search function failed me on this.
What was that supposed to mean? Exhibition Showcase? Export Something? Extra-long Sustain?

I believe it's "Entered Special." I think the speculation is that it was a head's up to pay extra attention as the guitar was a dealer sample/trade show model/etc. It seems pretty common.
Top

maximee wrote: ↑
Wed Feb 19, 2020 6:44 am
Any ideas about the questions regarding fixing the pickguard?
CA glue seems to be best, but I also ordered special cellulose nitrate glue – I'll do some tests before fixing the pickguard.
Also, I have some stuff called Solarez, it's UV curing epoxy resin I normally use to fix my surfboards. It's super strong, but not really best looking.

There must be somebody here who has a tried and proven way of glueing tort?!

Why glue it? Keep the crack because that's part of its history.
It looks like you've got an aluminum shield under the guard. Why not use a piece of double sided tape to attach the pieces to that and it'll all stay in place. Just let it be what it is.

I almost thought it was a regular repro guard at first but the more I look at it, the more it starts to look like the real thing.

Nice choice of refin colour too. While I'm a bit of a purist when it comes to tort guitars, some of those subtler metallic silvers & golds look great!
You think you can't, you wish you could, I know you can, I wish you would. Slip inside this house as you pass by.
Top
Post Reply
51 posts