Bringing your older offset back to life.
Post Reply
15 posts • Page 1 of 1

Long time lurkers like myself are probably already familiar with the fabled "Competition Burgundy" (sometimes called purpleburst) finish Fender released on its first run of competition stangs introduced in 1969. This was a very short lived finish, as Fender had ditched the purple burst by 1970, presumably due to QC/fading issues as many examples have a considerably faded burst, sometimes barely looking purple at all. Fender confusingly continued to call the finish "burgundy" in catalogs for at least a couple years, despite the color just being blue post-1970.

There are lots of people on the interwebs who claim the purple burst never existed and is a result of UV aging to the paint. There are two problems with this theory; When lacquer is exposed to UV rays, it yellows. Blue plus yellow equals green, not purple. There is not a single thing i can think of that would cause blue paint to turn purple, other than spraying red or purple on top of it. There are also rare examples of purpleburst out there with almost no wear, yellowing, or aging to speak of, so it would seem the burst would have had to come from the factory. My hypothesis is that a transparent burgundy/red edge burst was sprayed over the standard lake placid blue base coat, which turned the blue to a purple-ish hue. This would explain why they called it "comp. burgundy" rather than something like "comp. purple burst" which might seem a more fitting name. 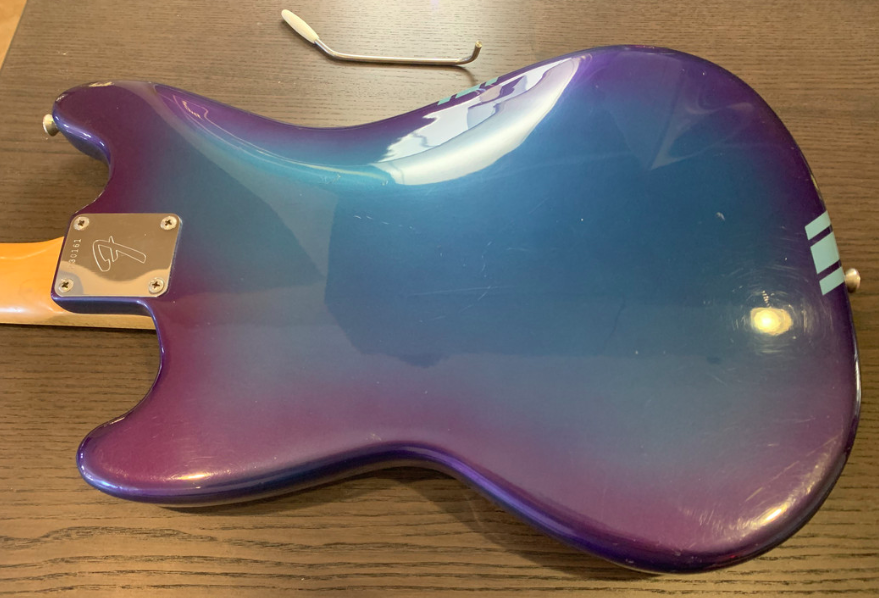 However it came to be, Competition Burgundy is undoubtedly my favorite Fender finish. It seems lots of people agree as original examples fetch upwards of $5000 these days. Many people have attempted to spray this elusive finish, but I have never seen anyone who was able to really get the colors right. As I'm never one to back down from a challenge and i have had tons of requests for this color in the past, I decided its finally time to give it a go.

I started off with this Jagstang Done Right, which felt like a fitting model for my first comp burg finish. Using the leftover paint from my recent "iris metallic" Maverick project along with some cool turquoise, I sprayed my very first metallic burst finish! The colors turned out a little too light to be accurate, but it looked so cool i couldnt bring myself to cover it up. This first attempt proved to me if i could only nail down the right colors, i could perfect the vintage look and make that comp burg mojo available to all! 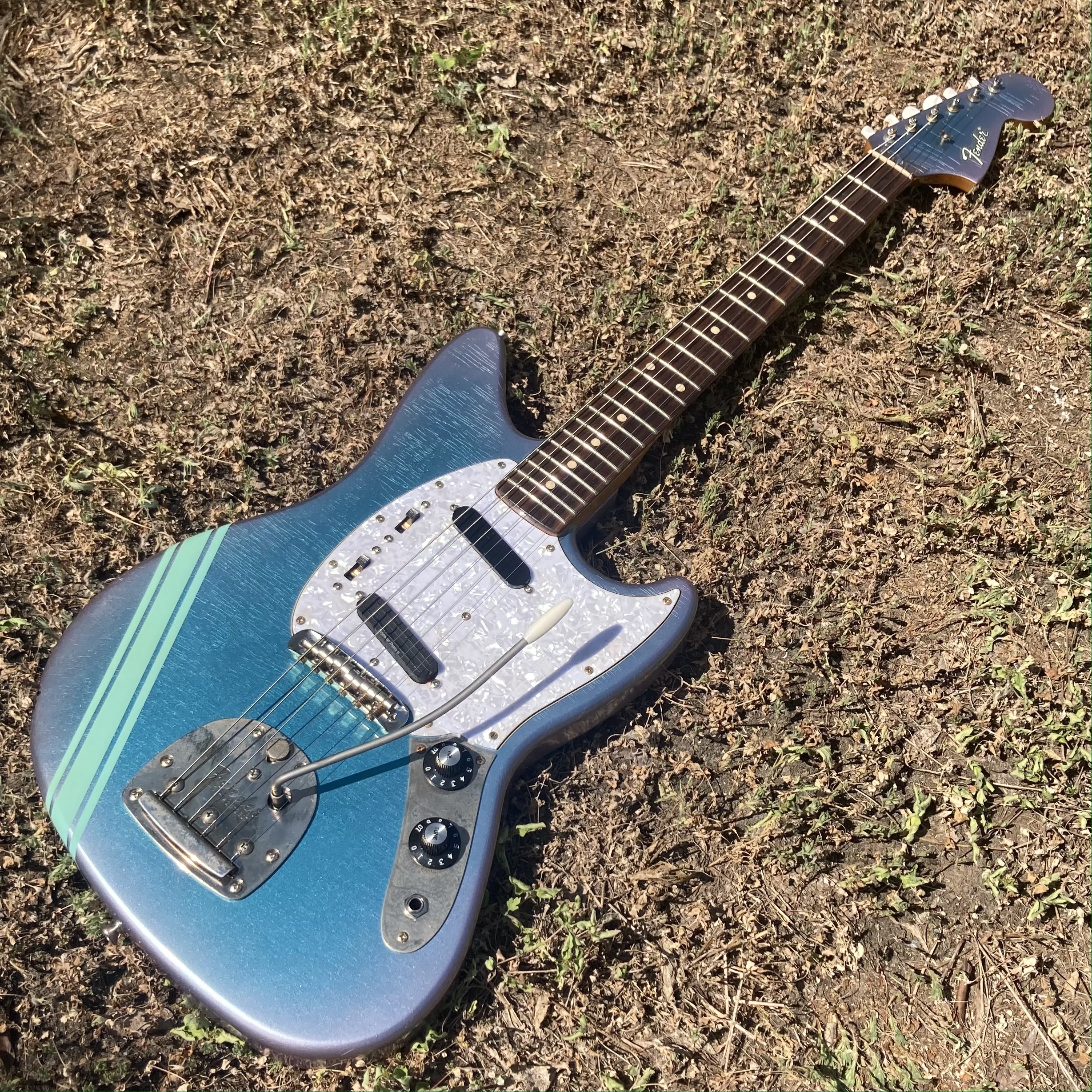 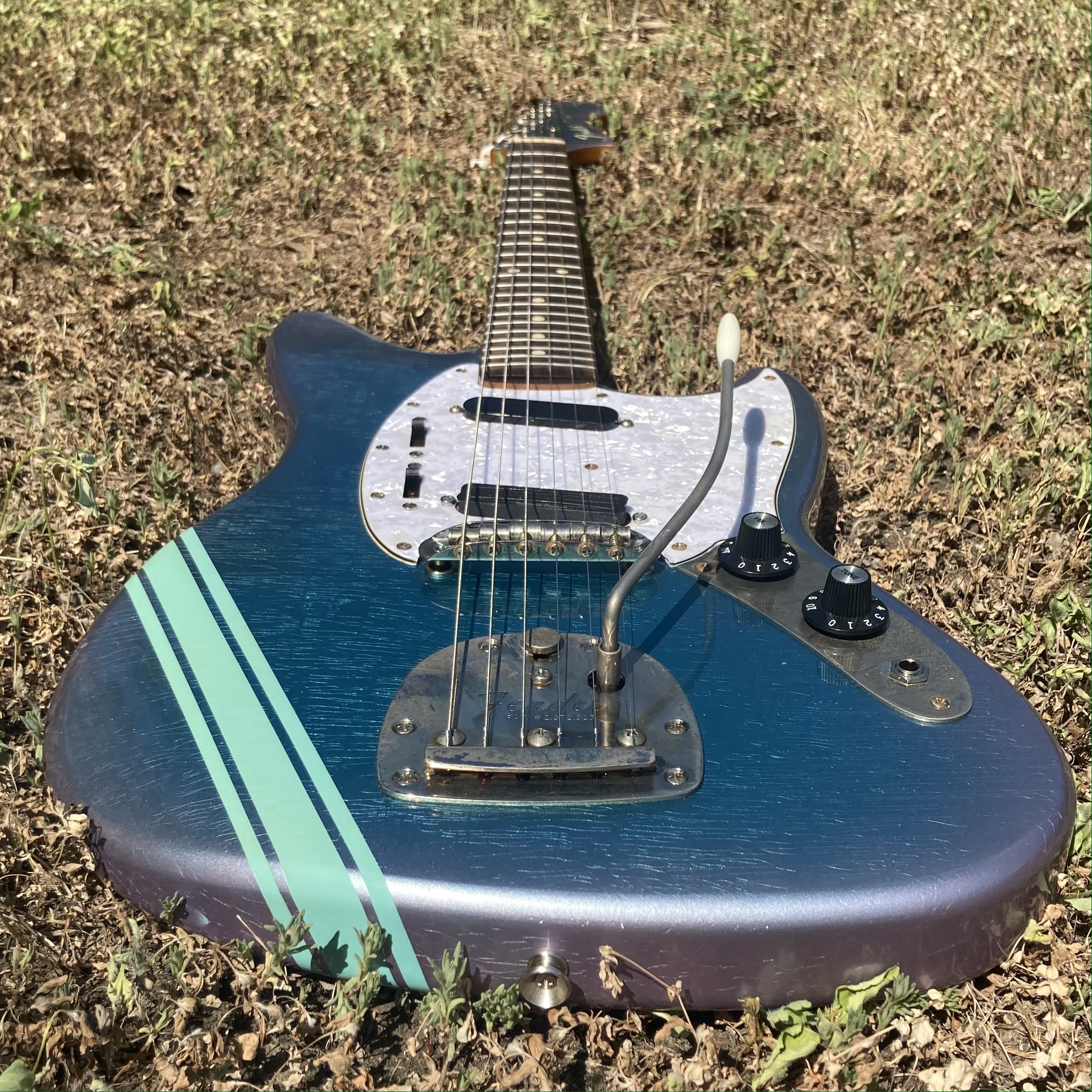 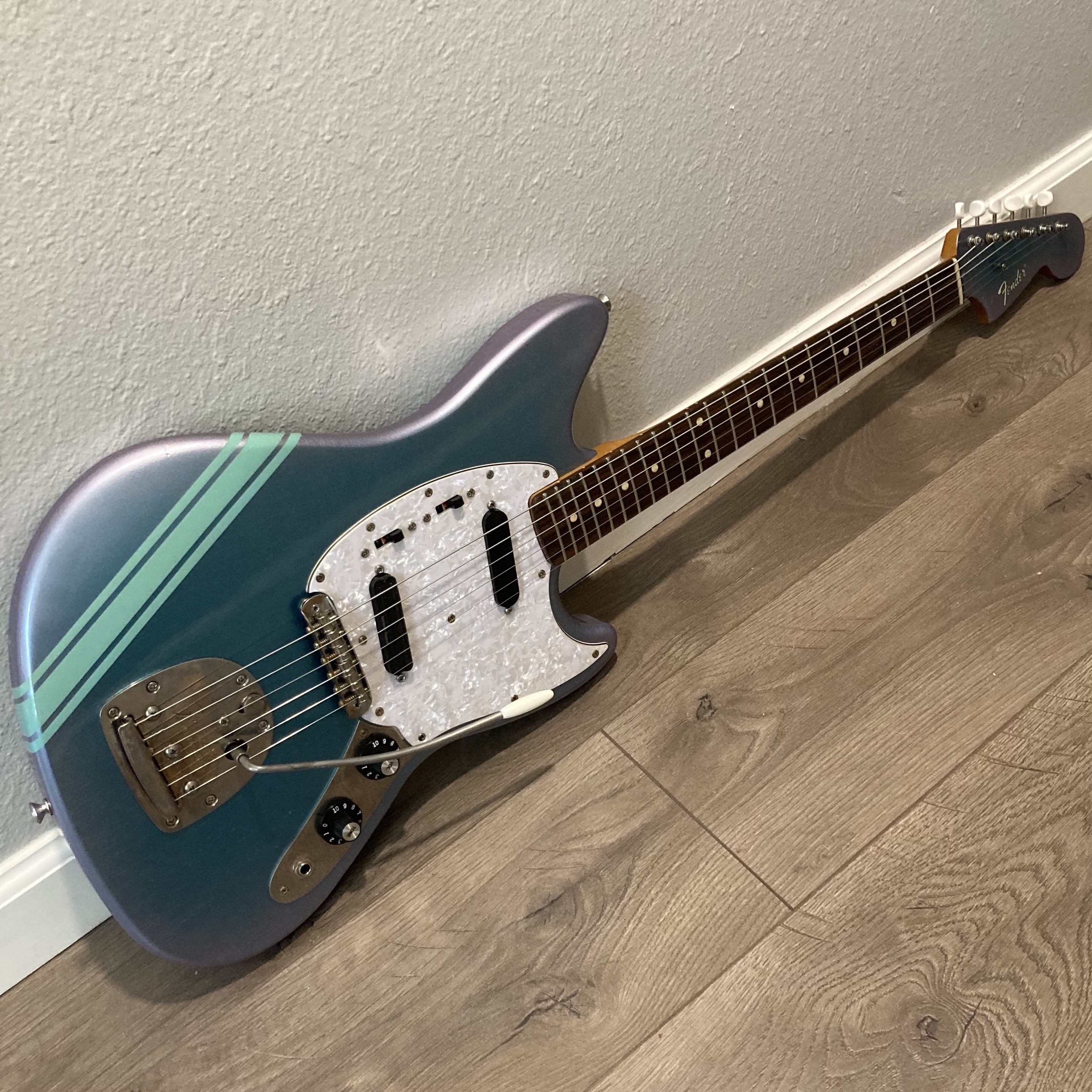 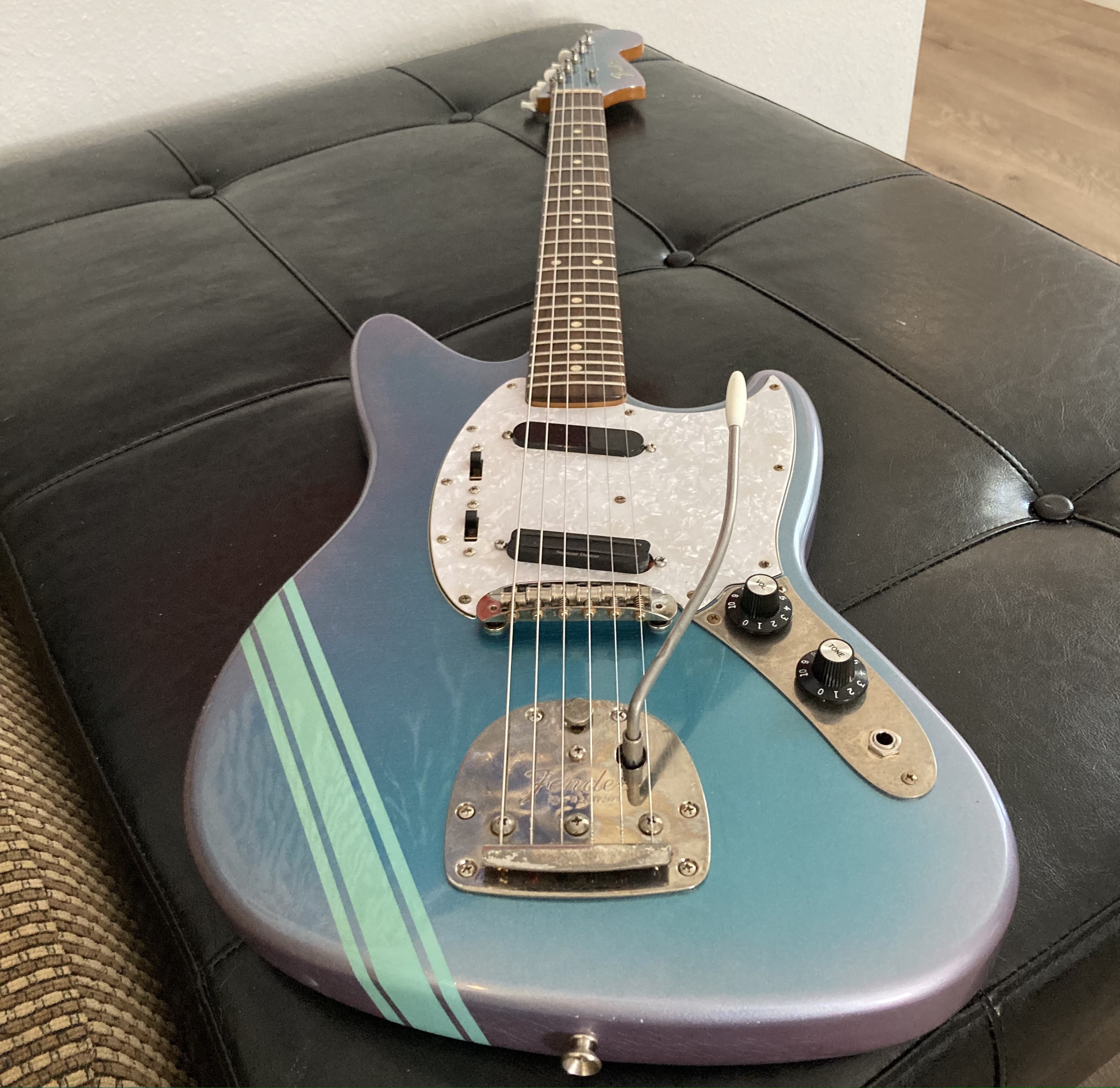 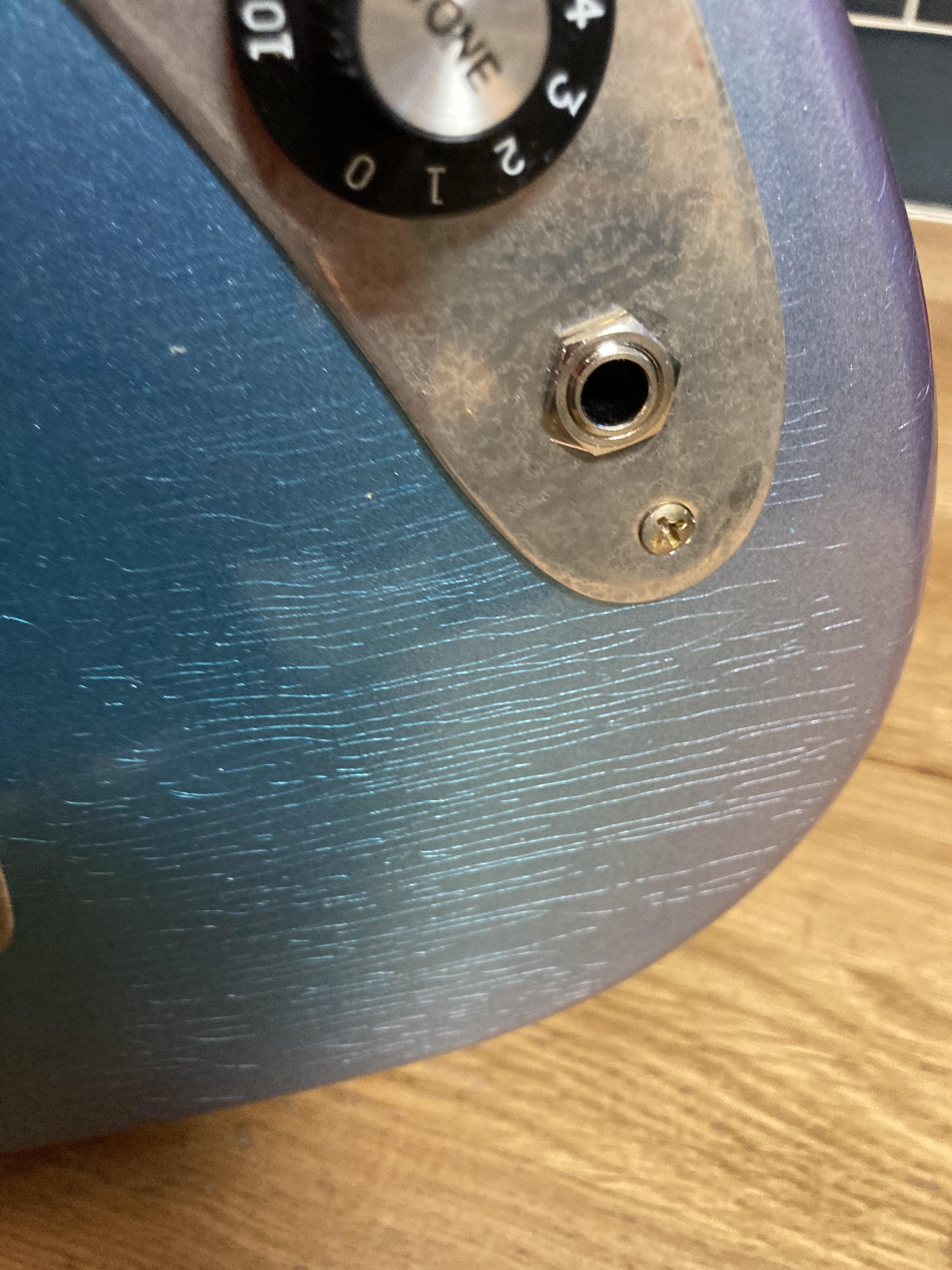 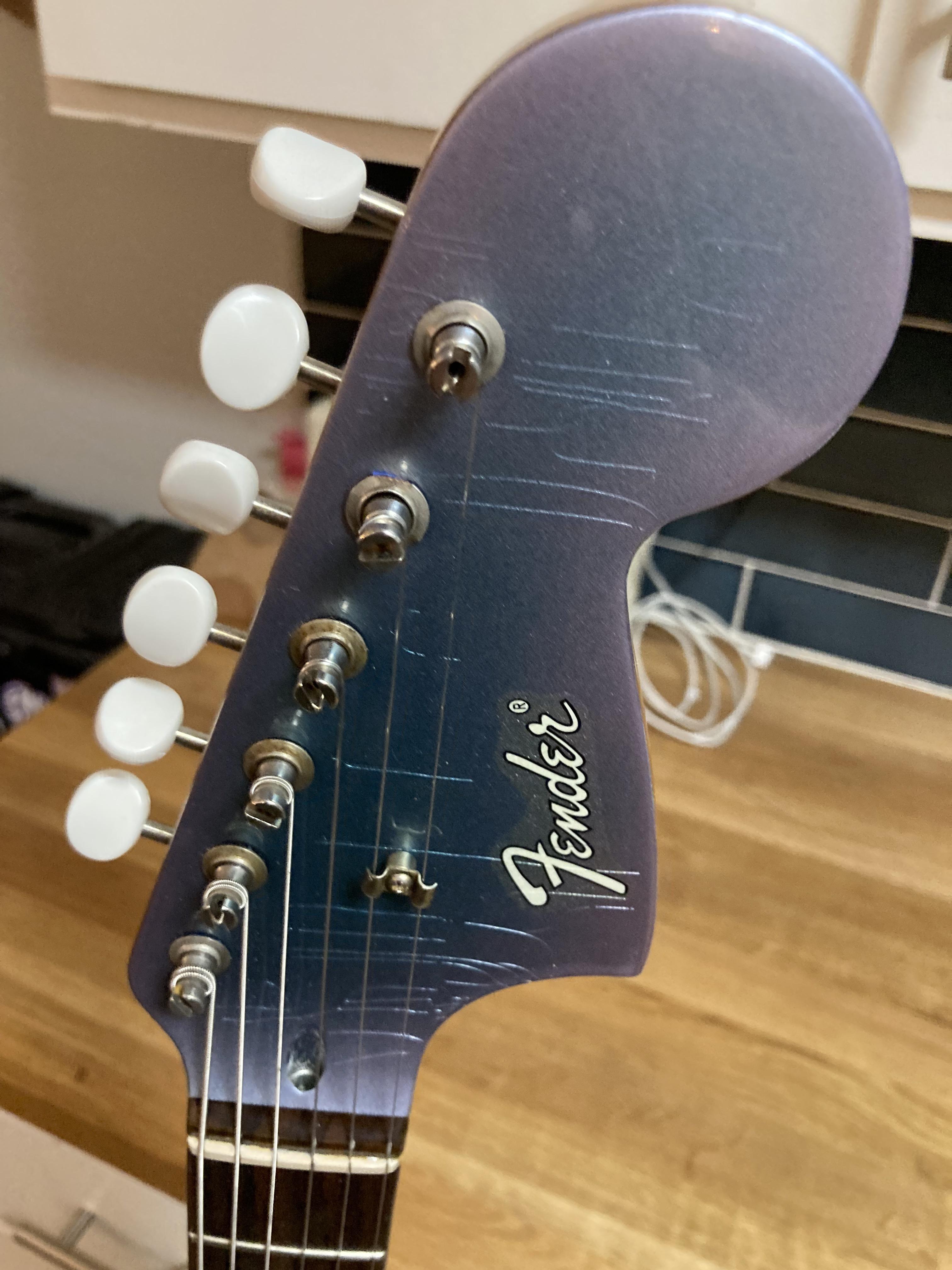 So although i was stoked with the above results, i became hungry, ravenous even for that vintage purple burst!!!

I went back to the paint shop the next day and worked with my paint pro pals to custom mix the perfect shade of purple, adding little bits of red, then blue until we got the right crown royal-y looking shade...

It just so happens that in the meantime, I found a killer deal on a 1966 Mustang that had been stripped of most of its original parts and refinished in a somewhat crappy competition blue attempt. Sent the link to Adam (our own Nocamping_4U) and he scooped it up to let me continue my comp burg experiments, and to restore to its former glory while we're at it.

I don't wanna show the full thing until its finished because its going to be a REAL stunner. But i'll post two little teaser pics comparing it with the jagstang headstock above and a vintage example to sate your curiosity.. Happy to say i consider this mission a success! 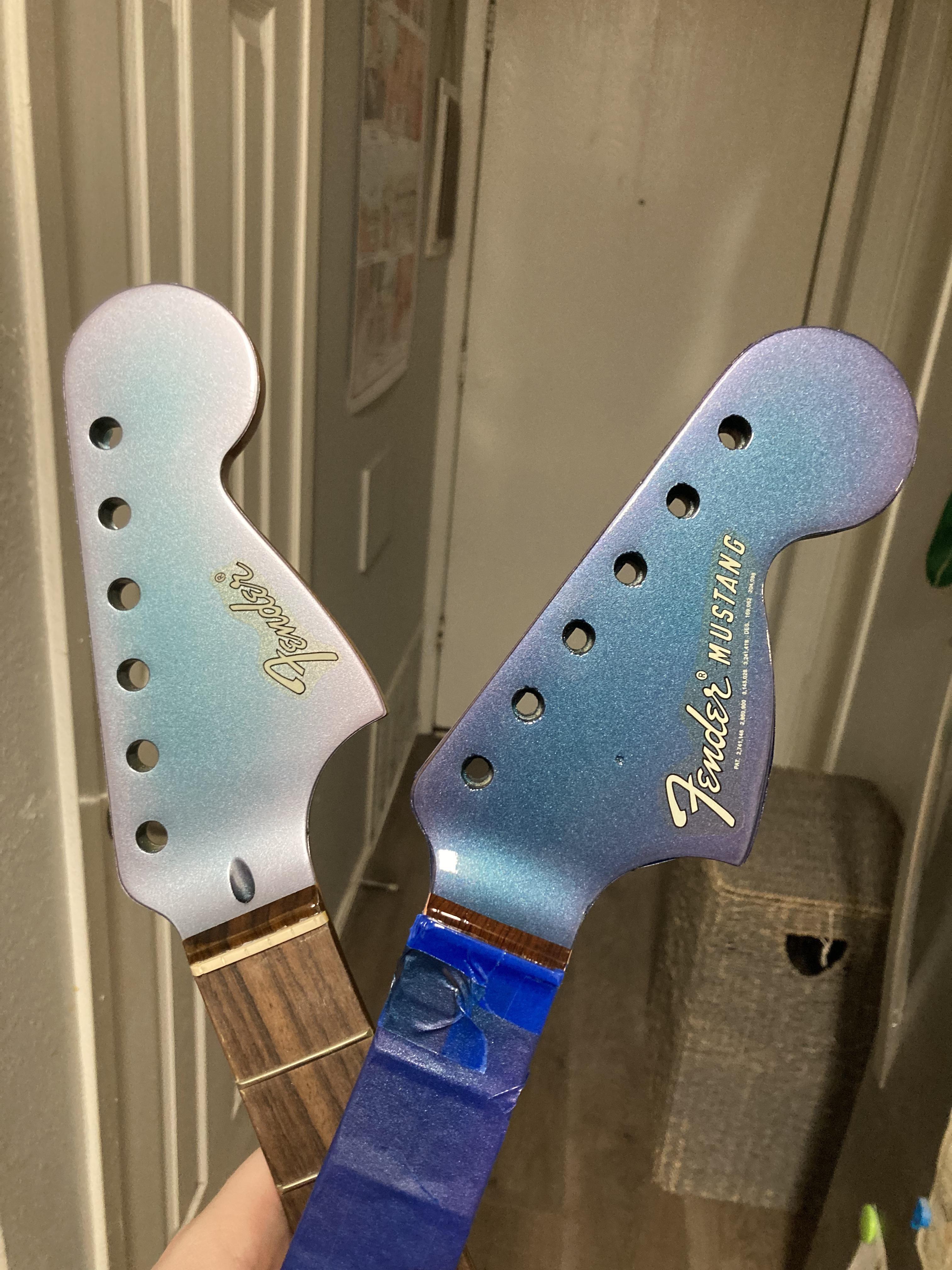 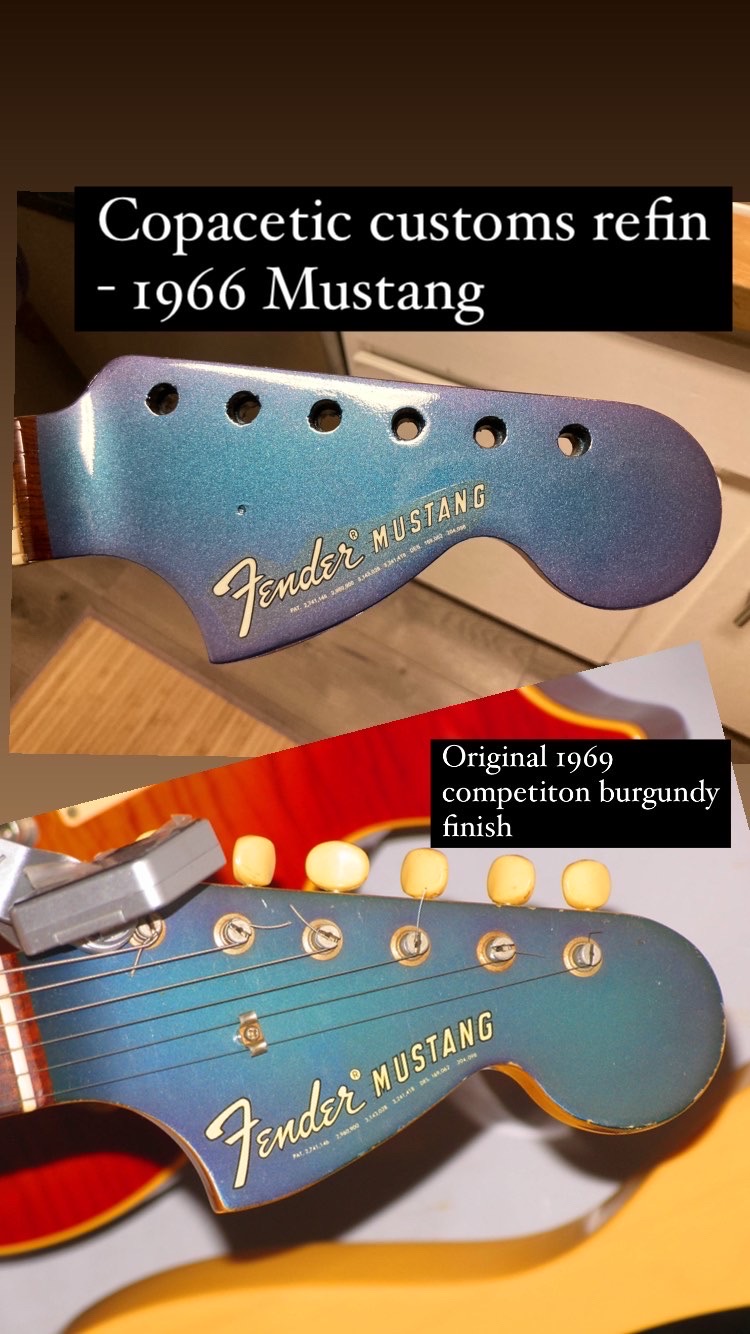 Stay tuned for the big reveal. Should only be a few days before im able to polish it up and slap it together

You definitely nailed it on the second one. That looks amazing.
Top

You got the colour pretty much right on the second one - it looks great!

However, i actually prefer the lighter ‘incorrect’ one from your first attempt. It has an almost silver look around the edges that i really dig.

In any case, it’s all great work, and i look forward to seeing the darker one completed.

Looks like you’re right on the money. Fender should bring it back, but they won’t do US Mustangs (besides the performer model), so I guess we’ll never see it.
Det er mig der holder traeerne sammen.
Top

The day has finally come ladies and germs!!!!!
Copacetic's first OG comp burg has been finshed up!
We ended up basially doing a full restore on this bad boy. It came to me in pretty rough shape, basically in pieces. Long gone were the original pickups, tuners, bridge/trem, plates, pickguard, switches, pots etc. The seller was a bit shady in hiding some of these details when we specifically asked, but could have just not known some of the parts werent legit i suppose. Either way we got it for a pretty nice deal in todays market considering we had a mostly original neck and original body. We sourced a new set of period correct white button F tuners, a vintage trem from a 71 stang, reissue bridge and pickguard aged by yours truly to match the age of the rest of the parts, and as soon as i saw it all put together and strung up, i immediately fell in love with this finish all over again! Let me know what you guys think could be improved on to get closer to the original finish, im always open to constructive criticism 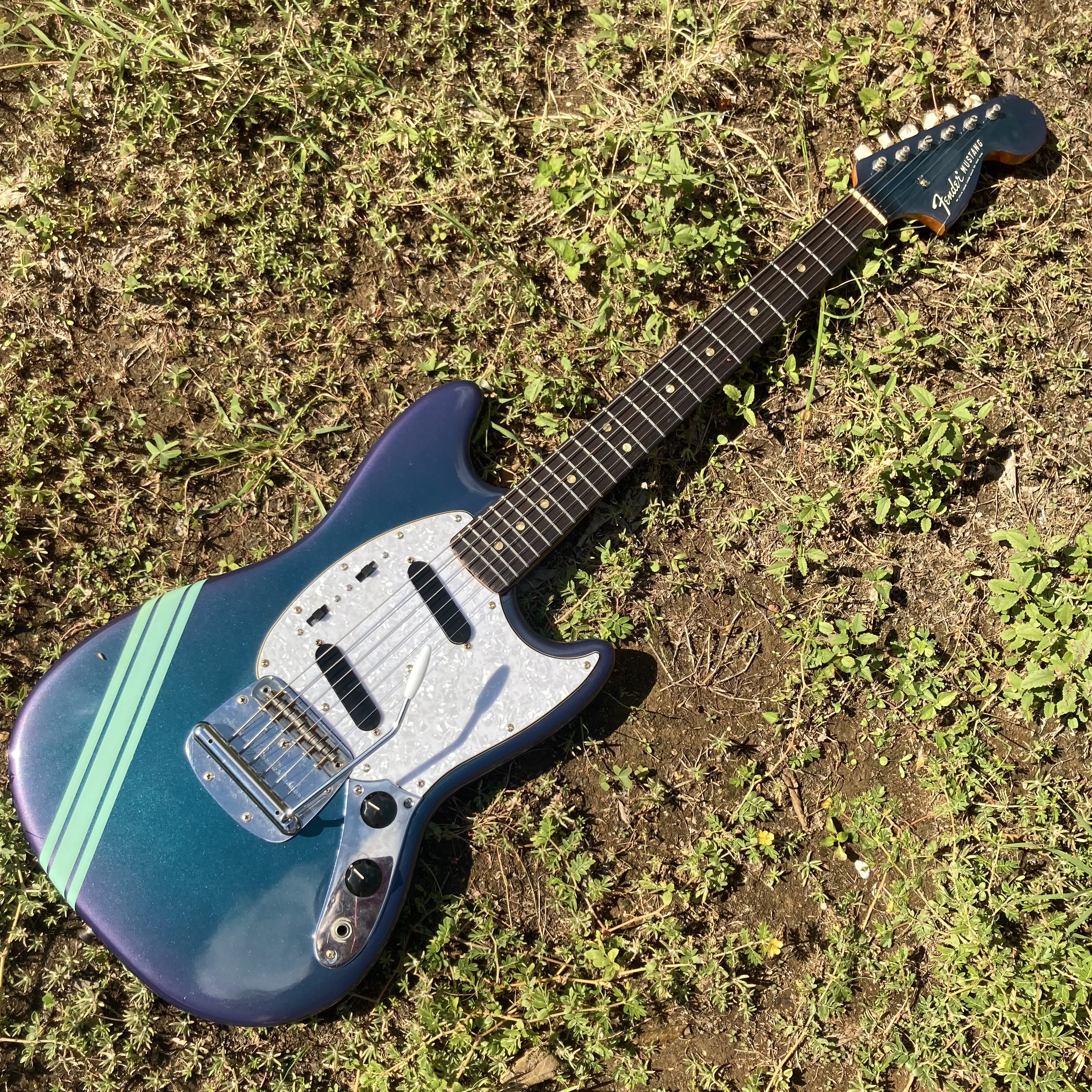 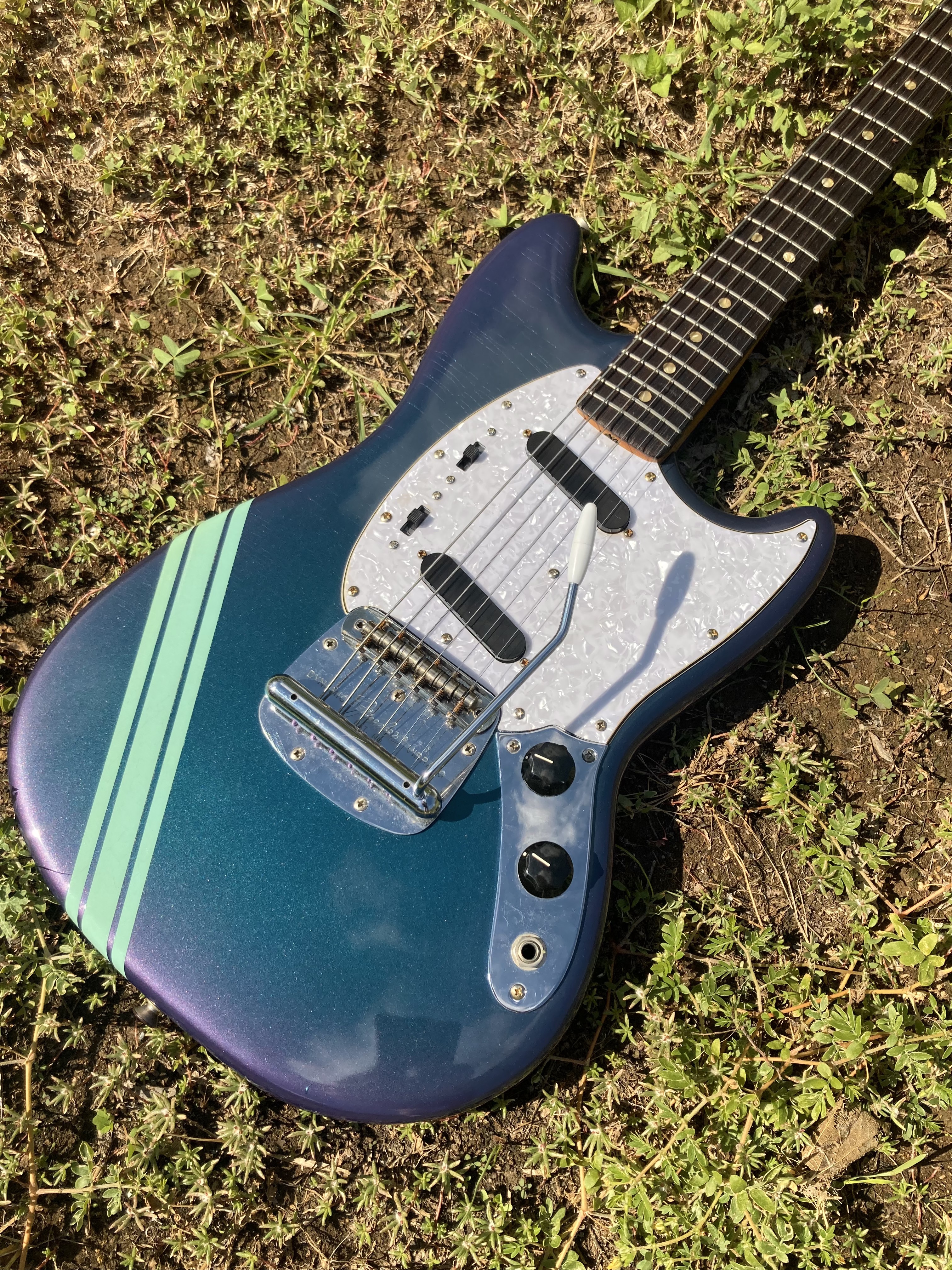 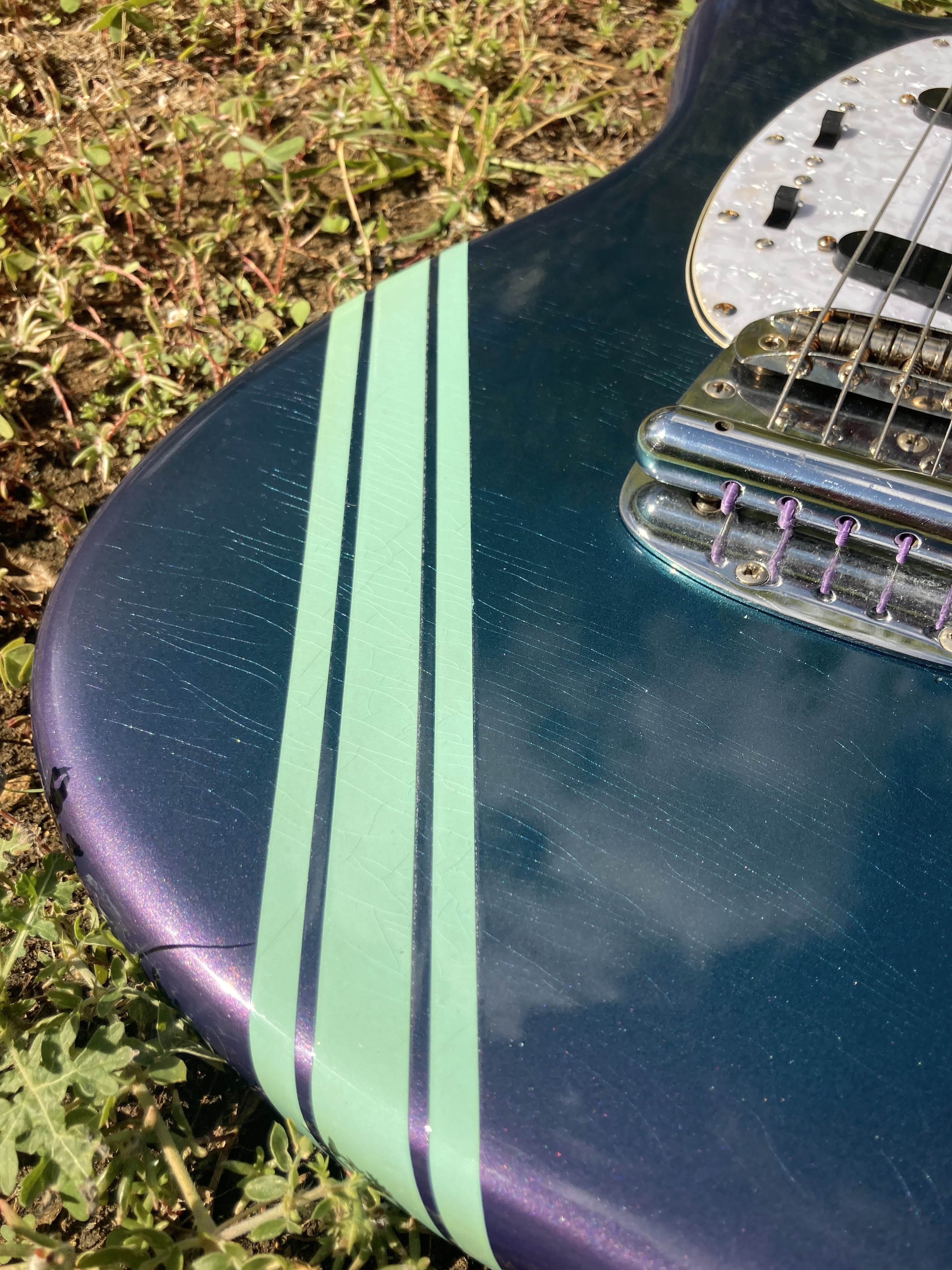 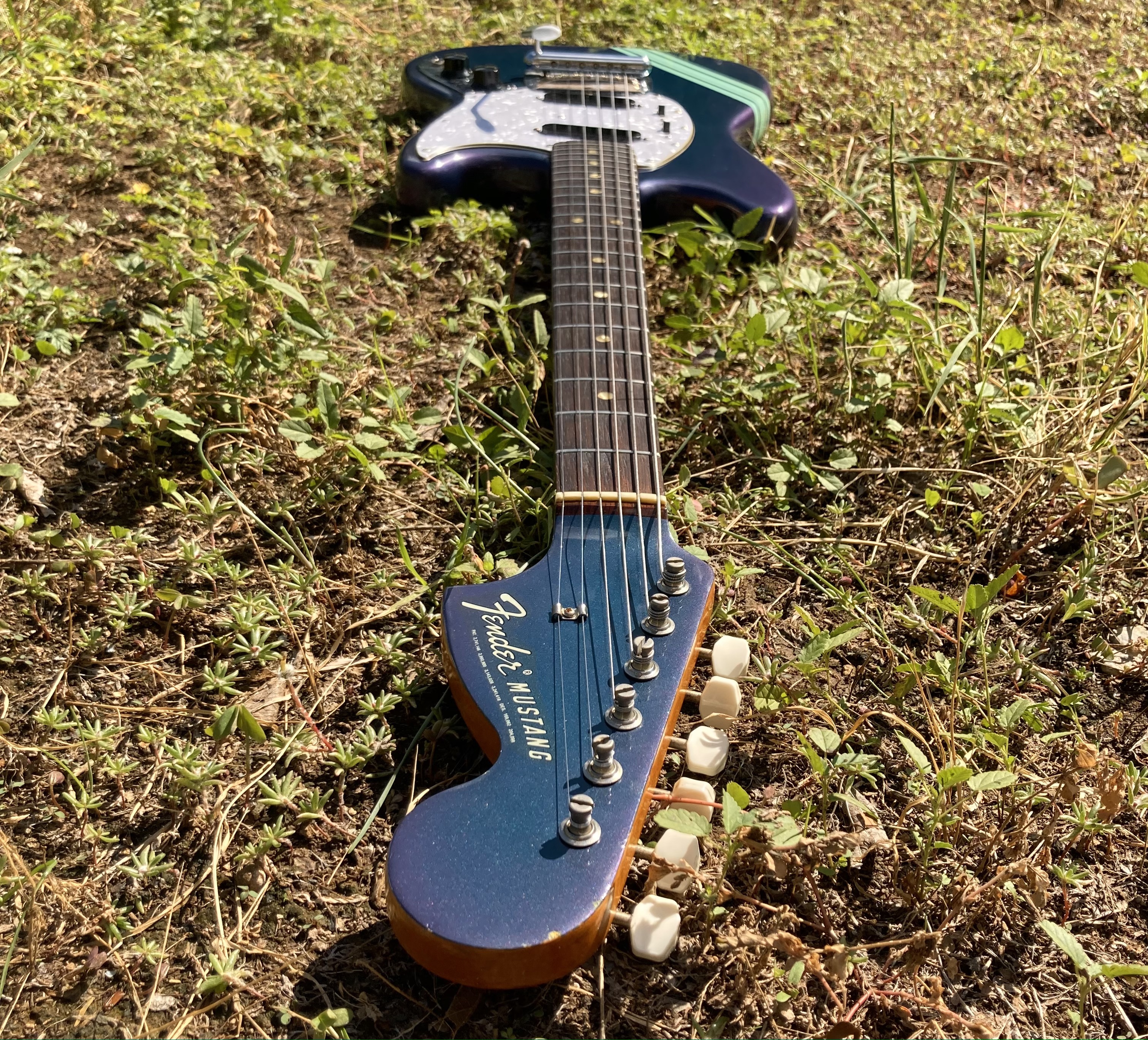 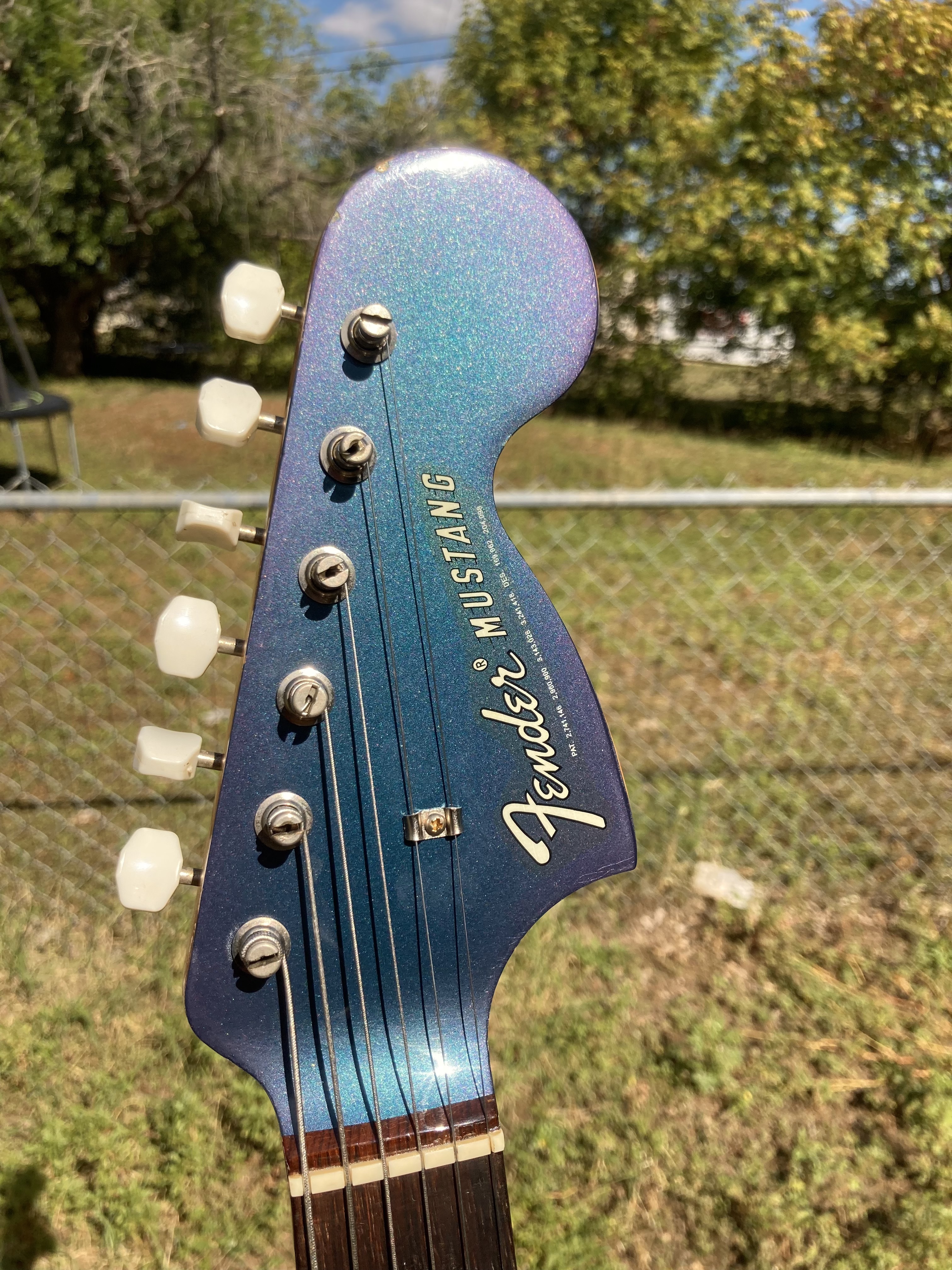 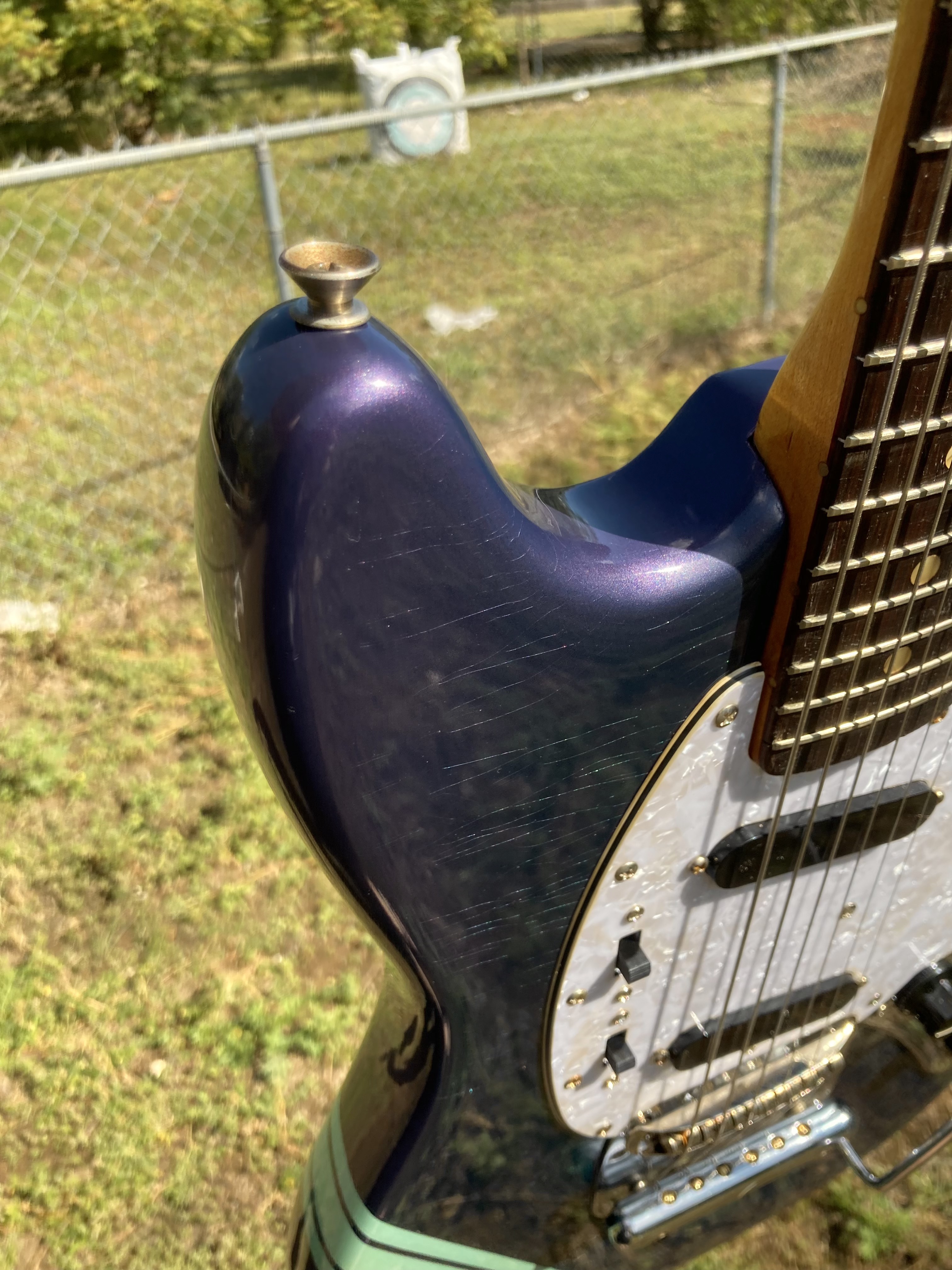 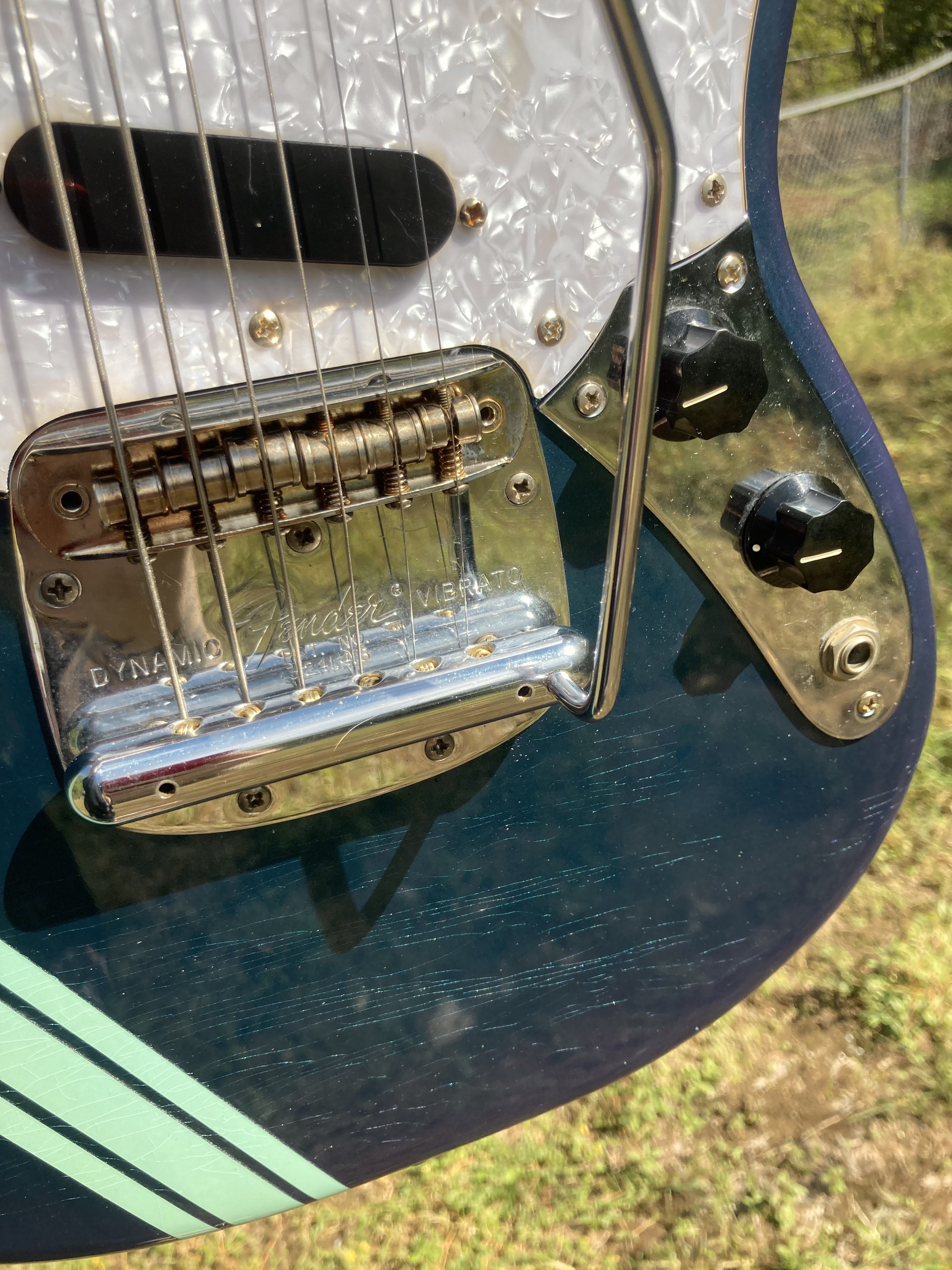 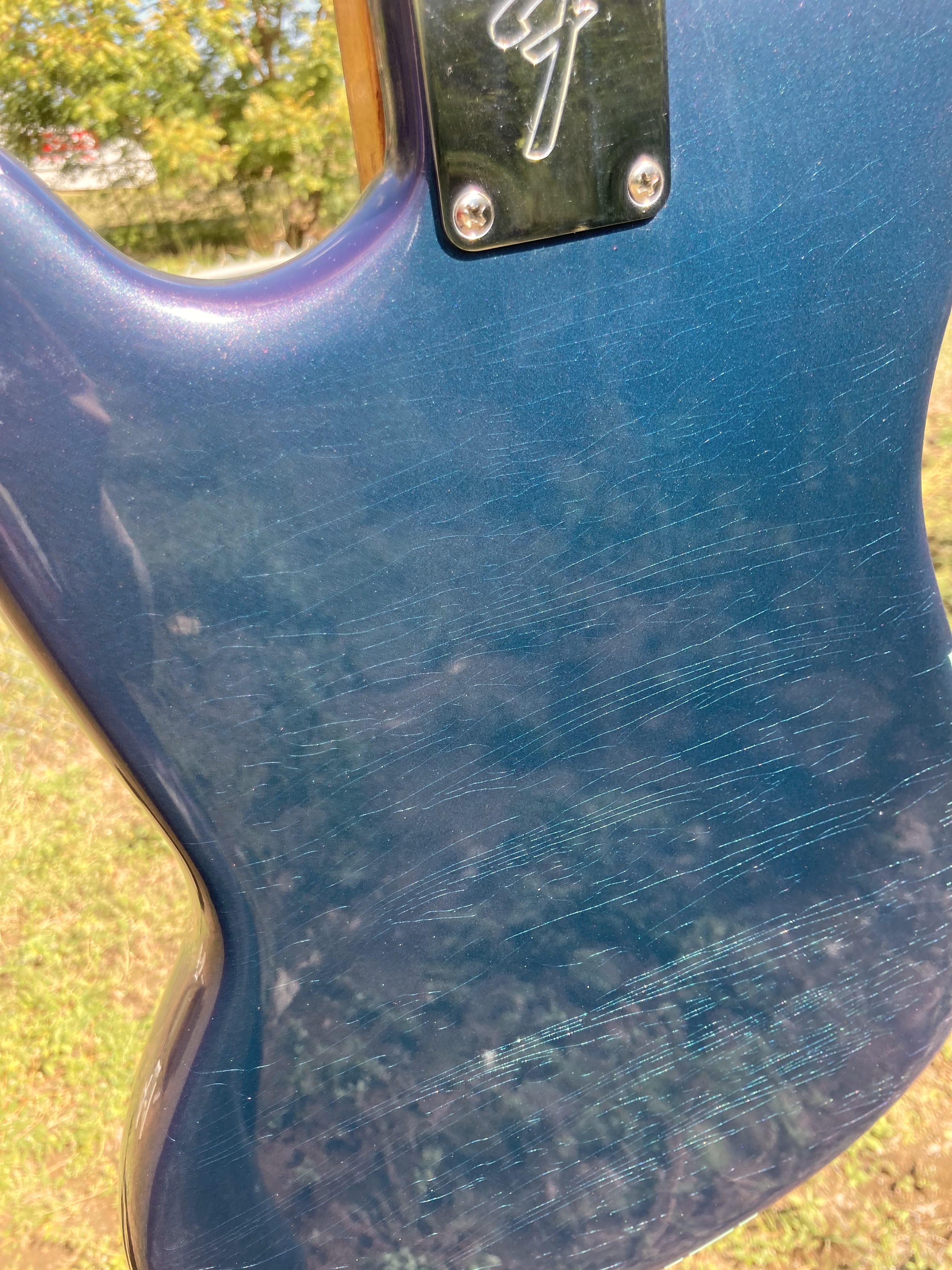 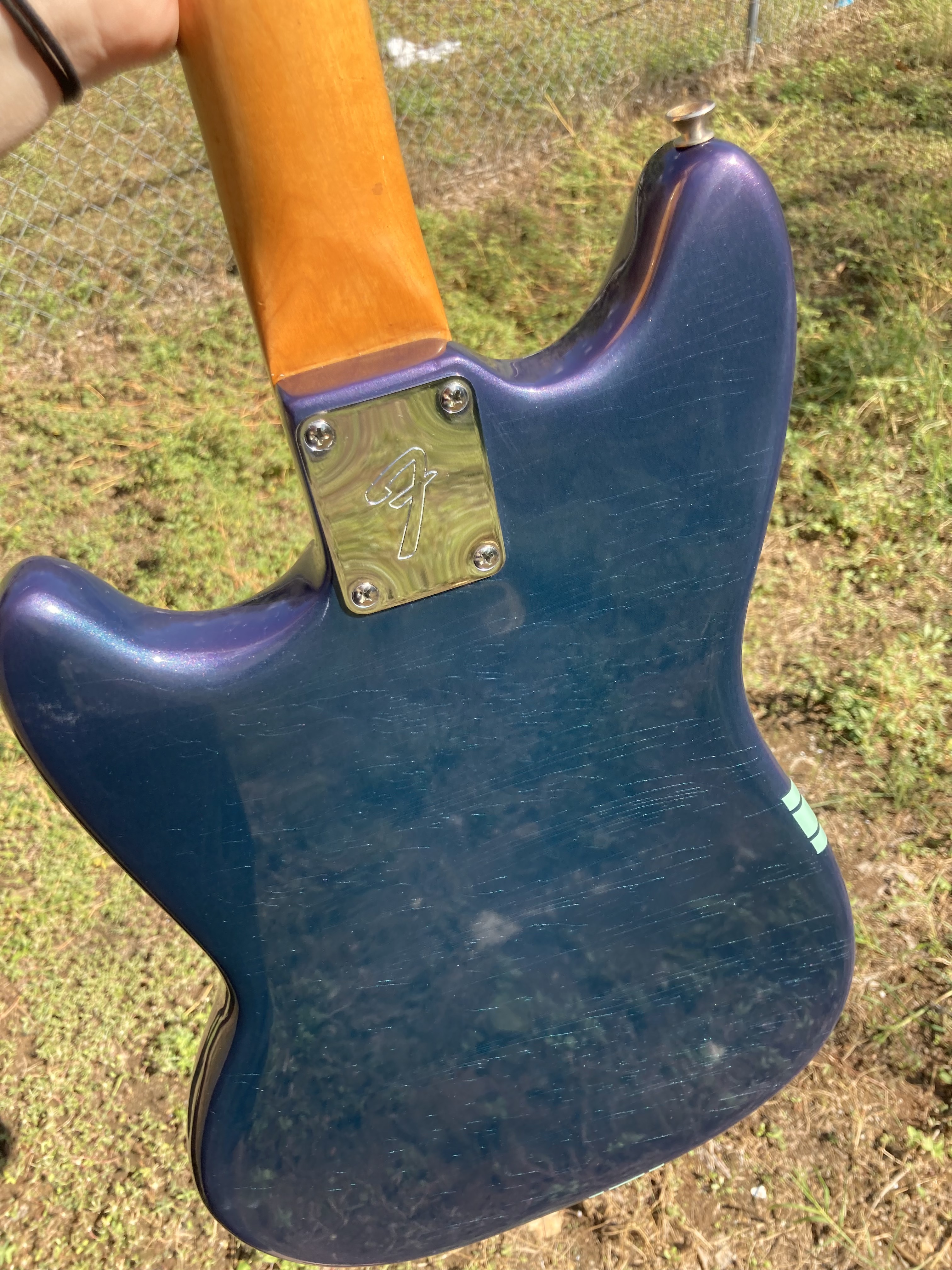 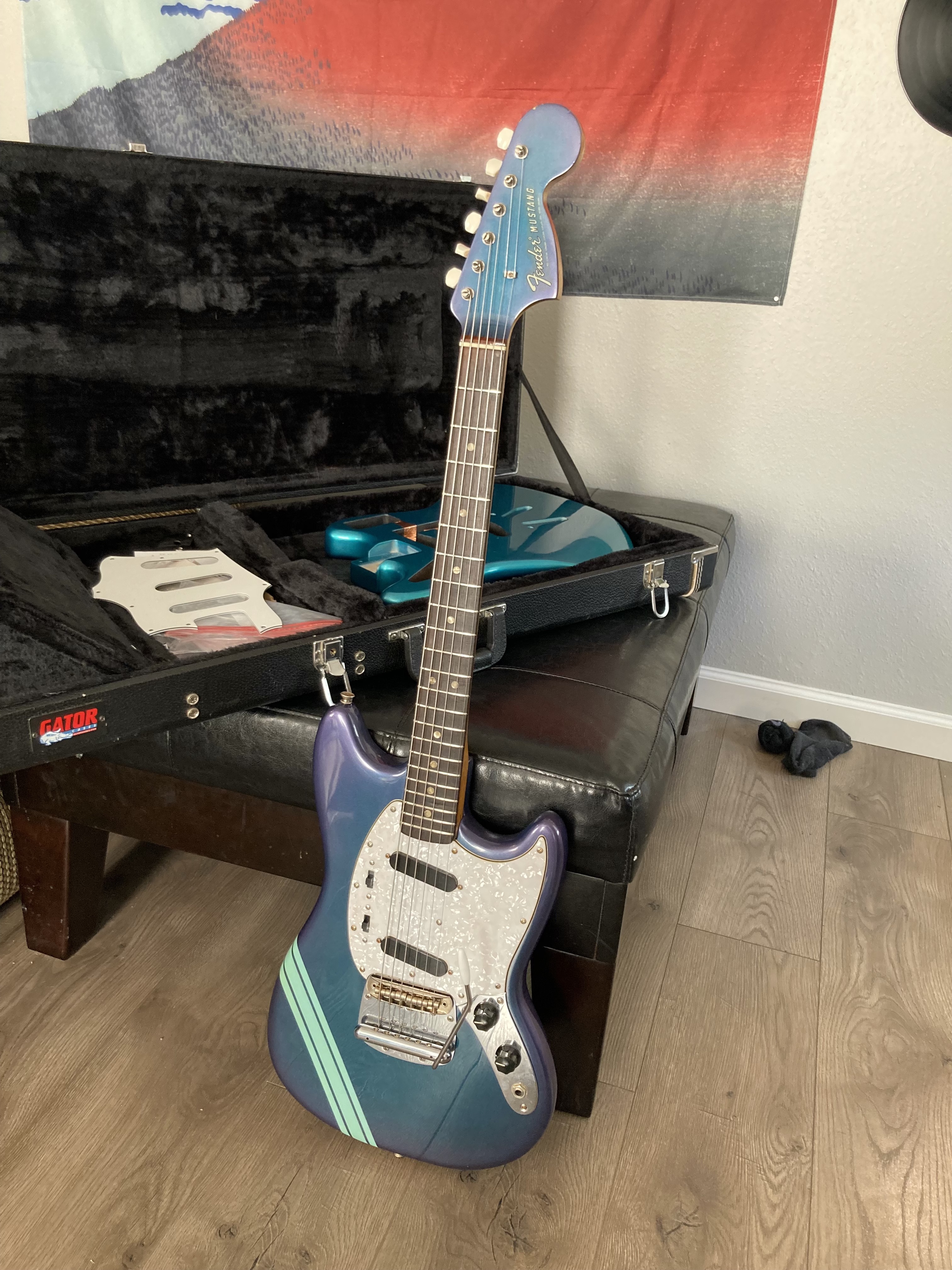 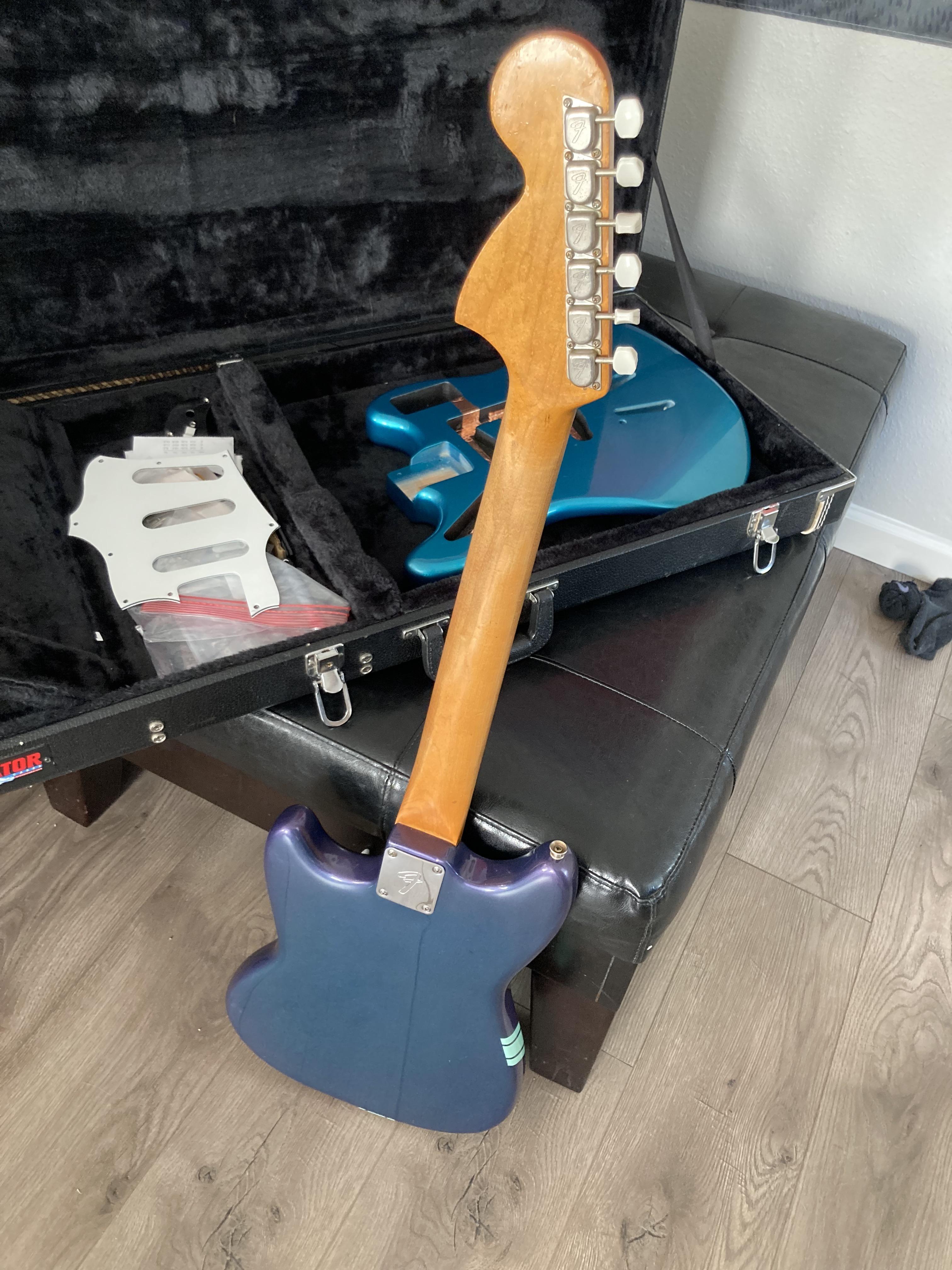 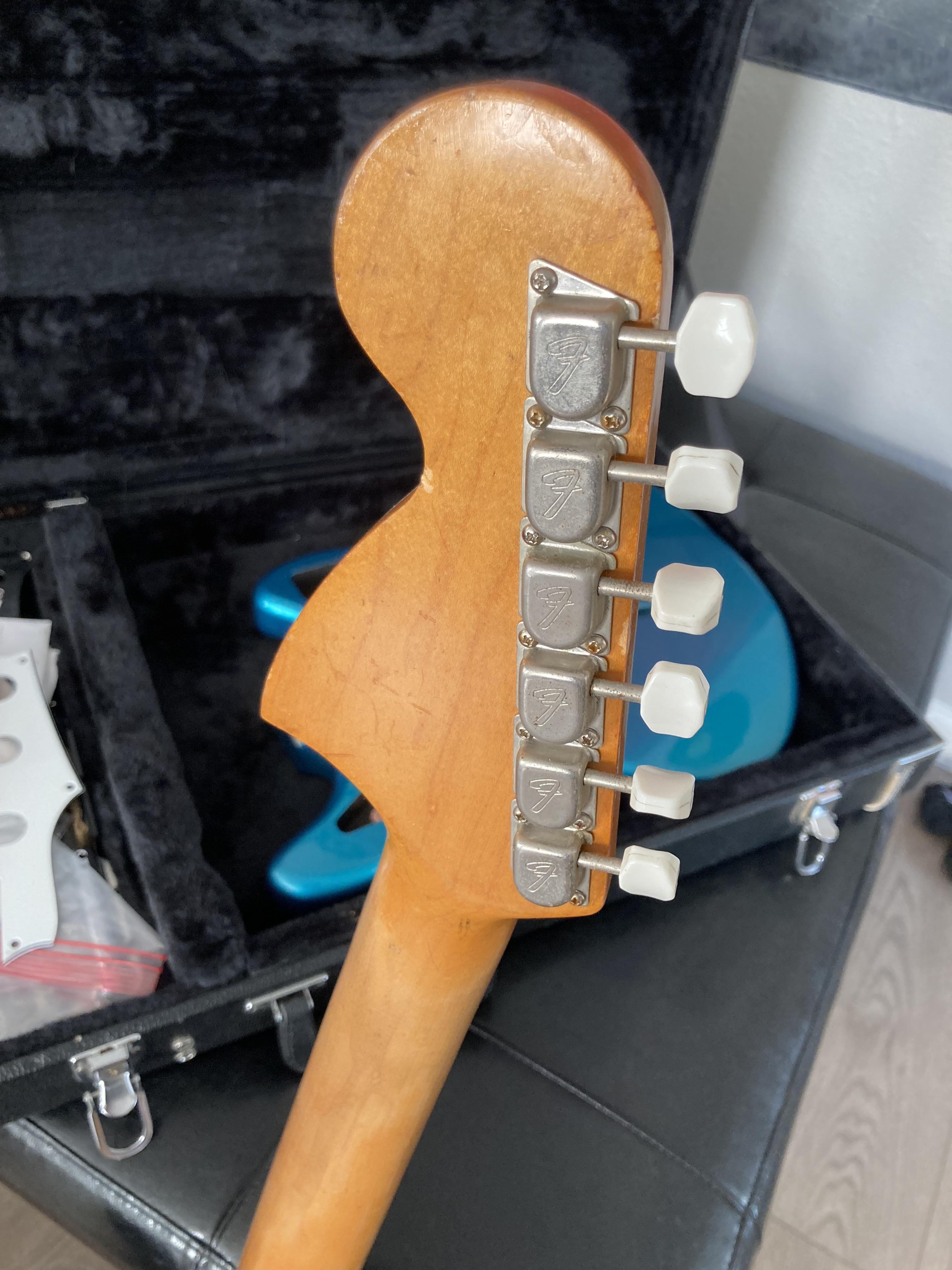 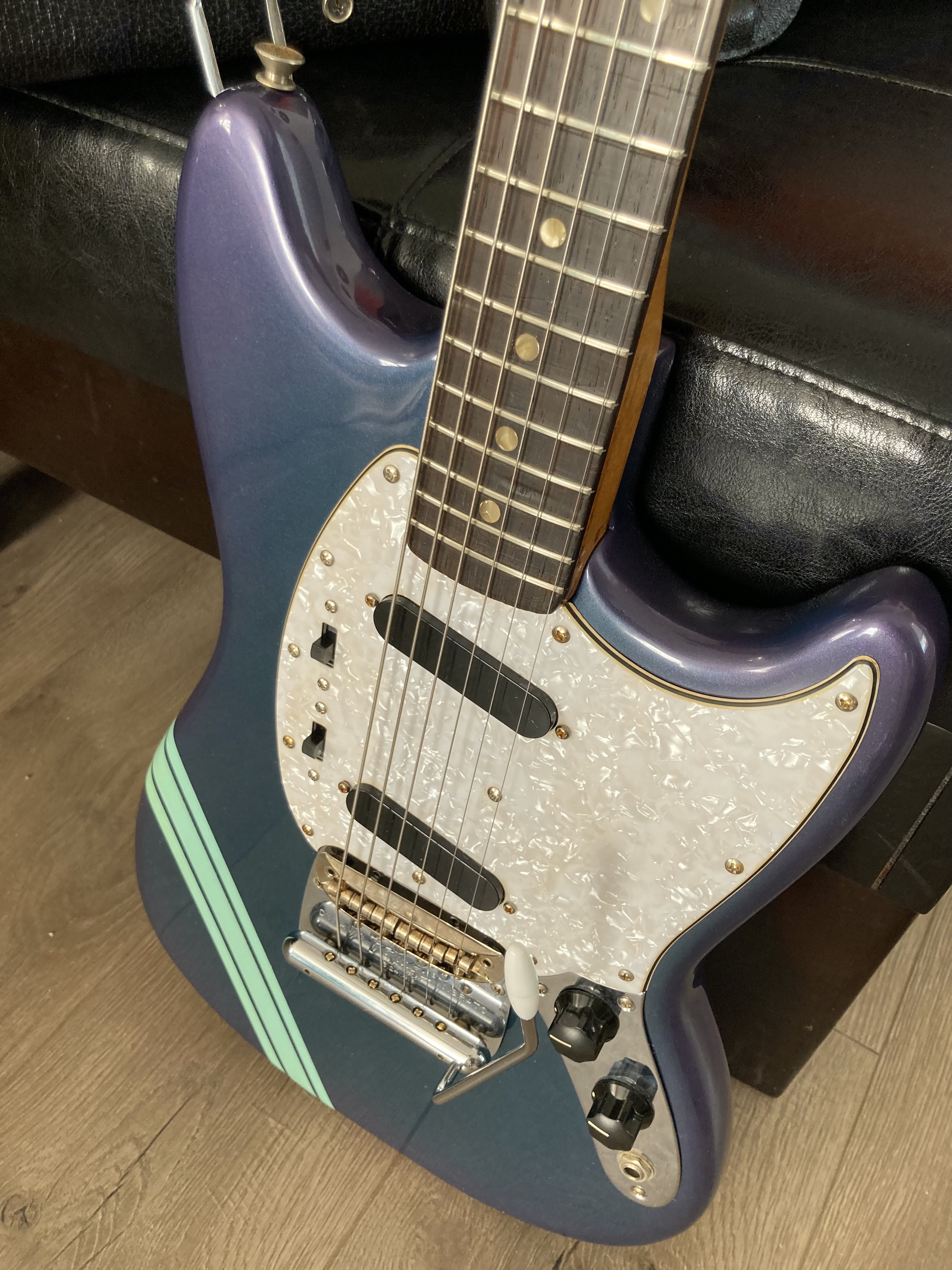 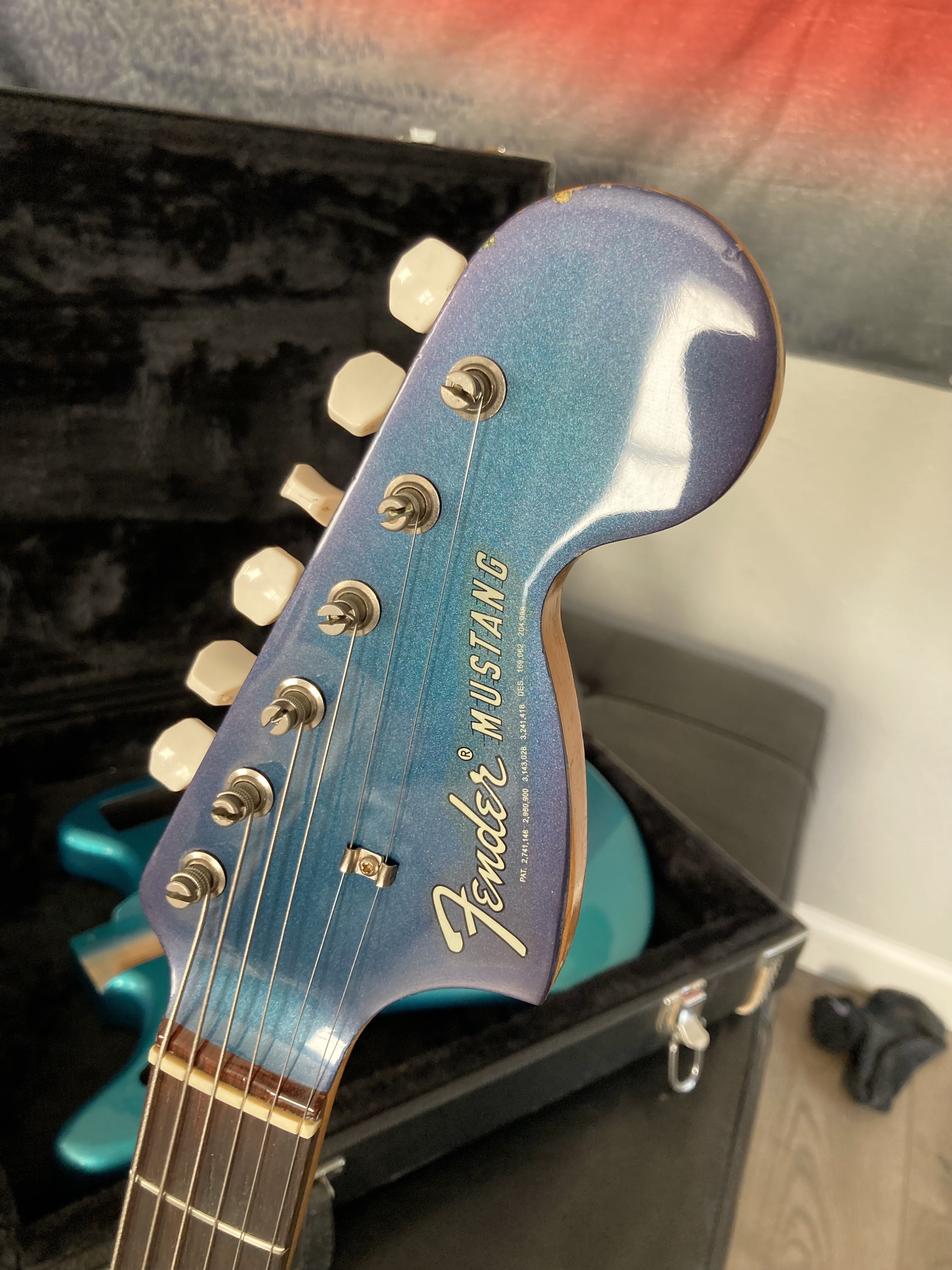 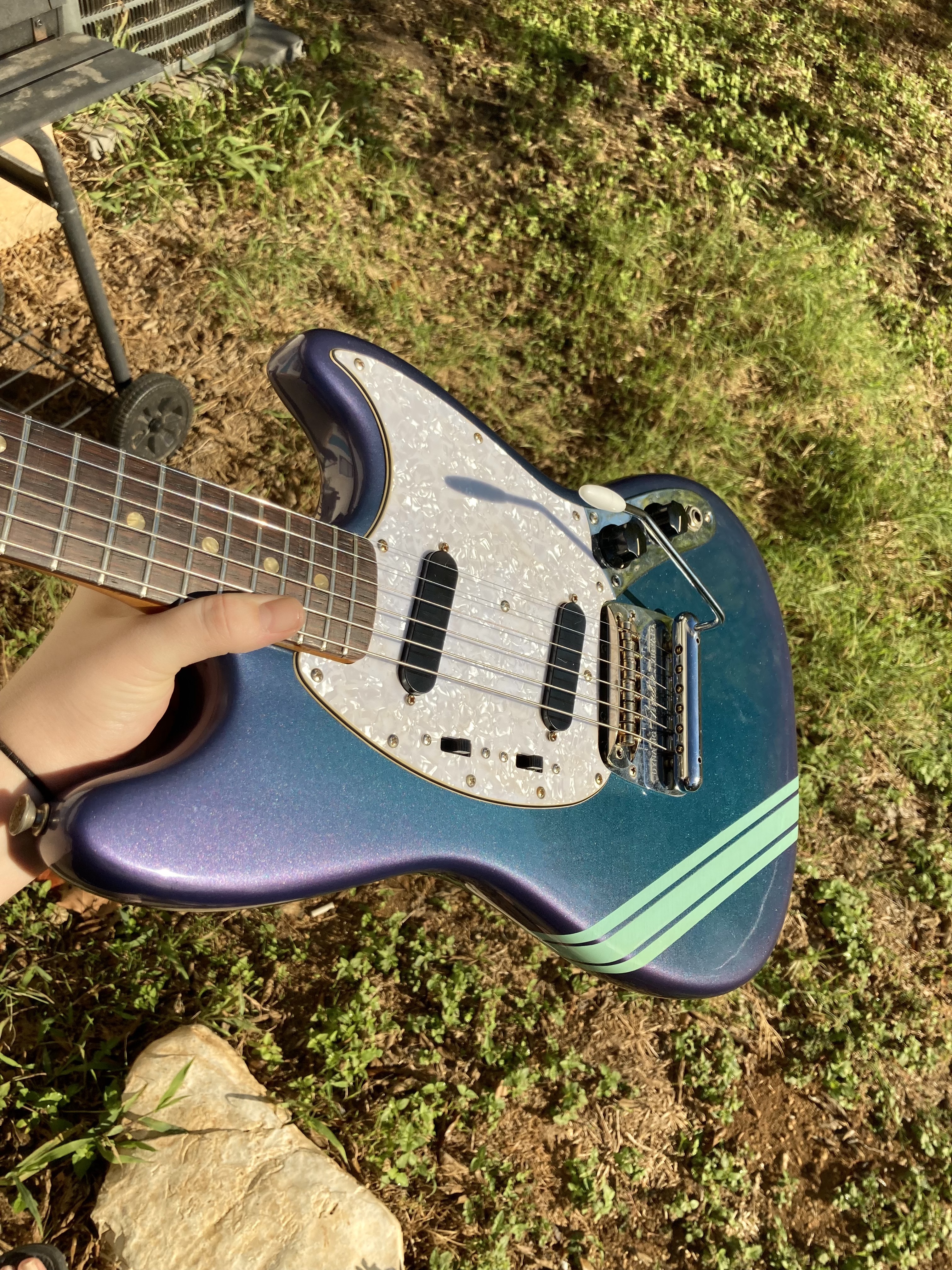 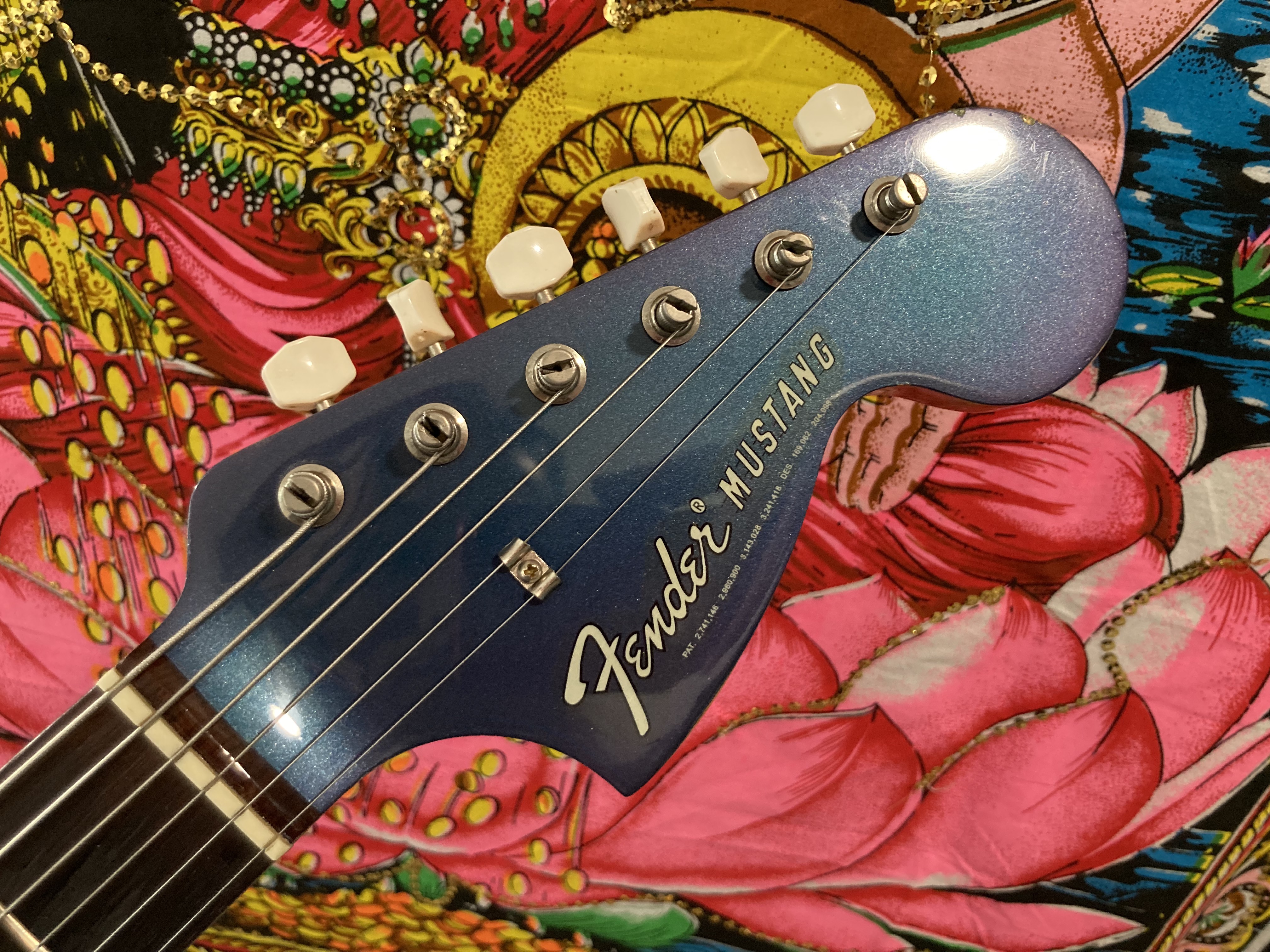 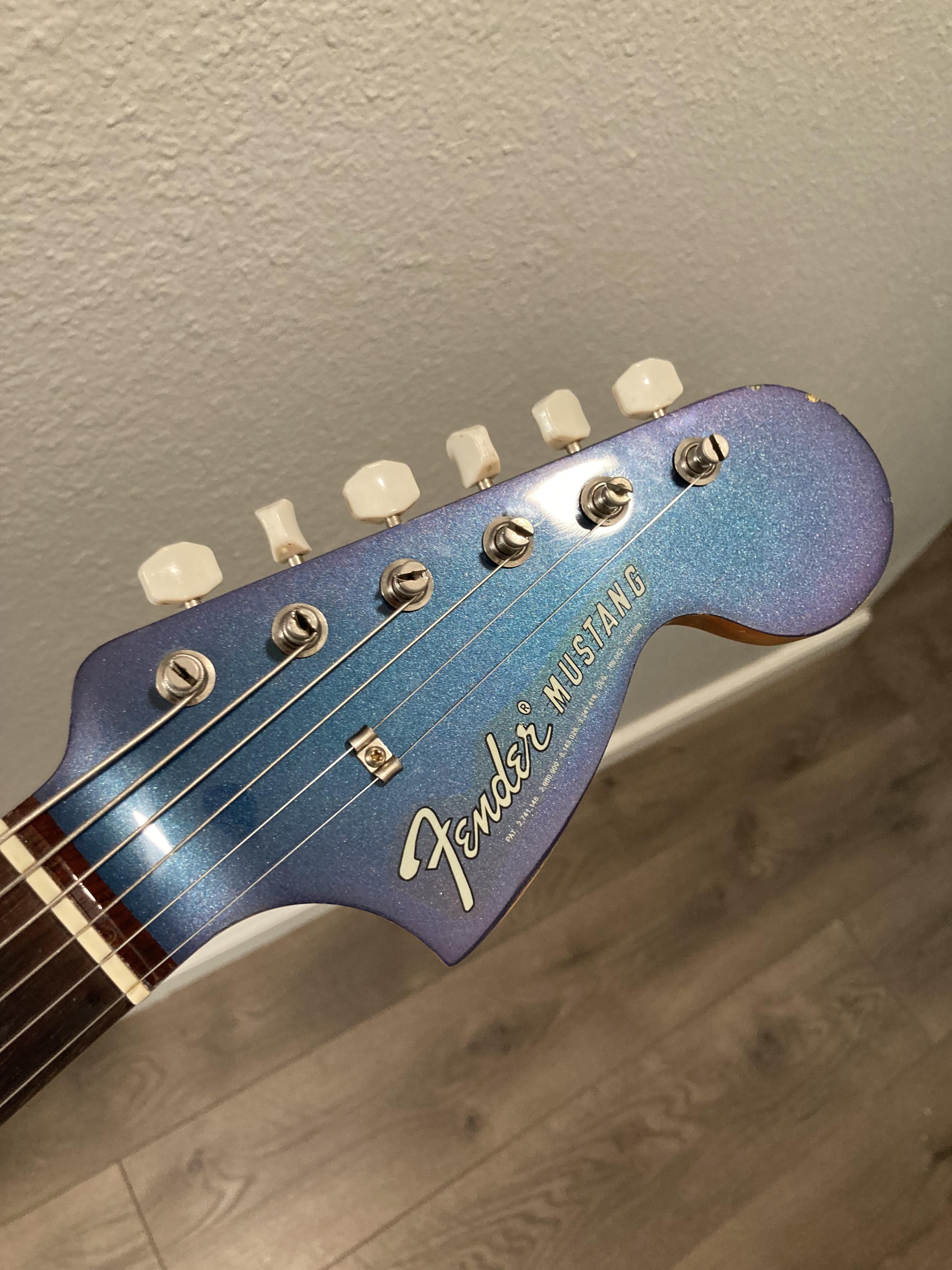 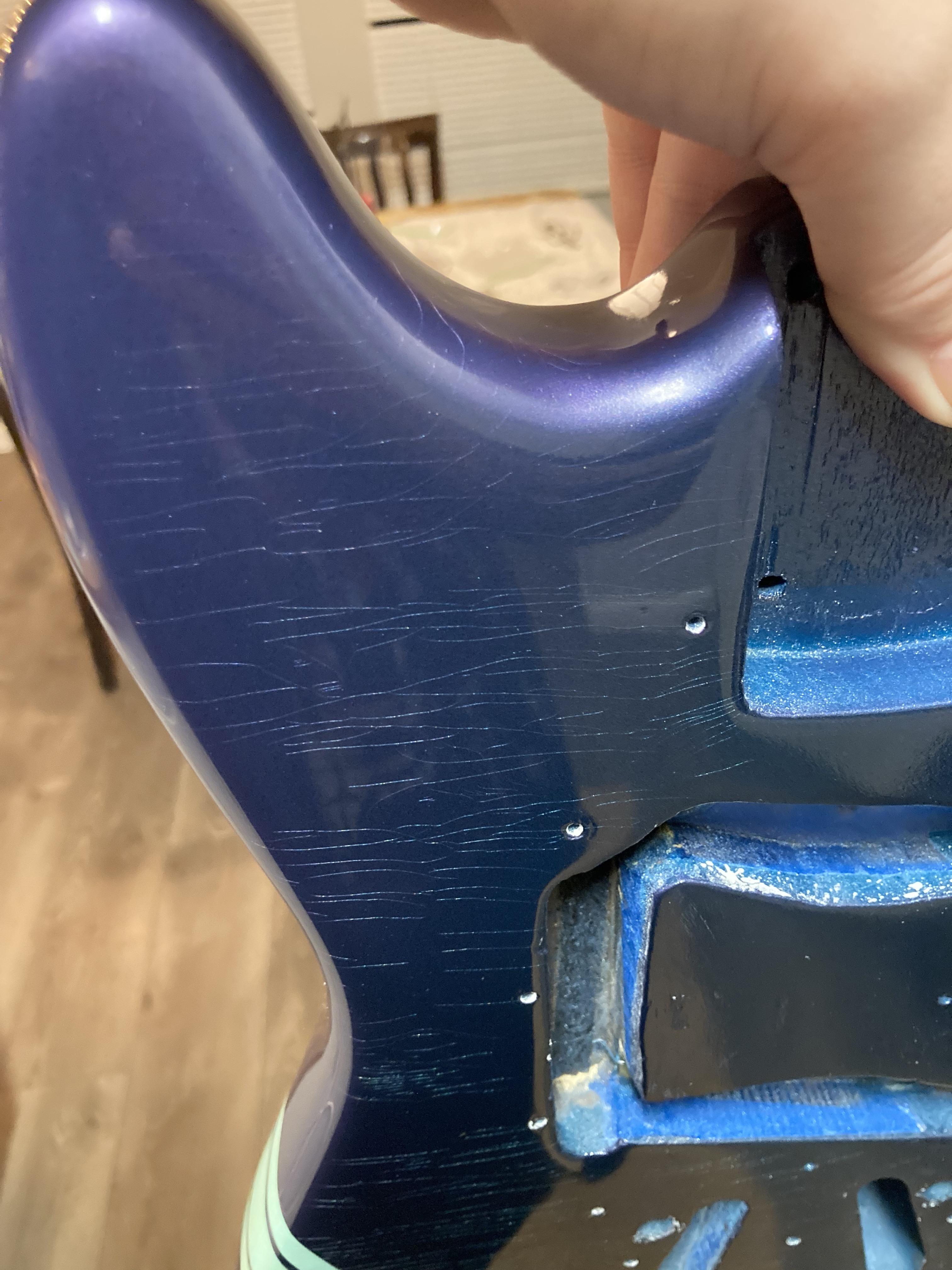 Whoah!! Absolutely beautiful, great job on that! Thanks for sharing!
Top

Can you come to the UK & do my mustang like this please?
"Like the cries of dying galaxies lost in sheer corridors of time and space"
Top