Ok, so I realize I just posted a New Lute Day about my Baroque lute, but I'm too excited about this to wait long enough to appear like a not-crazy person.

What we have here is a 14-course archlute by the same luthiers as my Baroque lute, the Sandis in Turkey. Unlike the mahogany of my last one, the neck and bowl of this are made of maple. It's a bit less flashy, but promises to be even better made. I had been in talks with them about custom building me something called a Lesser French Theorbo, but pandemic-related supply shipment delays meant that will likely have to wait until next year. They offered me this instead - they had two archlutes for sale online already, but told me that they set this one aside because it was better-made and had higher-grade woods. The subtext was that this was likely built by the master luthier without the touch of an apprentice. I was wanting an archlute anyway, so here we are! 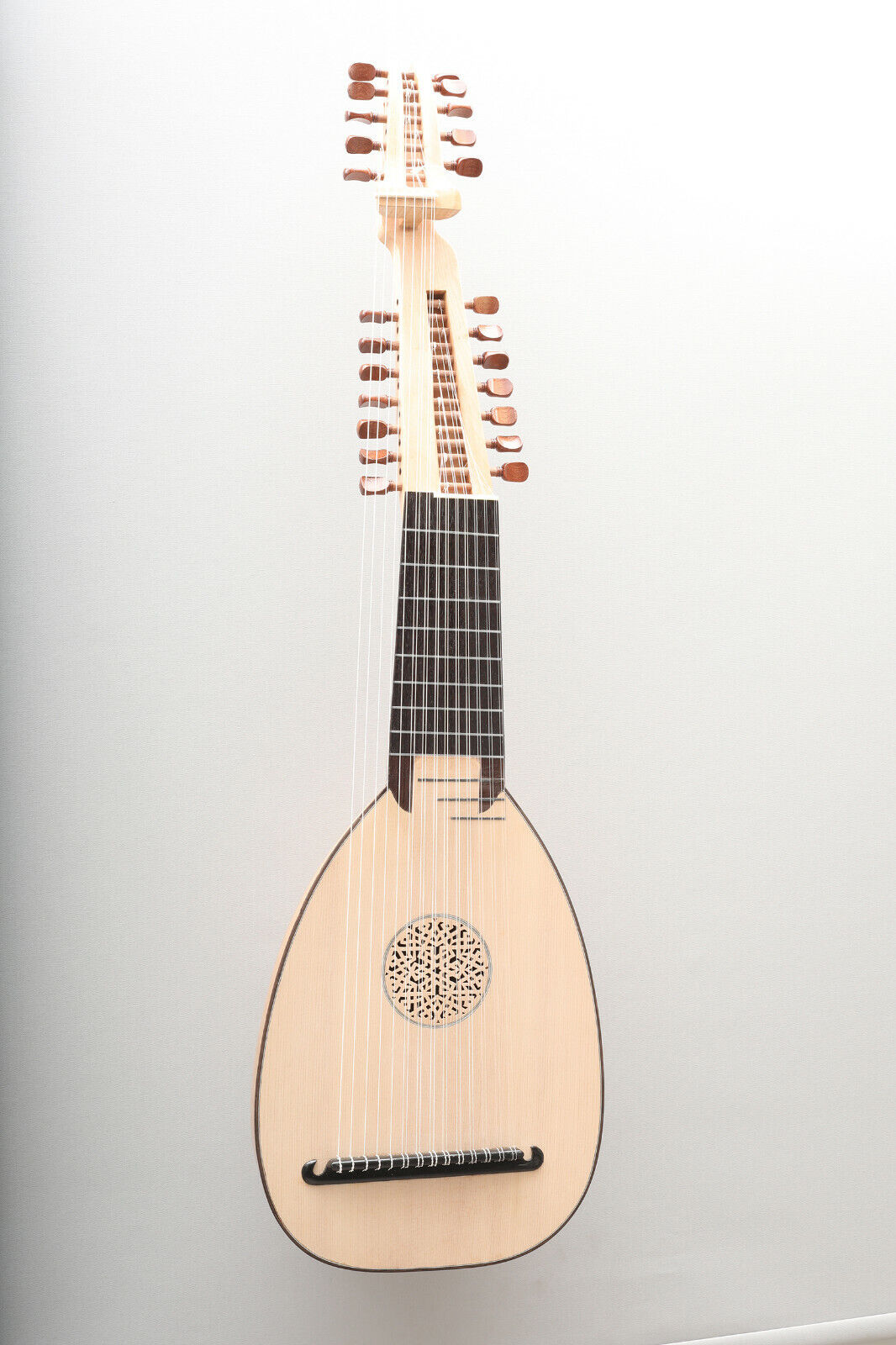 So, what the fuck is an archlute?

In my Baroque lute thread, I mentioned how the Renaissance lute, tuned in fourths other than one third (not unlike a guitar) slowly gained extra low strings over time, from six at the start until it hit ten at the end, with the 11th string being added by the French when they changed the tuning to two octaves of a D minor chord, birthing the "Baroque lute" that then gained two extra low courses in Germany.

But that's not the whole story. Even though we call those 11/13-course D-minor-tuned lutes "Baroque" lutes, the 10-course "Renaissance" lute actually continued on the same evolutionary path in Italy (and England too, but their musical importance was overshadowed by the Italians in the Baroque period so you don't hear as much about them).

The Italians also kept adding strings, just like the Germans, but maintained the vieil ton as the French called it - the "old tone." In other words, Renaissance lute tuning. They also came up with a different solution to the problem of needing longer scale length for the bass strings, also known as diapasons - instead of the German "bass rider", they just stuck a second, longer neck onto the end of a Renaissance lute and birthed "the archlute" as it is now called.

So, really, while those Dm French and German lutes are still known as "Baroque" lutes, the archlute was its contemporary and is every bit as much a "Baroque" lute. You could accurately call it an Italian Baroque lute, except that would be confusing given modern terminology surrounding these instruments, so we'll stick with "archlute."

One of the tricky bits is that archlute sizes vary to an astonishing degree compared to 11c/13c Baroque lutes. This is a small one. There are others that can be as large as theorbos, with diapasons 1.5m in length. This one has fretted strings that are only 57.5cm in length, with diapasons of 83cm, which is over 32". Coincidentally, its lowest string is an F, which, in Baroque tuning of A=415Hz, equals the low E of a modern bass guitar.

Okay, so what does it do differently from a "Baroque" lute?

Well, since an archlute is just a second neck and wider bridge grafted onto a Renaissance lute, these things can be used to play the entirety of the Renaissance lute repertoire. It has enough strings to cover every single piece written across the entire era throughout Europe, so I'll be able to use this to learn the works of John Dowland, my (and many others') favourite Renaissance composer. The larger archlutes are unsuitable for this purpose, because Renaissance tuning necessitates larger stretches on average than on a Baroque lute., so even though the tuning is the same, pieces written on smaller lutes aren't necessarily playable. This "small" archlute has none of those problems - 57.5cm is a perfectly normal scale length for a Renaissance lute, so it's got that covered.

It can also, of course, be used for all of the Italian Baroque repertoire that was written for it, which can't be played on a 13c German instrument due to its tuning. Interestingly, a couple of the Bach lute suites are easily fingered on an archlute and nigh-impossible to play on a German lute, so it seems as though there was some cross-pollination there, as well. He likely encountered archlutes at some point and wrote those suites for them, though some still believe they're all Lautenwerck music.

But, I had one other major motivation for getting an archlute - it can be single-strung. German Baroque lutes all have double courses, but their Italian counterparts were often strung with single courses (though double also existed). With the archlute's relative tuning being so similar to guitar, and it being historically-accurate to single-string it, this instrument gives me a way to break up my practice sessions on the Baroque lute with something that is less of a challenge in terms of both left and right-hand technique.

Plus, a single-strung archlute sounds pretty darn cool. Here is a video introducing the archlute and demonstrating an Italian Baroque piece starting around a minute and a half in. They also sound great playing Renaissance pieces like this Scottish one. Here's a little Bach, and if you want to see how massive these instruments could get, here's a giant double-strung one playing some of its native Italian repertoire.

I'm really looking forward to playing Renaissance and Baroque repertoire on this, and - in theory, at least - I should be able to start accurately playing pieces on it much sooner than the Baroque lute since it's significantly more similar to a classical guitar.
Top
Post Reply
1 post • Page 1 of 1

Return to “Other instruments”