Talk about the Fender Jazzmaster, Jaguar, and any other offset waist guitars with us!
https://offsetguitars.com/forums/

del wrote: ↑
Fri Mar 05, 2021 10:05 am
Any Rat is a good first Rat.
I'll vote for the least expensive one - or the one that looks the coolest.
Vintage Rats are special for collecting because they are old or rare or, more frequently, because they beat up and look super-cool-rough but are still working perfectly. I don't think they sound distinctly different beyond (as the previously posted JHS video demonstrates) tolerances within components that make matching settings a tiny bit tricky.

All the simple mods and turbos and whatnot can be awesome, but they are variants on base Rat-iness, which anyone should try out first. The more dramatic mods are just turning a Rat into a not-a-Rat.

I have two Rats that I love, but am only using them occasionally right now (I'm on a fuzz face kick!). With those, I would often run them both in my pedal chain: one as the first pedal with "distortion" set low (which is delightfully fuzzy on a Rat), and the other as the second-to-last pedal with "distortion" set medium (which is a toothy, churny sound). This follows the model set by, I think, KG in SY and GC in Blur.

I hope this is helpful!
~del

Ha yeah I saw an interview with GC where he said everyone would always tell him he was using the rat "wrong" because it was set to lower gain. When I used to play it back in the stone ages before you could find that kind of stuff out, I actually used it the same way.

by dc
Guitar Pedal X just did a big rundown of the current crop of mini-Rats:


I had a black secret too. Another one with an added buffer afaik (when the pedal is ON). This makes it tighter and more suitable for clearer distortions. But may make the lower gain sounds even icepickier and lack nuance compared to my BYOC (basically vintage rat with clipping options). The rat has very high impedance and dramatically changes when buffered or stacked. 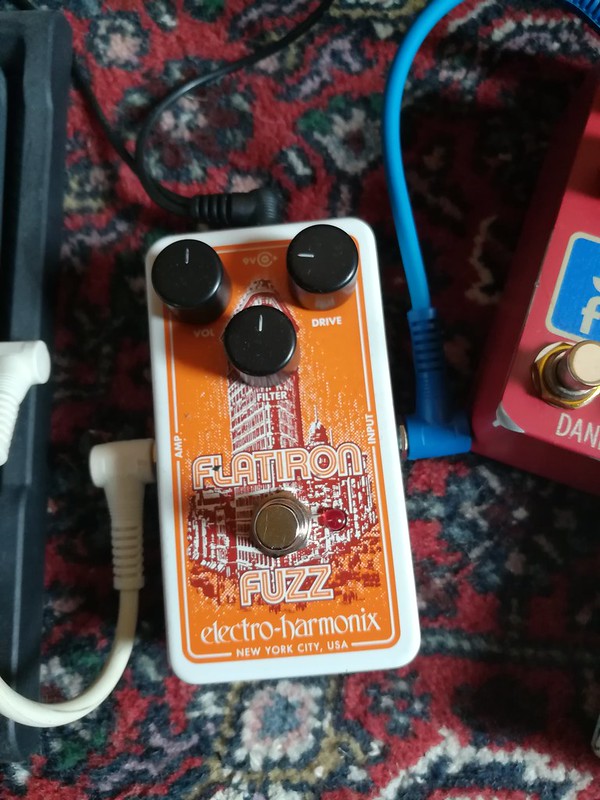 Like mine too. Great pedal. Bought it for recording. Never made a side-by-side comparaison so I dont know how similar it sound to a real RAT.

The guy behind the counter yelled out “Sounds like a RAT!”

Yes, it does. I guess I am not a connoisseur, but a RAT sounds like a RAT. I never wanted another one besides that big box version and still have it. It does what it says on the tin. It sounds like a RAT. I used it as an overdrive to Marshall up my AC-30. Gives it a nice crunch. I almost never dime it because that still sounds too much like a hair metal solo to me and I don’t have a Floyd Rose.

Built by “The Woodchopper” if you are a connoisseur.

You can say that about any kind of pedal, really. "Sounds like a Hall reverb!", "Sounds like a Tubescreamer!", etc. But as is always the case, there are noticeable differences among the many versions and variations. I have two RAT clones on my board (Foxpedal Wrath V2 and Big Ear Woodcutter), and both sound very different. I stack them together because I like the way their harmonics affect each other. I tried to just make do with one of the two, but I ended up missing that complex harmonic distortion you get with the two stacked, and I also like the way each sounds on its own.

Proco RATs from different years also sound different. And a Turbo RAT sounds quite different from a standard RAT. And so on, and so forth.

sunburster wrote: ↑
Wed Apr 07, 2021 8:28 pm
Proco RATs from different years also sound different. And a Turbo RAT sounds quite different from a standard RAT. And so on, and so forth.

Rats are like the pizza of pedals I think even more than Tube Screamers and Muffs. You can have the artisanal brick oven version, delivery from twenty different places, the 'authentic' Italian ones, drunk giant slices, regional variations (NY, Chicago, etc.) frozen, pre-made, homemade, and probably some others. Generally most people will identify the variations under the basic definition of 'pizza' and then we can all argue about which is better and why, while others (the filthy casuals) won't really care either way as long as it's cheap.