Talk about the Fender Jazzmaster, Jaguar, and any other offset waist guitars with us!
https://offsetguitars.com/forums/

by MrShake
I've really been digging this live set by the Jon Spencer Blues Explosion lately. Judah Bauer is playing a Tele and a Twin, I think, but that big wooly Fuzz Facey bark is Spencer's guitar is a straight into a Kustom 200.
https://youtu.be/w0i1ckEYUA8

Gang Of Four's Entertainment!, as mentioned above, is a Carlsboro, right? Here's "Damaged Goods".
https://youtu.be/bhYP_aPvZTE

Daniel Ash from Bauhaus is H/H, right? Some of his more processed Love And Rockets stuff doesn't do it for me, but that first Bauhaus album rules.

Didn't The Cure use Peavey Mark or Musician heads for the Bass VI stuff as well? Try "Primary" or maybe the Concert album.

There's a specific flavor and clarity to the attack, a quickness. I go to these kinds of amps when tube amps have too soft and mushy an attack, even the Kustom has a bite under the maxed output.

by Pacafeliz
...what, did someone say HH here?! 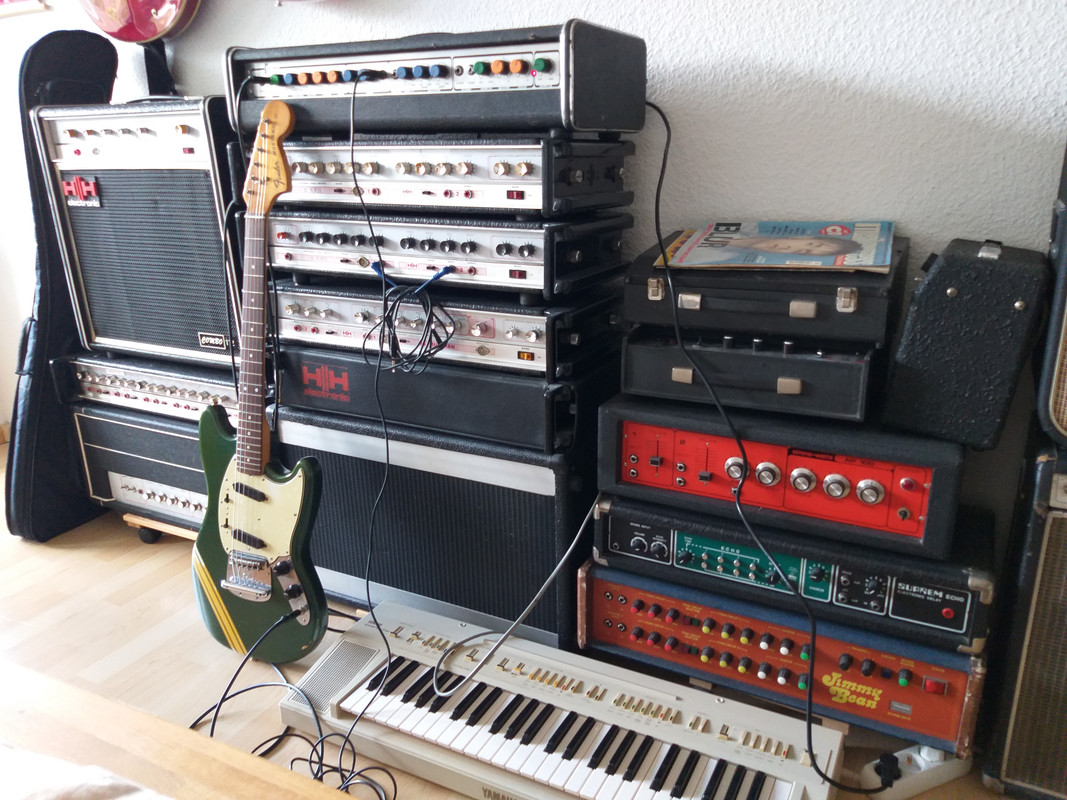 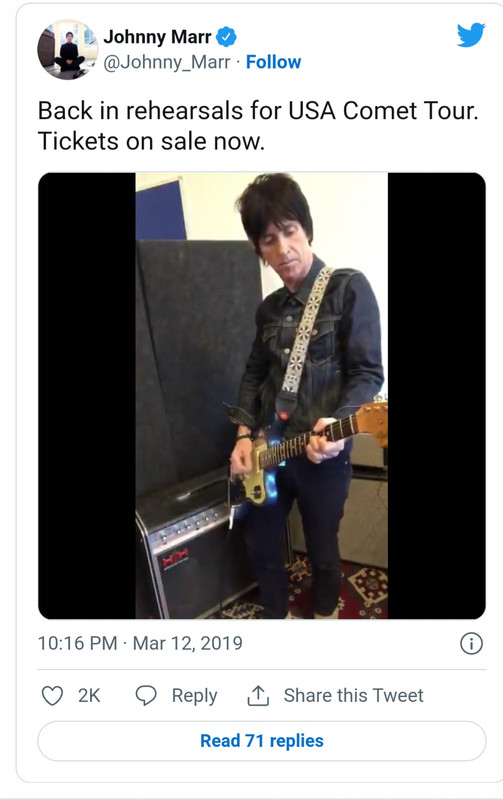 Here's another guy who likes 'em...

That's gorgeous. All the glowing alien light that must put out!

I've loved your posts for years. You're a gentleman of taste and refinement. The solid state equivalent of that "rich leather and mahogany" line.

You've got me wondering. Like others here in the US, stuff like H/H and Carlsbro have an exotic appeal, due to cool sound and relative rarity over here. We're spoiled in the States, I realize, but does, uh, "distinctive" American gear have cache the other way? Is a '70s Peavey or Kustom or something like that more desirable in, say, the UK or Europe or South America than they're seen in the US?

Are our "doorstops" as interesting elsewhere as elsewhere's are to us?

by MrShake
This thread needs more pics. With offsets. 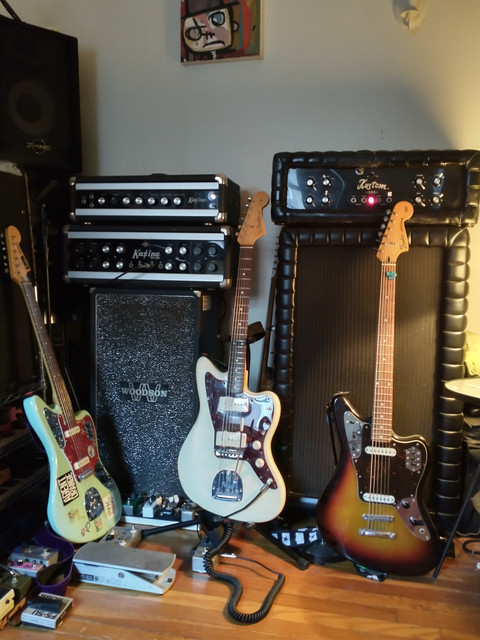 MrShake wrote: ↑
Sun Jul 31, 2022 5:47 am
You've got me wondering. Like others here in the US, stuff like H/H and Carlsbro have an exotic appeal, due to cool sound and relative rarity over here. We're spoiled in the States, I realize, but does, uh, "distinctive" American gear have cache the other way? Is a '70s Peavey or Kustom or something like that more desirable in, say, the UK or Europe or South America than they're seen in the US?

I think the cachet that old solid state amps carry is about the same, regardless of where you are. A big part of their initial appeal is how cheaply they can be picked up, but once you have one in your life you come to understand why they were the professionals' choice through a large slice of the '70s and '80s, before the valve amp revival came around and they fell out of favour with keen amateurs and pros alike.

Peaveys have always been fairly plentiful in the UK, so there's not much mystique there; Kustoms are nowhere near as ubiquitous. I don't know that there are many people in the UK gassing for US solid state amps yet, though - we're kind of spoiled for choice with all the British-made ones floating about, and that's before you even start looking at Japanese ones, of which there seem to be almost as many.

One thing that perplexes me is how quick many players are to rubbish the distortion on solid state amps. I mean that Carlsboro Suzz (probably with parametric high end boost) sounds absolutely lethal on this Gang of Four tune; you have to wonder what a valve amp could do that would make it sound better....unless you were to employ some pedals in front of it. Pedals that are full of transistors, that is.

by MrShake
Thanks for the thoughtful response, my wife and I read and discussed it over our morning coffee!

I do agree. While they AREN'T tube amps, and shouldn't be apples-to-apples, these early "high profile" ones do make so much sense in the context of their time. They do have strengths somewhat unique to themselves, and have a lot to offer if "classic tube tone" isn't your only directive. And cool to know about the UK market - I'd be hard pressed to hunt a Kasino if there were abundant, cheap H/H and Carlsboro amps.

That distortion point is also astute. And you have good taste. My Peavey's preamp can do live Elvis Costello with that stinging sound, and get cranked to an Isley Brothers "Who's That Lady" fuzz, and the Kustom does a full-throated germanium transistor fuzz sound like my oft-linked favorite JSBX clip - something I can't imagine a cranked tube amp doing without the assistance of (as you astutely put it) some transistors.

[Edit: not all solid states are created equal. Don't anyone confuse the sounds I/we are talking about with the sound that came out of your Crate GX-10 back in the '90s, just because it also has "transistor distortion".]

I love a cranked tube amp. It's just that there are other good guitar sounds. Like that Gang Of Four clip.

And I'm so glad I got to see Buzzcocks while I still could. They sounded fantastic.

by marqueemoon
That Gang Of Four clip was awesome.

A Polytone amp has been on my “maybe someday” list for a while. Maybe if I ever get to retire I’ll learn to play guitar properly and become a jazzer.

by Sweetfinger
Regarding the fuzz and overdriven tones of SS amps- by the 80s, solid state amps were either for country players/pedal steel players who wanted clean tones, or for jazzers, who wanted a different sort of clean tone and features. Never overdriven, and fuzz type tones were only used by "throwback" types, looking to re-create the "60s". Fuzz and solid state was largely seen as an earlier, failed, and out of date attempt to approximate tube amp tones.
In the 90s you have a whole new generation of players who don't have the negative viewpoint of the previous, and they begin to discover fuzzes, particularly Fuzz Faces and Big Muffs. This is when you see the explosion of new effect pedals and reissues of older designs, and music that uses them, divorced from some notion that the pedal or amp is a poor facsimile of tube gear.
That generation has now given way to the more recent one who grew up listening to the previous, who view fuzzes, overdriven SS tones, bit crushers, and whatever else you have, as valuable and viable tone choices and now seek out the fuzzed out mangled tones in the same way the previous ones sought great tube amps. The players coming into prominence in the last 15 years or so don't even care if any of their gear is tube. If they need tubes, they have them, but it's about whatever delivers the sounds and at this point, a lot of the sounds are from complex digital processors and types of effects unimagined through the 1980s.
I do think old-school solid state amps have yet to experience a renaissance, as the older generations still harbor some resentment, and the newer players are more likely to be using modern solid state amps and modelers. The vintage discrete component amps from the mid 70s and before just fell through the cracks.
Keep in mind that I'm speaking very generally. There have always been players who disregarded gear "fashion" and used whatever suited them, but it is telling that from the early to mid 80s, through a lot of the 1990s, you couldn't find a fuzz pedal from most of the major effects manufacturers. You had the Dunlop Jimi Hendrix fuzz, IF you could find it. Nothing from DOD, Ibanez, Boss, Electro-Harmonix, MXR, or Morley.
That time period sets the table for the appearance of boutique builders in the 1990s and 2000s like Z Vex, Fulltone, Way Huge, etc.

by MrShake
Those are really good points, thanks for sharing!

Yeah, I'd kinda forgotten about what the '90s we're like in that regard. I started buying gear in about '94, after studying Musician's Friend catalogs, and had sort of forgotten that "Fuzz" was a weird throwback for a while. My DS-1 made my clean amp sound better, was all I knew, but the Boss FZ-x and the potatobug Ibanez WERE sorta '60s throwbacks, even then. Distortion and overdrive were the order of the day. I remember Sovtek Muffs and Fuzz Face reissues, but a ton of "distortion" pedals. So yeah, other than the "20 year rule" (where gear's just "old", not "vintage"), I imagine people avoiding these probably lines up with that "fuzziness is for hippie fogeys" outlook of that era, given the fact that these overdrive not to tube raggedness, but transistor tearing.

So I think you're right, they fell between the cracks. Not "classic" enough for orthodox players, not wild or feature-packed enough for players just grabbing sounds. I was in that punk/postpunk arena of just grabbing whatever and making whatever music I could, so cheap, vibey old gear worked for me, but I get the niche appeal... til one plays one of these old solid state beasts, lol, and "cheap, loud, distinctive, and reliable" becomes clear.

I'm envious of this current gen. I have my old-school holdover biases being from that era, and I love relics from this early frontier of technology, but what I wouldn't have given for a Katana when I was 15.

by repoman
My dad has been buying and repairing 60s/70s Kalamazoo amps as something to tinker with. He started with the Reverb model which is a 12 watt EL84 amp, but then decided to try and collect all of the models in the range (he hasn't found any of the Bass models (tube "30", tube "50", SS "Bass"), I think there are 7 of them, 3 of which are solid state- the model 3, 4 and Bass. The little Model 3 and 4 really surprised me with how nice they sound. They don't really OD when cranked by the clean sound is just really nice sounding, with some reverb on it I think it would easily pass for some little tube amp running clean.


The SS amps I'd really love to own are an HH IC100 and some of the Vox models like Viscount, Defiant, Conqueror, Berkeley, etc.
I think the Kustom Amps are really cool too.

I'd forgotten all about those Vox solid states!

I love an AC30 as much as the next guy, but can't ultimately make one work for me, guess I'm too "American" in my preferred sounds, despite my love of the UK postpunk tones.

But that fondness for vintage transistor sounds means I've always wanted to try a Thomas Organ or even a much rarer UK Vox SS.

I'd never considered until *right now* that when I was a little kid, my favorite guitar stuff on the Beatles' records was the stuff that I'd now guess was their SS Voxes, maybe with my newly-beloved Distortion Booster-esque fuzz circuit. The solos on Taxman and Sgt Pepper, the chanky rhythm on Getting Better -- i.e. their "this is an electric guitar!" use of that sound as an effect.

I'm no Beatlemaniac, more of a Stones guy, but I guess those textures stuck with me. A little reverb to soften the edge a bit and make it more of that US surf/garage sound, and I'm in heaven.

Those Kalamazoos sound really cool, thanks for weighing in. I know virtually nothing of the history of them or Polytone, but this dark, dusty hallway of the amp museum is fun to explore, so I've got some reading to do.
All times are UTC-08:00
Page 2 of 2
Powered by phpBB® Forum Software © phpBB Limited
https://www.phpbb.com/