Could this hideous thing be just the ticket?

Appears to be an early 160 converted to a 2x10 in pretty beaten up shape. But if it works, it could actually be perfect for what I'm after.

Dude was asking €125 in a different ad and has posted it 3 times. I wonder if he would ship it. I wonder how easily I could find a couple replacement knobs, and if the grille would clean up? Craziness...

Okay, I so I went and checked out that local JC-120 this evening and instantly fell in love, so of course I bought it: 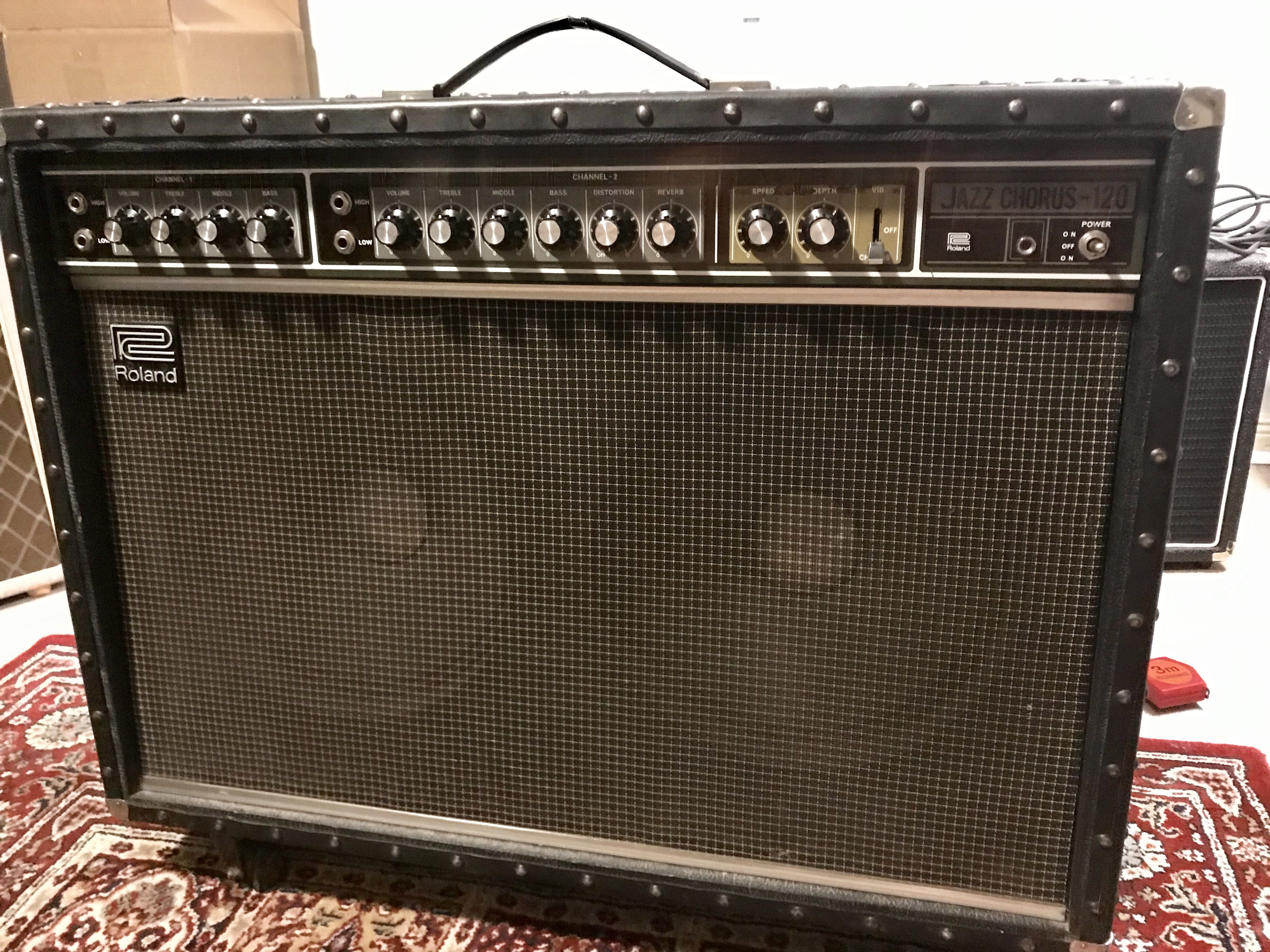 Pardon the crappy pic. Pretty early model...good condition. Serial number indicates October of 1976. Pretty good shape and sounds fantastic! Dude said he has owned multiple JC-120s in the past and this one was the best sounding. A knob has been added to the back to control the chorus depth (dude was amazed I figured out what it was right away). I wanted to say one of the line out jacks had obviously been replaced, but I just realised that an additional jack has actually been added, so I'll have to figure out what that is.

I really do think there is something to the older ones (pre '80) sounding better. I also did some research and found out that it's only these amps that essentially have a built-in CE-1 circuit. After that, the chip changed and it's more like a CE-2. I was worried it would be too loud, I was concerned about getting something with 12"s instead of 10"s, but as soon as I played through it I was hooked.

Have only played it a few minutes at home and it seems like maybe it sounds a little less glorious, hiss seems more noticeable, etc. But it's late, and I'm also convinced the tiny little room I play in in my basement is about as terrible sounding as they come. Oh well...

So, I kinda fell off the edge this morning, and some interesting stuff turned up. Not sure anybody else but me really cares, but here are a few things I found (edit: pictures not working...will have to use links instead):

First of all, here is a picture of Robert in 1980, supposedly from the UK. with what is pretty clearly a JC-120 in the background (very hard to tell, but it looks like a "newer" model with the white writing):
http://picturesofyou.us/photos/80-82/80 ... stripe.htm

And, another picture of Robert from 1980, this time from Australia, with a more recent JC-120 in the background:
http://picturesofyou.us/photos/80-82/p- ... robert.htm

It's easy to imagine that the Australian show was rented equipment...the drums are also pretty obviously not Lol's. But the others, I don't know. Maybe they were running keyboards into one or the other? The JC-160 was seen onstage at least as late as 1984, while I believe the transition to Peavey started in 1981. I've often wondered if maybe Porl was playing through the 160 in the later days, and/or maybe running keyboards through it. (I've also started to wonder if a lot of the gear belonged to Robert or the band, as there is a lot of continuity between different players playing the same gear...the black/white/maple MusicMan stingray comes to mind.)

Anyway, back down the wormhole...

Not much to add..both photos with the JC120 are from the Aus/NZ tour, where they played on hired backline. The single speaker Roland is probably Simons Roland bass amp or possibly the keyboard player's amp.
Top

A little off topic. But I chased Cure tone for a bit. I had a newer 2017 JC-120 and can definitely say that it did not nail the tone or the chorus. The 80s 120s I played were much snappier and more accurate.
Top

Congratulations on that sweet early 120!! I've also chased the JC tone for some years and it's been a really fun quest. I think they are not so trendy now, so It's a good time to snag some deals.

For years I used 120's for live shows, always requesting them on the backline (they are easy to find/rent/lend, always). Amazing at any volume, easy to mix on live situations (specially on bands with multiple guitars), reliable and sturdy, the perfect gigging amp. Famous and beloved but somewhat underrated.

Over time I discovered the JC sound actually translates great to other versions, each one with their own quirks, pros and cons. 55' and 77's seem to be the way and they're almost always cheap, but they're getting hard to find. I eventually settled down on an old battered 50 (w/ the bright switch) that can do some dark, Marc Ribot kind of sounds. I just love that amp. Put a good ol' Jazzmaster (like Robert Smith) on the front and you're pretty much reaching the end of the rainbow

The only JC's I don't like are the modern versions. Different feel and sound overall, and at least most I've played are really boxy

Anyone use a Peavey Stereo Chorus on a budget? It is basically a clone of sorts, and appears there is a 410 version like the jc160 and a few different cab configurations.
Top

Just curious since one finally came up (glad I didn’t wait!) and appears to be in very good condition. I’m assuming it won’t sound as glorious as it’s older brother, but are they much quieter? That would be nice...my JC-120 is a beast and I can barely crank it to the point where the chorus kicks in.

I’m assuming this would be “in addition to” and not “instead of” and I hope the answer is “no!”

And you should also buy a JC-160 to complete the set.

"I don't know why we asked him to join the band 'cause the rest of us don't like country music all that much; we just like Graham Lee."
David McComb, 1987.
Top

jorri wrote: ↑
Sat Feb 27, 2021 5:16 am
Anyone use a Peavey Stereo Chorus on a budget? It is basically a clone of sorts, and appears there is a 410 version like the jc160 and a few different cab configurations.

The late 80s/90s peavey stereo chorus amps are pretty great and versatile (our old guitarist used a 212 one exclusively, and in a bit of serendipity so did his predecessor!) There are supposedly some differences in sound by era/version but all sounded good to me from across the rehearsal space.
Top
Post Reply
40 posts