I have a Fender Jaguar HH that I got this year. I wanted a KC Jag but I couldn't put down that money on a model that I have never owned. I really love Telecasters and have been playing them pretty much this entire decade. So I'm wondering if I could do anything to improve the model I have. Mine is basically a Blacktop Jaguar with special Daphne Blue finish like I saw in a video of a Fender artist that painted his KC Jag that color. I feel like this guitar would be a good platform for mods but I also feel like it may be good as is. I use the middle position mostly for clean than the bridge when I'm using a dirty sound. I'm on the fence because I like the guitar but I'm wondering if I would be happier with a new 70s Telecaster custom. I could sell my 72 Deluxe and Jaguar HH and get the Vintera Tele and probably have some money left over.

I'm going to try some new strings on her. Any Blacktop Jag users here? I'm curious to hear some stories about your guitars!
Top

That’s the Mexico/hardtail? Not a guitar to be ashamed of, esp. the color. Is there something you want it to do it’s not doing? Do you just want a bridge single coil?
King Buzzo: I love when people come up to me and say “Your guitar sound was better on Stoner Witch, when you used a Les Paul. “...I used a Fender Mustang reissue on that, dumbass!
Top

It's a hardtail and sounds OK stock. I have been using 9s and recently ordered Elixir 10s so I'm excited for a change. It doesn't have the trem like the KC model or the Super Distortion which I would of preffered. I think the major downfall is the neck pickup just doesn't sound that great and I never use by itself. I just feel mildly satisfied with the guitar and wonder if another guitar all together would be more my style. I'm interested and hearing from people with this guitar and what they did as far as mods are concerned. I have owned a Fender '65 Mustang RI that I modded with Lace Sensors Red and Blue, Mastery Bridge and TUSQ string tree. I have also owned a Pawn Shop Mustang which was much more versatile. FWIW I still prefer the Jaguar I think it is my second favorite with the Tele still being my favorite. I probably will keep it around for a player guitar and it is nice to have something different. Interested in hearing what other Blacktop Jaguar owners have done to this guitar?
Top

I had the black one for a couple of years and regret getting rid of it..

The caveat being, by the time I sold it I had replaced pretty much everything in it except the tuners, neck, and body.

Always felt that the electronics/pickups were only so-so. I swapped the bridge pickup a number of times and it ended up with a Super Distortion in the bridge and a humbucker size P90 in the neck. Replaced the pots w CTS 500k, orange drop cap, switch craft jack and switch, cloth wiring. It was basically the first guitar I really modded. Oh yeah, a Nashville style bridge started the whole endeavor as the stock one was rattly. I think I was putting the daddario 11-56 set on it too. The whole guitar was ‘tuned’ and really quite optimal for noise/feedback/punk what have you.

Also got tired of the black pickguard and was too cheap to put a tort on so I opted for a WBW. Oh, proper Jaguar knobs as well.
Top

Here are a couple of my adventures in modding them, just photos I happen to have on my phone... 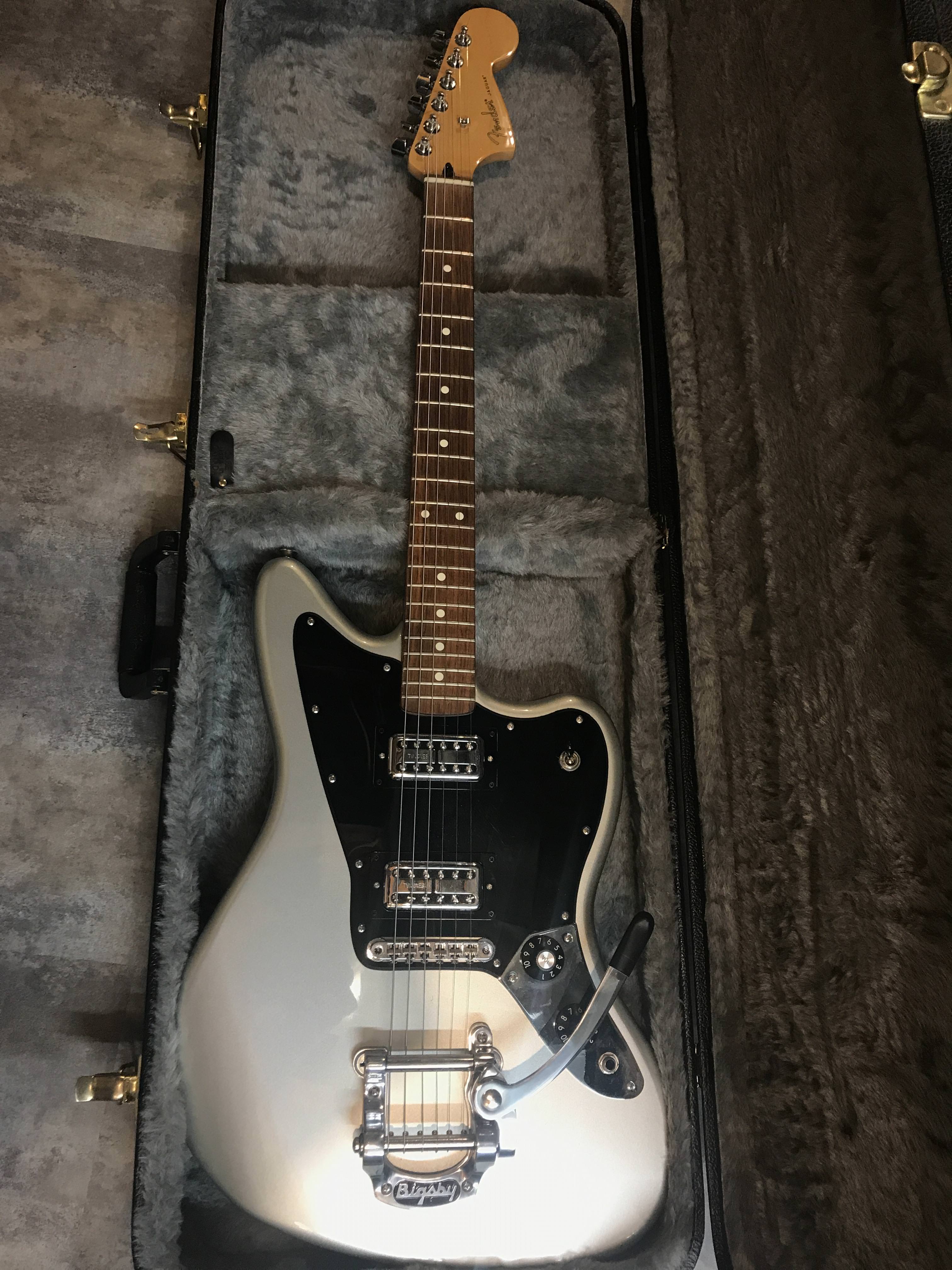 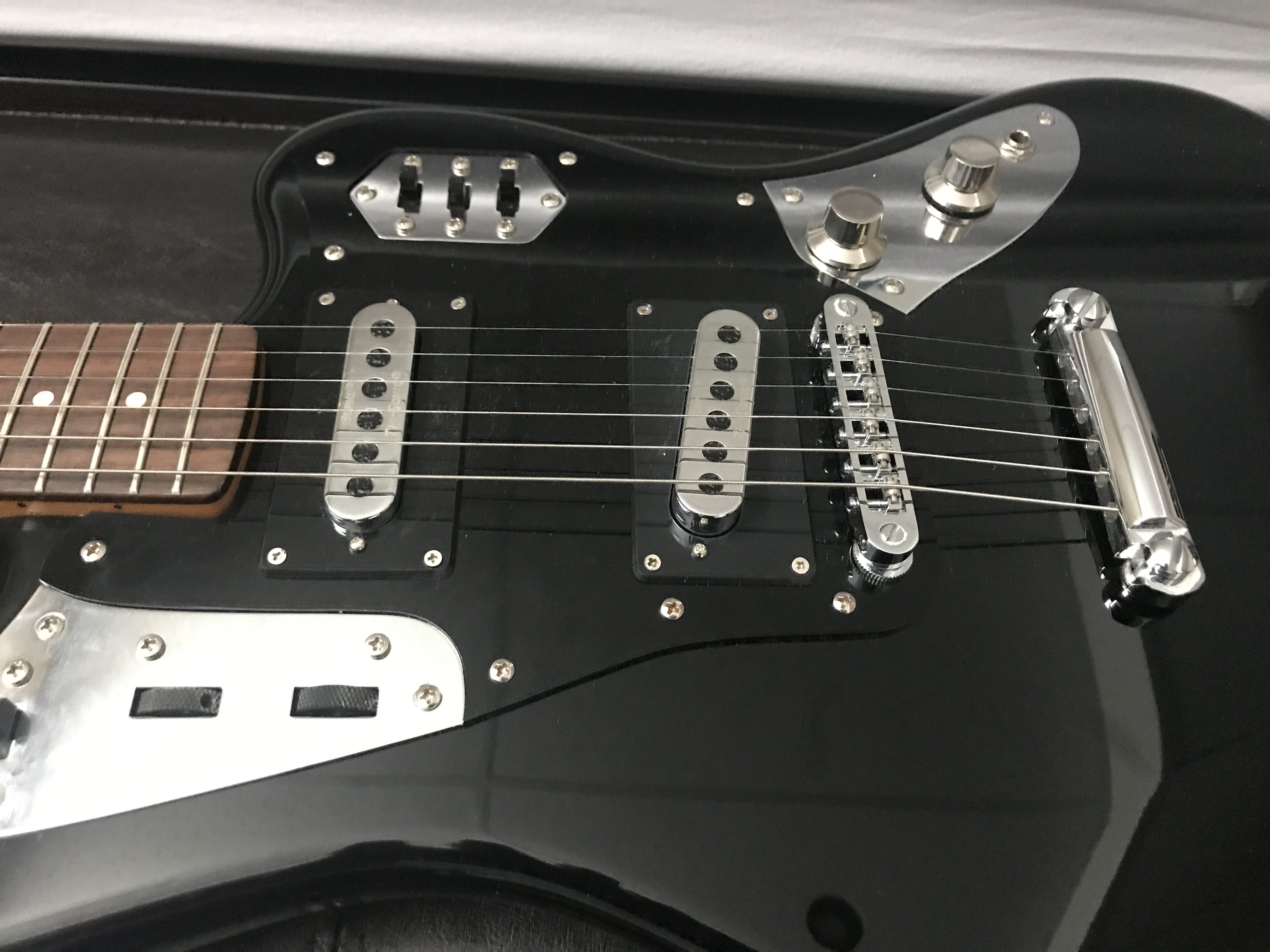 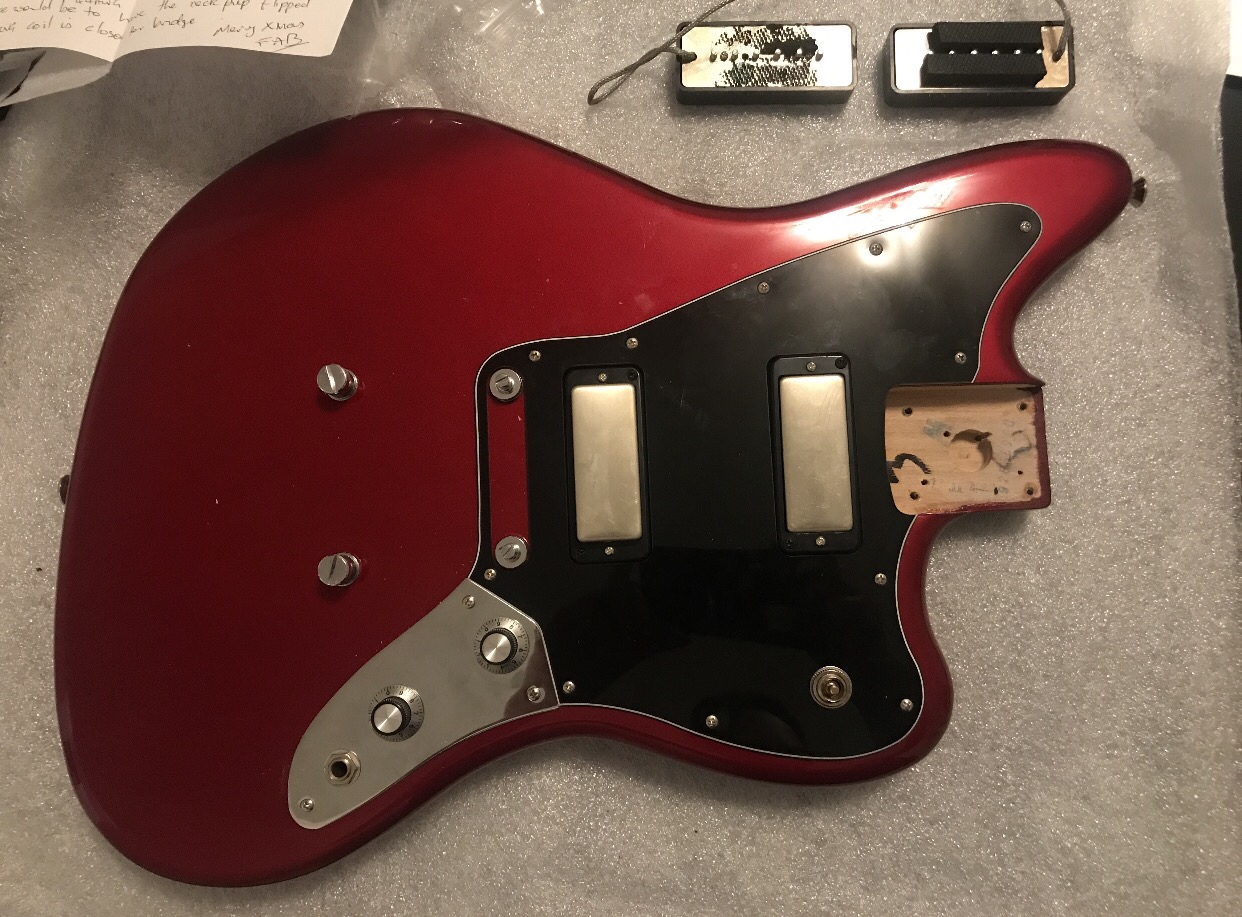 I've swapped parts around on these more times than I can count. Like I said...fun mod platforms. Lots of pickup options possible with HH routs. I have a couple on the bench right now (including the red one which is undergoing some cosmetic surgery).
Top

Pardon me if this is out of order but my guess is you wanted the Cobain Jag for the obvious associations, didn't feel right buying one so settled for something cheaper, and now you have a guitar you like but don't love.

I'd say it depends on what you find gratification out of. Like everyone else says, modding is fun, and the humbucker routes give you a ton of leeway. It's nice to have a guitar in your collection that you don't care *too* much about for this sort of thing.

It's really just about what you want out of it, cause it's also very possible to throw a bunch of money at a guitar and realize you just don't really like it that much. A lot of people treat mods as a way to achieve their goals, and some people find joy in experimenting and tinkering endlessly, but in this case it sounds like you don't really have any ideas for this guitar and just find it lacking, so IMO I'd sell it and get something you do feel strongly about.
Top

That black Jaguar Special HH was like the first dream guitar I had with a specific model distinction. Always wanted a Jaguar and a Jazzmaster but unfortunately they were scarce in the early 2000s and the HH was like the only one that wasn’t $1200 or more. Loved it a lot, until I bought one, coincidentally the only one I had ever gotten to try in person, from a friend a few states away, a few years after he let me use it for the show my band played there on a tour. It totally fucked our set though because I knew nothing about how it worked and I hit the strangle or something and my sound totally disappeared and I stopped a song 2 MINUTES INTO THE SONG to start over and got into a Brian Jonestown style public argument with the other guitarist right there in the middle of the set.

Anyway by the time I owned it, it was beat to absolute hammered dogshit, needed a refret, the only case of permanent gunk on the fretboard (had to shave away tons of rosewood to get it off finally) I’ve ever come across, and because he’d toured it for 7-8 years and wrapped it in about 30 rolls of duct tape, a bunch of the finish tore off upon removal of said duct tape. Looked fucking horrible and not at all natural or honest. Totally sucked dicks.

It looked cool but was a dumb as hell guitar, for my needs anyway. I was gonna get a trem put into it and stuff, try and turn it into a more-typical Jag, but ended up trading it away for something else. Eventually got Squiers to upgrade and moved it along.
Last edited by Mechanical Birds on Mon Dec 09, 2019 5:18 am, edited 1 time in total.
Top

Well, I restrung her and cleaned her up. I went from stock strings to Elixir 10-46 Optiweb and it sounds more crispy and the strings feel more smooth. I think I'm going to keep her for awhile and if I decide to sell then I won't be out money by trying to mod. I feel like it is very versatile so trading for a Vintera '70s Telecastet Custom might not be the best option.
Top

Is a 24" scale guitar a good platform for humbuckers? Seems like it would turn muddy real quick, especially since heavier strings seem to play nicer with the vintage trem. I love 24.75" with PAF style humbuckers, so maybe I'm overthinking this.
Top

Yeah, you're overthinking it. 0.75" is not the end of the world. If 24" would be too warm for humbuckers somehow, then 25.5" would be too bright for single coils.

Plenty of jags and mustangs out there with humbucker, and they work well.
Top

Doesn't even make sense. Have never heard complaints about Jaguars or Mustangs being muddy...
"I don't know why we asked him to join the band 'cause the rest of us don't like country music all that much; we just like Graham Lee."
David McComb, 1987.
Top

I can speak to this.

I just bought the same model, only the pearl green shade (as it was the cheapest). After my tech set it up, it plays very well, but yes, the humbuckers it comes with are *extremely* dark, and therefore not very versatile. Even my tech, who has definitely seen some stuff, commented on how dark sounding the guitar was. I play pretty much everything except heavy metal or hard rock (bluesy distortion is about as distorted as I like to get, really) so I knew I wanted to switch them out for something more versatile.

When guitar fetish had a Black Friday sale I bought the double coil gold foils. They are much better than the original humbuckers! Idk I’d they’re anything like actual gold foils, but they look really cool and sound great — full, rich, a little kkrrrraaaaangy and not dark. Could definitely get some surf tones with them, and also take pedals very well.

My other guitar is a G&L tribute fallout, which has a ton more sustain than this jaguar. That lack of sustain, along with the shorter scale length, have taken some getting used to. I do miss being able to use a whammy bar, but appreciate how it stays in tune. I feel you about the Cobain jag, but who has that much coin for a Mexican guitar? So this was within my price range, allows me to tinker at will (as it’s not so pricey I’m worried about it), and is very versatile. It is slowly becoming my favorite, and I think it’s just because it’s fun to play — the scale length has a lot to do with that.
Top
Post Reply
12 posts • Page 1 of 1