Kill it with fire.
Top

I see a copy of The Shining on the bookshelf. Makes sense, it looks like he tried to axe murder that guitar.

Make: Rukavina
Model: J
Price: $1,480
Body Material: "African mahogany with center laminations of black walnut and wenge"
Scale: 25"
Tremolo: None
Is the lower waist anywhere near the bridge: Close
Good / Ridiculous / Lame: It's certainly not inspired. Do you think that weird bevel on the lower bout was done on purpose?

We should have a name for the growing breed of "Jazzmasters" that are really just superstrats.

I'd nominate "Shredmaster" if it wasn't already taken.
Top 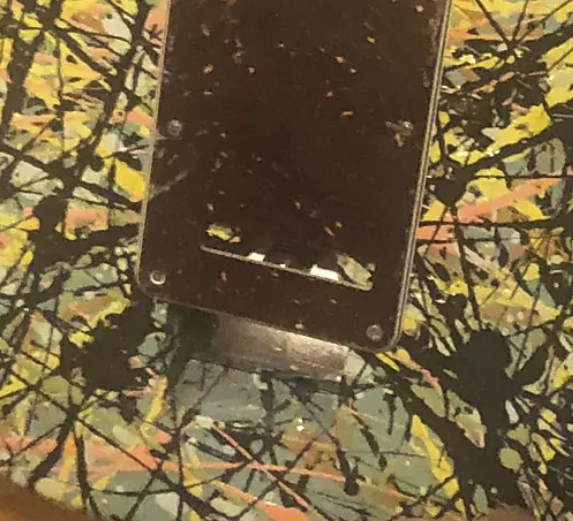 I'm intrigued by this approach of routing by just going straight through the body and then trying to cover it up partly by the strat trem cover.
Last edited by surfin_bird on Sun Aug 12, 2018 8:26 am, edited 1 time in total.
Top

I'm intrigued by this approach of routing by just going straight through the body and then trying to cover it up partly by the strat trem cover.

Yeah. That one is a "conversion" monstrosity.
Top

I'd nominate "Shredmaster" if it wasn't already taken.

If they weren't matched I'd say both halves look like they come from different guitars.
Top

Interesting to see that the shape seems to be becoming more and more popular in the Metal scene. The one scene that always used the ugliest guitars.
"500€? That's the price of a J Mascis Jazzmaster!"
Top

I think that Rukavina one isn't so bad. More Telemaster than Jazz/Jag, but apart from that...
Top

The german carve on the Rukavina is a nice touch, not executed as well as it could be, but nice. I think the edge sound have transitioned into the radius as it went round the horn instead of just being a sharp transition on the upper part of the horn, but that is a real trick to do with power tools and not all have built the skill to do such things with hand tools.
Logic gates based on billiard-ball computer designs have also been made to operate using live soldier crabs of the species Mictyris guinotae in place of the billiard balls.
Top

Holy crap, someone actually built the guitar I "designed" in the back of my maths book when I was 7.
Top

sirspens wrote: ↑
Tue Jul 31, 2018 8:26 pm
This guitar is neither an offset or handmade, but the "maker" claims both, so I am going to make fun of it. Originally I was going to add a disclaimer that I'm not better than this person, but then I saw a trove of Ayn Rand books on the bookshelf. So, I am a better person than whoever this is.

Make: N/A
Model: "Jaguar copy"
Price: $1,000 + Free Shipping
Body Material: "Not quite sure what kind of wood it is either but it is extremely light."
Scale: 24"
Tremolo: Floating
Is the lower waist anywhere near the bridge: It's not an offset.
Good / Ridiculous / Lame: Okay, let's break down what this guy is selling.

"this is the underground band's guitarist's guitar."

I've been watching this guitar for a couple of weeks, saving it for a slow time. In that time, the price has INCREASED by $200. And, as we go through what this is, that will become increasingly ridiculous.

Here's what I gather from the information provided: Francis had a non-Fender Stratocaster copy. I'm going to go out on a limb here and assume a cheap copy, based on the fact that he was willing to destroy it and that the wood is "extremely light", so most likely basswood. He hacked off the two bouts to somewhat resemble (read: not at all resemble) a Jaguar. I am guessing that his finish wasn't much to be desired because he then chose to cover it with (HIS WORDS) "acrylic paint using a Jackson Pollack splatter technique." He threw craft store acrylic paint at it? I guess at least it wasn't tempera paint. The pickguard is a hacked up piece of tort, originally from Warmoth, that looks like it was shaped with a wood chisel.

If I'm seeing the angle correctly here, the TOM bridge is installed at the opposite angle to what is correct, and then all the saddles are all the way to the back, which is not the direction they would need to go in to compensate for the incorrect angle of installation. Looking at the body, the bridge seems to be installed about where a Stratocaster bridge would be. But it is a 24" scale neck.

Then, to top off this stunning masterpiece, the guy threw some decent electronics and hardware at it, as well as a Warmoth neck, which are without a doubt the only things on the guitar of any real value.

As I said, the guitar has been posted for almost 2 weeks (being reposted at some point along the way). The guy originally promised a demonstration video, but that hasn't materialized.

Francis, if you happen to be reading this somehow, that guitar isn't worth $1000. Hopefully you learned a lot while working on it. But what you learned while working on this guitar is about all it is worth. Also, Francis, I really want you to hear me on this: if you are older than 14, throw out the Ayn Rand.

this picture bothers me on like 100000 levels. the biggest one is he's clearly brought/stole one of the books from a library and not taken off the fucking sticker. seriously. my friend used to work as a librarian and she said book theft was really common.
offset guitars resident bass player.
'Are you trying to seduce me Mrs Robinson? Or do you just want me to solder a couple of resistors into your Muff?'
Top

s_mcsleazy wrote: ↑
Wed Aug 15, 2018 4:04 am
this picture bothers me on like 100000 levels. the biggest one is he's clearly brought/stole one of the books from a library and not taken off the fucking sticker. seriously. my friend used to work as a librarian and she said book theft was really common.

To be fair to Francis, I own several former library books with tags on them, including the entire Foundation series. I bought them from a library clearance sell I came upon when I was on vacation several years ago. So, it is possible that they were acquired on the up and up.
Top
Post Reply
173 posts