Talk about modding or building your own guitar from scratch.
Post Reply
293 posts

Looks right to me, FenderBob.

EDIT: I do know that Scott Zimmerman took pictures of each of Kurt's Mustangs. I'm not sure if he would be willing to share, but I can ask him when I get the chance.
Top

AcrylicSuperman wrote: ↑
Mon Jun 01, 2020 11:25 am
: I do know that Scott Zimmerman took pictures of each of Kurt's Mustangs. I'm not sure if he would be willing to share, but I can ask him when I get the chance.

That would be beyond cool!
www.youtube.com/user/cymbaline87
Top

Yeah that would be great...I am sure he's got a list of serial numbers as well...maybe he would share that.
Top

The O must be a zero in the Skystang III serial number.

Yes. You are correct. That was a typo on my behalf.

The riots in America have been intense, and I've been sleeping with one eye open all week.

Edit: I made two typos. That first serial I posted was supposed to be an O. I corrected that and the 0 in the original post. And with that, I think I clearly think I need to get some sleep.
Top 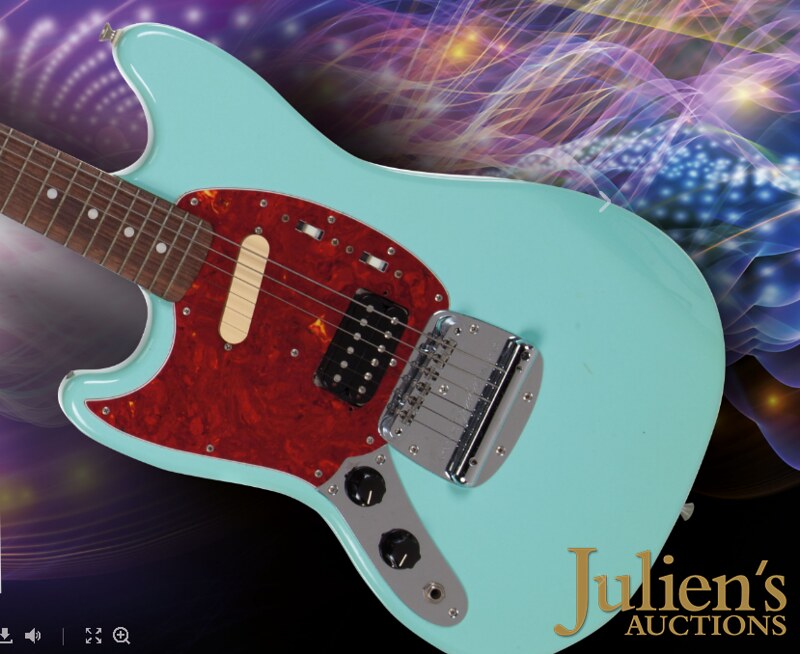 Kinda weird that one got an abr-1 bridge and the other blue one and red one both had Nashvilles fitted.

Not too sure what the compstang and Jagstang prototype were fitted with.
Top

Not too sure what the compstang and Jagstang prototype were fitted with.

I always heard that the Jagstang was an abr-1, but can't actually confirm that.

To be honest, I think they were using whatever they could get their hands on. Some of them had jbs with long legs mounted to the wood, while others were mounted to the pickguard. 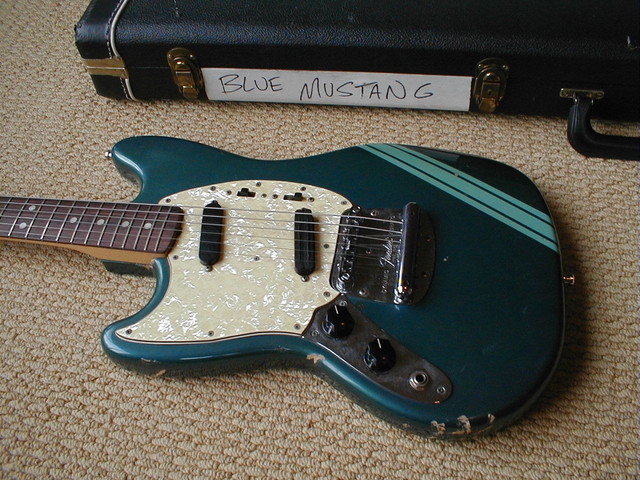 Is this the actual Teen spirit Mustang?
Top

Yes. It's aged a bit. But that was taken at the MoPop behind the scenes. When i saw it in person 12 years ago, it wasn't that green, but it has been under a lot of lights since then.
Top

Not too sure what the compstang and Jagstang prototype were fitted with.

That is the one Bobby had... The hole on lower horn from strap button is visible. I know it's the internet, but had read that not everything that came on Skystang III stayed on it... If ya know what I mean.
Top

Hello dear fellows,
It’s been a while since my last post but, as you can see, there's still lots of work going on behind the scene.

Today I have a rather huge discovery to share.
I know this thread is already massive in length, so I won’t be double posting pictures that are already available.

Let’s start by going back one second at page 15:
http://www.offsetguitars.com/forums/vie ... 0#p1596680
as we can see in the diagrams, Red prototype and the Production Model are different.

Yet, as I was studying the latter l was seeing anomalies in shapes between the many samples, anomaly of which I was finding confirmation on AutoCAD as I was using the scan of a CIJ 2002 JS pickguard our fellow Fenderbob sent me and that I had digitalized to get a few things safely set.

Thing is, even though said pickguard was pretty much consistent in terms of outline/pickups/screw holes/switches location and also having the frets also matching the correct spacing: body shapes were different from one guitar sample to another.
At one point I just left the thing alone as we had no reason to inspect said specimen.

Then a couple of nights ago I've stumbled in one picture that was engaging again that bug in my head, then I've found this peculiar one: 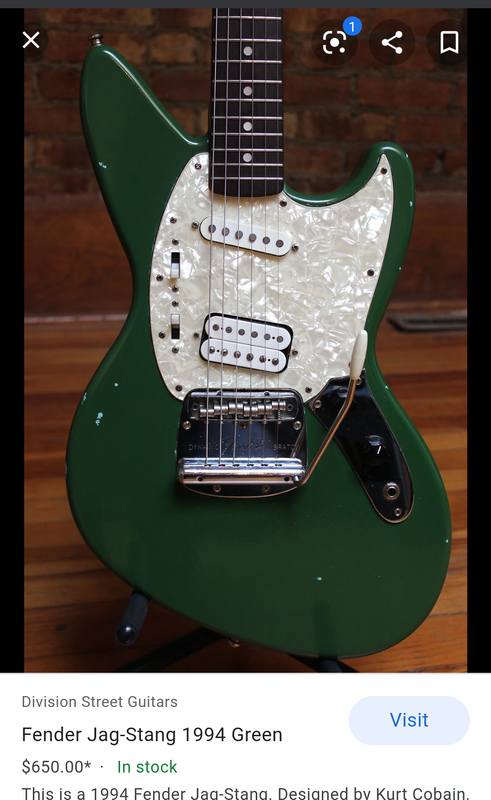 BOOM. The shape of the cutaways was EXACTLY like Red prototype's.
I went on reading the details: this refinished "Kelly green" was once sonic blue from 1994.
"1994?! What?

"
I had to check its serial number and the actual year is 1995, but its nonetheless another ringing bell in my head as I remember myself reading this following quote in the Jag-stang forum (I'm pasting it):

"The Jag-Stang was “officially” announced at Winter NAMM 1996 – January 18, 1996. It’s possible some were available to buy before that date... but more likely those were just manufactured in 1995. So guitars for release in 1996 are generally considered 50th anniversary"

I also remember that on that same forum there is a sub section with a registry of all the Jag-stangs specs people were submitting. Year, serial number, modifications and name of the owner. You can check it here:
https://www.jag-stang.com/registry/

Long story short, after a long-lengthen dug up, I've gathered and inspected a lot of the Jag-stangs out of that registry and I was astonished.
I finally had proof my eyes weren't tricking me, at all.

Even thou I couldn't find any Jag-stang backing from 1994, plenty have being produced from 1995 onward.
I noticed that from the very first run up to some point in time in 1996, the shape of the very first manufactured Jagstang was the closest (if not scarily identical) to Red prototype’s:

Another crucial factor that comes in play is that has been plentifully reported throughout the various forums that the very first Jag-stang had horrible fitting, pretty bad neck alignment and I've nonetheless stumbled in a Fiesta red body which neck pocket’s bed was cut dramatically undersized.
This means one MAJOR thing: Fender must have surely realised that the very deep horns cutaways weren't providing the neck enough wall to sit properly.
Production went on with this bad quality for the entire 1995 up until some point in 1996 (remember, I've gathered a shitload of pics to back this up), then the shape has been corrected and the inner horns cutaways are now less deep and provide more wall for the neck alignment.
In fact, as visible, the top horn has been elongated and fattened (these things are known as I already posted that side by side comparison between Red Proto and Sonic Blue Production Model).

Furthermore, I haven't found a lefty prior 1996, which is sort of crazy if we think about it.
This could imply that the first run was a sort of "test run" based on Red to which they then made a correction later in 1996 when the official production and distribution began with the double offering of Right handed AND Left handed guitars, which both sported from now on the same shape.
(I also suspect the occurring of mixed matches pre '96 bodies mated with a post '96 necks, I'd have to further check).

You can see, this time the same pattern we had comparing Red prototype to a 2000s Production is now a 1:1 match between a '95 and a '96 (aka: prototype specs VS revised shape). 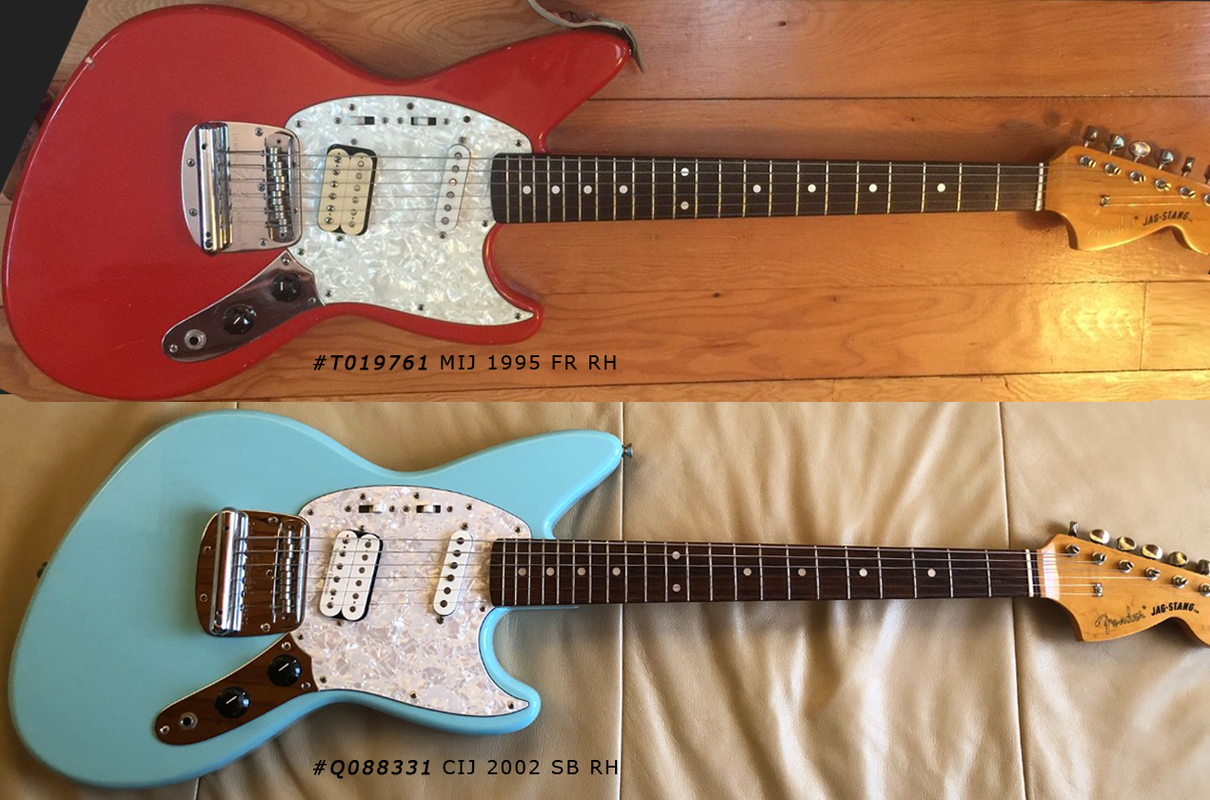 MIJ 1995 VS CIJ 2002: same pattern, prototype spec’d cutaways VS revised shape.
Even with perspective distortion, the differences are as clear as midday sun. 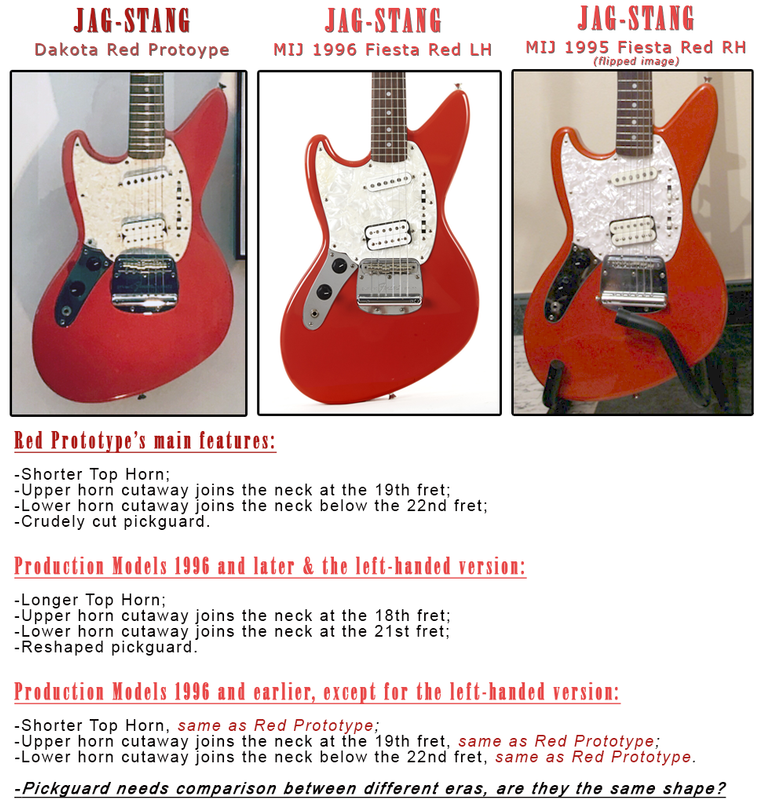 2) The revised shaped is most likely the reason why lefties were made later in time.
They must have probably decided that going to be produced in a much smaller batch, they wanted to get it right from the start.
Lefties are also already crazily priced on the used market for they are the most collectible.
Such an aspect must have placed a role in Fender's plan in that regard as it would be a great move from a collector point of view as, in the end, both Blue and Red Kurt's prototypes are the only left handed specimens with prototype unique shapes. They were never reproduced in the production model counterparts.
In short, owners of the very early pre-production Jag-stangs are unknowingly in possess of a much more faithful replica of the original. (God knows how would this discovery might increase their values on the Cobain tax);

3) If it's true that pre-production model was already in the works in 1994, this could mean that in Japan the factory was also already producing the necks, one of which (a lefty) could have been what has been put as a replacement on Red.
Same goes with other unknown parts that were cannibalised and then replaced.

I’m living you with a polite request, if possible.
In order to settle up the two shapes of the production model, I’d like to ask the collaboration of the owners for the digital reconstruction.
If you have one, please chime-in or send me a private message, I’ll keep you all updated as progresses are made.
I made a thread about how to accurately trace a body in a very domestic DIY fashion and little afternoon project during the lock-down:
http://www.offsetguitars.com/forums/vie ... e435d952f5