by tune_link
As someone who has a thing for blue guitars - I have Jazzmasters in Ocean Turquoise, Daphne, and Sonic blue - I am curious to see pics of guitars any of you might have in some of the following colors - ice blue metallic, tide pool, and lake placid blue. Doesn’t have to be an offset although of course that would be lovely.

I had a LPB Jaguar at one time but I sold it last year. The thing I’m most interested in here is seeing the intersection/differences between these three colors of blue. I know what I “think” IBM looks like and the pics of tide pool have looked close to that from what I’ve seen. Some of the lighter shades that Fender has called lake placid in recent years also look more like IBM to me (my personal reference for LPB is darker like the vintage guitars looked or maybe a modern reference would be the LPB Johnny Marr and 60s classic laquer Jaguars.

Anyway, I’d love to see your blue guitars so I can sort of cross reference and if I’m being honest I just love seeing other OSG members beautiful axes.

by Futuron
I have a thing for blues as an extension of my thing for greens. I prefer greens but Fender just keeps mostly doing blues as their non-black/white/burst/red option. Anyway, my current blues are pictured below. Tidepool is very similar to what current (or at least Mexican current) lake placid blue looks like, you need to put them right next to each other with the light on the same angle to tell the difference. Tidepool is slightly paler and perhaps with an extra thickness of clear coat to make it more deep plastic looking.

First photo is from around 12 months ago. Jazz bass is 'sonic grey', Duo Sonic is 'daphne blue', Stratocaster is 'tidepool', Telecaster is 'ocean turquoise'. 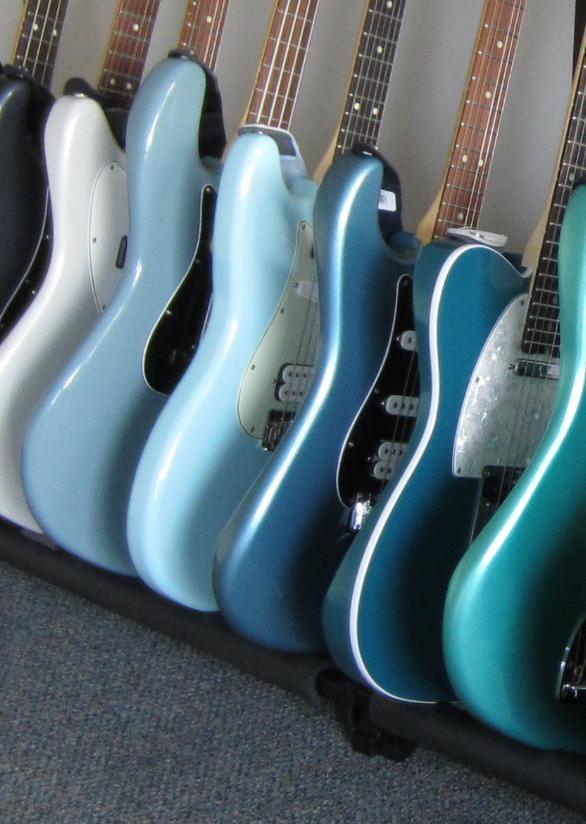 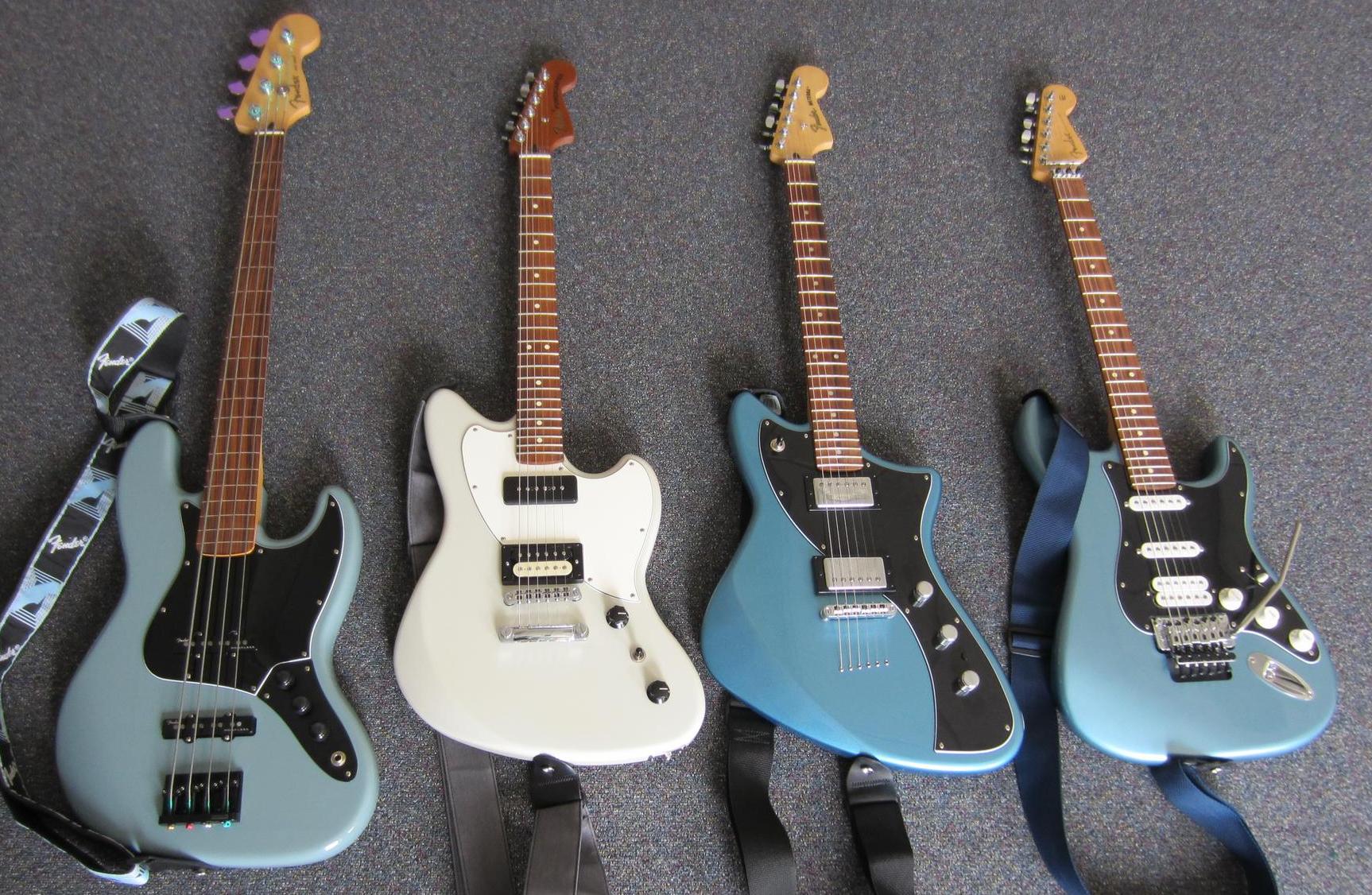 Bonus pic of the 'sonic grey' + 'daphne blue' with refinished Mustang in between. It was a very pale 'sonic blue', it's now (as shown) 'classic duck egg'. 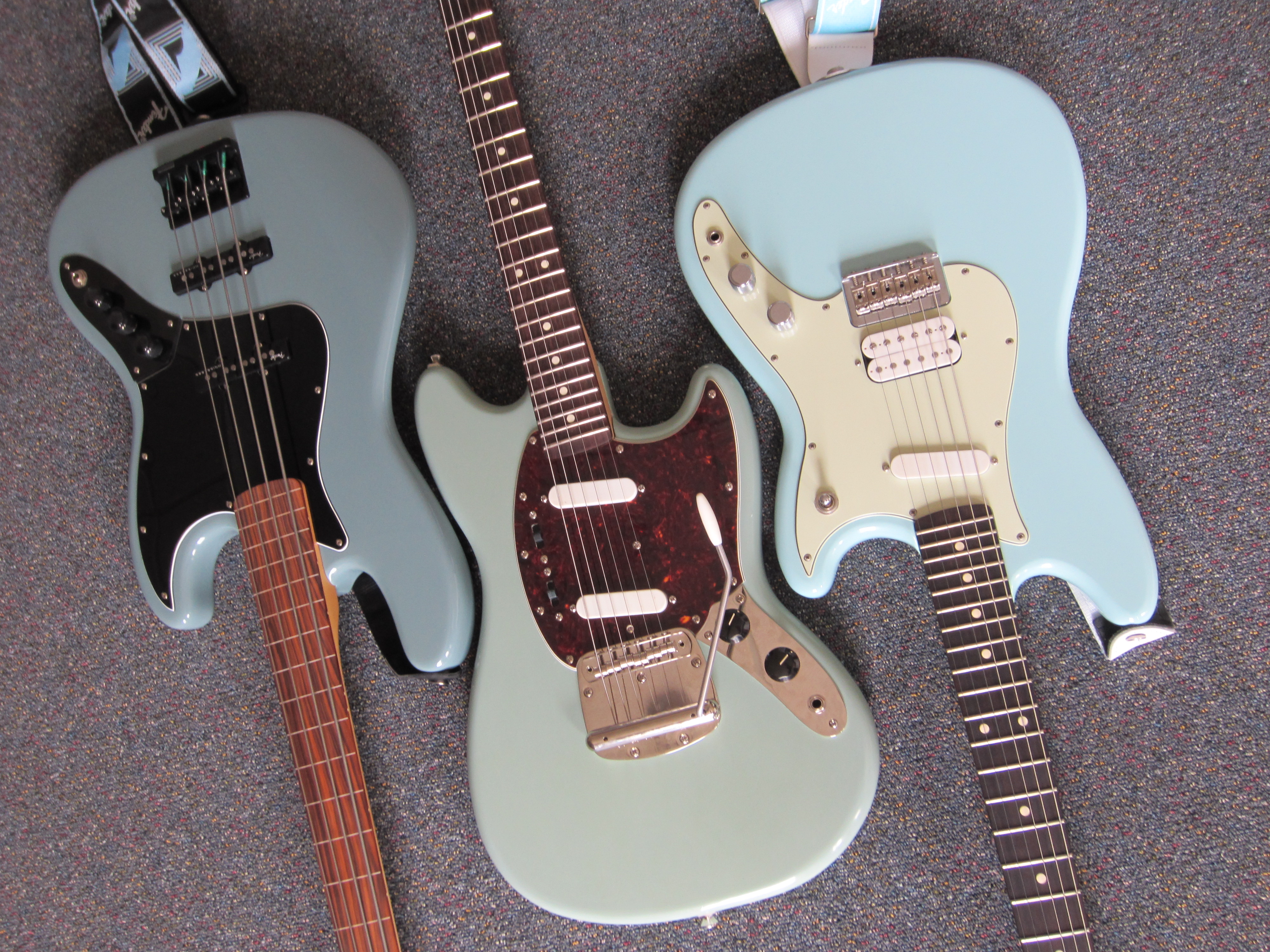 by adamrobertt
It's slightly misleading, but Firemist Silver is actually a blue color. I have a FMS Jazzmaster like this one https://reverb.com/item/25972476-fender ... ery-bridge

Paler than ice blue metallic, but still definitely blue. I believe the color was originally called "Firemist Blue" but they changed it to "silver" because they used it as the replacement for Inca Silver. 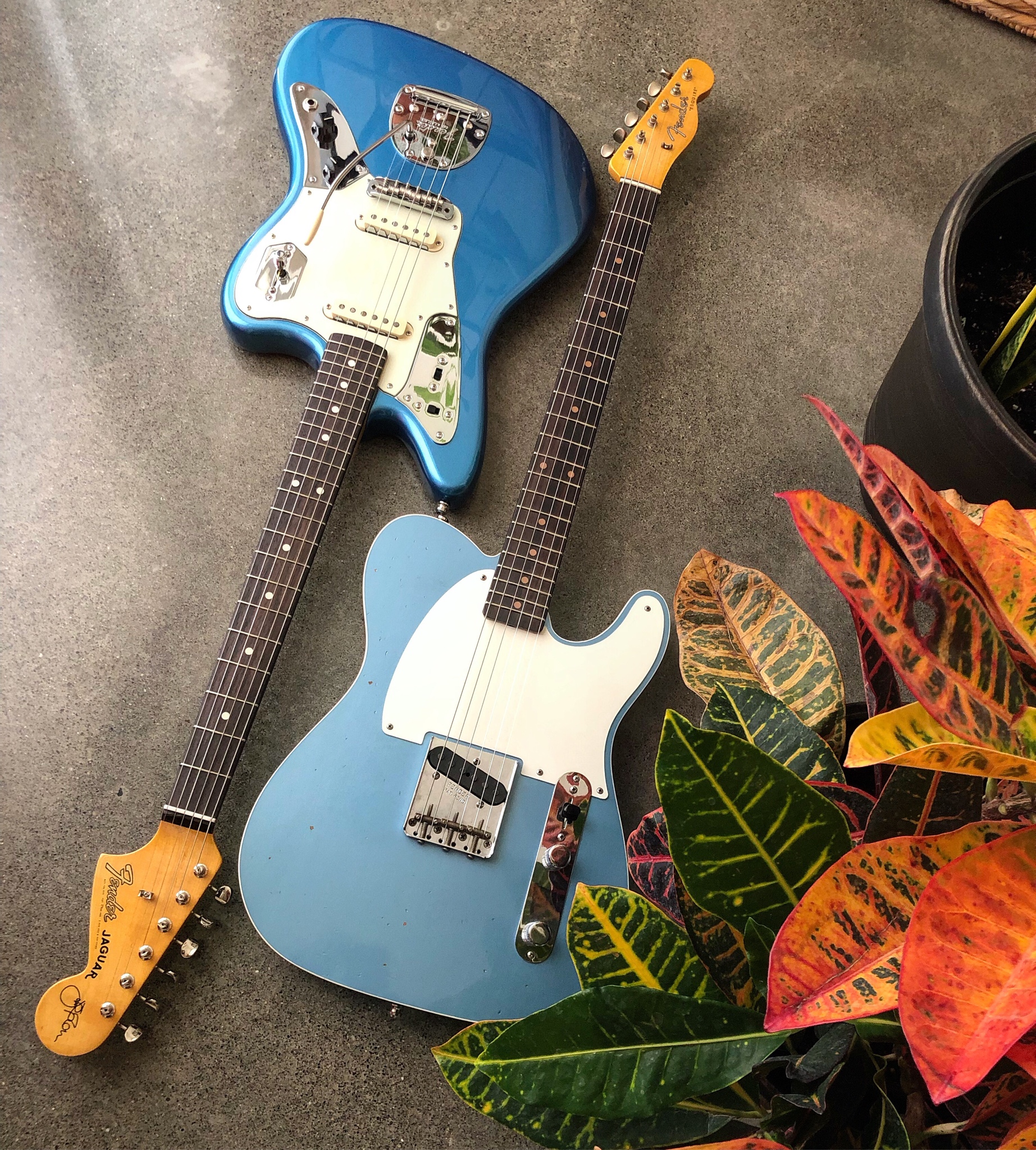 by tammyw
This has been posted before, but it's ice blue metallic beside firemist silver.

by tune_link
This is awesome! Thank you all for the responses! I can tell a big difference between the ice blue metallic and the firemist silver. Firemist Silver has been on my list of dream colors to own a guitar in forever partly because I do love that it has that hint of blue in there. I figure one day I'll just splurge and get one of those Wildwood ones.

In the meantime, it does seem like there isn't a huge difference between some of the lighter shades of lake placid blue vs ice blue metallic vs tidepool. I really like all of them. I've been eyeing those Vintera JMs for a while just cause I think it would be cool to have one in IBM with a matching headstock. I don't mind Pau Ferro if it's the right shade. My 60th anniversary is daphne blue (much darker than the Duo Sonic in the pics above) and it has a fairly dark PF fretboard. Some of the Vintera ones seem super light but other than that I think those guitars look great!

One weird thing I mentioned somewhere else on the forum and you all have probably noticed too is that the newer Squier guitars in Sonic Blue almost don't seem blue at all. It's almost an off white looking color in some of the pics I've seen. Seems weird. Even the vintage guitars that have faded or mod shop ones that come as "faded Sonic Blue" don't seem to hit that light of a shade.

All of the guitars posted here look amazing. Can I possibly see more pics of that Tele tho with the pearl guard! That thing plus the binding is outrageously sweet looking.

by soul1
One of my favorite colors was the "Old Lake Placid Blue" that is/was common on a lot of CIJ guitars. It's like a slightly faded and darker Lake Placid Blue, and I'm not sure why Fender doesn't produce more of these

by FenderBob
Would you like a little purple with your blue?

by Futuron
I'll see if I can get some shots of the Tele with the pearl pickguard, seems all the decent ones I have it still has the original tortoise.

Regarding the Squier sonic blue (I kinda consider it a toothpaste white):

original in front of off-white wall 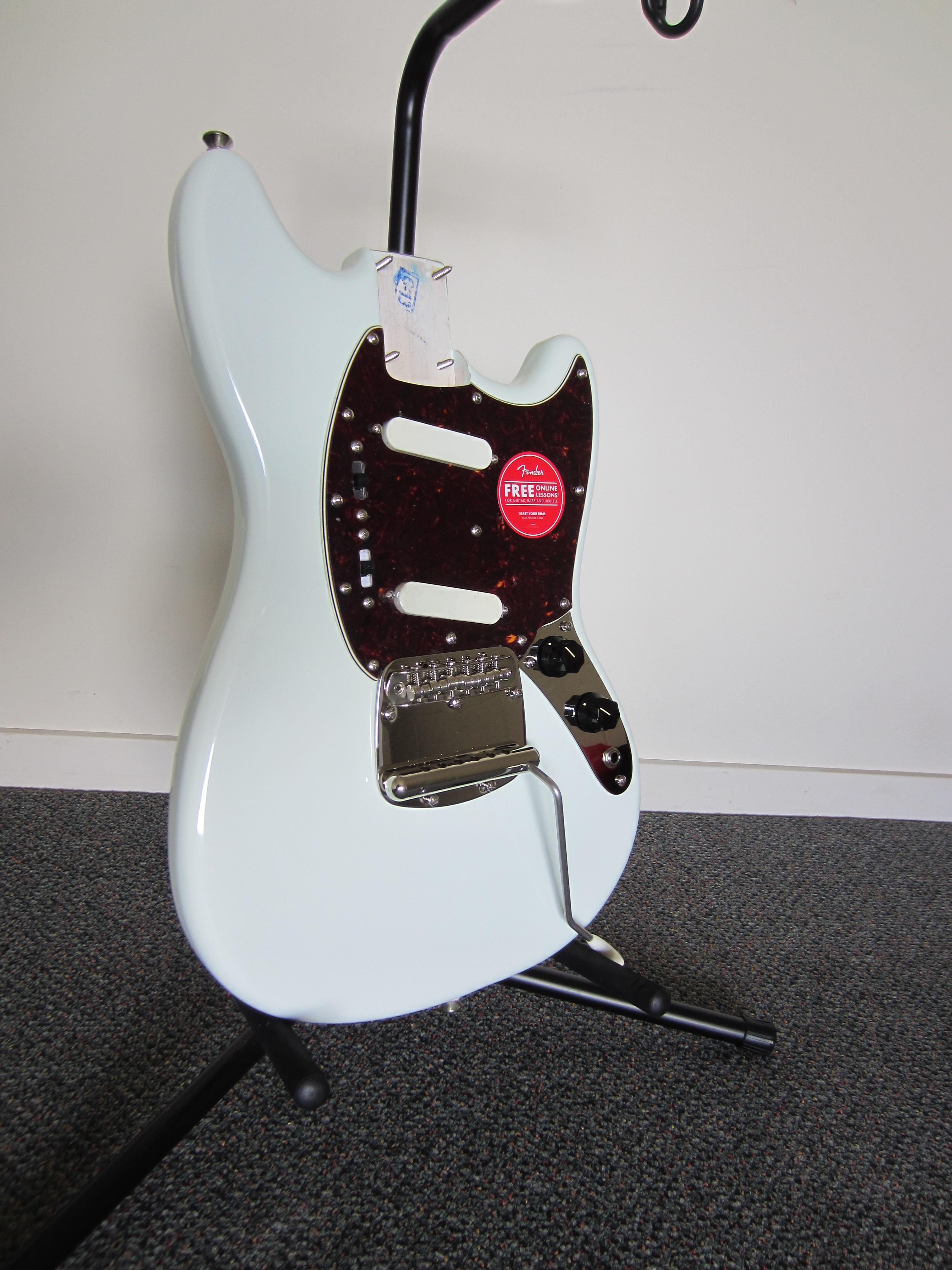 for white-balance, with a piece of printer paper 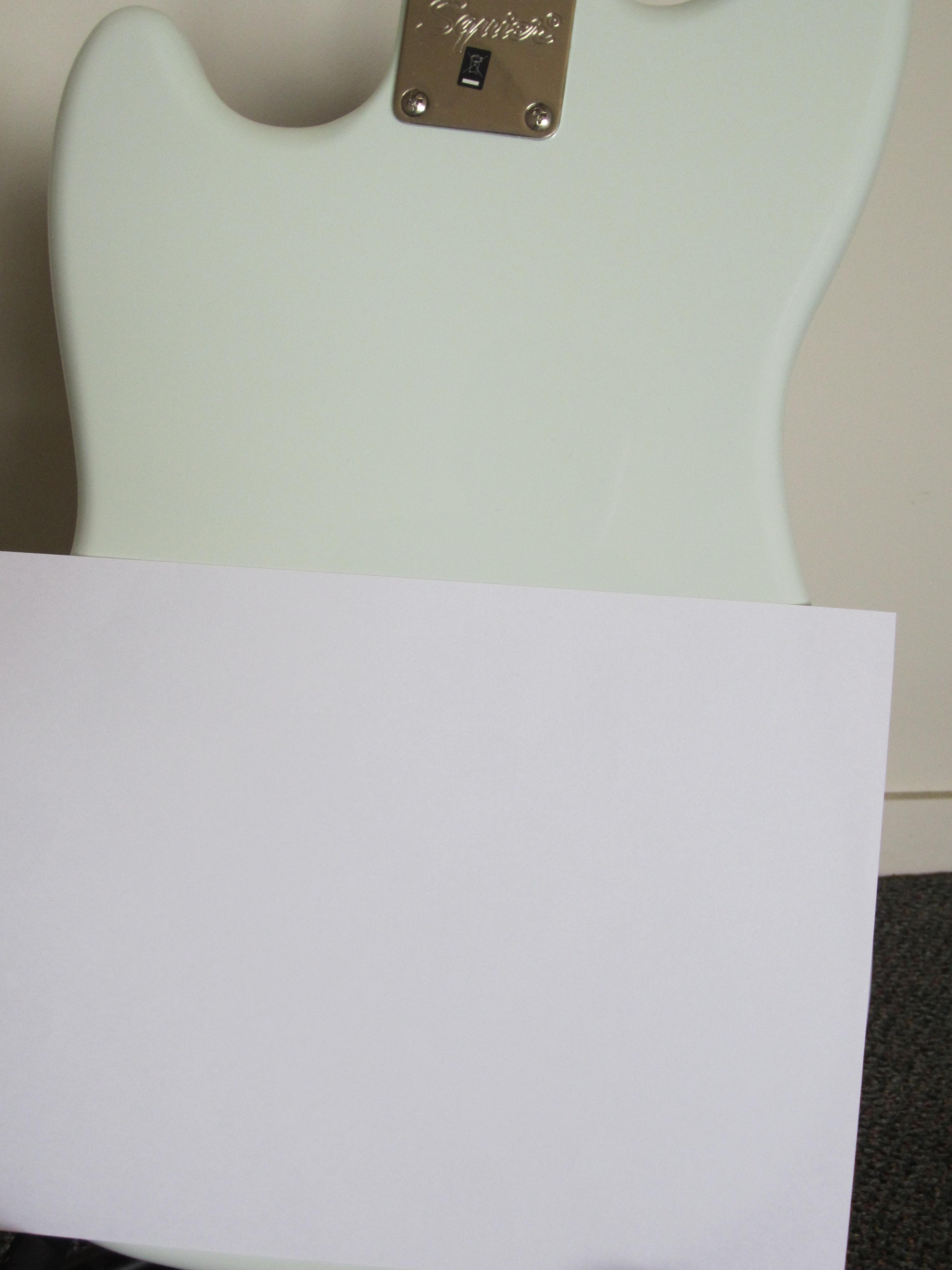 after refinish in front of the same wall (tell me I did the right thing!) 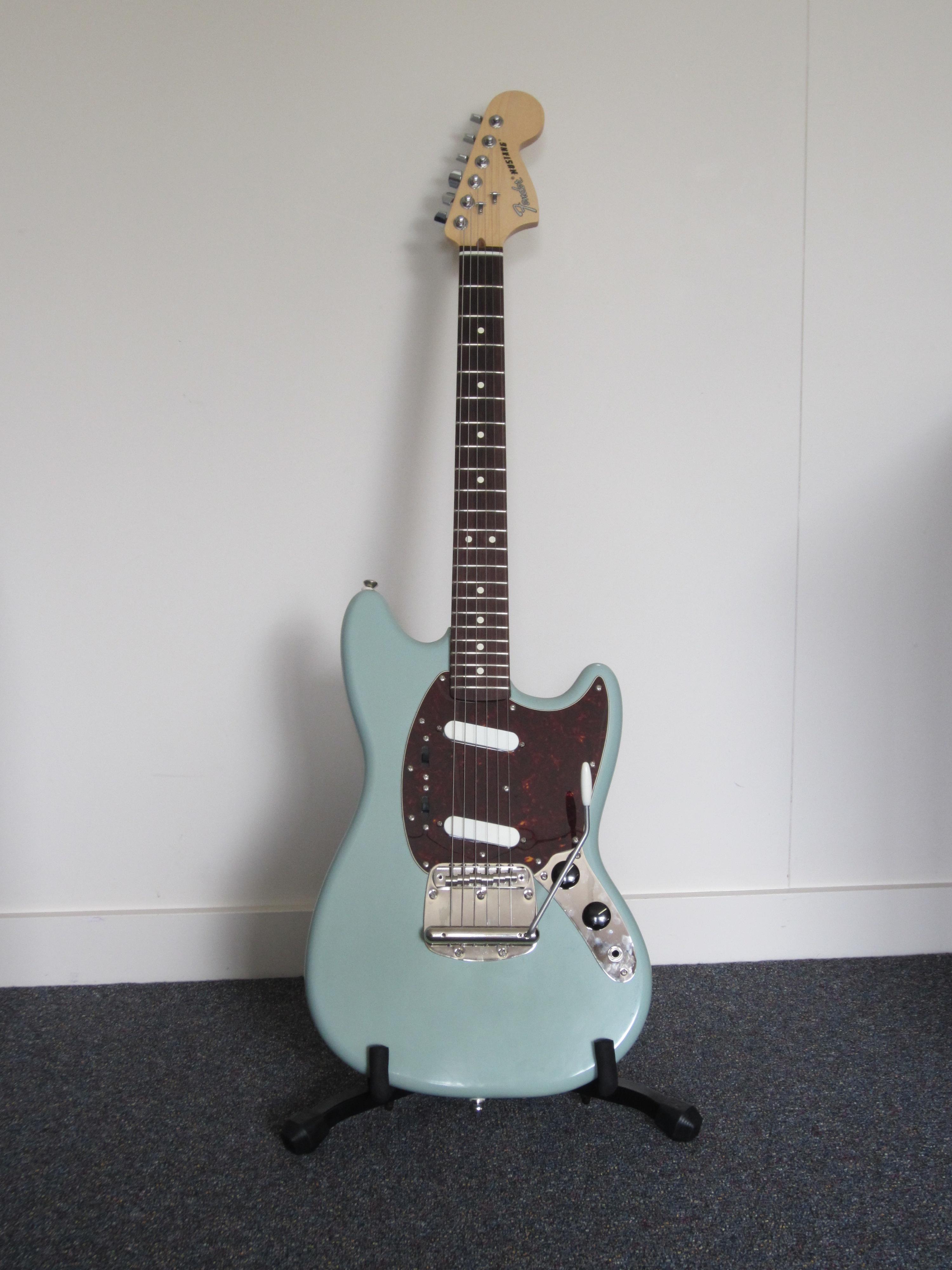 and here's another angle/lighting of the lake placid blue Meteora 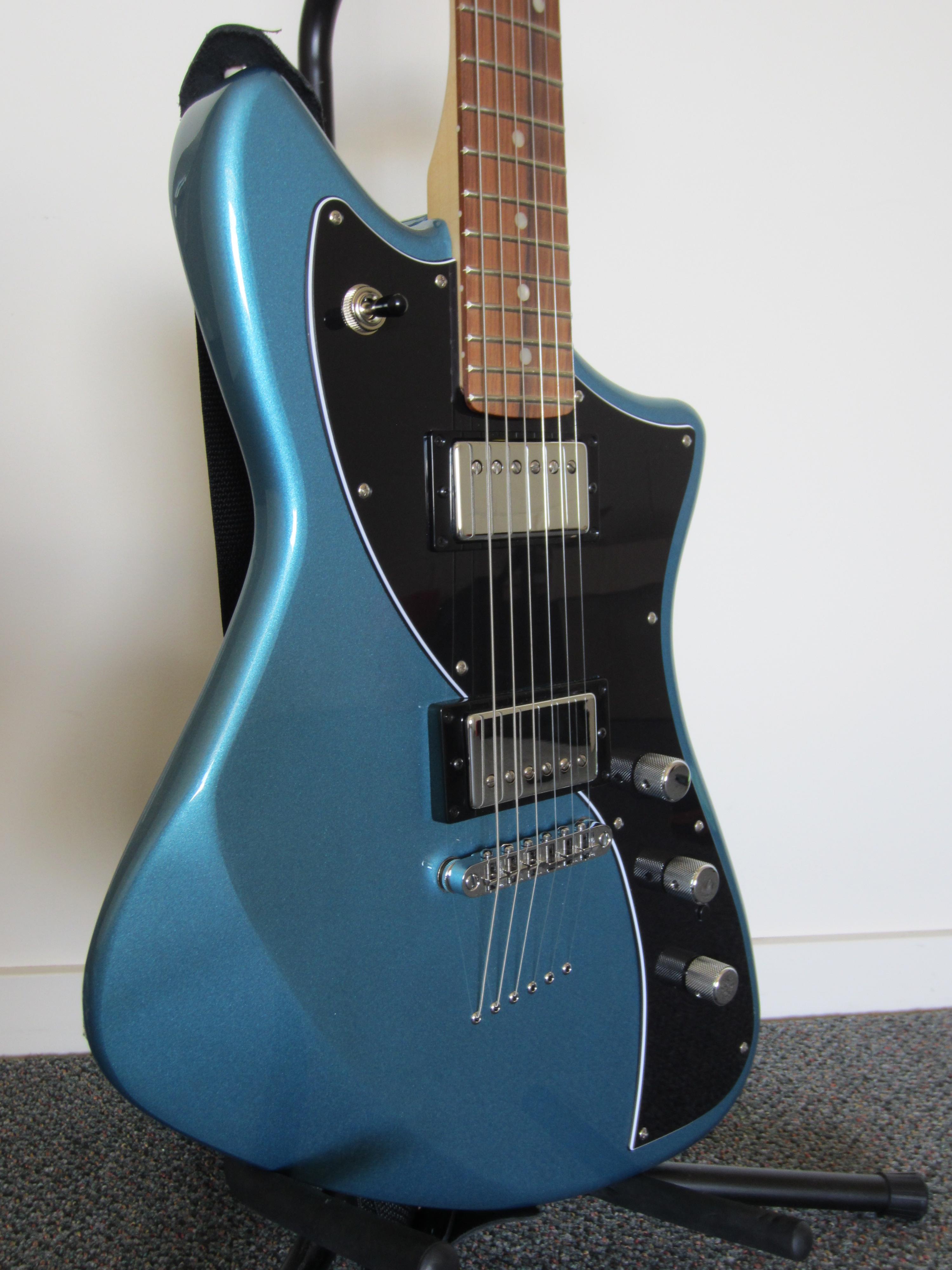 Never seen one quite like this before. It’s like they used the trans red as the clear coat instead of just the outside border

after refinish in front of the same wall (tell me I did the right thing!)

I had the same guitar and was always a little disappointed how pale it was, and that most of the time it looked fridge white. I eventually traded it and some other stuff for a sea foam green Vintera Mustang, that I might do a NGD on (haven't seen so much on here about them).

Here are my, more or less, blue guitars: 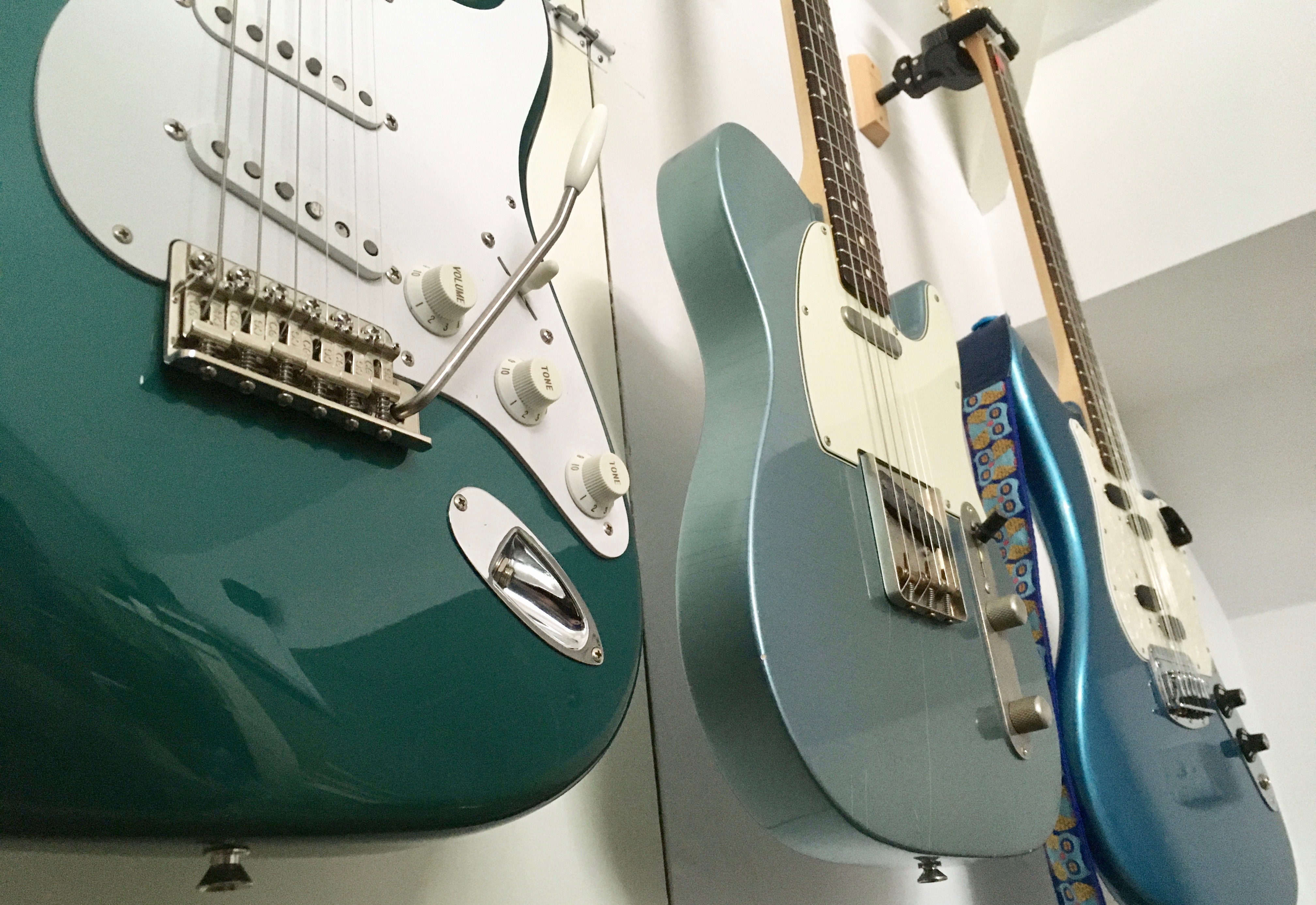 Left to right:
2004 Ocean Turquoise CIJ Strat, looking a little greener than when it was new, I think.
Rexter Ice Blue Tele (love it to bits!)
Mexican Lake Placid Blue on my Alternate Reality XII

I have plans for a properly sonic blue Thinline Tele, but haven't found the right (cheap enough) body yet. I've got the neck and most of the hardware.

I got the new Mustang in green as I already had the LPB XII - it's good to get one of every colour, isn't it?

Absolutely, and in hindsight that is exactly the guitar I would've bought instead if I'd thought things through fully before pulling the trigger, but a lack of reviews and opinions on it stopped me properly considering it back then. I'll keep an eye out for the ngd.

by Beltone
This is a well timed post. A couple nights ago I watched something like 5 consecutive demo videos from Cream City Music that were all blue JMs or Jags. By the end of it, there were a couple colours I couldn't distinguish anymore. The pics here help.

by mortron
Fender has had some great colours and combos over the years. Some too long, some not long enough. It's part of what I love about Fenders. Blue is one of those colours that can go with a lot depending on the shade. What I find frustrating is the total lack of consistency in the color names.

I feel like even tho the shade of red on a Coke can may be slightly different from 100years ago, you'd never get a room full of people arguing about what colour the can was. I'm just glad Fender doesn't run Coca Cola, or Santa probably wouldn't be red anymore... Tho if he looked like or of the dudes in ZZ Top, I could really see myself getting more festive.

Sonic Blue was my favourite colour as a kid. Like my memories of childhood, that too seems to have faded... Because I flat out think "sonic grey" was someone screwing up. And if some of the sonic blue out there is actually blue... Then my teeth are white... But am pretty sure they're carved from amber or caramels. I remember the JagStang thread was basically like watching a tennis match between Sonic Blue and Daphne Blue... All I know is the guitar I had in 1996 was Sonic Blue from Japan and looks nothing like anything I've seen since it seems. Which probably has something to do with that ordeal too.

If I said "fiesta red" or "sonic blue" or "lake placid blue" and asked you to visualize it... We would probably all picture something different. I think the Ice Blue Metallic looks rad. I've always had a soft spot for Pelham Blue from Gibson, but I couldn't bring myself to paint a Fender Pelham Blue. That's what my SG Junior GAS is for LOL. And I've seen that one in a bunch of shades too...

People may complain about others stealing Fenders designs, but even a 6 year old would be mortified to see what they're doing to the color wheel!

by tune_link
@Futron regarding that Mustang you definitely did the right thing!

I'm loving all the guitars posted in this thread.
All times are UTC-08:00
Page 1 of 5
Powered by phpBB® Forum Software © phpBB Limited
https://www.phpbb.com/