Bringing your older offset back to life.
Post Reply
27 posts

I've been away from the forum because I needed to control my guitar addiction at least for a year or so. Which has been done.
My girlfriend and me bought the perfect house for us (from 1911 !! it's super vintage, very yellowed, blemished and all

), and all our energy was turned towards this : making it our home. It's not done yet but the goal is about to be achieved.
And now I can be back into the almighty guitar world !!!

Back in last june, I had a gig with a fellow DJ. It was actually three gigs in a night : the 40th anniversary of some woman, then the celebration of the end of the gaelic football championship (yet super drunk, best crowd ever) and back to the 40th anniversary until late at night/morning.
Hard won money, so I decide to use it for something special.

In the middle of my work on the renovation construction site I often browse the ads on internet. Temptations were plenty and daily, as you can imagine. But I hold tight on my idea and something popped up 3 weeks ago. I received it 8 days ago, due to the french disturbances and strikes about the retirement law, and instantly began to work on it. 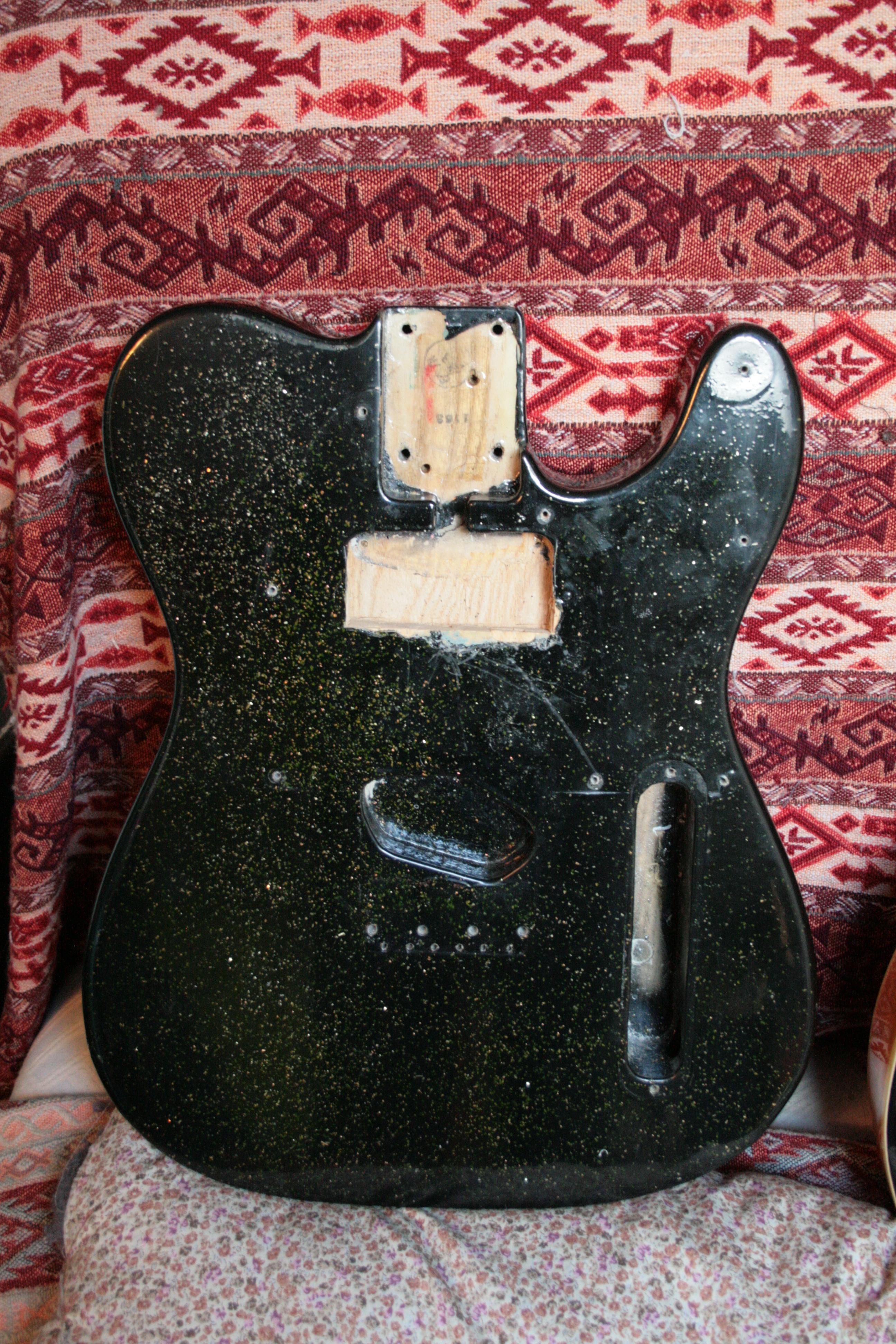 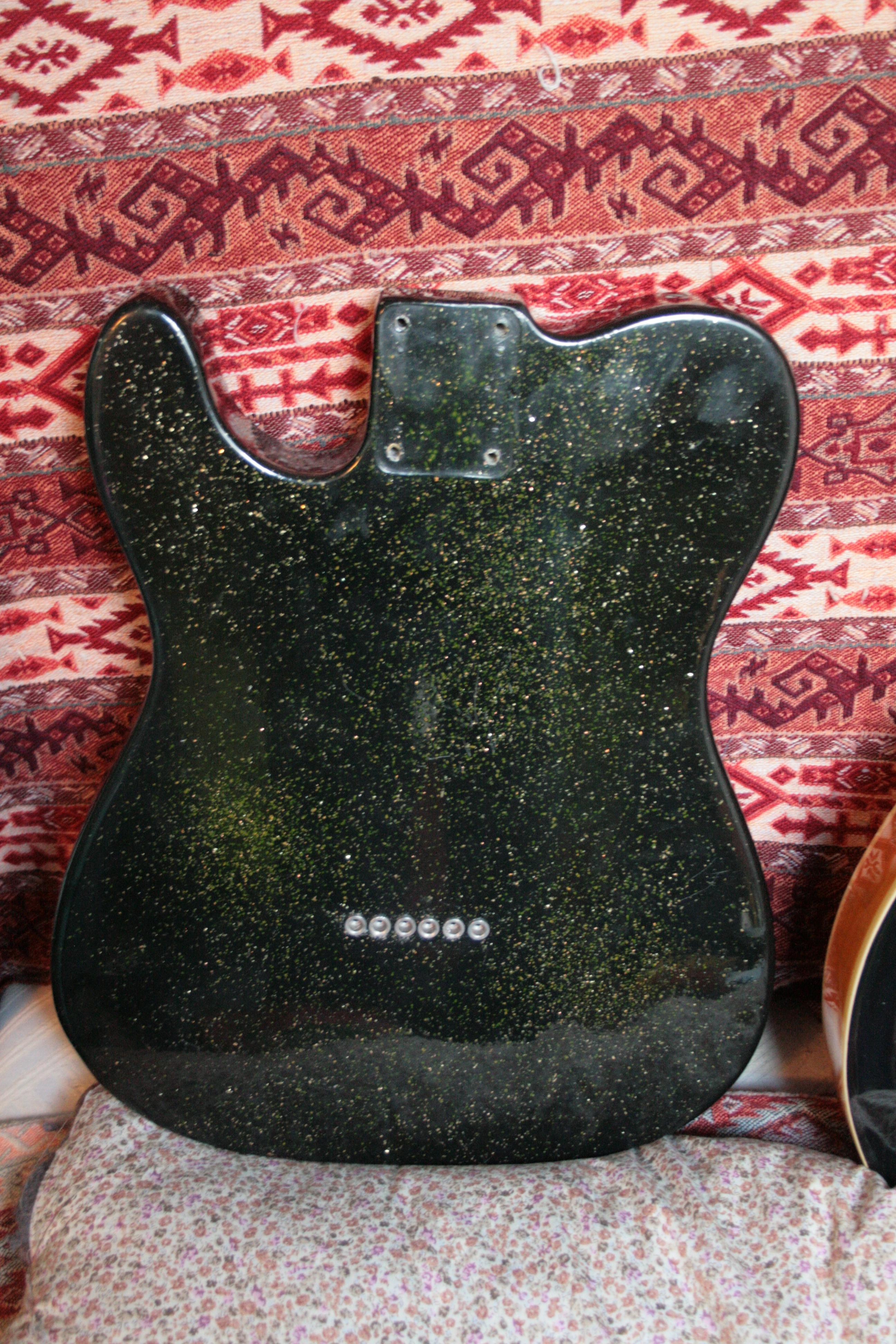 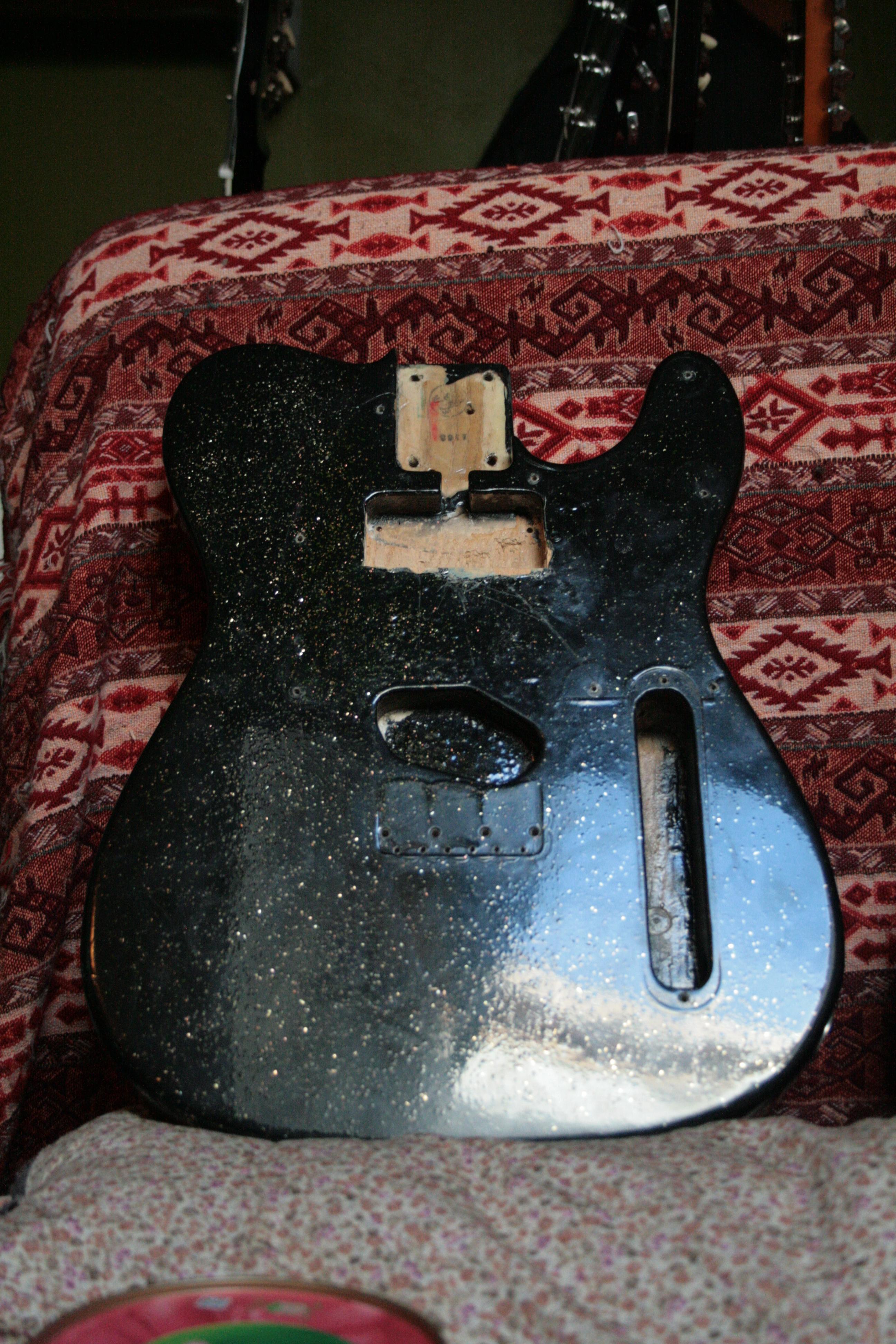 And it'll be my first tele...ever. So this is special.
18 years ago, nearly, I played a '76ish tele in a guitar shop, apparently from the Bruce Springsteen's spare tour stable. Don't know if it was true or a seller thing but I remember this guitar blew me away. That was my first experience with teles.
Then I briefly played a friend's Baja 3 yers ago, and a deluxe 2 months ago, a student of mine took it with him to work on his amp sounds. It was great.
So I began to have some GAS on having a tele.

And this body popped up !!
At a very very coooooool price, due to the refin and the butchered neck cavity : 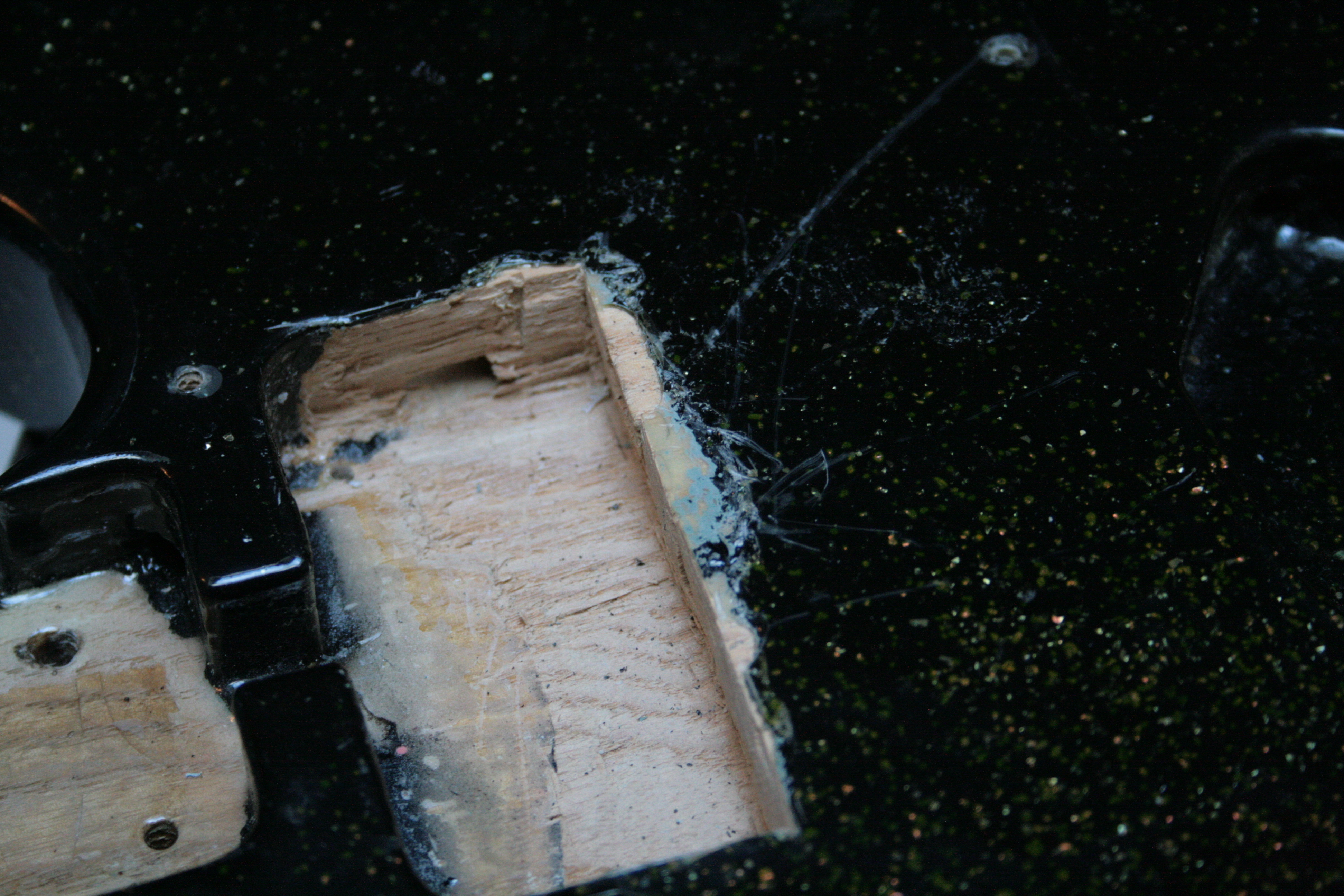 On the ad, I thought it was some dark green glitter finish, and told myself it might be fun. But it is not. The guitar is actually black metal flake and it's not well done. 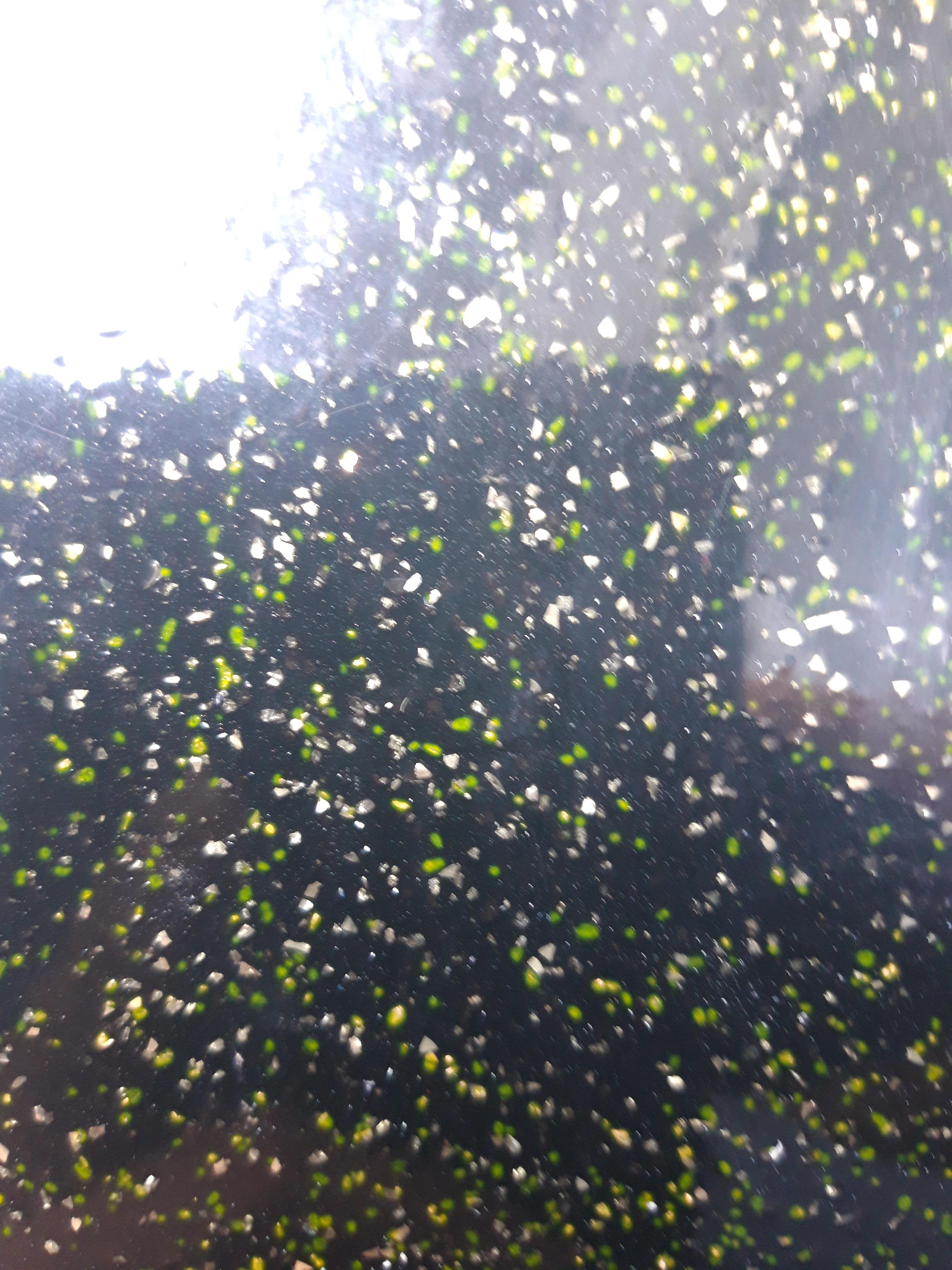 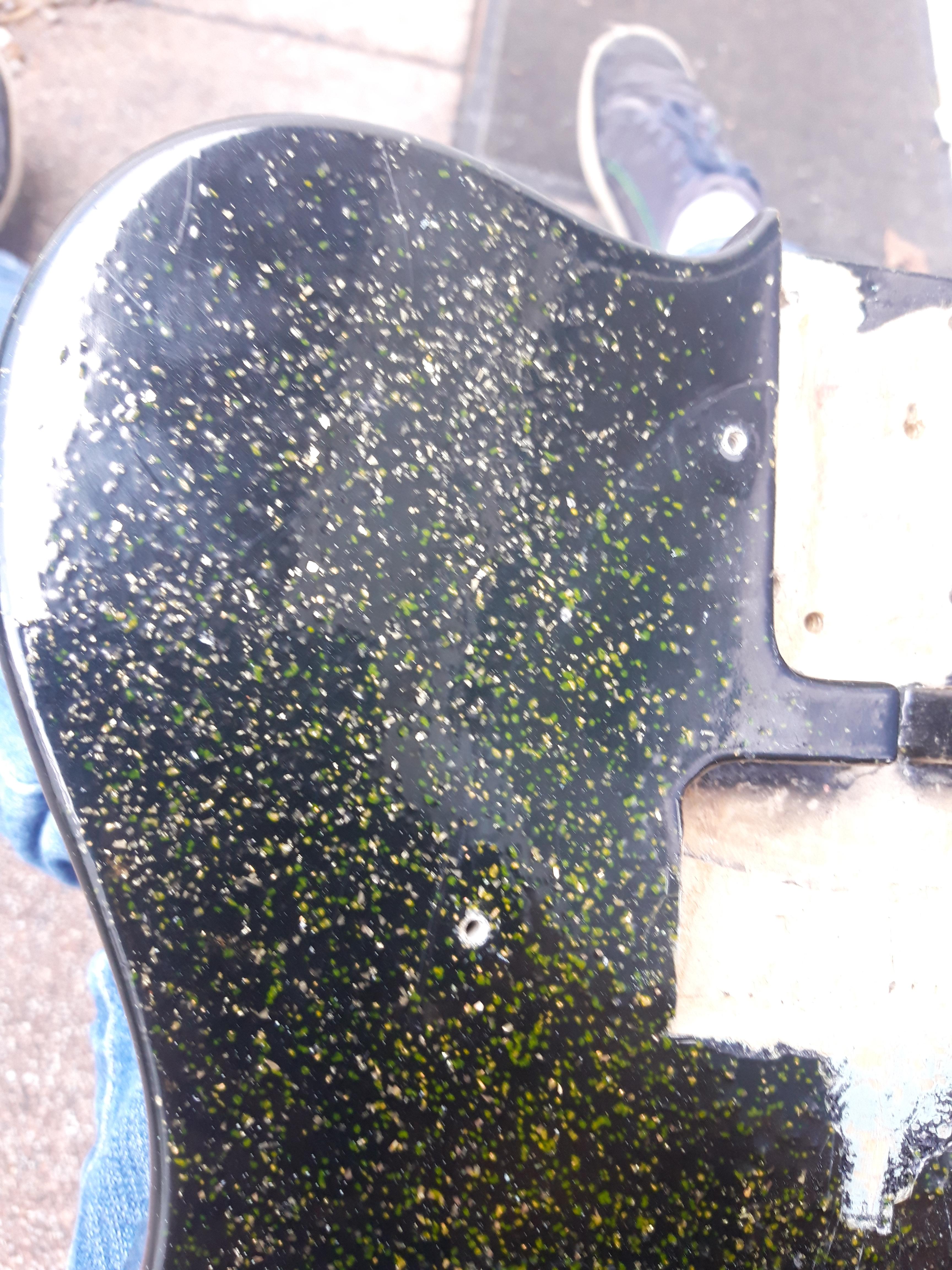 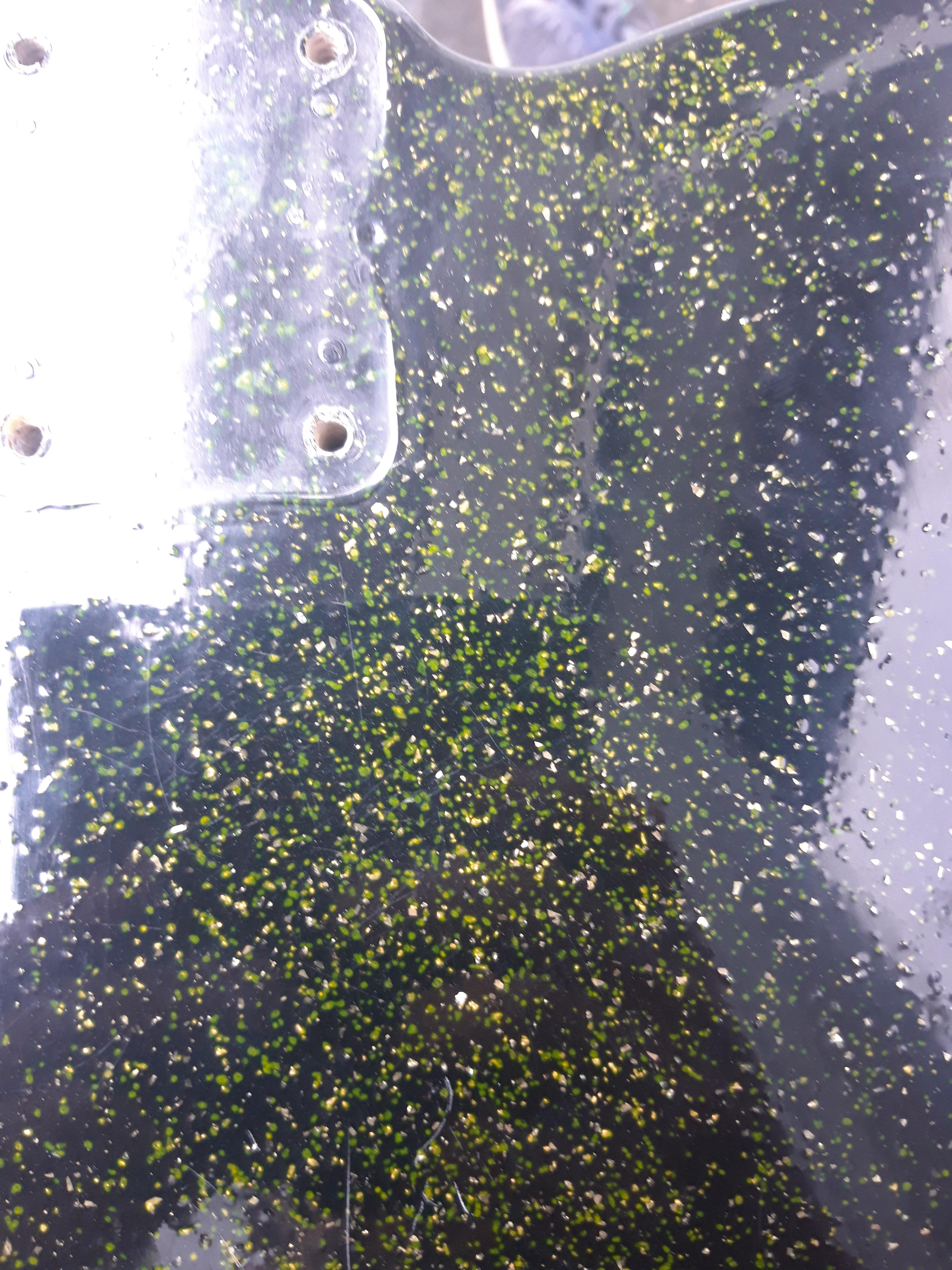 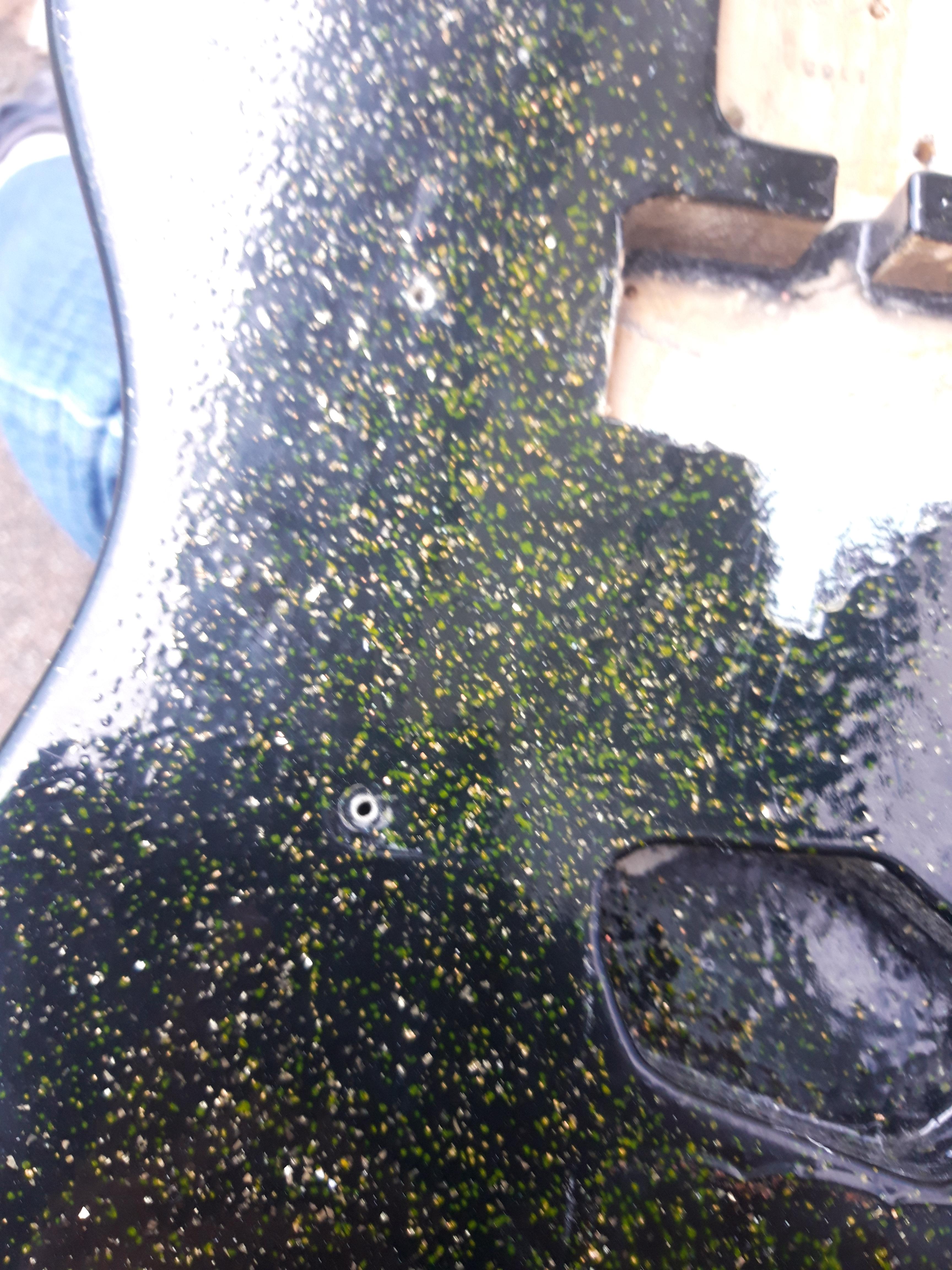 The seller sent me his original invoice and a picture of the guitar when it was in one piece. He bought it that way in 1984 in London, so the refin is quite old and it went early in this guitar's life. 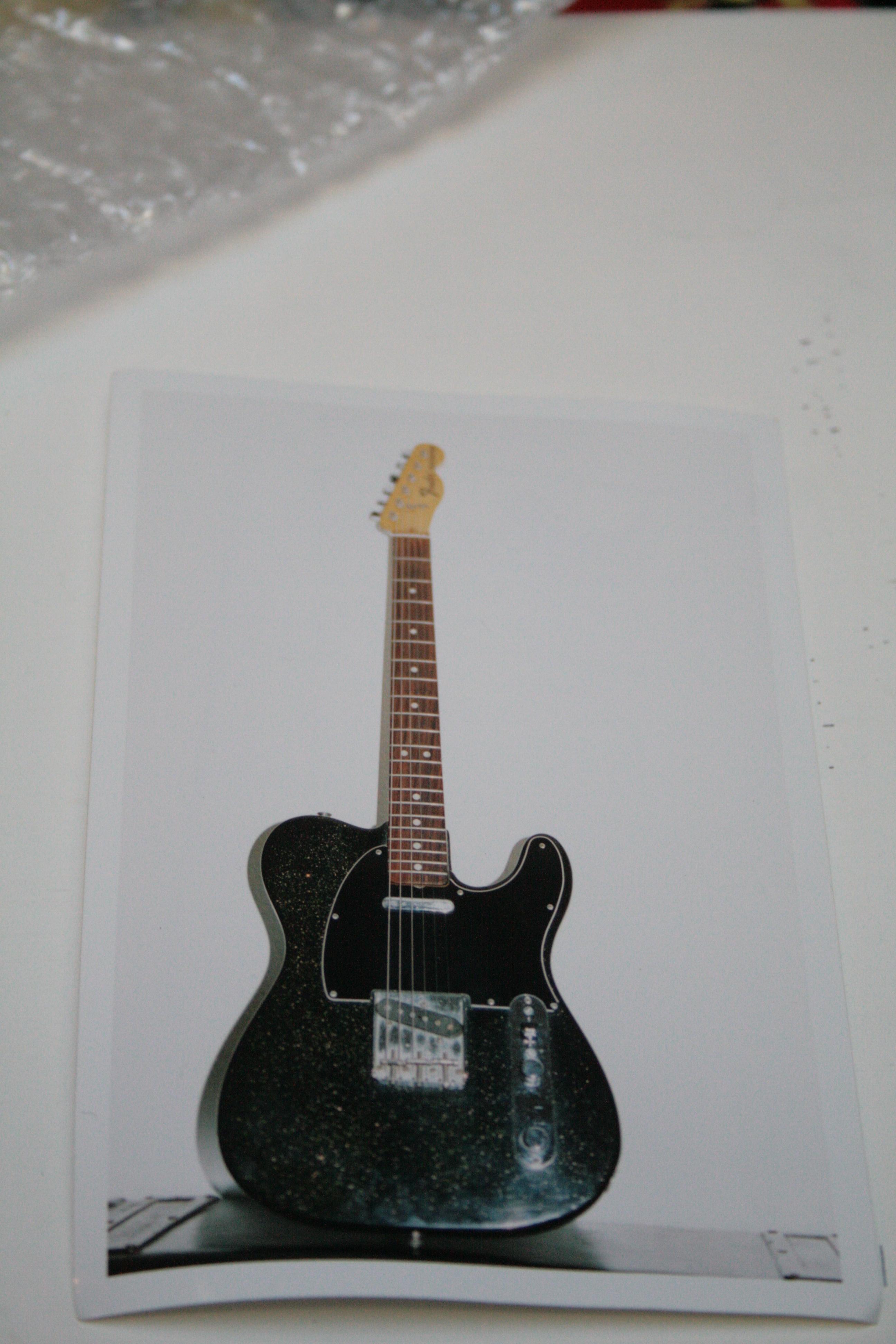 Anyway, I decided to remove everything...with a precision scalpel. It's a long and hard work but I like it. And the finish is very thick : 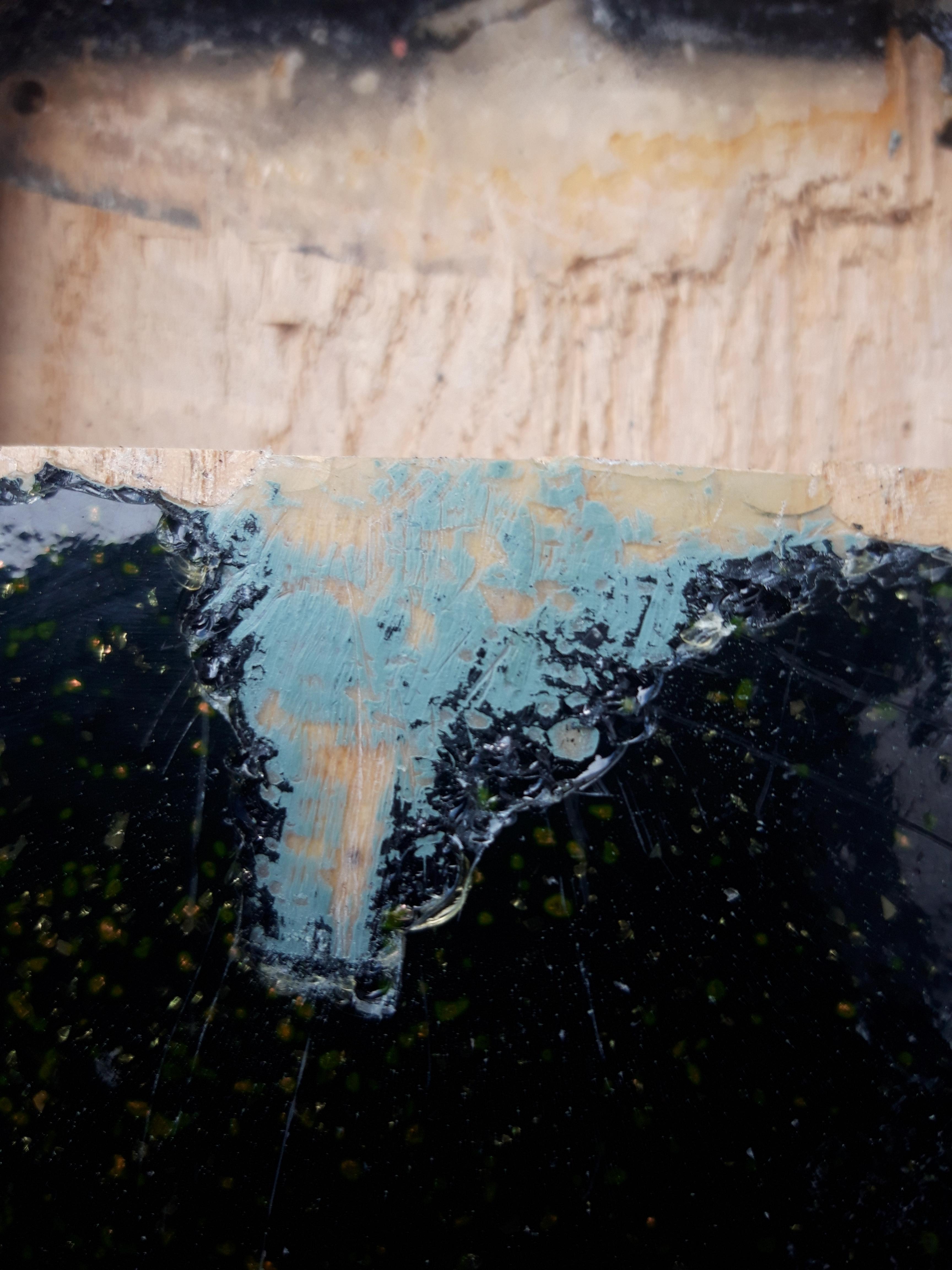 I thought it might be blue on OW under the black metal flake, but it is natural. With original clear coat under. Cool. 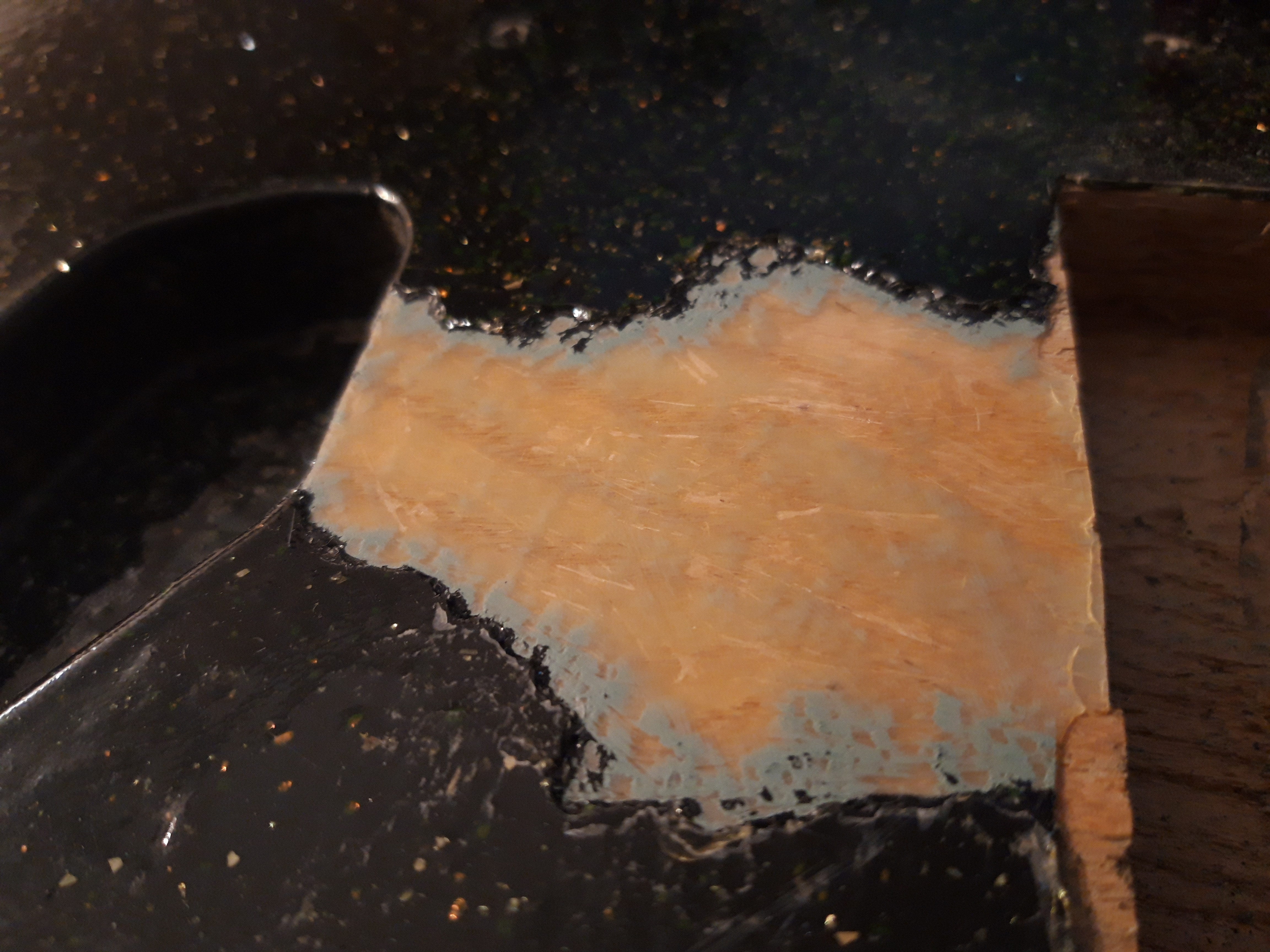 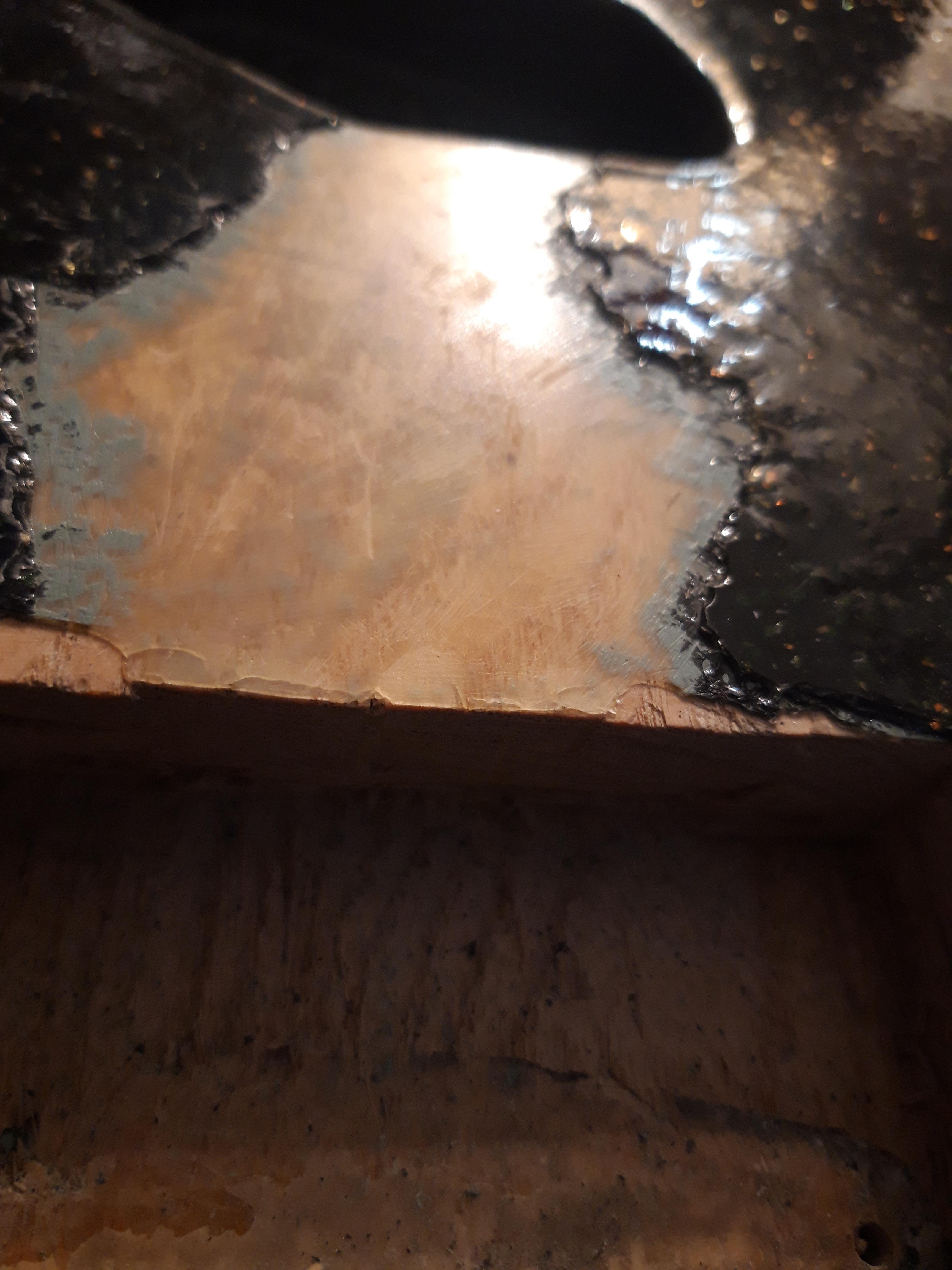 And I've decided to keep the edges of this finish to do something I think would be super cool and great looking : a black double bound natural tele body !
(Keep your mind open, it's a pretty rough job know). 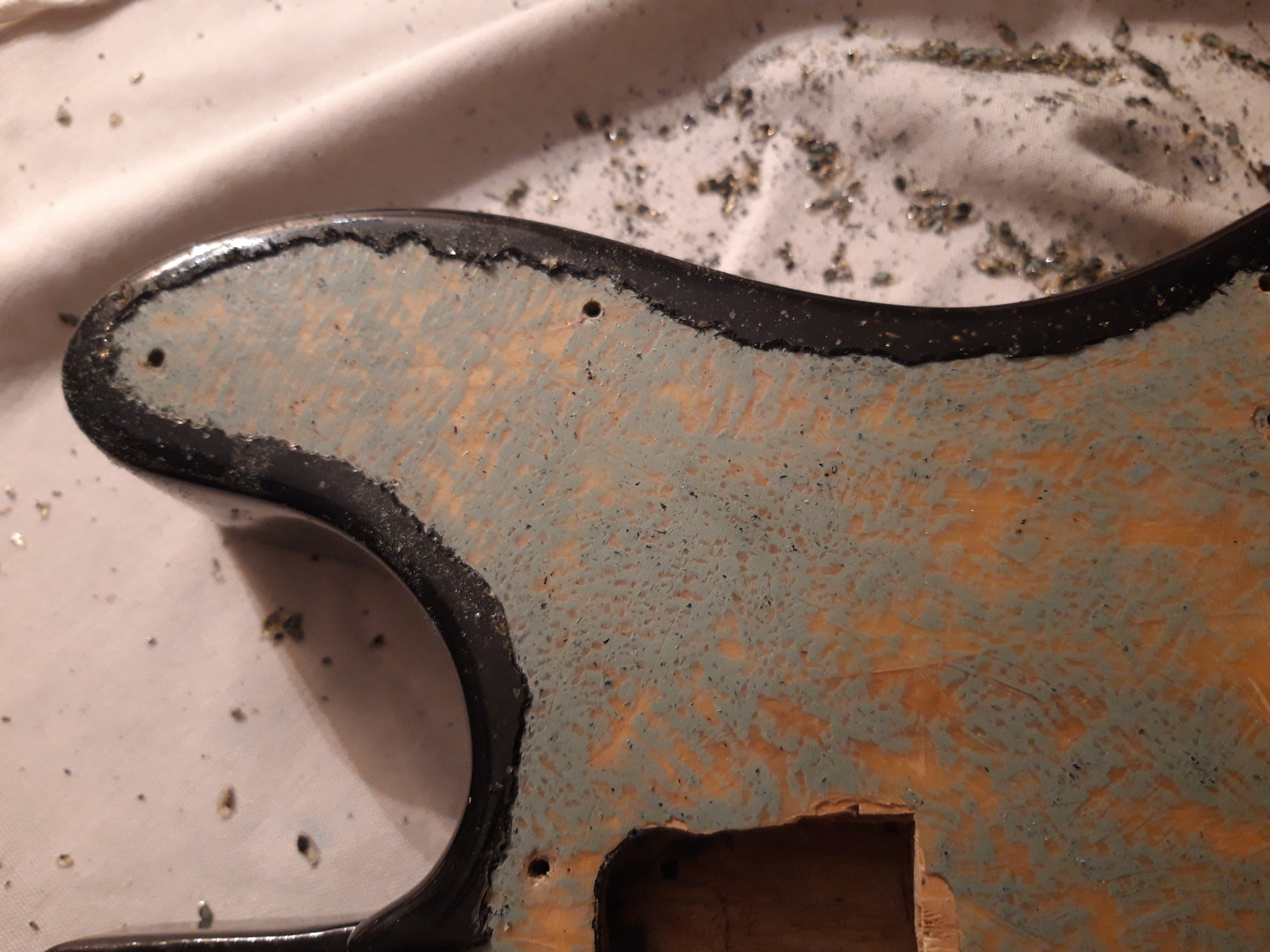 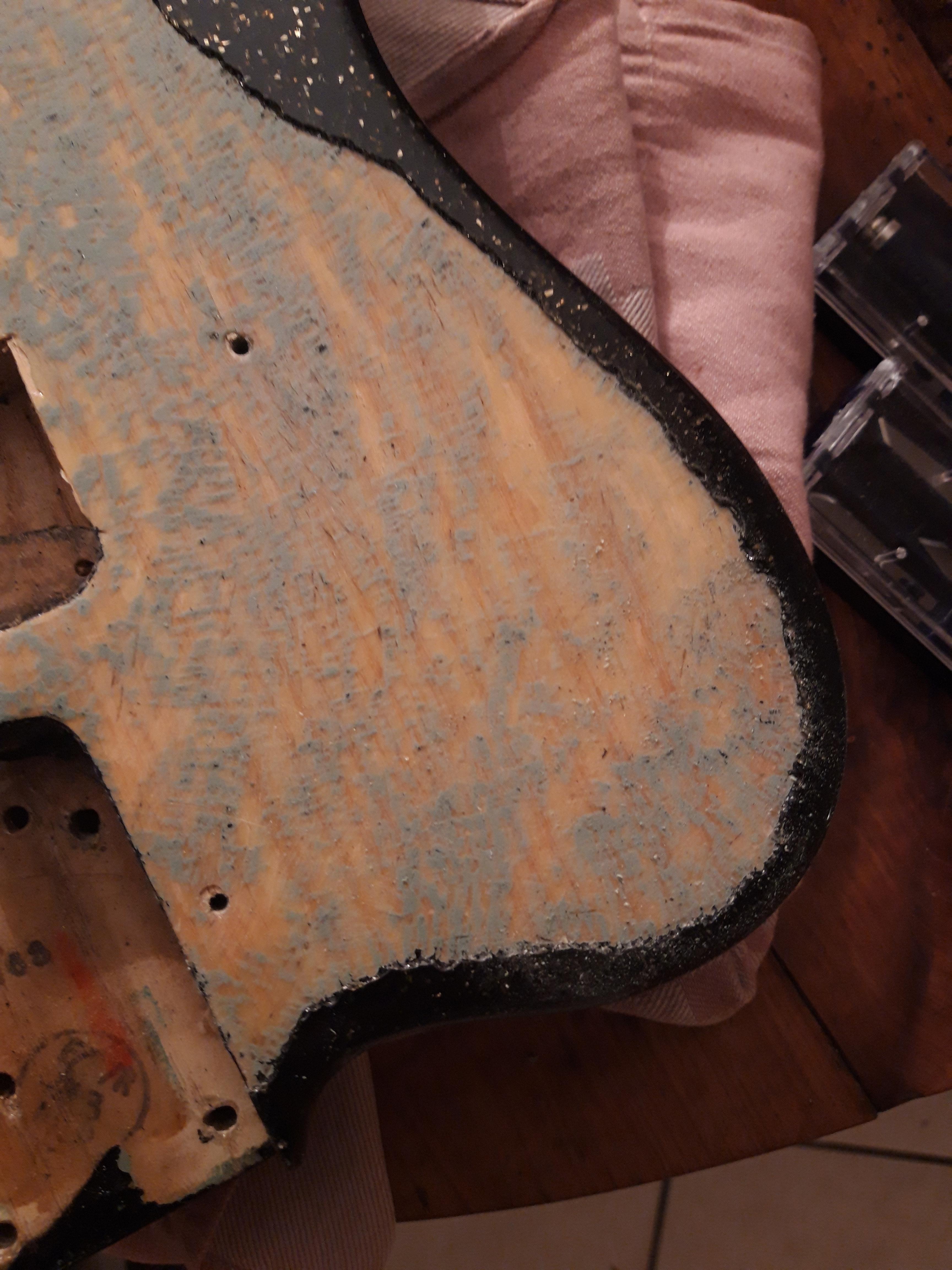 The idea is (if it's doable) to gently sand the super thick coat of black and flake finsih down to the thickness of the body. As the edges are rounded, I'll be able to keep some material and create bounds, right??
At least I'll try. 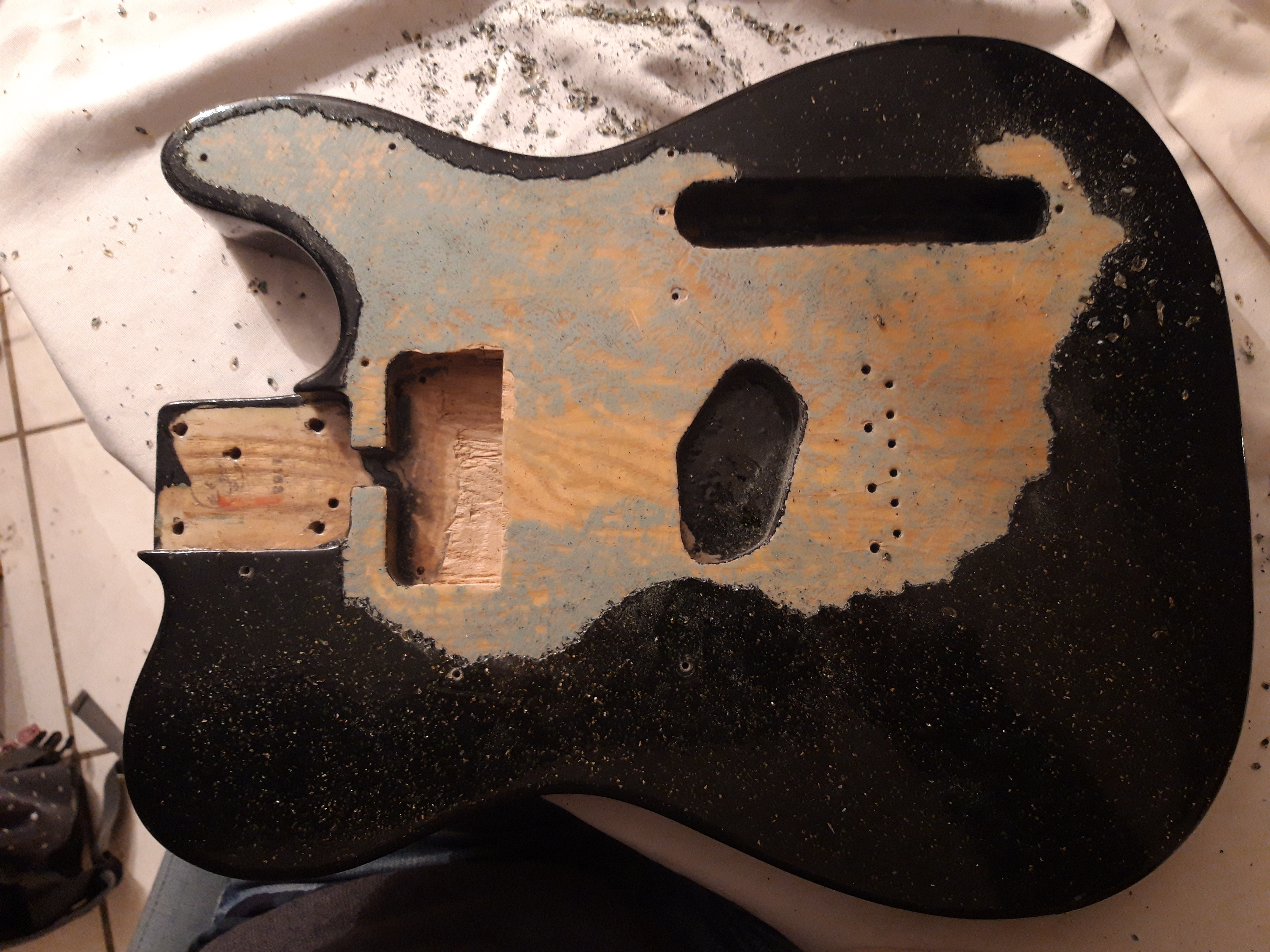 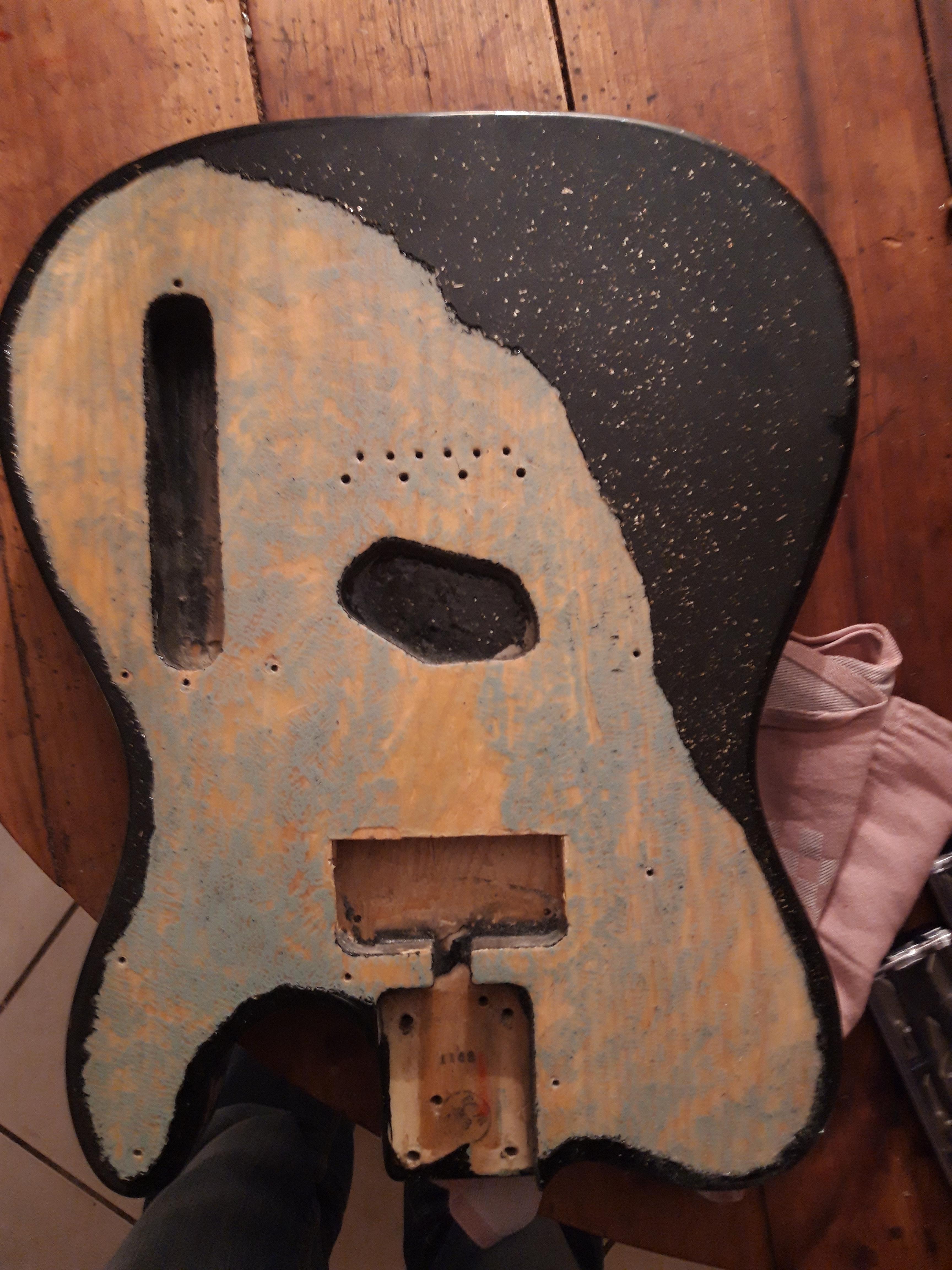 Here is where I am right now, the face is ready to work : 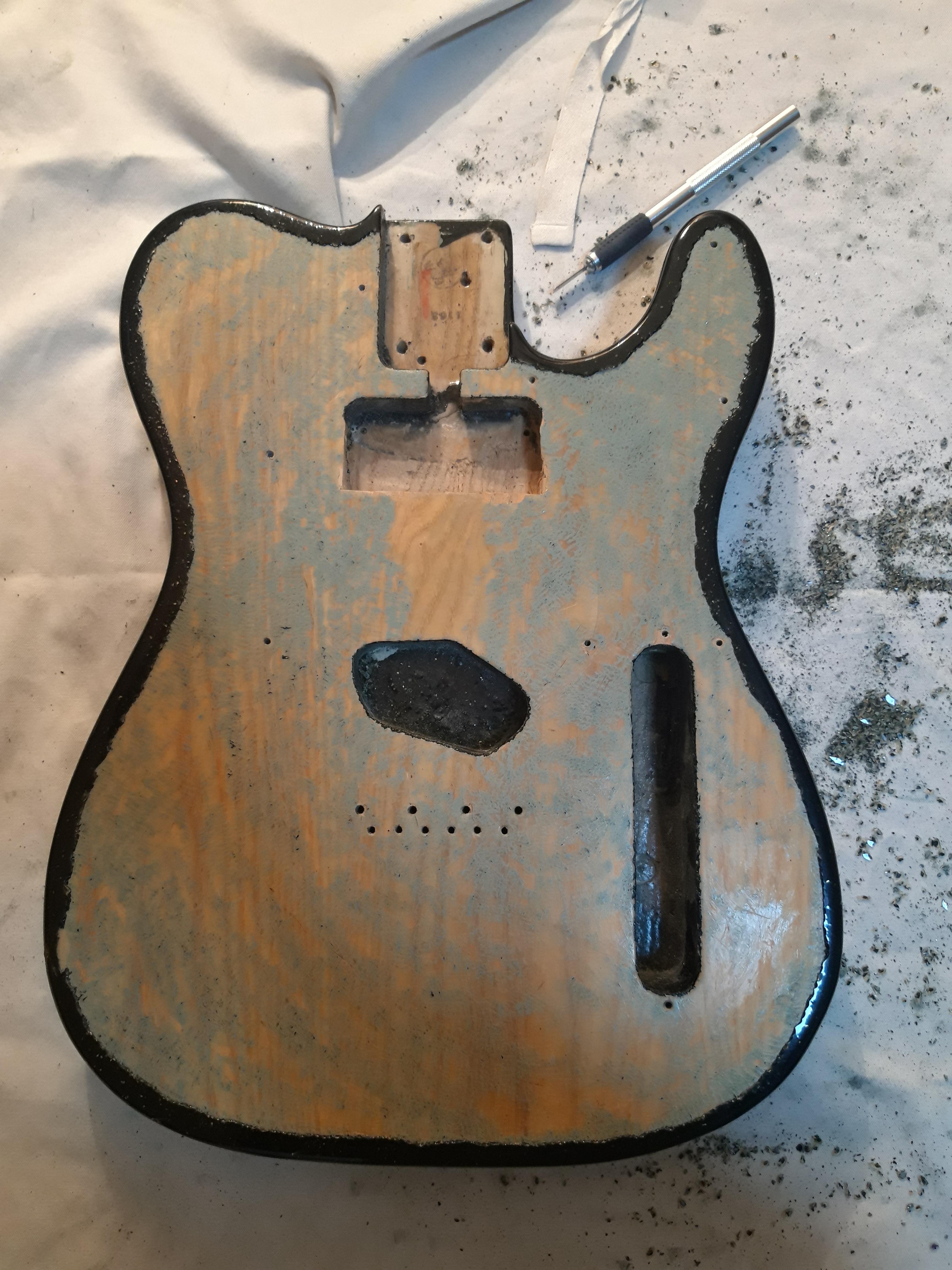 The seller also had a '77 bridge pickup, and I bought it as well at a great price.

Now I have to figure out what I want and need for the guitar, as I am a total noob in this telecaster world.
I know what neck I want and I know what will be done for the pickguard.
I saw a comment from Danocaster here on OSG saying Fender bridge plates are the best, no need to go Callaham or Glendale or anything else. So this is the path I will walk.
I think Rutters for the saddles, but I'm open to a change of mind, and have no idea regarding the neck pickup choice. Like no idea at all. It's like choosing an overdrive these days and be certain of this choice.

But I'm happy to be back with a project like this!
Top

Here is the pickup by the way : 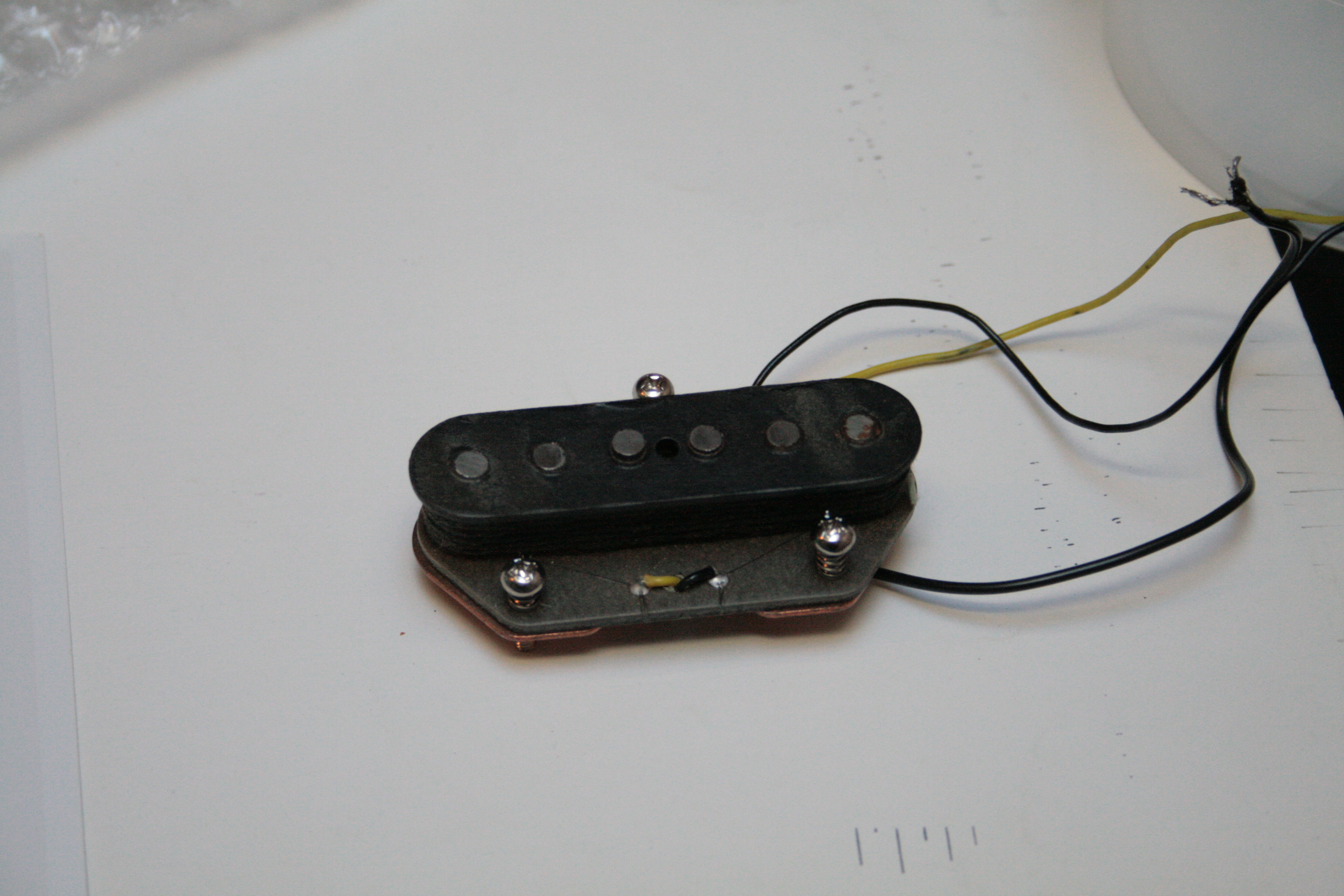 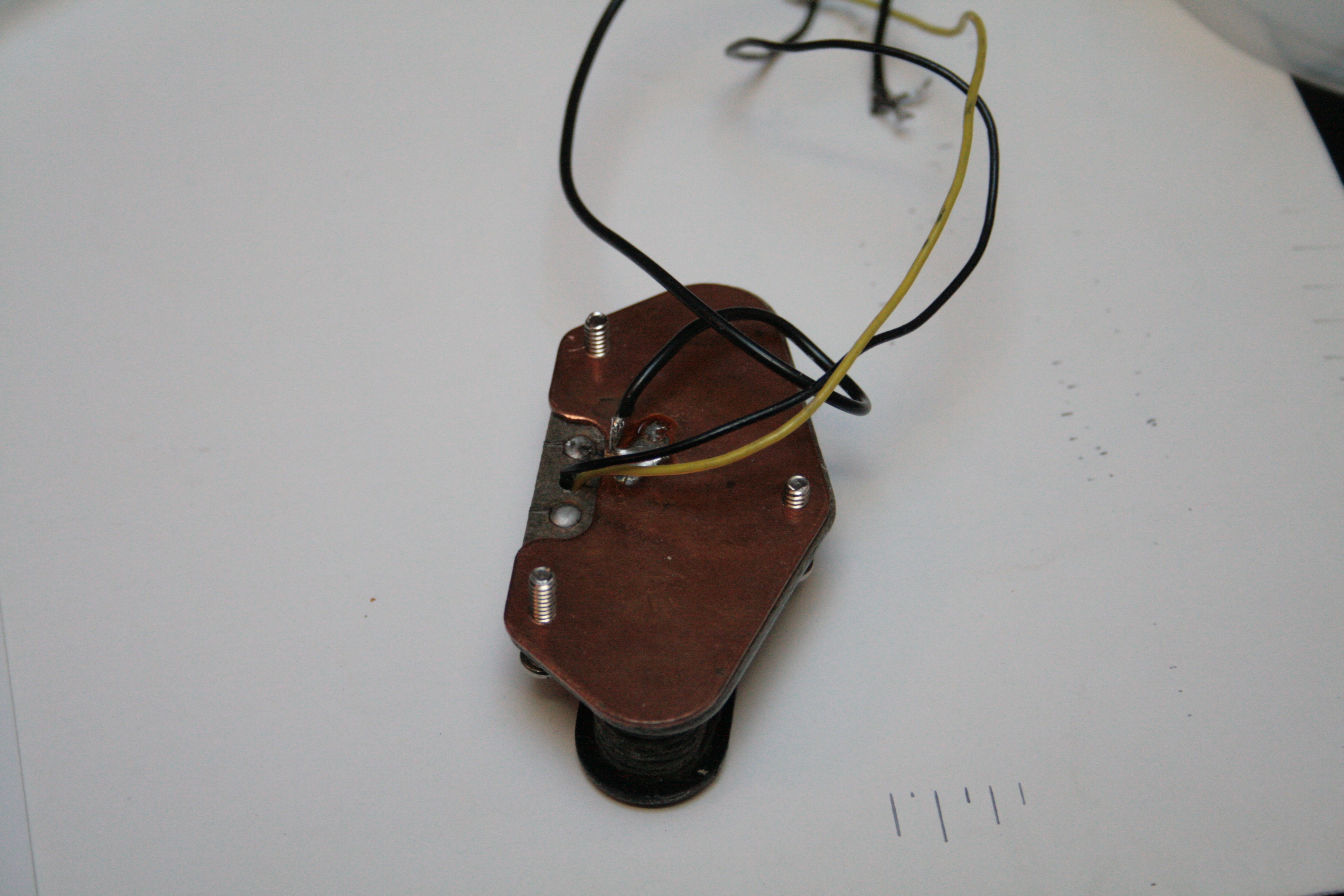 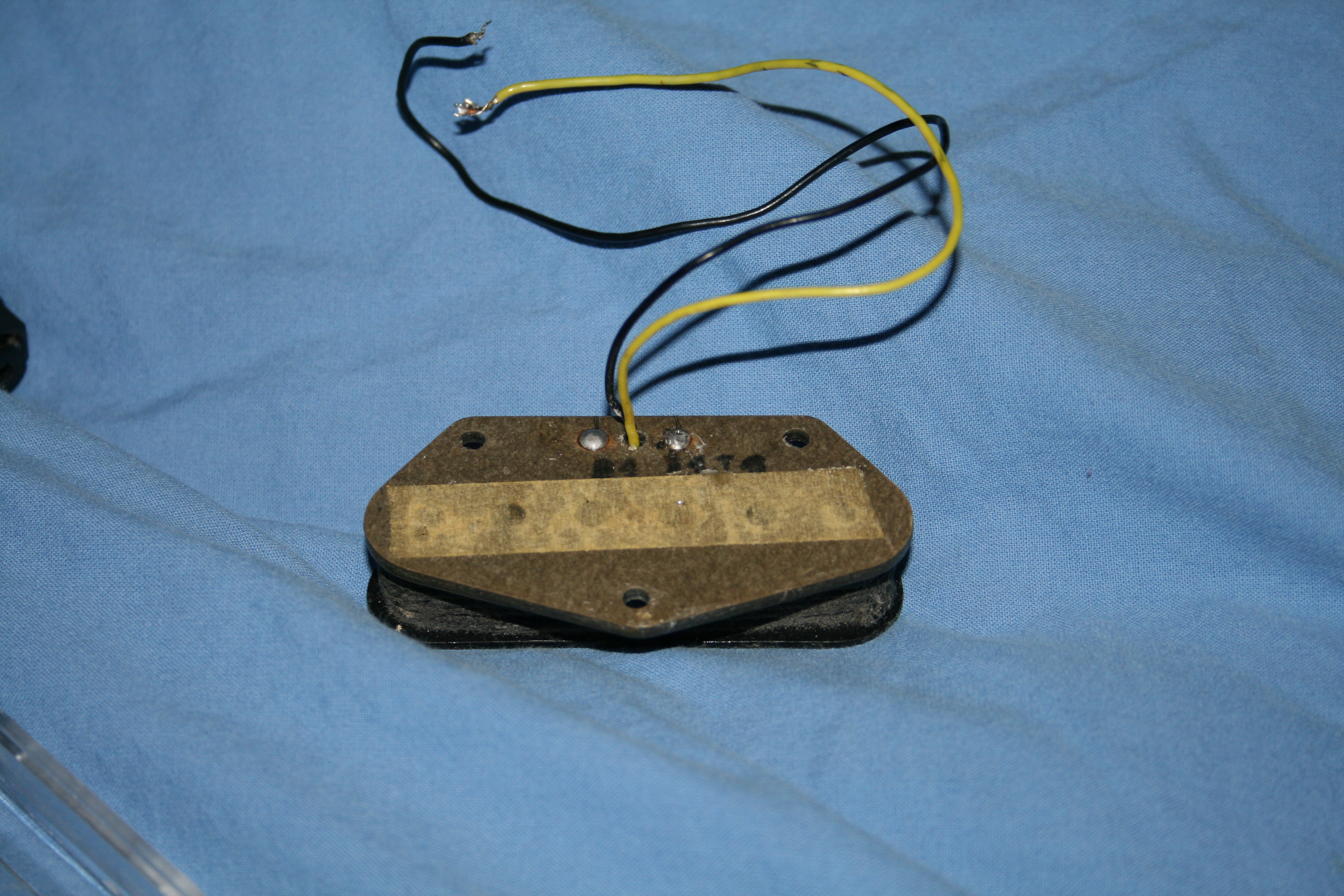 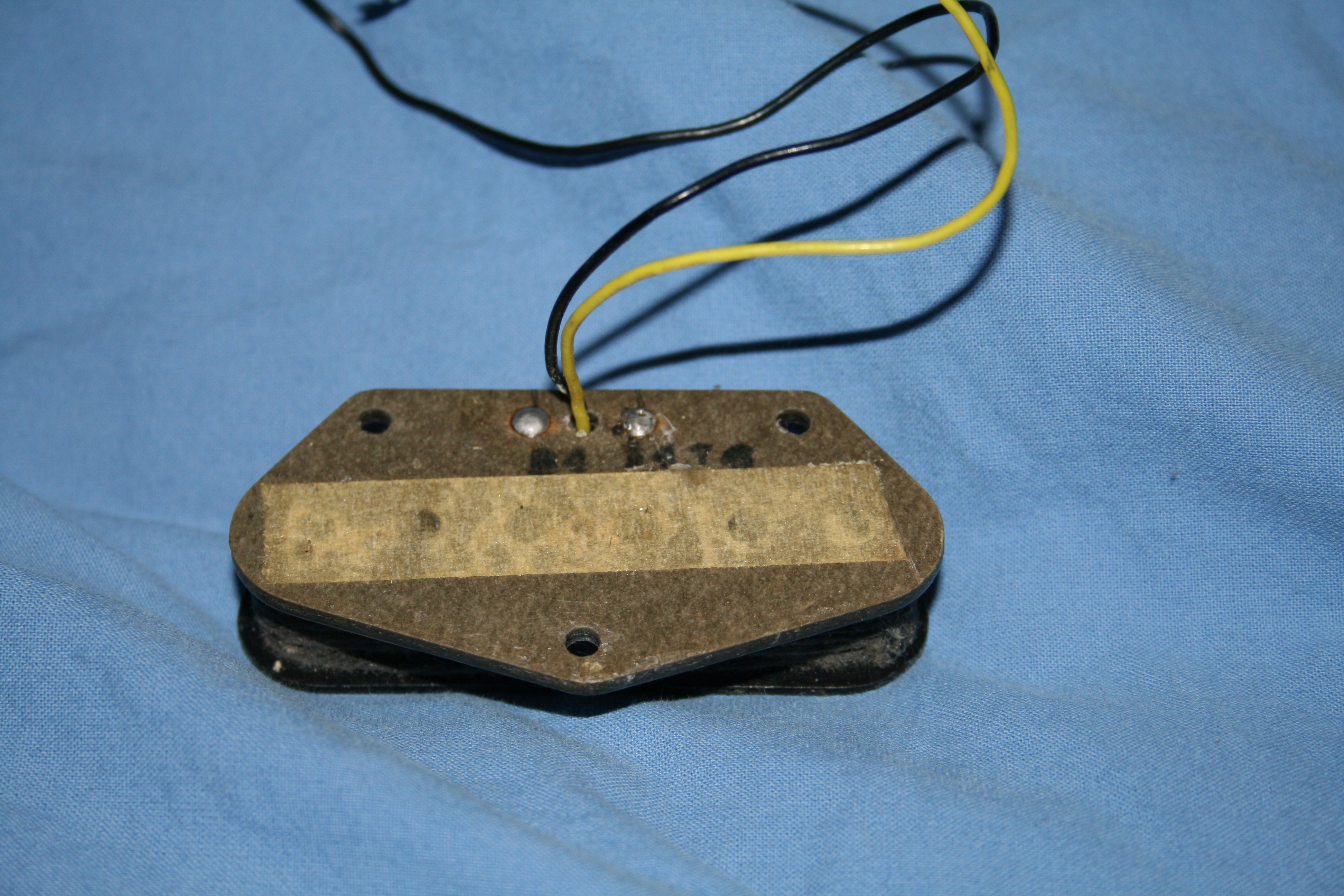 I got steel grooved saddles for my Tele, like JM bridge saddles. I like them, and I think the 70s era Teles weren't using brass. I just got Fender ones, along with the Fender bridge. I may eventually get glendales or something, but experimenting with cheap is good too.

As for neck pickup options. I got a very traditional A3 broadcaster set made. That pickup should probably be a lower output A5, if I understand the history of Fender Tele pickups correctly. I'd strongly consider getting a sense of how hot it is and then maybe, since your body is already routed for something bigger in the neck, going either JM, P90, or just PAF-style humbucker. Might be worth finding someone who can wind you something to match up well with the Tele bridge you have.

As for wiring schemes, depending on what pickup you put in there, there's tons of options. But the next Tele I do (and maybe the one I have, if I get adventurous) will probably end up with the Bill Lawrence 5-way scheme, b/c why the hell not? https://www.premierguitar.com/articles/ ... er-circuit
Top

This is going to be good.
Top

Last tele I did had the 5-way superswitch (if your cavity is deep enough) with the deaf eddie 5-tones ... stock 3 plus series and OOP. Someone should put that in an offset.

i owned a '78 for a while, i like the 70's pickups a lot.
mine had a 6-saddle bridge, which i think is correct for those years.
(Christopher, also)
I've been to one World's Fair, a picnic, and a rodeo, and that's the stupidest thing i ever heard come out a pair of headphones.
Top

I think I'll go standard for the electronic, as it is my first tele.
3 way selector is fine by me and I'll have a "normal" single coil neck pickup, eventhough I'm contemplating the idea of a single gold foil in the neck.
Hmmm.
If I don't come across a vintage one, I think I found the pickup I will use : Cavalier Pickups. The Lion King or the Wolf. He got excellent reviews. Tremendouses ones.
In the meantime I still have to find how hot is the pickup.

As for the bridge, 6 saddles are really better than 3 ?

And as for dating my guitar parts, I begin to strongly believe it's not '77 but '74. Which would be great, obviously. The more I read the stamp date, the more I definitly think I read '74. And trust me I try to be super objective about it.
And I did some research on the internet about the "gap" in the neck heel cavity of my actual tele body (I hope you see what I mean) : I see it on '74 bodies and never on '77s.

Anyway,
I ordered the parts I needed for the pickguard, they'll arrive soon. I hope it will work, and the overall look will also depend of the success of my double bound idea !
Top

Oh I remember that one, was a great thread and great restore. I'm going to read it again

I did the same, yeah, for much the same reason. There's a fair bit of good data on the typical pickup values, etc, of teles of various vintages. I wish I could remember where I found it exactly, but it's out there.

I can't speak from experience there. I have the stamped cheap one that Fender sells. Danocaster loves them and claims they're the best Tele bridges if you want the Tele sound. I like mine for sure. It's 3 saddle though.

Man raph this is gonna turn out so amazing... like all your other projects before!!!

Thanks Pat!!
I hope it will, I have a precise idea, I wish it will work!!!

And pics to come soon

And now I am waiting for the clear pickguard I ordered...because I received this : 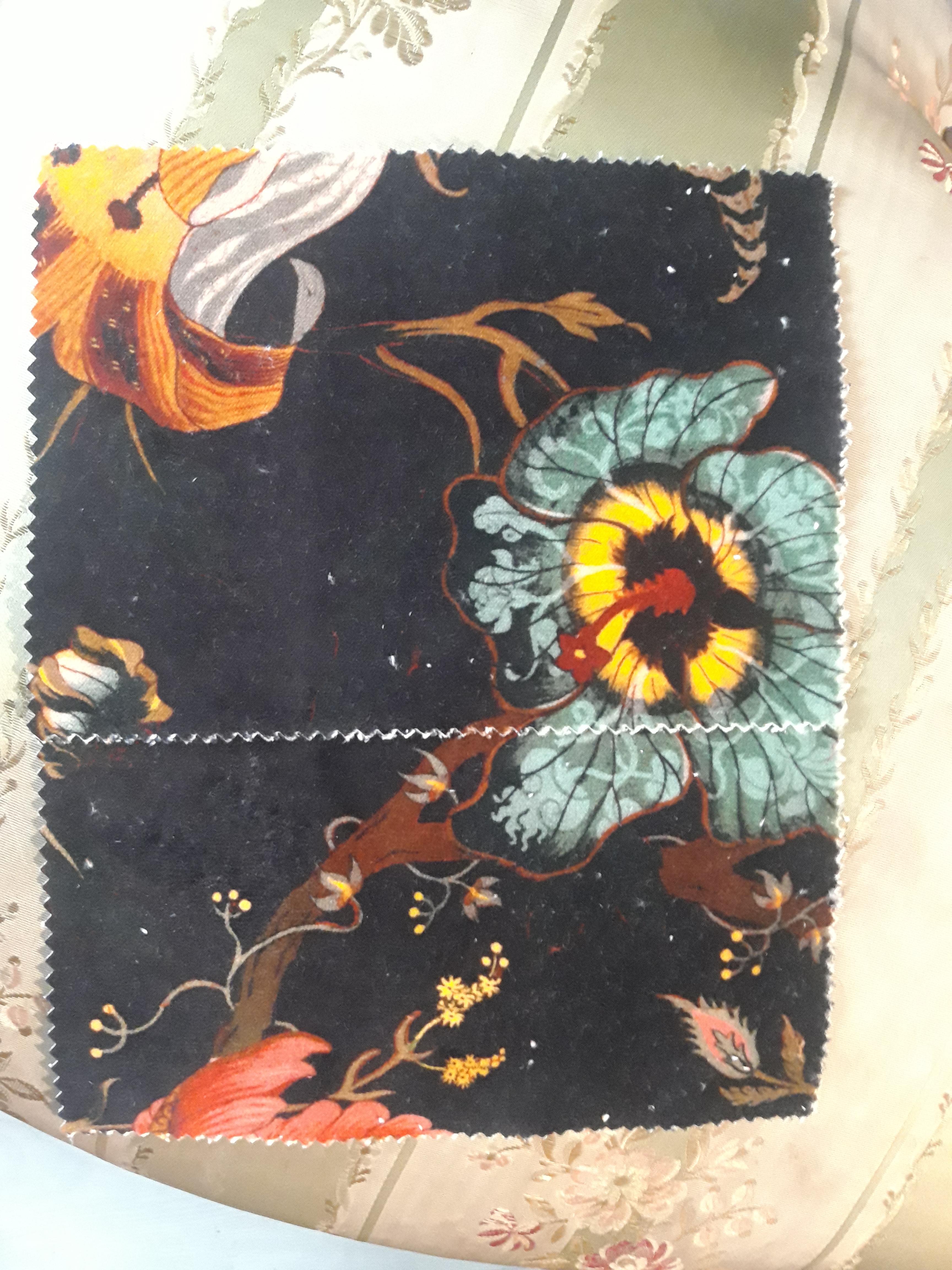 !!
I am happy and a bit disappointed at the same time.
While working on my house, I am constantly looking at material and paint. I found a brand who does incredible materials and wallpapers. I had the idea of ordering a sample of a black velvet piece of material in order to see if it could be cool under the clear pickguard.
I also had the idea of ordering two, which was a good move because the samples are small...while the flower pattern is very big.
If I go that way, I'll have to use the two samples...and have a line in the middle.

They also sent me this : 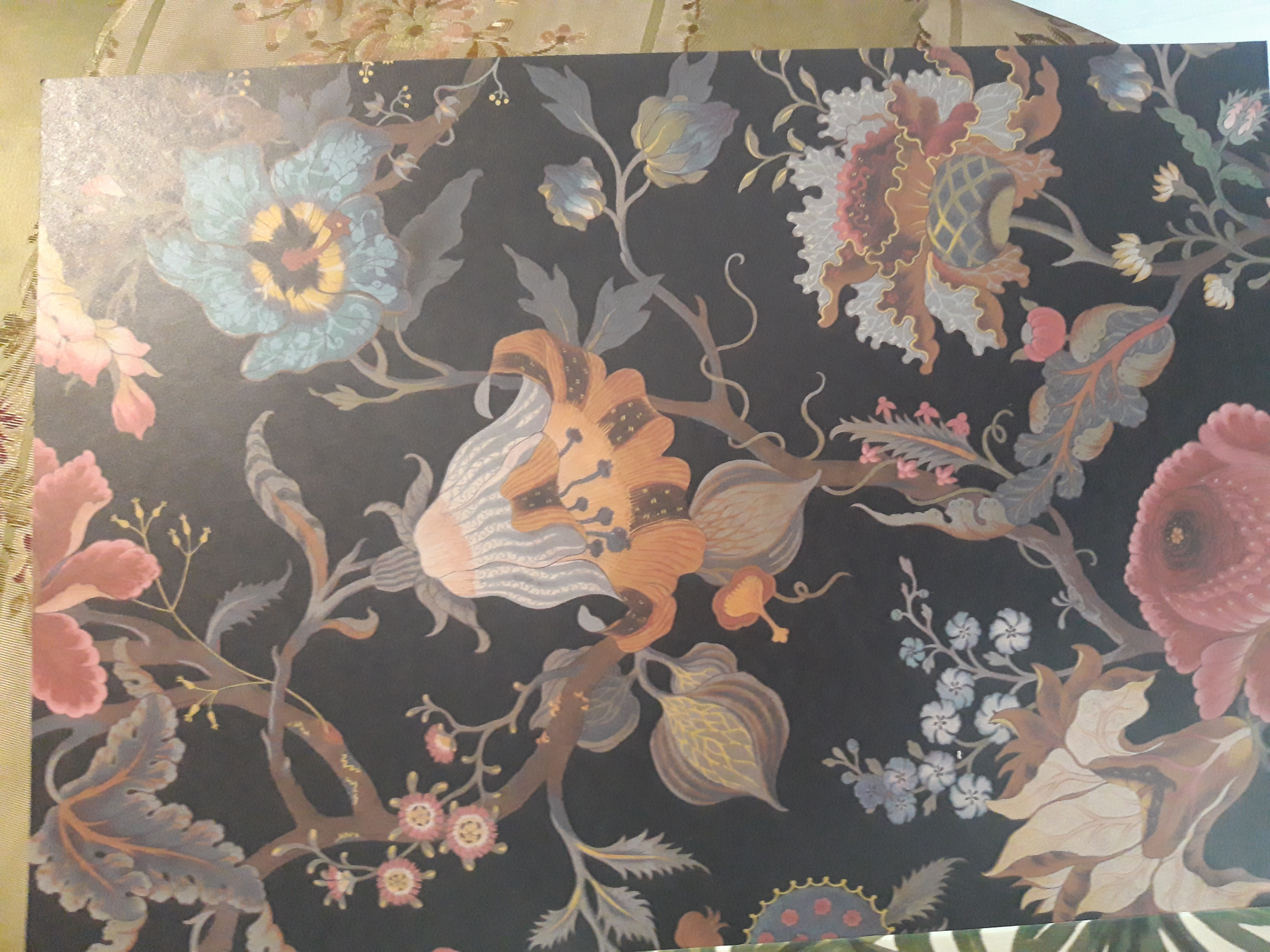 The pattern on thick paper.
I might also use this, as the pattern is way smaller. But the black is not very deep. And I don't know how the paper would react with the glue.

Anyway,
It is still a nice thing to think about