Bringing your older offset back to life.
Post Reply
16 posts

Inspired by the stellar guitarchaeology chronicled in sleepkid's OSG thread and Mory Madness blog post, as well as MatthewK's stunning Mory Jazzmaster resto, a few years ago I set out to rectify the conspicuous absence of a Jazzmaster in my guitar quiver by finding my own Mory. I was captivated by the story of Moridaira Toshio's handmade JM copies, and being too broke/cheap to buy an old Fender, I figured a Mory could be my ticket to vintage JM ownership while coming in comfortably short of the $4k pricetag a vintage Fender JM commands.

Not having the energy to try to arrange a purchase through Japanese Yahoo auctions (where these seem to pop up with the most regularity), I stalked eBay and Reverb listings for about a year until back in 2017 I found a Mory JM body, complete with many of its most essential original parts (trem with arm, pickups, pickguard with most of the original wiring), but missing a neck, knobs, rhythm circuit bracket, bridge, and a few other bits and pieces. Not bad! The body, however, was covered in a thick, nasty (latex?) refin, was clearly pretty substantially oversanded, and had a large crack in the treble cutaway. Given the later, more Fenderish tailpiece (rather than the doorhinge style on the earlier Morys), my best guess is that this one dates back to sometime between late '65 and '67.

For the past two years, I've been working at a snail's pace to breathe some new life into this thing, and after much stripping, sanding, filling, clamping, soldering, and neck finishing, at long last I'm finally about ready for paint and assembly. Over the next couple weeks, I'll slowly post my documentation of the restoration process, with all its ups and downs, with a focus on some of the unique quirks and features of these guitars sprinkled in along the way.

To get things started, here are a few photos of the body as I received it:

Not looking so bad here... 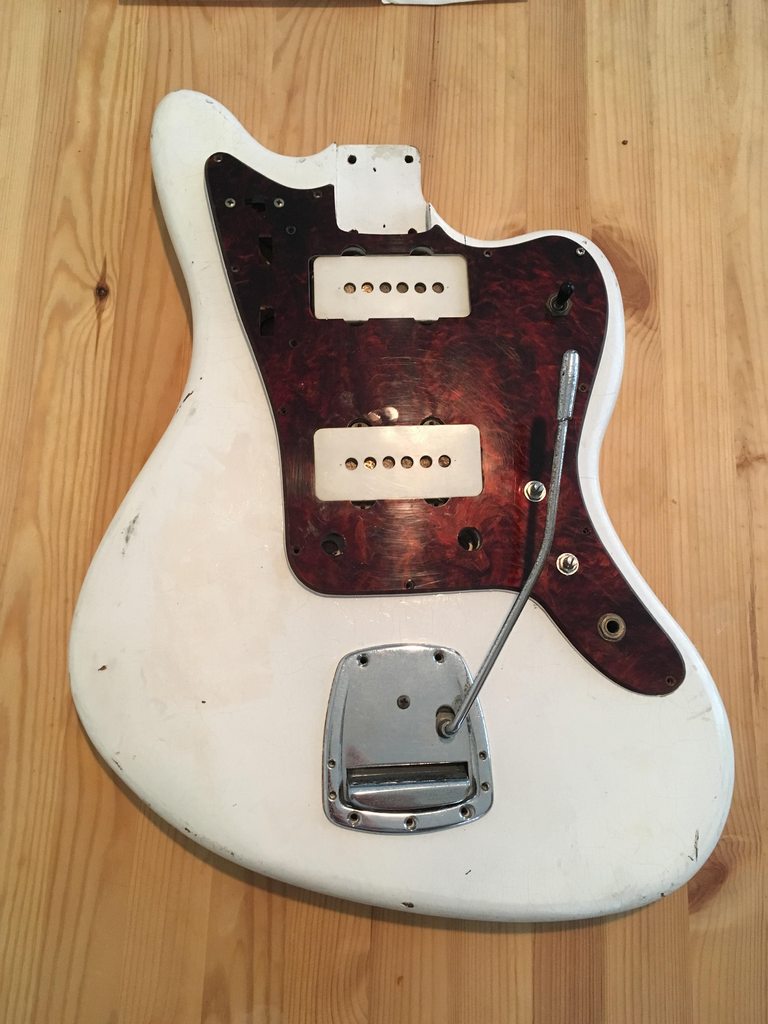 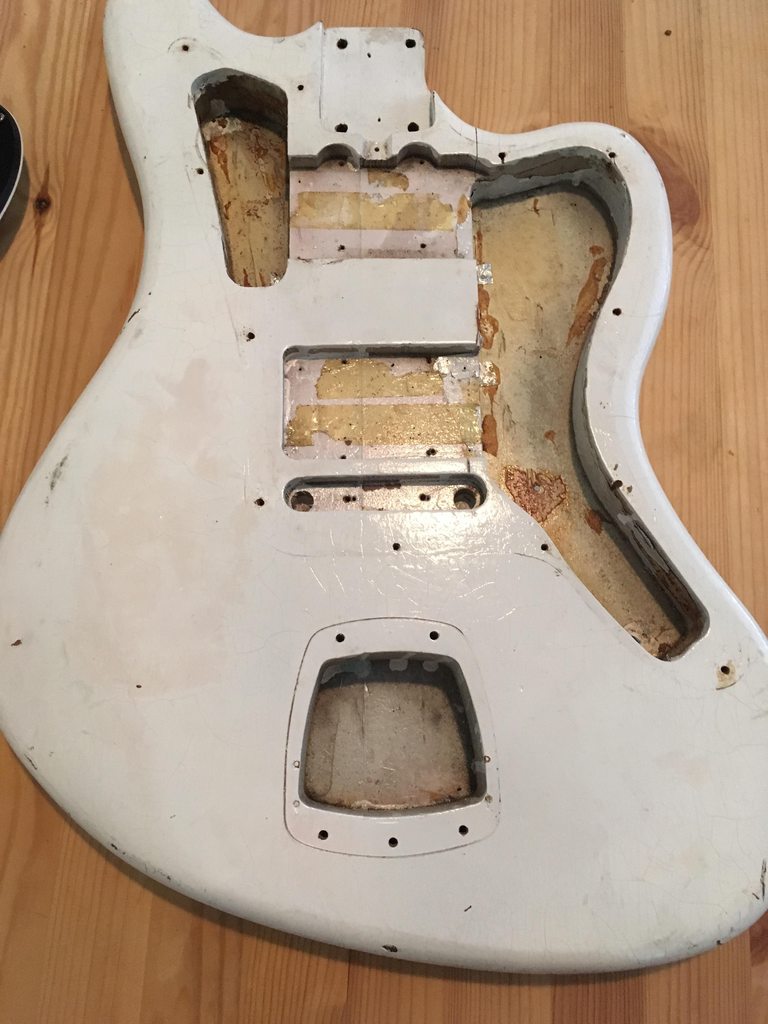 Original shielding foil, covered in paint and peeling off: 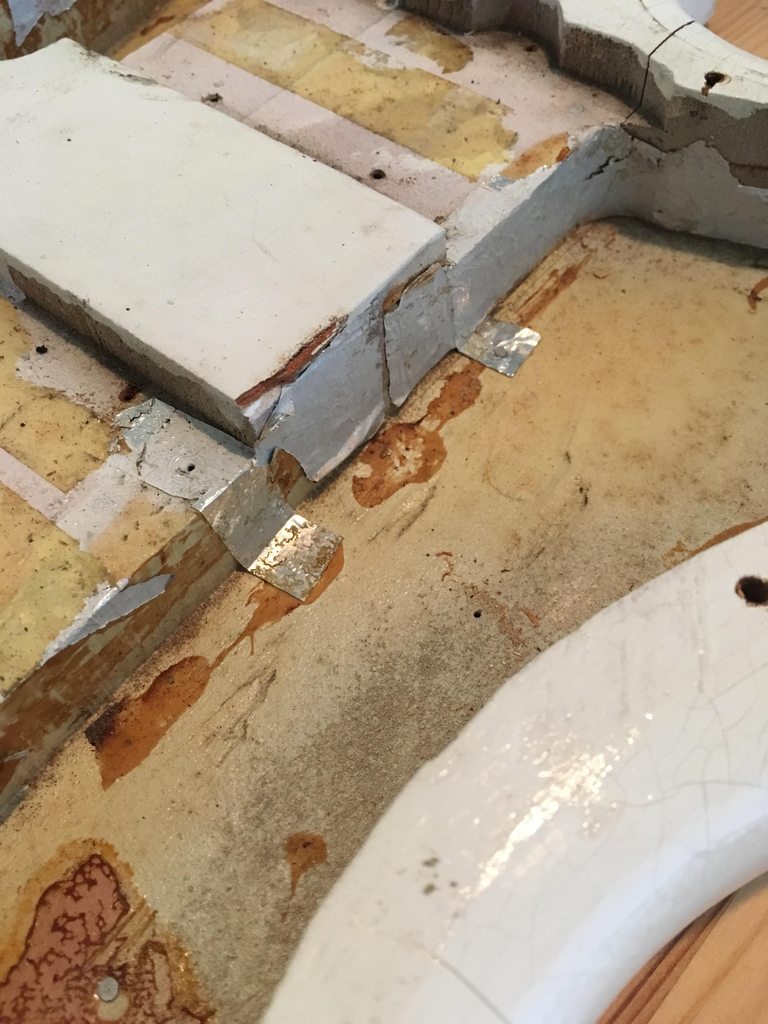 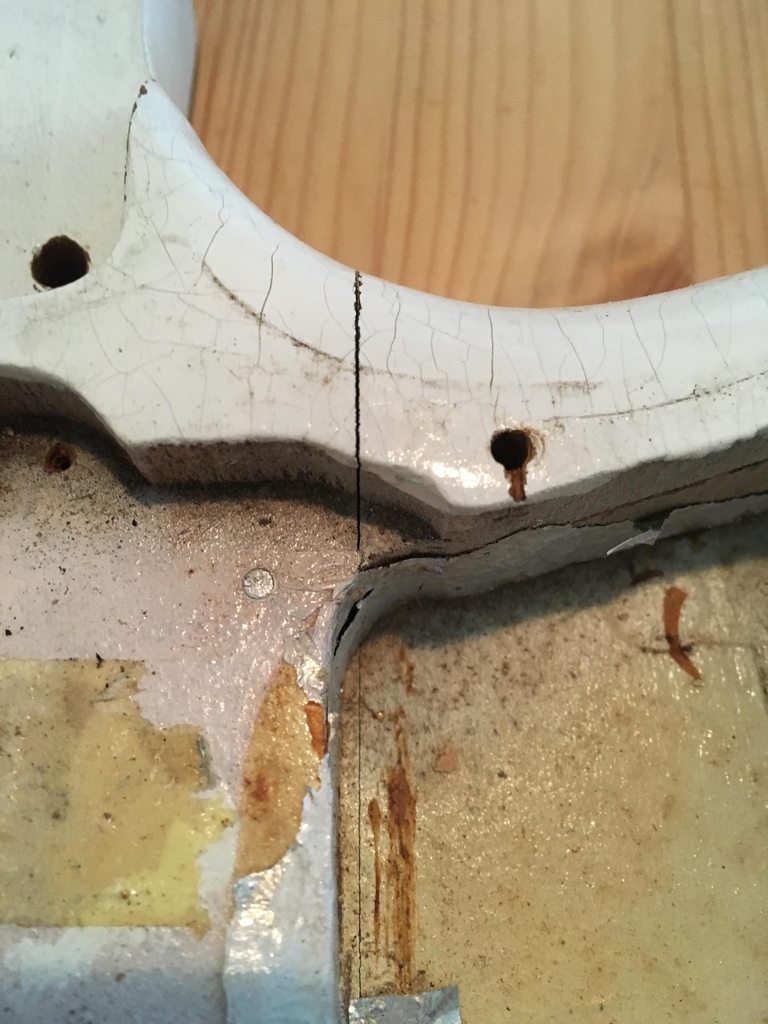 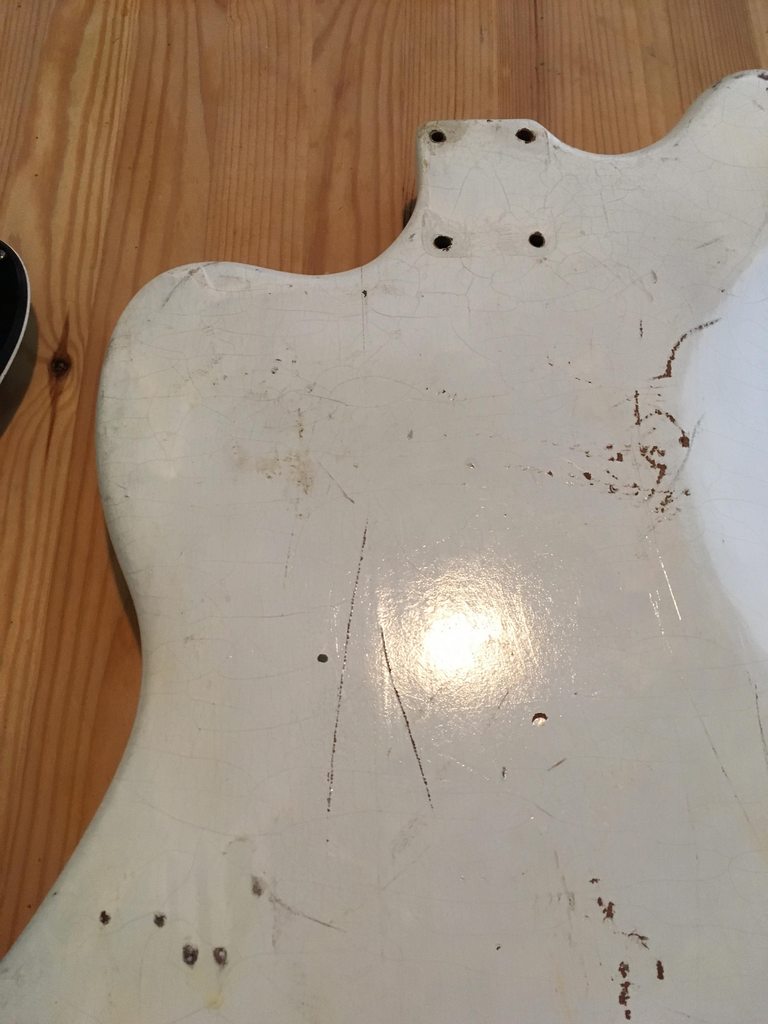 Regarding the final finish, I originally wanted to paint the guitar in a color it would have come in from Mr. Toshio's workshop: it seems these originally came in a Dakota-ish red, sunburst, pearl white, and perhaps black.

I already have a few cans of Reranch Dakota Red kicking around the garage and was planning on just falling into that direction, but the Olympic White-ish refin the guitar had when I received it had really been growing on me lately. I also have half a mind to go in a more vintage incorrect direction and go for Firemist Gold (inspired in part by MatthewK's awesome refin work in his own Mory resto thread) or perhaps Rosewood Metallic, a Porsche color I had slated for a Jaguar project a while back.

I'm at an impasse on color choice, so curious to hear what the good folks of OSG's thoughts are, hence the poll above!
Top

I think that pickguard needs a vintage white - the brown on gold is wearing a bit thin on me, although a proper Shoreline gold might pick it up some.
Hit me up for a decal when the time comes - and if you need any aspects of the weird-ass wiring checked ...
Top

Dakota red BUT with a creme/mint guard!!!

Rosewood Metallic, with tort. Because I've wanted a 911SC in that color foe AGES!
“Now I am quietly waiting for/ the catastrophe of my personality/ to seem beautiful again.”- Frank O'Hara
I am not an attorney and this post is for entertainment purposes only. Please consult a licensed attorney in your state for legal advice.
Top

Good colour, when I had my Super Super Carrera I was close to going down the road marked 'Another Brown World' but I found a good blue Pascha interior and that led me down the road marked Hellblau.. Funnily I am in the middle (only paid a deposit/first payment) of buying a much, much older 911 in a shade on the brown side which is for all intents and purposes my 'dream' forever 911. Only need to find the rest of the money and the restoration costs.

^^^ Ive said it before, but my dad's SC was both brown and a lovely car. Woody/forest shades suit them. Probably why the first one was Irish green. The new one is pre impact i assume?

Cool guitar. I like white, but that may be because my JM is white and it reminds me a little of it
Top

Aye it's the one I mentioned, the widow let me pay her a deposit based on what I could afford and me getting very good money for the other two 'lesser' cars and some extremely nice parts she had lying around and I'm going to drip it up once a few things I've bought and sold get paid for and my friend pays me the final profit on the Range Rover I'm doing up for her. A lot of hassle and it's a bad time to be doing it but I couldn't bear this one getting away and ending up in the hands of a speculator and the Lady Boss felt that since I'd given up a 69' S for a house it was only fair I got a crack at this now the hoose it paid off.

Maggieo, shadowplay, and NickD: count me an observing member of the Cloaked Cult of the Brown 911. A former neighbor had a Rosewood SC that still prowls my dreams.

I’m leaning toward keeping it simple with white—the pickguards on these (apparently made by a Japanese celluloid soap box maker) are really something to behold, and like MatthewK alluded to, I’d hate to distract with a more garish paint color.

Huge thanks; I’ll hit you with a PM in the near future!
Top

Gold with that tort would kill
Top

I thought I recognized that body!

I'm glad that it ended up with you. Those pickguards are really special to behold and I think you are right in keeping the color something simple. Can't wait to see how it turns out! Please make lots of posts with plenty of pics.
Top

I'm glad that it ended up with you. Those pickguards are really special to behold and I think you are right in keeping the color something simple. Can't wait to see how it turns out! Please make lots of posts with plenty of pics.

Small world! I recall reading your eBay username back then and thinking it I had seen it somewhere else before...and for an obscure offset with a micro-cult following, where else but OSG!? I’ll hopefully get an update post in this weekend, but paint will have to hold off a while longer while I wait out the 70-90% humidity we’ve had here the past few weeks. Really looking forward to getting the thing playing.
Top

After a long stint in suspended animation, working from home has given me the opportunity to finally make some headway on this project. 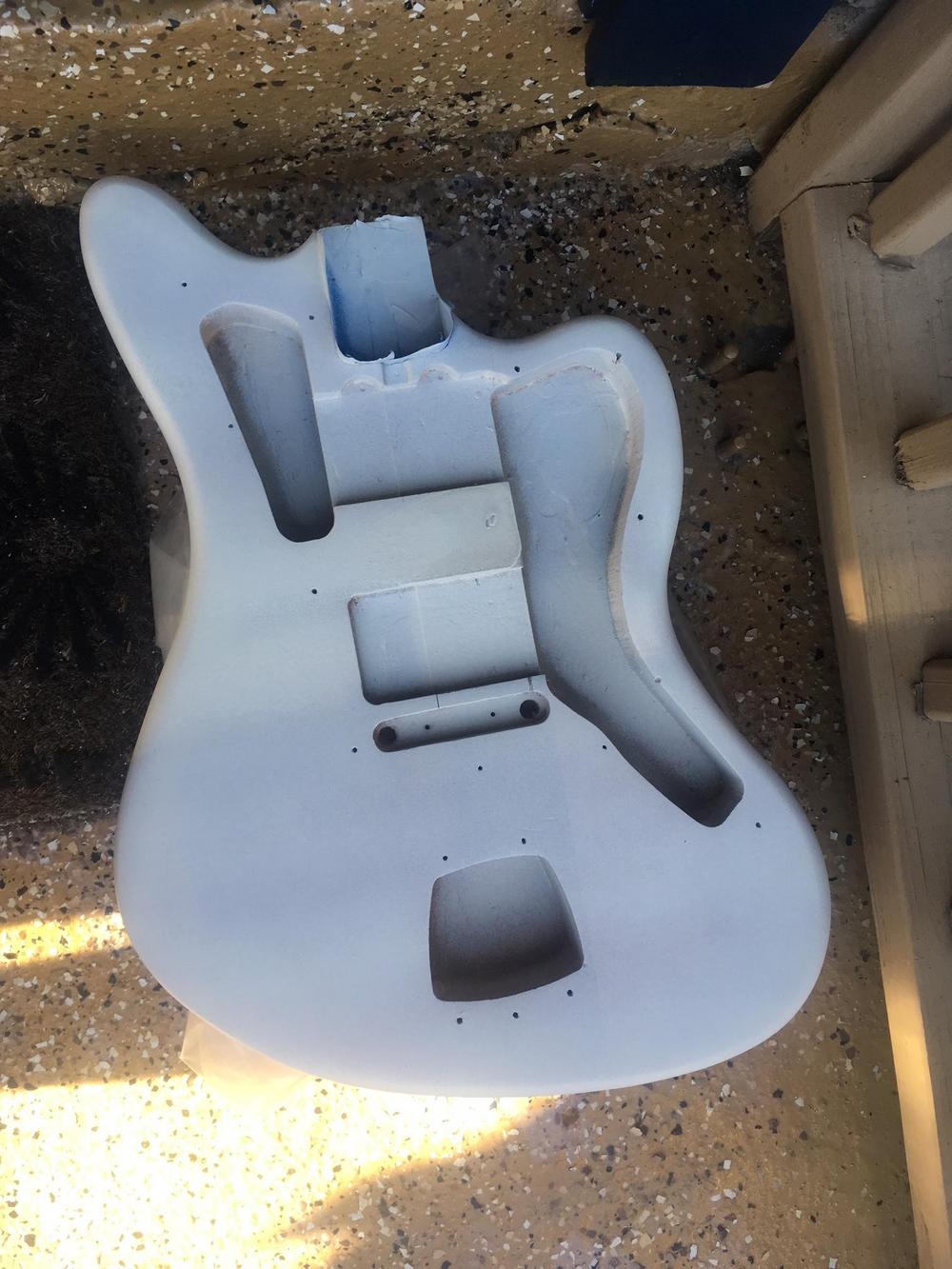 The body's now stripped, sanded, and looking pretty in its first coat of porcelain primer. After doffing the gobs of gummy paint originally on the body, I discovered that during one of this poor guitar's prior refins someone had overzealously sanded down the treble side of the neck pocket, requiring several rounds of epoxy filling and resanding to restore the neck pocket flush with the neck.

The colour coat will be Wimbledon White, which is a close-enough approximation of a slightly weathered/yellowed Oly White, and while I slowly finish the Allparts JM neck hitherto buried in my parts closet, I picked up a beat Greco Super Sound SE500 strat neck--sort of a twin separated at birth from user MatthewK's Tokai (?IIRC)-necked Mory.

Looking forward to getting this thing rehabilitated in the next few weeks!
Top

oh boy, I have a Greco SE500 and the neck is divine, great choice!
Top

Love the pearlescent scratch plates on these Mory’s. Nice choice of colour to complement it.
Top

I refinished my 62 Jazzmaster in Wimbledon white. It does a great job of recreating aged oly white, you won’t be disappointed. 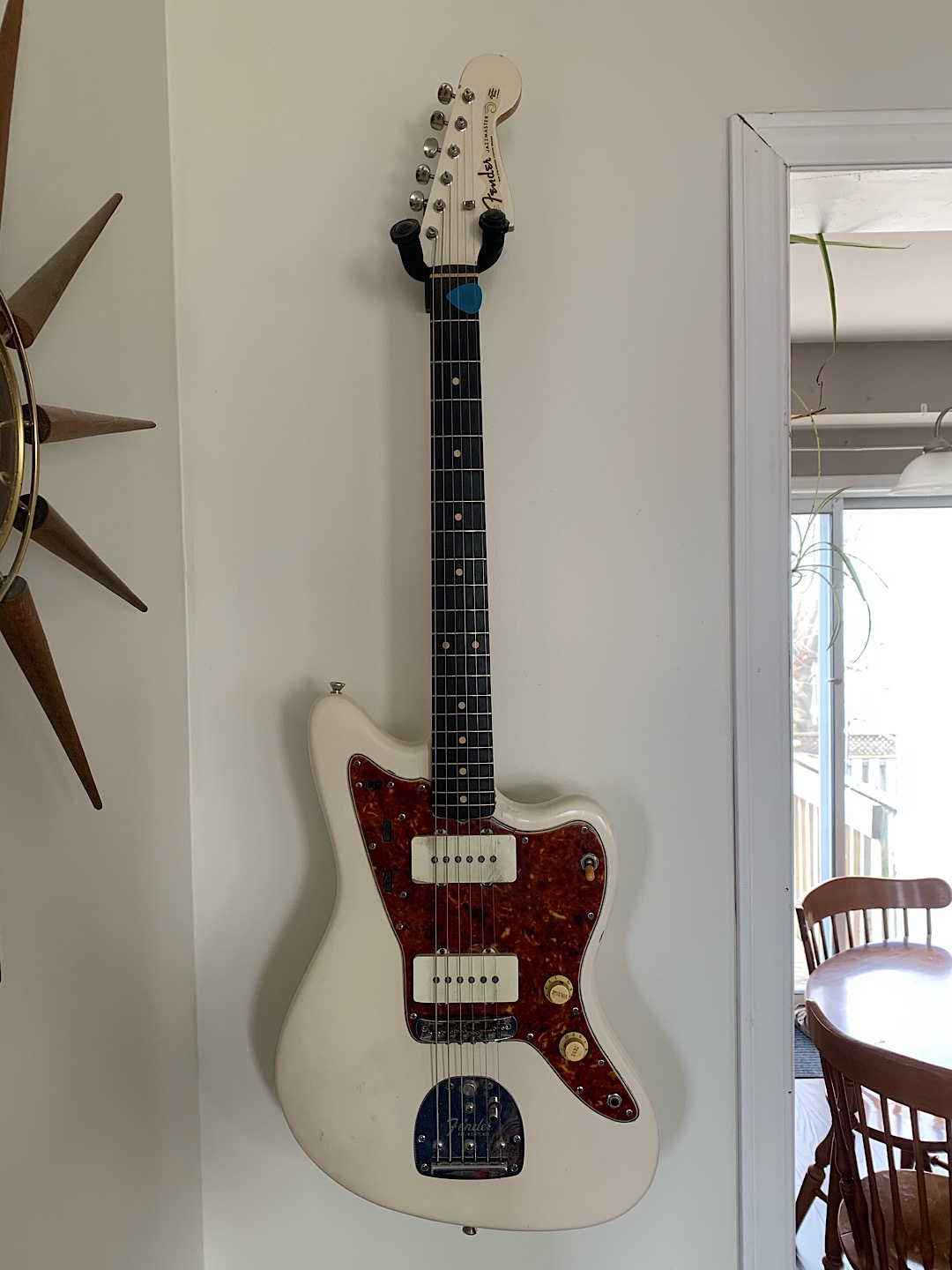