by Kinghat
Pretty much done with it now. Someone had refretted it sometime in the past, so I leveled and dressed the frets. Installed a .25 degree Stewmac neck shim and did a full setup on it. It plays like silk now. I ordered an assortment of tuner screws that reportedly came from a 1966 Musicmaster so I can replace one missing tuner screw. And that will be the final finishing touch.

by Kinghat
One more final touch: I bought two new three way switches and wired it according to a Premier Guitar wiring mod article. I like it way more than the original wiring. 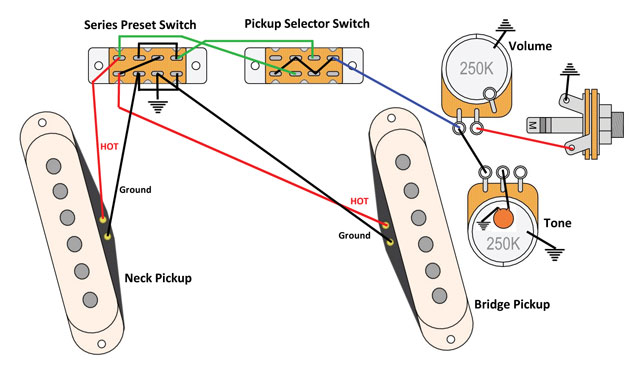 I also have a Mastery Bridge laying around that was for a future project, but I am going to use it on the Mustang, at least for a time.

by Trout
Marry me.

by Pacreamer
I have a 66 Mustang with nearly the same problem! It has most of its original Dakota Red but sometime in its life, it was left touching something hot. The owner at the time just put black paint what the what I assume was bubbled up red nitro. I'll see if i can post a picture soon.

What are the benefits of modifying the wiring?
All times are UTC-08:00
Page 5 of 5
Powered by phpBB® Forum Software © phpBB Limited
https://www.phpbb.com/