My friend inherited this guitar and sent me this image 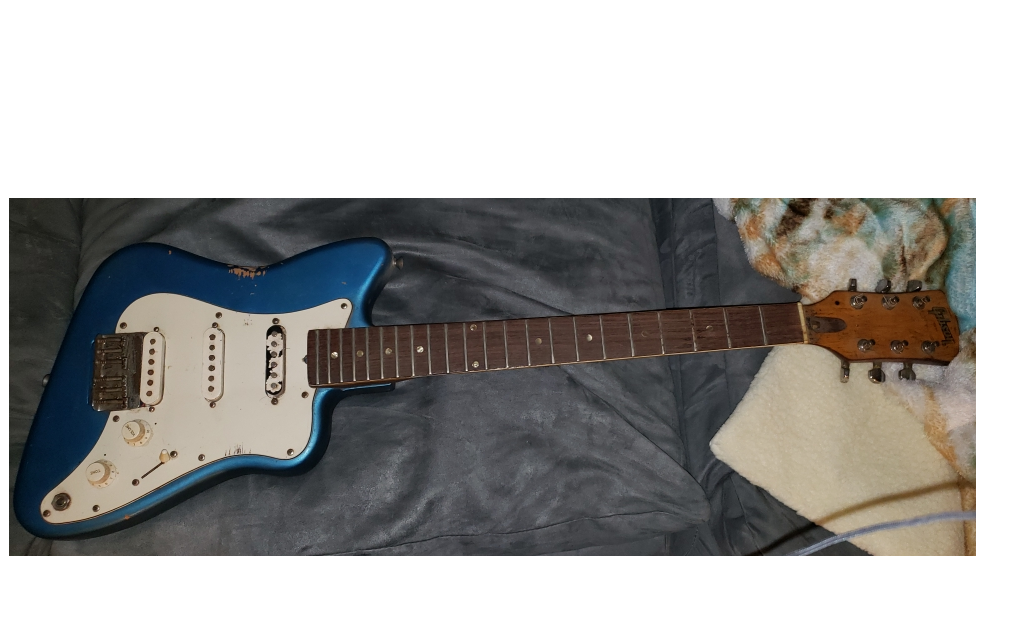 I think it's safe to say this was never a production model. A few people on here, or at least one, have made these mini-offset guitars by cutting a shape much like that out of the body of a Stratocaster and re-forming the pickguard, which looks a lot like what has happened here. Judging by the size and arrangement of the pickups, the seeming lack of one of those boat-output jacks and the hard tail configuration, probably not a real Fender either, but some affinity rather than a straight-up copy.

As for the neck, anyone's guess is bound to be as good as or better than mine, but Japanese or Korean bolt-on Gibson copy with a fake logo perhaps? Could also be that the bridge and bridge pickup have been moved forward/straightened to allow for the somewhat shorter scale in that case.
Science Friction burns my fingers
Electricity still lingers
Top

Epiphone (Samick) neck from an Epiphone Special bolt-on model, given the 12th fret layout.
Strat loaded pickguard like above mentioned, modded to fit, second tone knob replaced with a jack.
Body probably another import MIJ 70s if anything. Repainted.

Remove the pickguard and flip over to get pictures of the electronics and body cavities. If actual Strat then then pickups may be worth something.

Most likely an import copy from the late 60s to early 70s. "pre lawsuit" era. Ibanez made a lot of those guitars, but there were several Japanese factories at the time.

If your friend is hoping to sell the guitar for a windfall of cash ... that will be hard to do. I have a MIJ LP-like copy that I rescued from trash day and after putting a lot of parts in it to play it's worth not a lot more than it was when I got it.

Fixed up with a fret level and working electronics it could be a fun guitar to play though.

he's definitely not selling it, I haven't seen it in person yet. I want to set it up for him. I figure the neck isn't original, doesn't seem like a good match. He's a lefty, when I convince him to let me take it home I will set everything up upside down for him. I will let you guys know if there are any markings in neck pocket or under pickguard. I personally love the way it looks
Top
Post Reply
4 posts • Page 1 of 1