Good wee trip to Monorail yesterday - picked up the Gazelle Twin "Fleshed Out" remixes and Zos Kia/Coil reissue, both on vinyl. Years ago, the now-departed Echo Records on Byers Road had the Zos Kia CD in the bargain bin on the counter, and I wondered what it was. By the time I figured out I should probably buy it, the shop had closed down. Oops.
Kenny
Top

The first two of the 2017 Höga Nord Rekords single club releases turned up today and they are belters.
Jamie Paton - Telefuture and Mythologen - Rother.
Well worth the effort.
Top

wingnutkj wrote:Good wee trip to Monorail yesterday - picked up the Gazelle Twin "Fleshed Out" remixes and Zos Kia/Coil reissue, both on vinyl.

Couple of good choice there.


sammynb wrote:The first two of the 2017 Höga Nord Rekords single club releases turned up today and they are belters.
Jamie Paton - Telefuture and Mythologen - Rother.
Well worth the effort.

I'm in that bus too, I also really liked the Vox Low and Dark Strands 12's they put out recently.

shadowplay wrote:I'm in that bus too, I also really liked the Vox Low and Dark Strands 12's they put out recently.

You posting the link for that Vox Low 12" is how I ended up there and I figured if that was the label's sound the singles club would be worth a gamble, so thank you D, another good recommendation.
Btw how good is it they are 33rpm singles? It's like 7" eps of the 80s.
Top

This haul was waiting for me when I got home.

Sadly my train back from London was 1h40 late so I can't listen to any of it until tomorrow evening...

xx -> Coexist -> I See You -> Gish -> The Velvet Underground & Nico
First three are by The xx, the fourth is Smashing Pumpkins' debut, and the fifth needs no introduction here!
Top

NickD wrote:This haul was waiting for me when I got home.

Sadly my train back from London was 1h40 late so I can't listen to any of it until tomorrow evening...

What a trove, great picks! This isn't helping my VOD lust (vinyl acquisition syndrome?), nor the thumb screws of anticipation for my copy of that Astral Disaster RI to arrive, but I guess if it goes any faster, there'll be an astral disaster
Top

^^^
NickD, that's a very interesting bag you have there.

By the way, the Illegible one is Rhys Chatham -Pythagorean Dream
Top

OK it's really, really expensive but I would absolutely recommend having a look at the GAS Box set before they all sell out. I already had the records but I just couldn't resist.

Long-out of print, these are the most comprehensive versions of the essential GAS albums, including edits never before released on vinyl – the way they were intended to be heard, marking the 20th anniversary of Zauberberg, the iconic full-length that introduced the world to the trademark GAS sound

Wolfgang Voigt is a man of many means and monickers, having engendered a unique take on electronic expressionism across multiple media - from riotous early 90s acid to cyber-folkloristic techno or the abstract drama of his current Rückverzauberung project, a pioneering vision to be found on vinyl, canvas or flickering screens. Ranking among of the most dense, hypnotic, atmospheric recordings in his oeuvre, the GAS releases have since become internationally recognized classics.

From foggy dub techno to anthemic electronica and loop-based ambient techno, the list of acts, tracks and even genres influenced by the full-lengths and EPs crafted under the GAS umbrella between 1995 and 2000 seems endless, giving these long sold-out original releases even more of a near-mythical quality. Following the much-acclaimed (and out-of-print) retrospective NAH UND FERN from 2008, Kompakt has decided that it's high time for a reissue that features the core GAS albums originally released by the legendary Mille Plateaux imprint in the 90s – the records that introduced the project’s trademark sound between Schönberg and Kraftwerk, Wagner and the bassdrum, “an endless march through the underwoods of an imaginary, misty forest and into the disco.”

Inside this comprehensive anthology, listeners will experience ZAUBERBERG (celebrating the 20th anniversary of this essential album), KÖNIGSFORST, POP and the sought-after OKTEMBER 12", all together available as luxurious 10LP+4CD edition. GAS BOX is the most comprehensive version of these releases ever: the vinyl features edits that were previously unavailable on wax - with each album being presented as 3LP pressing (instead of the original 2LP pressings), for extended playtime and superior sound quality, finally released the way this music was intended to to be heard. This highly collectible box set comes with an art-print book featuring newly processed and previously unreleased photography from the Königsforst woods around Cologne, in the style of the legendary, trail-blazing GAS artwork.

Lovely loden cloth box, book of forest images (top right) which has 4 CD's inside the back cover and 10 records in total.

New GAS album Narkopopis due this month (and it's also ball kickingly expensive), the 17th year itch must be a thing now after Porter Ricks also came back after 17 years.

too bad Liveage vinyl doesn't have Sour Grapes like the CD version does...

Tuesday night's trip to my local friendly record shop turned up a couple of things I've been on the lookout for.

First up was Wolf People's Ruins, which has been mentioned here more than a few times. I think I read about them on here the week after they'd played Glasgow. Sod's law. Either way, I've been enamoured with Night Witch since then, and only put off buying the album mail order because I figured it's the sort of thing Monorail should have in stock. They didn't when I first looked for it, but this time, they did.

The other one was Ash Borer's Irrepassable Gate. I blow hot and cold with black metal, but I like this one, although I won't lie - the reason I stumped up for the vinyl is entirely because of the cover. I'm a massive fan of Glyn Smyth's work, and it's really great to see how his style is evolving: 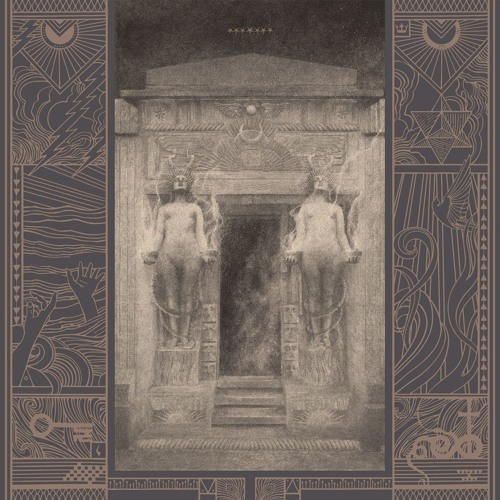 The gatefold image is amazing too:

A bit more information about it here.

Blonder tongue audio baton...I bugged the swirlies guy about reissuing it in another thread, and just got around to finding out that it was reissued last year. Oops.
Top
Post Reply
925 posts