Got stoned this afternoon before a thunderstorm and put on the In The Presence Of Nothing and it was hitting me pretty hard. It's like Isn't Anything era MBV doing Daydream Nation and forgot how much I enjoyed it.

Anybody else a fan of their early work? What gear did they use? Sounds like a Mustang or Jaguar through a Distortion Plus and maybe an old Tonebender?
Top

they're local so i kind of grew up listening and seeing them live and even being friends with various members (they've had a lot of members)
they actually developed a relationship /friendship with MBV in real life and have quite a strong bond with MBV
every lilys album has a different vibe and they've attempted so many different genres, but i love almost everything they've done
they ended up having a song in a Sprite commercial at one point, which is interesting
one time i was drinking at the bar and the guy next to me struck up a conversation. he was, at one point, one of many members of the lilys
and he was so drunk he ended up emailing me a bunch of unreleased lilys tracks ! i wonder if he regretted that the next day or does it every time he's at the bar ?!

not sure about what kinda gear, but i could maybe ask around...
Top

Was a bit obsessed with the Lilys for a while (as well as Swirlies). ITPON seems to get pigeonholed as an MBV ripoff, but I find it every bit as engaging and unique as anything they have done. It really should've put them on the map in a similar way, but maybe it was just a few months too late. Their subsequent albums were really interesting as well, getting more into Kinks territory among other things (oddly enough, listening to "Fancy" just now off The Kinks' "Face to Face" there's a bit of shoegazy-esque drone, so maybe there's more to that than meets the eye!). It's a shame they seem to have dropped off the face of the earth for the past 15-ish years.

Talked to Archie Moore way back when I saw Velocity Girl in '93 or so, but I don't recall any conversations about gear used. I did find this in a Reddit Post, though. 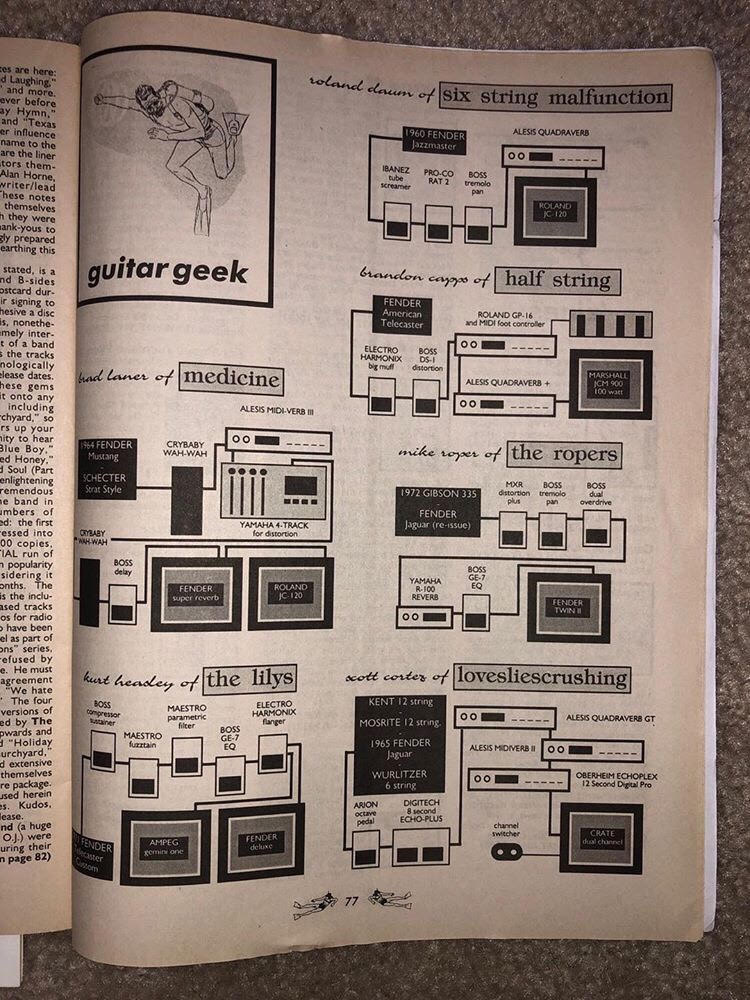 pedals i have no idea
i used to be cool
Top

I saw them play in the mid 1990s in Toronto at a small club and they were awesome.
Top

I love them! Here is a cool part time punks live set they did in 2017. I wish I could have seen them back when all those sick U.S. early-mid 90's shoegaze bands were around. Too bad I wasn't born yet..