It seems the other message board I frequent has picked up this thread.
Hopefully it won't cause a rift in the time space continuum!
Top

daemon wrote: ↑
Thu Mar 28, 2019 5:53 pm
It seems the other message board I frequent has picked up this thread.
Hopefully it won't cause a rift in the time space continuum!

Man that's weird, I'll not be reading it in case strangers are less than complimentary about my ramblings.

Btw todays hauntological daintee is The Hardy Tree - Stagdale which I was on ordering at 8.15 this morning. Sadly the flexi edition is sold out by the time I've got round to posting it here but the book and download version is still available. 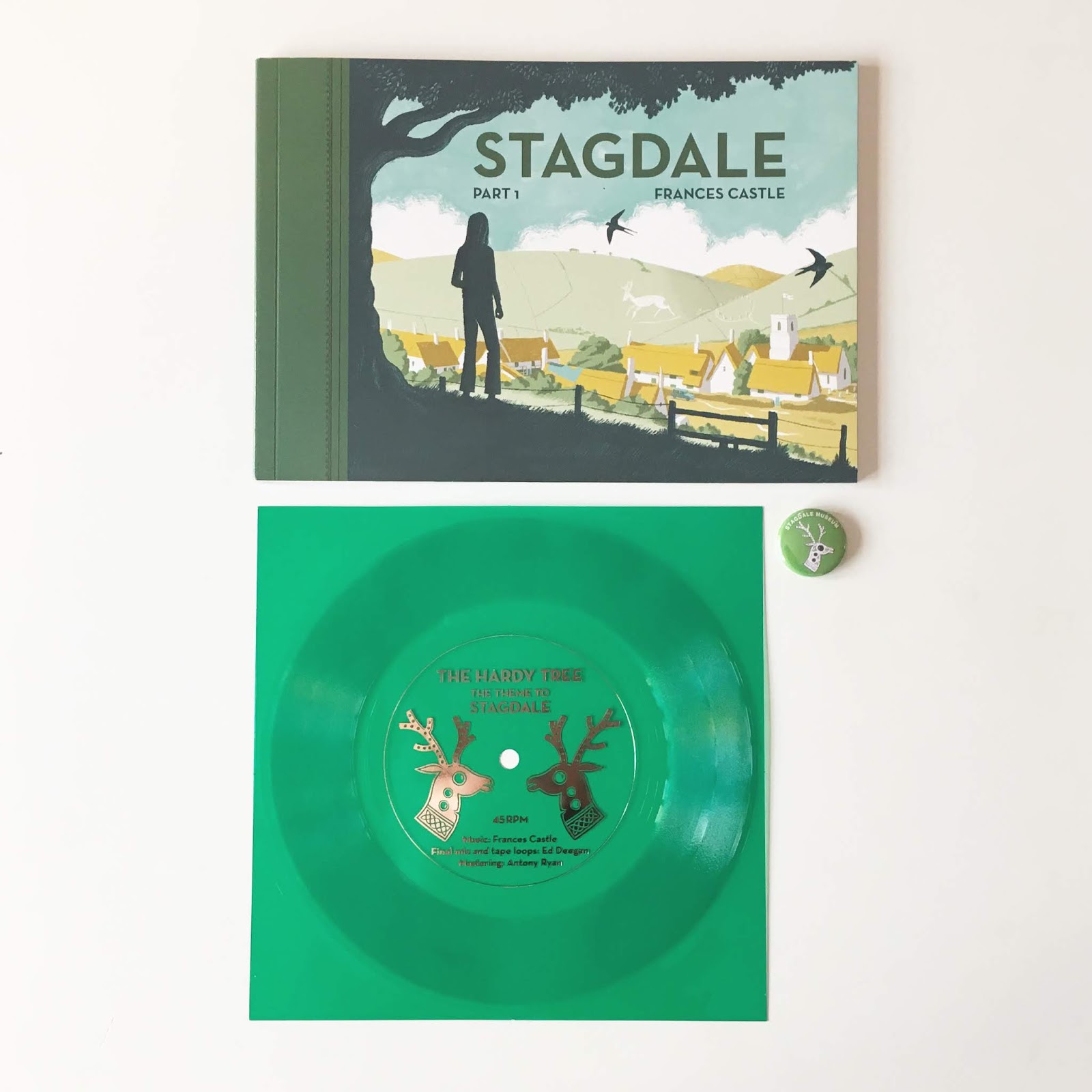 looking forward to that.

Might be worth pointing your ear trumpets in the direction of The Magic Ray. As is often the case I'm in two minds over this, on the one hand they are undoubtably retrofuturist but on the other hand it's a retrofuturism more informed by 60's instrumental music, exotica and reedy combo organ gargage. It's decent though, if a little arch at times and features more geetarz than most in this thread. The main guy must have a pretty full rolodex judging buy the remix talent he's had in and the cameos which include Kid Congo Powers.

I forgot to post something about The International Teachers of Pop, I saw them a couple of months ago and while they don't really fit in here they do feature to thread alumni Leonore from The Soundcarriers and a couple of stray Eccentronic Research Council members.

The record's OK but it's more retrofuturist library disko that makes me think more of Sisters of Transistors than anything on the first page. I certainly can't hear Age of the Train without having a vision of Britain's most prolific rapist.

IMO i didn't think they had the sort of live starpower, danse moves and tight fitting glitter hotpants bringing the gospel acording to disko requires but few people do when faed with a sparse audience and I was actually only there to see WomenSaid who are more of a genuine recommendation (but not really in this thread).

More on message is In the Instinct: A Study on Tension, Fear and Anxiety elpee I just got by Markey Funk. it's the sort of thing you could imagine sountracking an early 70's Polish knockoff of the Avengers and tracks like Chapter III. Clairvoyance wouldn't sound out of place on a Broadcast tour CD or a Pram elpee.

Btw the good doctor mezcalhead tipped us to the coming Jane Weaver ReWork record and hearing this really whets the appetite.

I've said it before and I'll say it again but that Seatman and Powell record which was Belbury Music 2 is a fucking belter and how it's not sold out is one of lifes many mysteries.

daemon wrote: ↑
Thu Mar 28, 2019 5:53 pm
It seems the other message board I frequent has picked up this thread.
Hopefully it won't cause a rift in the time space continuum!

Man that's weird, I'll not be reading it in case strangers are less than complimentary about my ramblings.

Hardly have to worry about that, everyone was very complimentary and thankful for your guidance. Seems to have fizzled out after a couple pages, but it's a more classic rock oriented board. Anyway, if you get bored sometime, stop by and post some thoughts, seems like you are linked into some really good artists, or at least of lot artists I like. And I checked and your username isn't taken yet either, it will be a smooth and painless transition. Just listened to that Seatman & Powell album today, that is nice

I'd recommend folk go and have a listen to the Ela Orleans 'Movies For Ears' compilation that's just out on Night School. I know there are a few Ela fans on OSG but perhaps this is an opportunity to mint some more.

Ela is a wonderful Polish musician who has seen fit to settle in Glasgow and her music is wonderful. I was going to say that her more recent music was less of a fit for in here but I put Circles of Upper and Lower Hell* on last night and found myself disagreeing with that assertion. However the period covered by this fits in a touch more snugly and will surely appeal to people with a soft spot for the likes of Pram (the drums are often very Pramesque).

Ela Orleans - Movies For Ears; An Introduction to Ela Orleans

Probably worth it for I Know alone which is a song off a split with Dirty Beaches and an old favourtite of mine.

*no time for a whole record; Ela Orleans: You Go Through Me (with a ouple of stray Pastels)
Gott in Himmel!
Top

Oh and literally just opened the new Art of the Memory Palace - Dusk at Trellick Tower, which is a collaboration between Andrew Mitchell (Idlewild) and Raz Ullah (Jane Weaver), which is out on the ever reliable Static Caravan.

Art of the Memory Palace - Wretched Mortal and shop samples of the whole thing at Boomkat.

Their last album "Voiture Blanche Dans Le Noir" was an excellent soundtrack to a film that doesn't exist but sounds like it should.

Anja A Paměti Lidi (Anja And The Memory People) Original Soundtrack to the Czechoslovakian psychological TV drama, Anja & The Memory People (not really). Came as a tape but you can bandcamp the file.

The Assistant (when he's not talking Czech) has five or six very limited singles or split releases on the delight that is Polytechnic Youth but those would be long gone in the microscopic chance anyone was interested. Of course he is a man of many faces; Oliver Cherer, Dollboy, The Wrestler, Australian Testing Labs, Gilroy Mere etc

Just remembered a few things I bought that might go here, I'd dab them in later if i find some motivation down the back of the sofa.

I like that Art of the Memory Palace thing. I need to investigate further. I suspect that this might sound a little foreign to you, but I've hit a dry spell with new music. No serious purchases in the past few months, though I have been checking out shared links that people are kindly providing.

However: I won't give up! I know something will eventually arrive that floats my boat.

Really like the new one now I've had a proper listen. I think the track with the video is the least of them, the best is the two part title track IMO.

shadowplay wrote: ↑
Fri Mar 29, 2019 2:31 am
Btw todays hauntological daintee is The Hardy Tree - Stagdale which I was on ordering at 8.15 this morning. Sadly the flexi edition is sold out by the time I've got round to posting it here but the book and download version is still available.

Just finished reading part one, it's lovely. I'm hooked on the story so I hope the momentum keeps up and it all gets published in the end.
Distance-crunching honcho with echo unit.
Top

shadowplay wrote: ↑
Fri Mar 29, 2019 2:31 am
Btw todays hauntological daintee is The Hardy Tree - Stagdale which I was on ordering at 8.15 this morning. Sadly the flexi edition is sold out by the time I've got round to posting it here but the book and download version is still available.

Just finished reading part one, it's lovely. I'm hooked on the story so I hope the momentum keeps up and it all gets published in the end.

Yeah it's good, I'm sure she'll see it through. She's been blacklisting supercunt speculators who've been trying to get £250 for Stagdale on EBay. It's a shame folk who actually wanted to own them lost out to these people, especially when claypipe seem to price so reasonably compared to rawk grandees bang average releases that are pressed in their thousands and often a tenner more.

"Amongst Britain’s trees there are thought to be over 3,000 ancient oaks – those which date back 400 years or more – and of those trees more than 115 are 800 to 1,000 years old or more. They are part of a tree population that also includes ash trees that have lived for hundreds of years and a yew that is estimated to be between 2000-3000 years old or possibly many thousands of years older and that some consider to be the oldest living thing in Europe."
Distance-crunching honcho with echo unit.
Top

Okay, it appears as if no-one has posted this already, so for those interested in the scene around Broadcast in their earliest incarnation, The Noise Made By People could be interesting viewing.
Top

Maybe this belongs here too...? (Or should it be in the 'Woodland' thread?)
Top

I love that this thread exists. I now feel like I must be in the right place for me. As soon as I saw all the Ghost Box stuff mentioned in the first post along with Le Superhomard.